The Saptashrungi Devi temple is located at Vani near Nashik in Maharashtra. This temple is one among the 51 Shakti peethas located on the Indian subcontinent. The Devi is said be swayambhu (self-manifested) on a rock on the sheer face of a mountain. She is surrounded by seven (sapta-in Sanskrit) peaks (shrunga-in Sanskrit), hence the name- Sapta Shrungi Mata (mother of the seven peaks). The image of the Devi is huge-about 10 feet tall with 18 hands, holding various weapons. The idol is always coated with Sindoor, which is considered auspicious in this region. 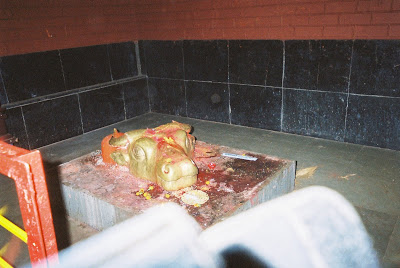 She is believed to be Mahishasur Mardini, the slayer of the demon Mahishasur, who took the form of a buffalo. Hence, at the foot of the hill, from where one starts climbing the steps, there is the head of a buffalo, made is stone, and believed to be that of the demon. It is believed that the Devi Mahatmya, a sacred book which extols the greatness of Devi and her exploits was composed at this place by the sage Markandeya, who performed rigorous penance on a hill opposite the one on which the Devi resides, which is now named after him.

The temple, which sort of sticks to the cliff, is 1230 meters above sea level. There is an old path with steps cut out of the mountain, which starts right at the foothills, at Vani and goes all the way to the mountain. However, now, a motorable road has been built, which goes up to an altitude of 1150 meters. From this place one has to climb around 500 steps to reach the shrine, which only takes about forty five minutes. For those who cannot climb even this, there are “dolis” (chairs carried by 4 people) available at Rs.200/- for the two-way trip.


Update: 24th August, 2012: I recently visited the temple once again, and there have been a few changes. There is now a separate set of stairs for climbing up and coming down, and this has considerably made things easier and less confusing. Also, many readers had asked me about the proposed ropeway. Yes, there is a ropeway, but it is only meant for goods, not for people. There are still dolis available, though the rate is now higher - Rs. 400 to 500, depending on how well you can bargain. There is also a Bhakta Niwas, and also some other hotels and lodges, but I was unable to get any more information due to time constraints. You can read my new post to read a more detailed account of my experience.