Jodhpur- A Journey into the Past

November 26, 2007
The first thing that strikes you when you come out of the railway station at Jodhpur, is the aura of bygone days the place still manges to have, Of course, the old havelis have given way to modern buildings, but the city eludes modernization. In fact, this seems to be quite common in Rajasthan, which has more heritage hotels and resorts than any other state in India. We ourselves were staying at the Ajit Bhavan Palace hotel at Jodhpur. The hotel is affiliated to RCI Holidays, of which we are members. It is a well maintained hotel, which makes you feel like royalty. It was an enjoyable and unique experience, which I shall never forget.


The Ajit Bhavan is supposed to be one of the earliest heritage hotels in India, which has pioneered heritage tourism in the area. Today, Jodhpur, and indeed almost all of Rajasthan are filled with heritage hotels. Some of them are simple havelis, while some, like the Umaid Bhavan in Jodhpur, are magnificent palaces, which speak volumes of history.


The Umaid Bhavan palace is divided into 3 parts- one, where the erstwhile royal family still lives, one which has been converted into a hotel, and one which has been maintained as a museum. The Rajputs were brave and intelligent warriors at one time, known for their lavish living, their hospitality, and their loyalty. They have proved their intelligence, and a keen understanding of the ways of the world, by making the most of what they possess. It is an admirable quality indeed, something which is lacking in most other parts of India. Of course, there is another viewpoint. As a guide in the museum put it to me, "The royal families only wanted to keep themselves safe, and maintain their standard of living. It did not matter to them , to whom they owed their allegiance.Before the British rule, they fought among themselves, taking care not to destroy the forts and palaces, which could be used for their own comforts. When the British took over India, the kings found that it was easier to give in to them, and live with all their luxuries, rather than fight and risk losing everything they had. " That is probably why so many forts and palaces in these areas are practically intact,while most of those in places where the rulers opposed the British , stand today in ruins. 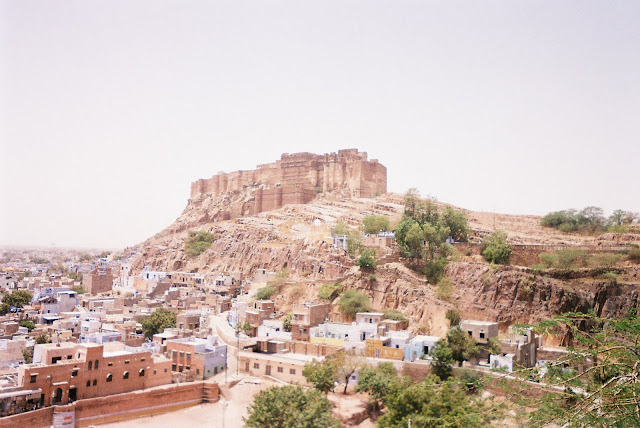 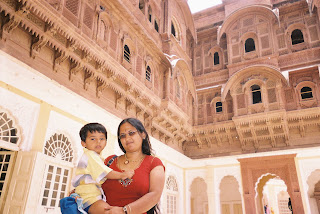 Of course, as tourists, we are not really interested in right and wrong, only thankful to those people who created and have maintained such beautiful places for us to see and relish. If it weren't for such places, one would never know what India was like before British rule, when kings ruled kingdoms that are now just small districts, or cities. All I know is that when one stands in the Mehrangarh Fort in Jodhpur, one can feel the magnificence that was India in the past. It is impossible, not to imagine what it would have been like , in the days of yore. The fort has, on display various interesting things, like weapons, armour, different types of Howdahs, saddles,palanquins and most interestingly, a special type of palanquin used when the queen went abroad for the very first time. As a woman, I found it interesting that there were so many types of palanquins used- some for moving within the walls of the fort, some for going into the city, some for special occasions, and as I mentioned , one for going abroad. The only thought that struck me was that if the women moved around in palanquins all the time, and never set a foot on the ground, and with the variety of food that was prepared in those days, how did they manage to maintain themselves as well as they did , as it was apparent from the photographs ? Of course, the answer was provided to me there itself -- they exercised ! and rather strenuously too, it seemed , for ,on display were different kinds of instruments -- weights, dumbbells,etc. for special use by the women! and they were all jewelled too !!! There are many places of tourist interest in Jodhpur, apart form the fort, like the Jaswant Thada, which is the royal cenotaph, built in memory of the Raja Jaswant Singh II. An imposing edifice in marble, the place is filled with the reverence which the locals have for their king. It is also interesting, as it contains the cenotaphs of many others of the royal family, and is an interesting study for those interested in studying the royal lineage. 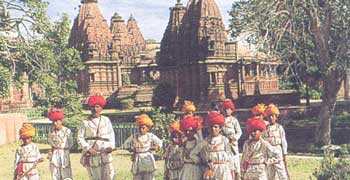 Mandore, the ancient capital of Marwar, is another interesting place where there are cenotaphs of the ancient kings, and most interestingly, sixteen gigantic figures, carved out of a single rock depicting various Hindu deities. Here, there are vast gardens, well laid out, and is a popular picnic spot. There are lots and lots of monkeys and peacocks, and for the amusement of the younger tourists, an amusement park. I just say that it is a brilliant idea, as my son, then 3 years old, was so bored with my pulling him from one fort or palace to other, that he enjoyed himself thoroughly, and refused to leave!!

Another place to keep small children occupied is the zoo , which is like any other zoo in India, There is nothing very special about it, but there are animals and birds, and children love them. Do make it a point to travel in the local autos and the horse drawn carts, as they lend a genuine feel and local colour to the heritage tourism. 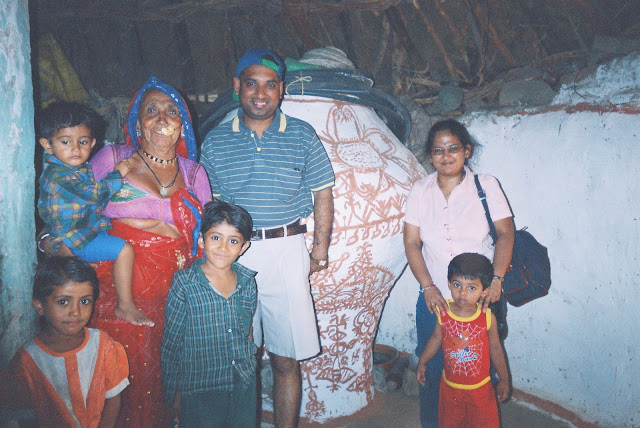 Part of the heritage tour is a visit to the villages nearby. The most popular one is to a Bishnoi village. Bishnois are a tribe very close to nature, who have taken an oath to preserve nature. They very determined in their pledge, and in fact, they have become quite famous lately due to the case of poaching they have been fighting against prominent film stars who have been shooting deer in the area. Their love for nature is quite visible, and it is quite visible that deer and peacocks feel quite comfortable with them around. As one drives to the village, one sees lots of deer and peacocks, which run away the moment they hear the sound of the vehicle. For me and my son, it was our first experience in a village, and we were amazed at the local practices. My husband took up the offer of a hookah, which the village elder was smoking, much to my consternation, and the others' amusement.


We were to have lunch in another village, at a weaver's house. As one who loves to stitch knit and embroider, I was awed by the dexterity of the weavers. The beautiful patterns seemed to grow under their fingers as they worked ! We ended up buying a carpet, which today takes the place of pride on occasions .The simple local food they served us was delicious, ad we relished every morsel. Even my son, who, at that time, had to be fed by me, ate a whole Bhakri by himself ! 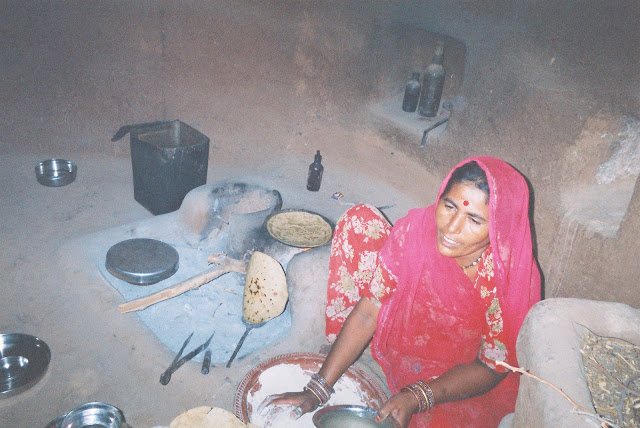 We also visited other villages, that of a dyer, and a potter, and at both places found ourselves awed by the sheer talent of these simple villagers.


As a heritage holiday, Jodhpur certainly gets full marks from me. It makes me wonder what Jaipur, supposed to be the mecca for heritage tourists will be like. It makes me want to read more of history. In fact, I sort of wished I had paid more attention to history when I was in school!