June 11, 2008
The Annapoorneshwari temple at Horanadu is a famous one, and is on the itinerary of most people who visit Mangalore or Sringeri. Horanadu is about 2 hours away from Sringeri, and is an extremely beautiful temple. The idol of Annapoorneshwari is life size, and covered with gold from head to toe. This is quite an ancient temple, and is regarded as the kula devathai, or the household deity of many people residing in Chickmanglur district. 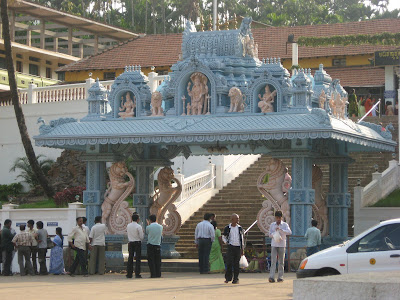 The entrance to the Horanadu Temple

Just half an hour away from Horanadu is the temple of Kalasa. This is a temple on a hill, on the foothills of which flows the Bhadra River. This place seems to be a picnic spot, as it was filled with people even in may when there wasn’t that much water in the river. One has to climb a few steps to get to the temple. At the entrance of the temple are the statues of two elephants, regarded to be Ganesha and a she-elephant, his wife. It is believed that there was an Asura here, to kill whom, Ganesha descended on earth. The magical Asura took the form of a tree, and Ganesha assumed the form of an elephant to uproot him. Seeing the struggle, a she elephant in the forest came to help, and along with Ganesha succeeded in uprooting the tree and putting an end to the Asura. Since he had touched the she-elephant during the fight, Ganesha married her, and decreed that she should take her place by his side at this place. Both the elephant statues look identical, except that the male one is depicted as trampling the Asura beneath his foot. The idol of kalaseshwara, a lingam, is believed to be Shiva who manifested himself in a kalasam, a vessel in which water is kept, to the great rishi, Agasthya. 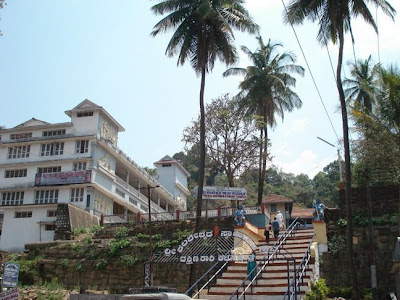 Both these temples are quite well known, and are visited by a great number of people. However, the internet is a great place to find new places and temples, and one such is the Annapoorneshwari temple at Hosanadu. I read about this place on the net, and added it to my extensive list of temples to visit. Right from Gokarna, I kept enquiring about it, but no one seemed to know. Finally, at Udupi, the taxi chap told us that he knew the place. Unfortunately, Udupi was too crowded, and we got a room only for two days, and had to leave for Sringeri. Thankfully, the car driver at Sringeri also knew the place, and we visited it on our way back from Mangalore.

The Durga parameshwari temple at Kateel is about an hour away from Mangalore. This temple is a beautiful one that I shall never tire of visiting. The temple is on a small island on a river, and the idea of the goddess killing a demon here adds a touch of adventure to this place. For the best experience, one must visit it in the rains, when the river is in full flow.
Hosanadu is just half an hour away from here. From there, Sringeri is 2 hours away. The temple is on the route from Kateel to Sringeri.

The Hosanadu temple is a newly built one, built by a local family, who, after one of their regular visits to Horanadu got the inspiration to build an identical temple in their village. The idol of the goddess looks identical to the one at Horanadu, except that here, the bowl and spoon that she is carrying in her two arms ( to serve food), are more clearly visible than at Horanadu. The temple complex is huge, and they have ambitious plans for it. Already, a huge statue of hanuman carrying the Sanjeevani Mountain has been installed, a go-shala (cowshed) with a number of cows exists, and there is also a mini-zoo with a few birds and deer. They have also built a huge hall for discourses, and are building one for serving food. This temple, though new, is also worth a visit.

If you are traveling from Mangalore to Udupi, via Kateel, do visit the temple of Durga Parameshwari at Bappanadu. We were unable to visit the temple due to lack of time, but I have read about this temple also on the net.

My blog is aimed not just at describing my experiences, but also to provide information to the many others like me who search for information on the net before starting on a trip, and many religious minded people who want to visit temples for various reasons. Hence, if any of you have any more information on any of the places I have mentioned (or have missed out), please do add your comments, or send me a mail.