Thiruvananthapuram has lots to offer apart from temples. The museum complex which has a museum, an art gallery as well as a zoo and lots and lots of free area for kids to run around without getting in anyone’s way is a wonderful place to spend the entire day.
Timings: 9 AM to 6PM, Monday Closed
Napier Museum 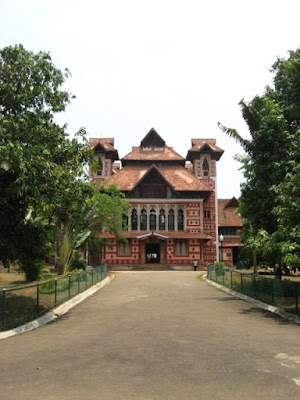 The Napier Museum was established in 1855 by the Maharaja of Travancore. The museum houses some beautiful works of art, archaeological artifacts, idols and ornaments. We started out with the intention of visiting this beautiful museum, which we had been told was worth a visit, and ended up spending so much time in the zoo and the art gallery; we had no time for the museum itself! 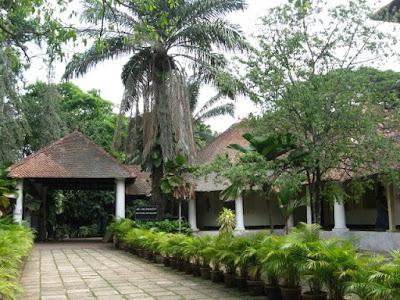 The Sri Chitra Art Gallery is located within the compound of the Napier Museum, and, as the name suggests, houses some beautiful works of art – prominent among them being some paintings of Raja Ravi Varma, probably the most talented and well known son of this state. There are also paintings by other famous painters, as well as some Tanjore paintings, and reproductions of the paintings which adorned the ceilings and walls of the Travancore Palaces. Cameras and mobiles are not allowed inside the gallery. 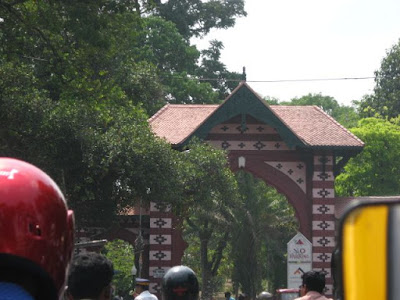 Entrance to the Museum Complex

The zoo was something Samhith was eagerly looking forward to, and it certainly did not disappoint us. Established in 1857 by the Travancore Maharaja as an annexe to the Museum, it is one of the oldest zoos in India, and also among the better maintained ones. This is also situated within the Napier Museum compound, and is spread over an area of 55 acres. Most of the animals are kept in open enclosures, except, obviously the birds (which, I regret to say, present a sorry sight). We spent almost 2 hours in the zoo itself, and rushed through towards the end, promising Samhith to bring him again on a more leisurely visit. So, without wasting any more words let me take you on a visual tour of this zoo. 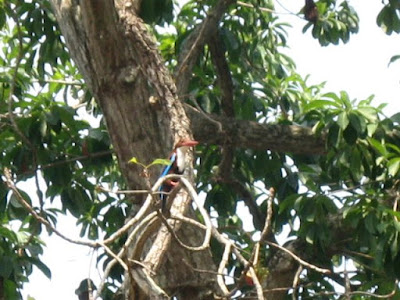 We saw this bird as soon as we entered the complex. It is so wooded, you can see a variety of birds outside the zoo itself 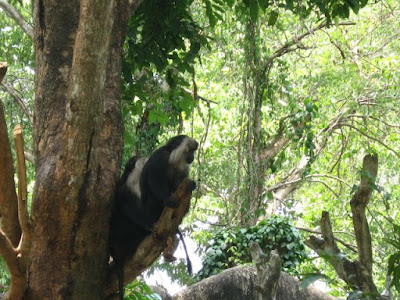 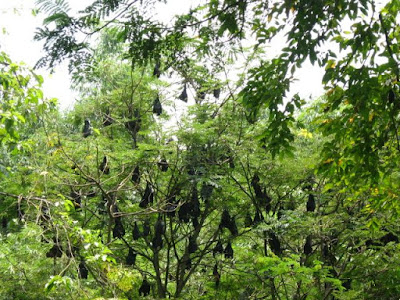 Thousands of Bats on trees - in the afternoon... wish I had taken a video so that you could have heard the racket they were making! 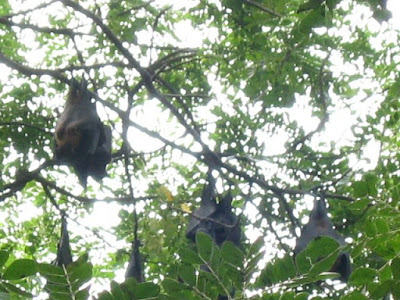 A closer look at some of them 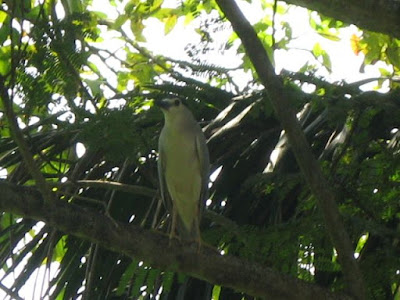 This might be a stork billed Kingfisher, but I am not too sure. If anyone can enlighten me, I will edit this post to include the name of this bird. The same goes for all other birds in all my posts. We sw this one inside the zoo, but it was freely moving all over the area. 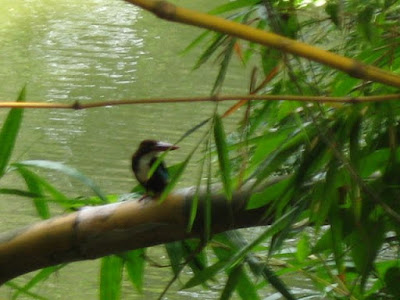 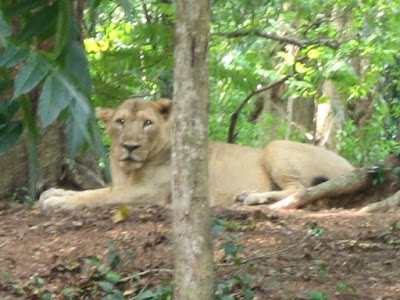 The Queen of the jungle... in the area assigned to her... not enclosed in a cage, but by a moat full of water...... The King didn't want his photograph taken, and moved away when we approached. 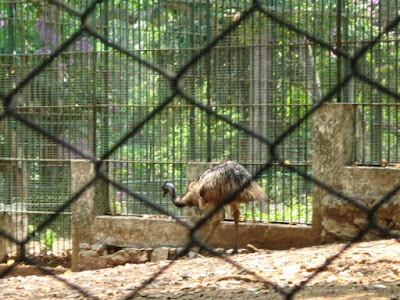 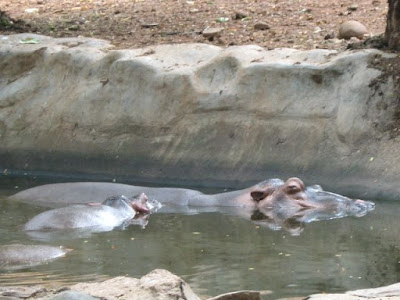 A Hippo family cooling off in the water.... 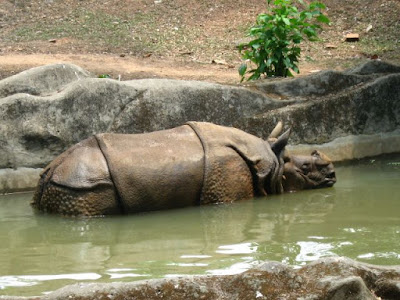 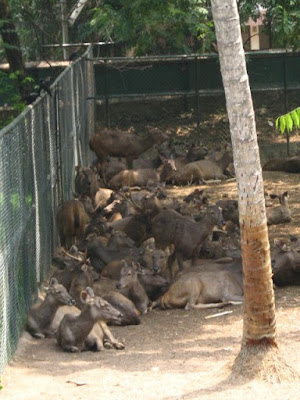 .. while the deer seek some relief in the shade. 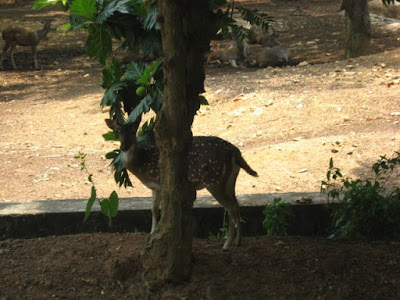 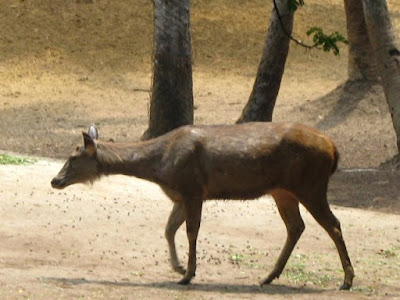 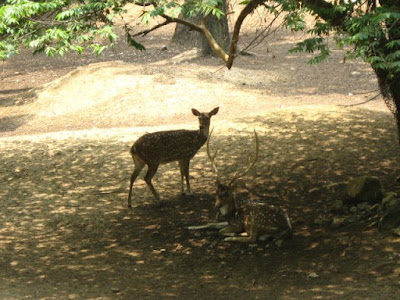 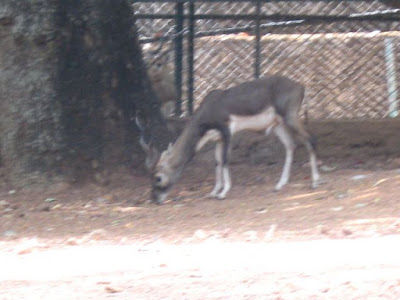 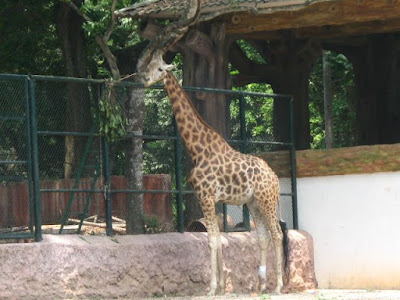 The first Giraffe Samhith has ever seen........ 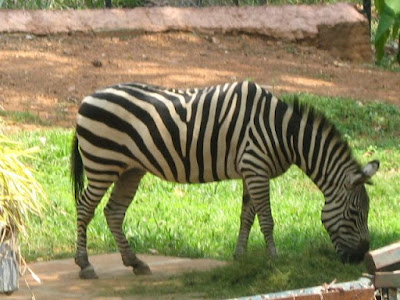 His first view of a porcupine... 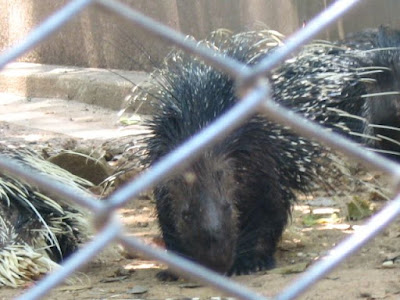 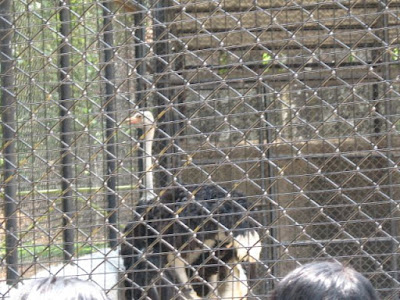 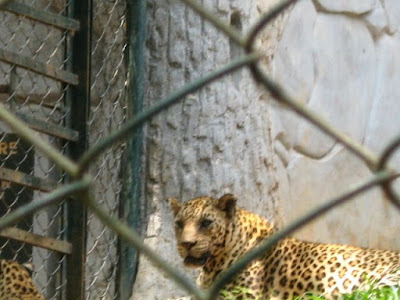 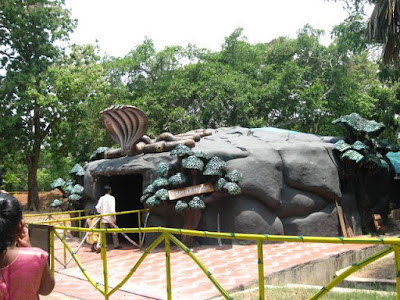 The Snake House - this was the most dispiriting part of the entire zoo (along with the bird section of course, where I did not take photographs). The sight of the sad looking snakes in the glass enclosures reminded me of the first book in the Harry Potter Series (The Philosopher's stone), where Harry unwittingly releases a snake from its enclosure.... and I wondered what would happen if it really came true!!!! 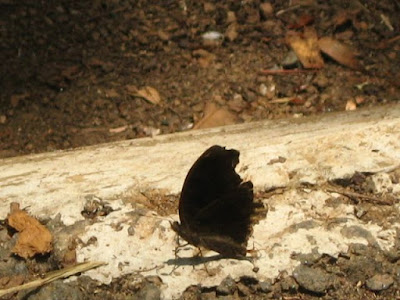 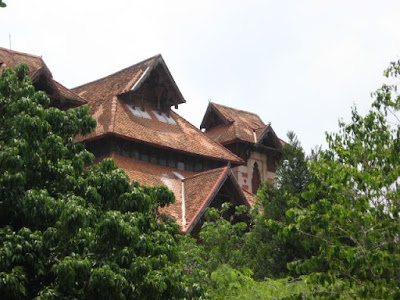 A view of the museum through the trees

Another entrance to the Napier Museum 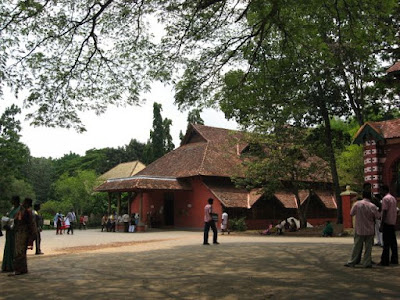 The office of the museum complex

Disclaimer: those of you who have been to zoos abroad may not be too impressed by this one, but my comparison is with the zoos in India, most of which are absolutely awful, especially the ones in Bombay. The Mysore and Delhi zoos are the best I have visited so far, and Trivandrum is at least comparable to them.