Tirupati Part 3 - The Museum - a surprise!

December 02, 2010
On my (almost) dozen visits to Tirumala, I have passed by the museum countless number of times. It happens to be located very near the hotel where we go to eat, and I always wondered if it was worth a visit. This time, we had plenty of time on our hands, and since it was pouring, we thought it would be a good idea to visit the museum. For one thing, we would be indoors and sheltered from the rain, and if it wasn’t all that interesting, we could sit down and rest our weary legs. As it turned out, we spent almost 3 hours at the museum, we didn’t even sit for a minute, our legs were wearier then ever by the time we came out, and yes, the rain had stopped too!

Unfortunately, cameras aren’t allowed inside the museum, a fact I knew already, and thoughtfully left it behind in the room. So no pics, just my descriptions! The pic of the museum provided is from the net, not my own.

Overall, if I were to describe the museum, there is nothing I can pinpoint as unique. It is full of artifacts, rare or not I am not in a position to say. There are sculptures, most of them broken, found in the vicinity, at the temple as well in the surrounding areas. Some of them are interesting archaeologically, and some are just beautiful. There are umpteen idols of Lord Vishnu, and one can see the changes in the styles over centuries. While some are rough and coarsely carved, some are so elaborate and delicate that I could scarcely tear my eyes away.


There are separate sections for the sculptures, wooden doors, arches, and such relics of the ancient temple, as well as photographs. There are old photos of the hills showing the different temples and places of interest, and there are replicas of bronzes which are still inside the temple, and there are pages and pages of information on the history of the temple and all the kings who patronized it.There were beautiful items which had been presented by various kings and were once used at the temple, among which I especially liked a palanquin made almost entirely of ivory – it wasn’t the ivory that made it beautiful – it was the entire Ramayana and Bhagavatham which were carved into the sides which made it absolutely peerless! It was fascinating; to say the least, and even Samhith came along without complaining, frequently going on ahead and then calling out “Amma, Amma, come here! See this!”


But if you ask what I shall remember from all the interesting things we saw, I would say – the models of the temple! There are plenty of models of the temple in the museum, from tiny ones to huge ones, and there is also a model of the seven hills and the climbing path. Both, Samhith and I were so captivated by the simplicity with which the temple models had been made that we have decided to try it out for ourselves. So now you know what you are going to see for Navaratri next year! We have even brought back a miniature model of the temple’s gold covered gopuram (which is available at all shops) and a small figure of Lord Venkateswara to keep inside.


However, there is something else the museum opened up to me. There are references to the legends of the temple, and an attempt to explain them from the view point of history, as well of science, which is rather interesting, considering that temples usually try to keep science and rationalism as far away as possible to avoid confrontations!


The first thing which drew my attention was the figure of Varaha moorthy – or Varahaswamy – the third incarnation of Lord Vishnu, in the form of a wild boar. 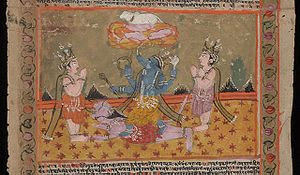 Legend tells us that Varaha brought the land out of the sea where it had submerged, and hence this land belongs to him. The placard placed here had an interesting point to make – from what we know of ancient geography, and from geological studies, the Eastern Ghats (of which these hills are a part), are older than the Western Ghats, and are believed to have originated at the time when the supercontinent of Rodinia is believed to have disintegrated and the supercontinent of Gondwana formed. The collision of two huge masses of land is said to have pushed the land from under the ocean to rise up and form these huge mountain ranges. Now compare this to the story of Varaha – bringing up the earth from the bowels of the sea, and it appears like someone trying to explain a geological event, which few understand, in terms of mythology, which everyone accepts easily! The placard was the first glimpse I had of the TTD (or at least someone there) trying to give some rational explanation of the legends, something I really appreciated.


This was just the beginning, for I found more interesting things as I went along… for which you have to read my next post!