December 20, 2010
Now that we have completed a tour of the Tirumala hills, it is time to come down and tour the foothills. There are several places of interest here, of which we will begin with the local temples. 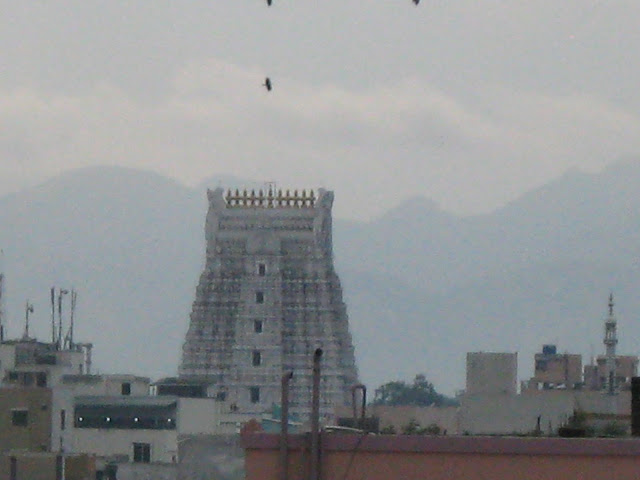 This is the first temple to be visited on a pilgrimage to Tirumala. As I have already mentioned in an earlier post, Lord Govindaraja Perumal or Govindaraja Swamy is considered to be the older brother of Sri Venkateswara. He was given the duty of counting the donations at the hill temple, and was so tired that he lay down to sleep with his head on the measure he used to count the earnings! This is the posture in which we see him in the sanctum.


Interestingly, the temple is one of the few where we see the Lord in more than one posture. In an adjoining sanctum is the Lord as Parthasarathy – the divine charioteer, in seated position with his wives by his side. Further along is a smaller sanctum of Kalyana Venkatramana Swamy in standing posture, so this temple has images of the Lord in all the 3 postures!


This is a huge temple and deserves a few hours for itself. I have roamed all over the temple several times, but since cameras are not allowed inside, have never been able to indulge myself or bring you some interesting snaps.


For a detailed account of the temple, check out a fellow blogger’s post on the temple at
http://travelwithgs.blogspot.com/2010/08/govindaraja-swami-temple-in-tirupati.html

Located about 5 Km away from Tirupati, Tiruchanur is the abode of Padmavati, the wife of Lord Venkateswara. A visit to Tirupati is considered incomplete without a visit to the temple of the goddess. This is another beautiful temple, but again, all I can show you, is a view from the outside. 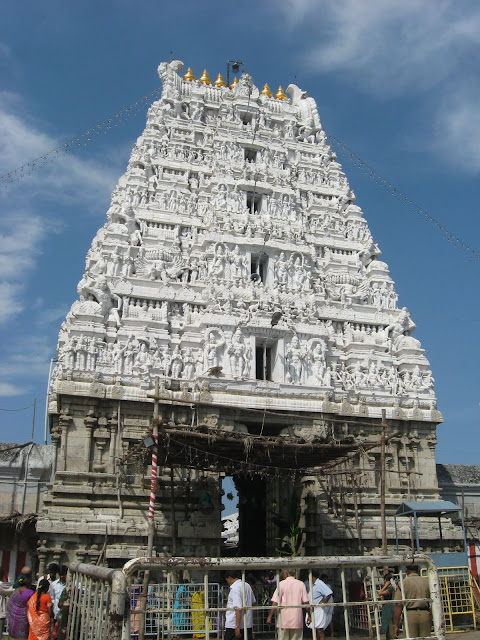 I have already written about this temple, so for more details, see the following links: 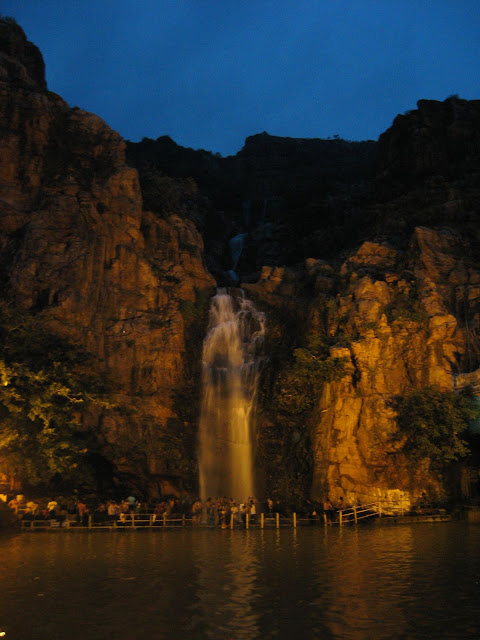 The Kapileswara Swamy temple is the only Shiva temple which is considered to be part of the Tirupati pilgrimage. This temple is located right next to the Kapila Teertham, which I have already written about in my earlier post.


It is believed that this is where the sage Kapila was blessed by Lord Shiva, and the lingam here is a swayambhu. The sage himself is believed to be an incarnation of Lord Vishnu, and thus this temple is patronized by both Shaivites (followers of Lord Shiva) as well as Vaishnavites (followers of Lord Vishnu).
In earlier times, devotees used to bathe in the Kapila teertham before climbing the holy hills, and even the footpath for the ascent used to begin here. However, the hill being steep here, it was quite a difficult climb, and hence, the steps were moved to the present location near Alipiri.


For more information about this temple, go to

All over Tirupati are images of Lord Venkateswara, standing all by himself. At very few places is he seen with his consort. One of these is the temple at Srinivasa Mangapuram, about 12 Km from Tirupati. Here, the Lord is seen as Kalyana Venkatramana Swamy, with Padmavati by his side. In Tamil, Padmavati is known as Alarmel Manga or Alamelu Manga (all the names essentially mean ‘the lady on the lotus’, referring to the legend that she was found on a lotus), which is why the place is known as ‘Srinivasa Manga puram’.


It is believed that the Lord stayed here with Padmavati for 6 months after his marriage, for it was forbidden for a newly married couple to ascend a hill. Quite a practical ban, considering that in those days, these hills were covered with jungles and wild animals, and that it was a dangerous matter to climb them.


This temple is also quite near the only other active walking pathway to the temple – the Srivari Mettu, which is considered to be shorter, as well as much more picturesque than the more common route via Alipiri. However, there are a few restrictions on this route, such as the time, for it opens at sunrise and closes at sunset, unlike the other path which is open 24X7 and is full of people even in the darkest hours of the night!
Tondavada Agastheeswarar temple 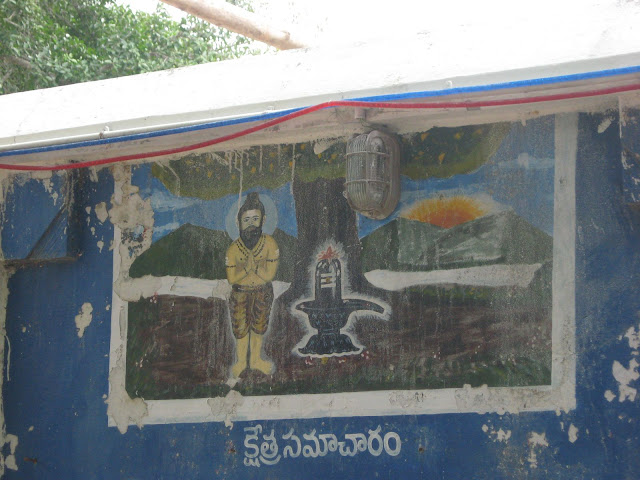 The temple of Agastheeswarar at Tondavada is very near Srinivasa Mangapuram. This is believed to be the site of the ashram of Sage Agasthya, who was blessed by Lord Shiva here. This is one more Shiva temple in the vicinity related to the Legend of Venkateswara, emphasizing the merging of Shaivite and Vaishnavite faiths. It is believed that after his marriage, Lord Venkateswara and Padmavati came here to obtain the blessings of the sage, and stayed on near his ashram for the period of six months. 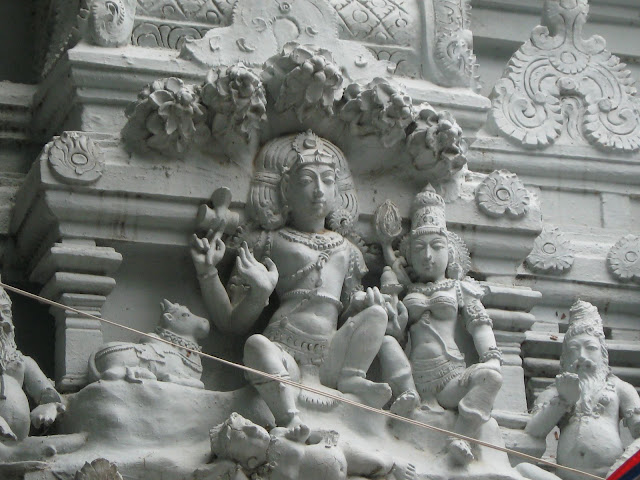 This temple lies on the banks of the Swarnamukhi river, which never has any water when I visit. The first time I visited this temple was in May last year, and the river bed was dry and hot, and it was like stepping on hot coals as we walked across the river bed to a small shrine at the centre. Here, in this shrine, are the footprints of Lord Vishnu (or so it is believed),and also an interesting sculpture – with Lord Vishnu in the front and Lord Shiva behind. This time, when I visited, it was pouring, but the river was as dry as usual, and I wasn’t in the mood to cross a dry river, and didn’t visit the small shrine, so no photos this time either!
Here is a lingam on the river bank. Interesting, isn't it? The next two temples are those I have not yet been able to visit.
Kodanda Ramaswamy temple

The Kodanda Ramaswamy temple is just 1 km from the Tirupati railway station, and was built to commemorate the visit of Lord Rama to this holy city. I have passed by this temple, but never been inside. We planned to visit this time, but the rain put a stop to our plans, and this was the only temple left over on my list! As my mother says, we should leave something for another visit, for who knows, if we visit all the places, we may never come here again!

ISKCON temples need no introduction, and there are plenty of them all over India now. I have visited quite a few of them, and though I have passed by the one at Tirupati on every one of my visits, I have never felt like entering it. Tirupati to me is a city of ancient temples, and they are what attract me, no matter what their condition. I have never been enthusiastic about the newer ones, though I must admit that this one is beautiful! Maybe I should visit this temple next time just to take some photos! Meanwhile, if you want to know more about this temple, go to:
http://travelwithgs.blogspot.com/2010/09/iskcon-hare-krishna-lotus-temple.html

These are all the temples in the temple town of Tirupati – at least the major ones. All these lie within a 15 km radius of the Tirupati railway station, and can be visited in a day.


TTD runs buses to visit all these local temples, at the rate of Rs. 30 per head. There are plenty of such buses all through the day, at regular intervals. The buses start from the Srinivasam Pilgrims Amenities Complex, and details can be had at the reception. Just one thing – seating on these buses are on a first come first served basis, and you have to rush to get good seats. The conductor doubles up as a guide, though he knows only Telugu and some broken Hindi, so it is not easy to have a conversation with him regarding the temple details. However, Rs 30 per head is dirt cheap and this is certainly the best way to visit all these temples in just half a day!