Re-tracing the Silk Route on the Sands of Time

August 13, 2014
A caravan makes its way across the desert, the lead vehicle stopping often to check their route. They have a long way to go, and the desert terrain is rough, and easy to get lost in. It is monsoon, and they are relieved to be spared the scorching sun. The cloudy sky is such a blessing after the harsh summers they have experienced here. The landscape offers them a change too, with pools of rainwater breaking the monotony of the sand dunes.

At places, the rain has resurrected the seasonal streams, and a bunch of kids splashing in the water wave out excitedly as they pass. Travellers like these are rare, and the children’s excitement is palpable. Surely they have some interesting goods from the city for them!!

The travellers pass on, and soon arrive at their first stop – a small temple, albeit an ancient one. It is dedicated to Lord Shiva as Mahadev, and its sole inhabitant is an old priest, whose only companions are the shepherds who come to the temple for some shade and conversation. 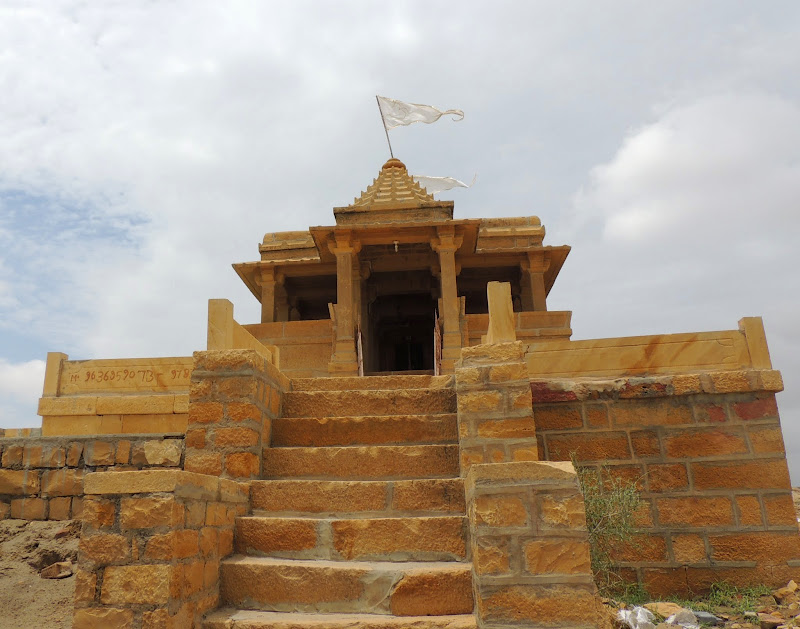 At one time, there was a small hamlet around this temple, but it has long been buried by the sands of time. Recently however, shards of pottery have been recovered from here, a reminder of the bustling village life it once hosted. More impressive are the wells which still stand, dug by the original inhabitants, deep into the rock. A pulley system allows water to be drawn from its cavernous depths, and let into the troughs which surround it. The hierarchy is clear. Irrigation is most important, and the water first goes to the fields. Next come the people, and water collected in the second trough is for them to drink. Finally come the animals, and the lowest level of water is for them, so that they can drink without any trouble. 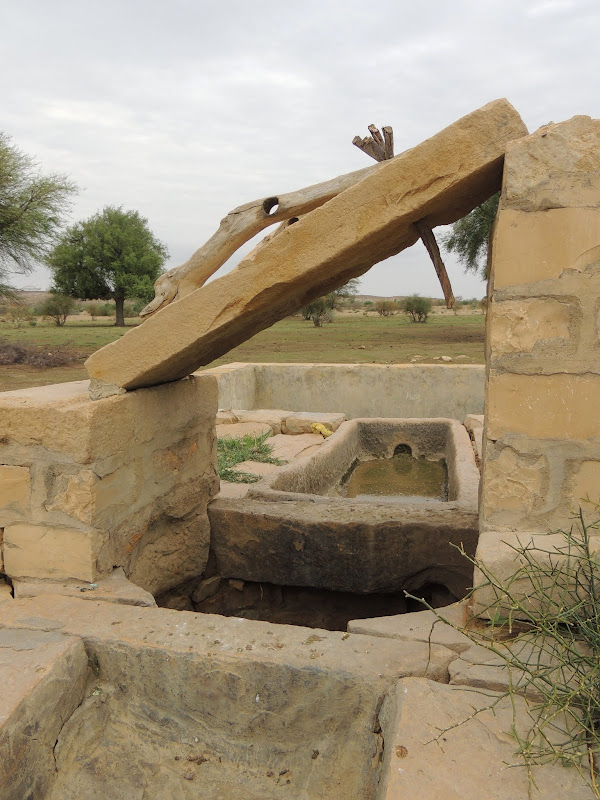 On the side is a mandap, or a pavilion, built so the travellers can rest. Recent visitors have left their own marks behind, in the form of their names, scribbled all over! 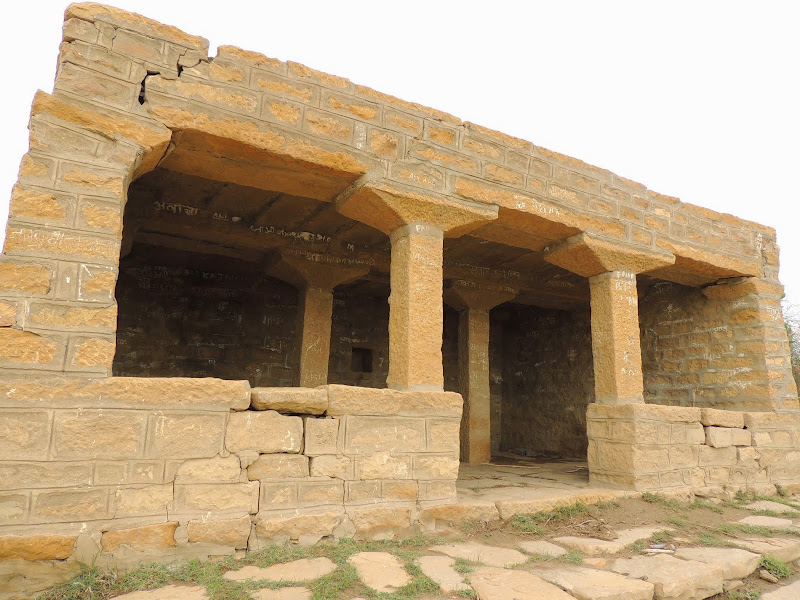 The caravan moves on, taking a detour to climb to the top of a hillock, so they can pay their respects to the goddess who resides here. She is adored by the locals, but has been installed by travellers like them, for the stone she is made of, is not to be found here. Where she came from, no one knows, but no one passes by, without asking for her blessings. 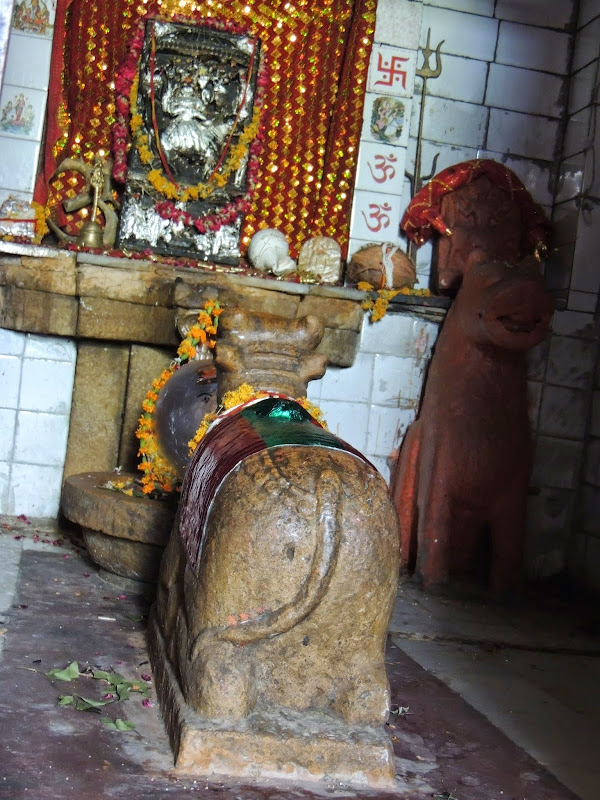 From the hillock, they can see far ahead, the path worn by their forbearers twisting and turning around the hillocks. It reminds them of the long journey ahead, and they move on… 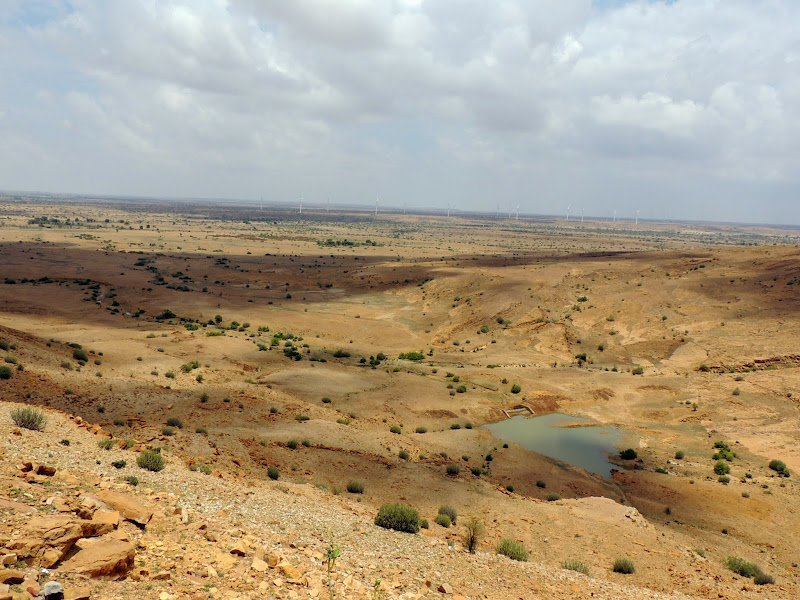 A little farther, is another hillock, atop which is a fort. This is their destination… for now. Here is where they stop, for a while, stretch their wearied limbs, and have a meal, surrounded by peacocks. 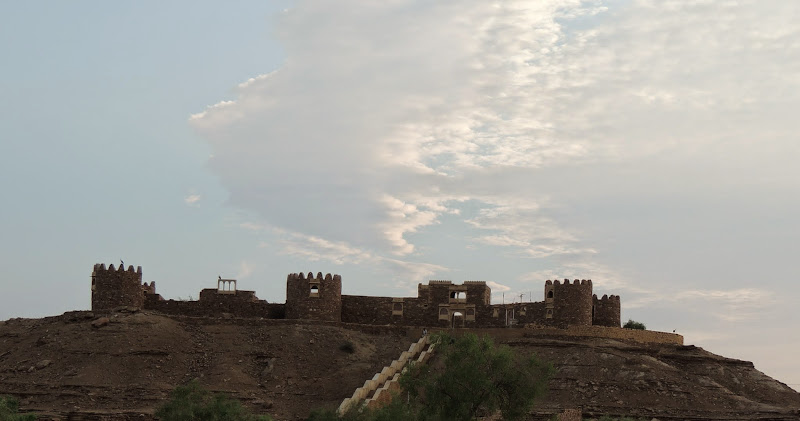 Centuries ago, this was a sort of check post. A watchtower, from where travellers could be seen from afar. The fort provided them sanctuary, a safe place to stay, as well as a place to trade. Here, the local traders and merchants came, to bargain with the visitors on the price of their goods. They bought and they sold precious items – jewels, pottery, spices and of course, silk! Now, the fort is deserted, save for the peacocks, and the children who come here to play. The village around lies abandoned – a sad relic of bygone days. The new village is a little farther away, and its residents avoid the old one, fearing it to be haunted.

Rested and rejuvenated, the travellers move on, and their caravan makes its way past more villages and hamlets. Some are abandoned, mere shadows of their erstwhile selves, but some are still inhabited. Here, the villagers come out to see the visitors, staring with open curiosity. It is the children who are the least shy, who come up and ask questions… 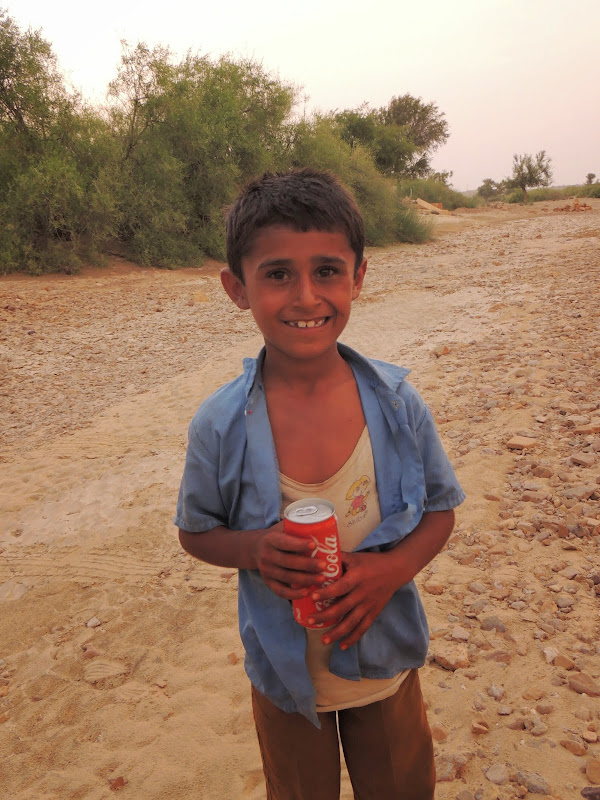 They pass by ancient temples, glorious in their detailing… 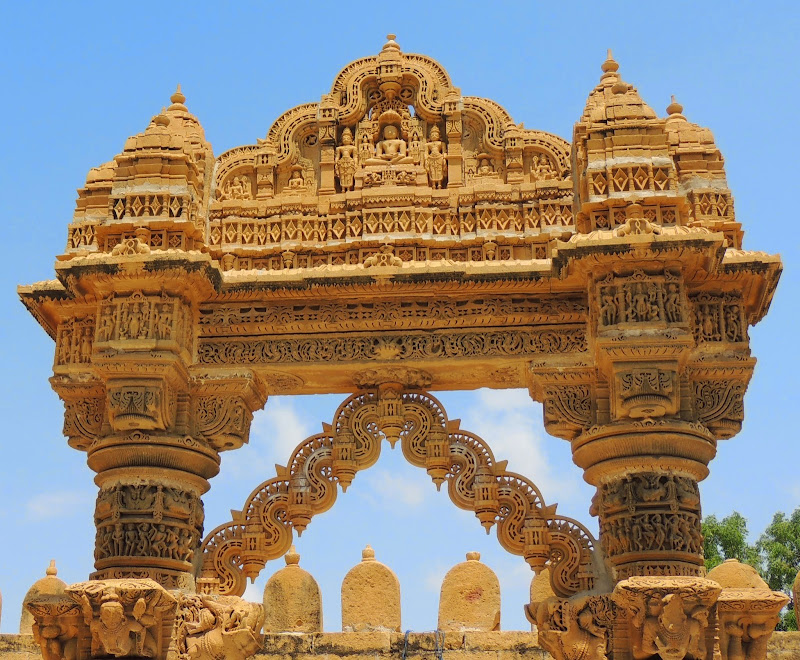 And hunting platforms constructed by kings around water bodies…. 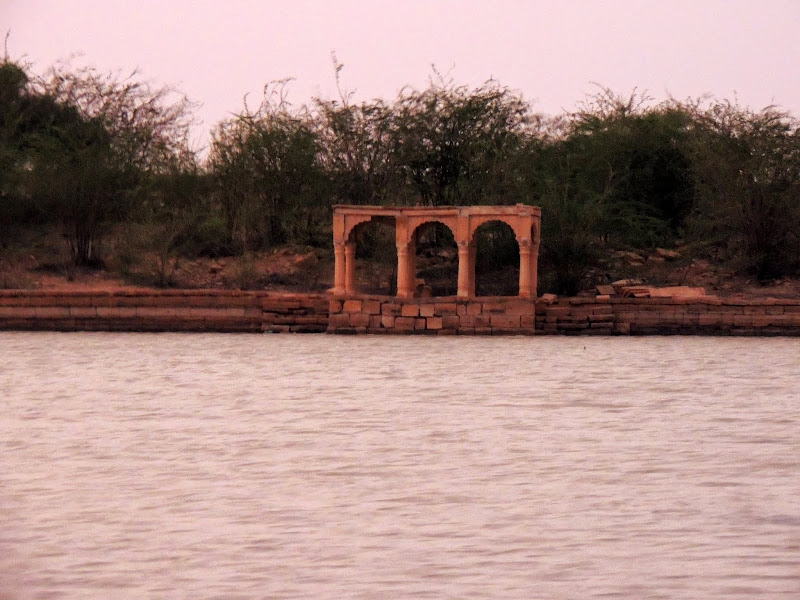 Eventually reaching their destination – the city.The Golden Fort rises over the town, a sight for sore eyes.

Within its narrow lanes are more temples, residences and shops… 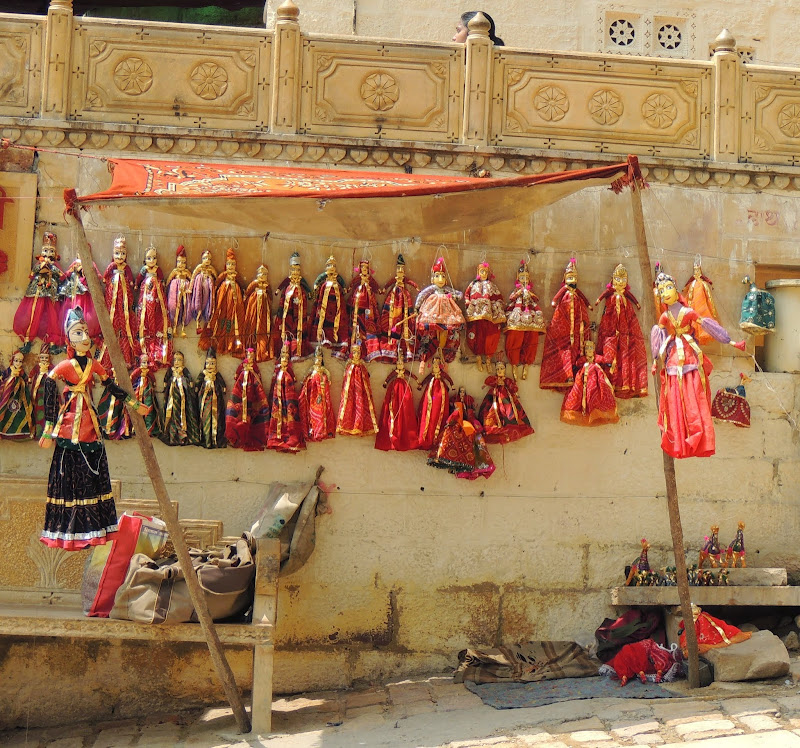 But the travellers are headed elsewhere… to the grand houses, or Havelis – the houses of the merchants, each one grander than the other, showing off their wealth, their prosperity. Once, these would have been bustling centers of trade, with visitors from far and wide, striking deals and driving hard bargains. The clinking of coins would have resonated within these walls. Today, these empty Havelis are but museums, showcasing a way of life no longer viable, even for those who own them! 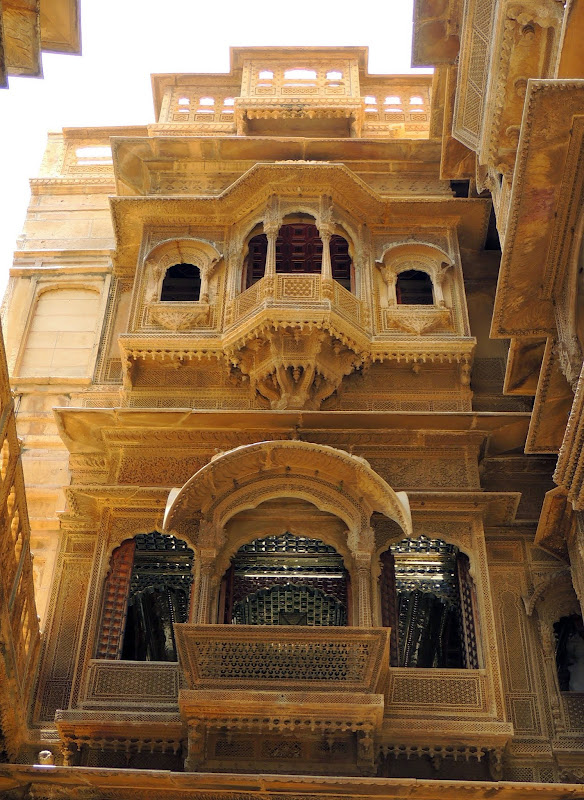 Heading out of the city, to wherever their path leads next, the travellers have one last stop to make… to remember those who came here before them. Spread over a mound are memorial stones and cenotaphs, of travellers and traders whose journeys brought them here, far from their homes, to rest for eternity. 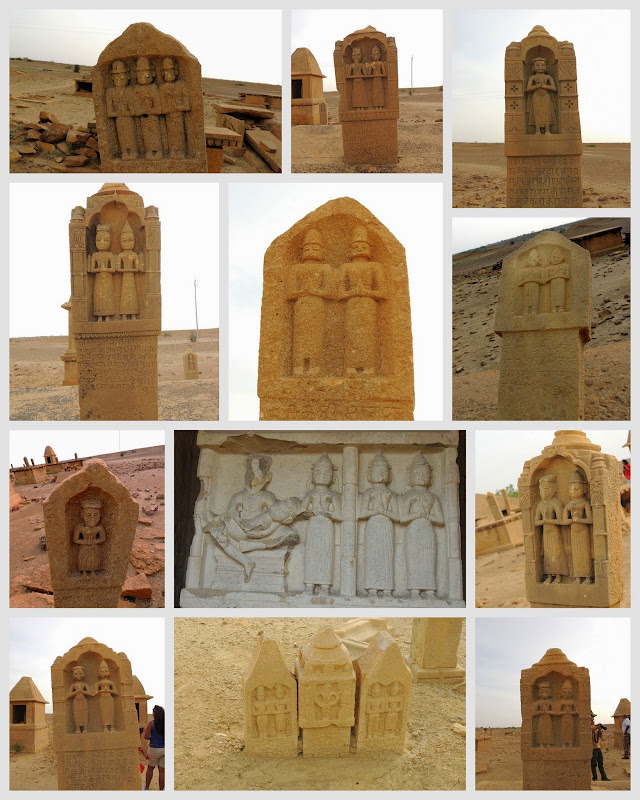 Over these memorial stones are carved names, dates and details, in a script which few can read any more. It is easier instead to look at the faces carved on the stones, their head dress and clothes speaking volumes more than the epitaphs. There are Phoenicians and Arabs, Orientals and Europeans, all with just one thing in common – that this was their final destination!

Sobered by such morbid thoughts, the travellers continue their journey, to other lands, conscious now of the spirits of ancient travellers, which have hovered somewhere over them, throughout their journey. It is their stories that the desert has told them, for, while men may go and men may forget, the Desert Remembers! 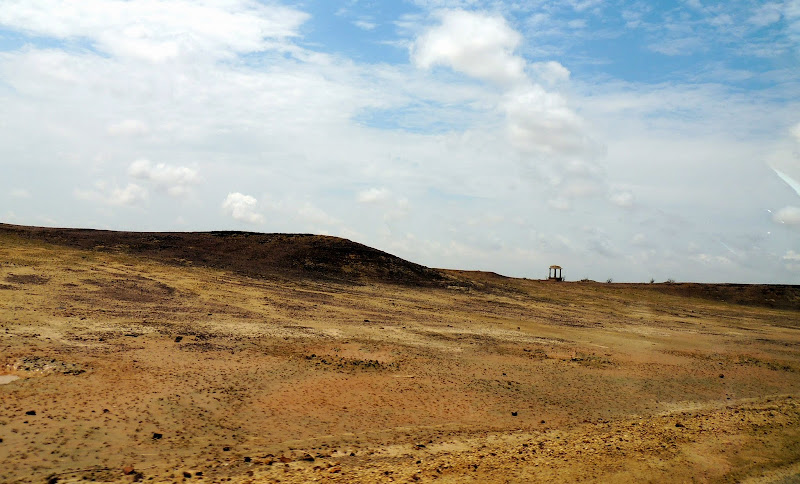 I was recently invited to Suryagarh, Jaisalmer, to experience the Magic of Monsoons in the desert, and our trip was planned around the erstwhile Silk Route which passed through Jaisalmer in the 16th and 17th centuries.

Caravans of traders passed this way, carrying precious cargo from the East and West. Jaisalmer then would have been a hub of trade, located as it was, midway between Europe and China. Recent archaeological excavations have revealed the presence of ancient towns under the sand, through pottery and ruined temples, and efforts are on to renovate them and bring them back to their former glory. Old structures like the Khaba Fort stand testament to the strong will of the locals, and their wells a testimony to living in harmony with nature, making the most of the situation. The ancient cenotaphs brought a lump to my throat, and I wondered about the life the traders led, not knowing if they would ever return home.

My post is dedicated to these people – the earliest of travellers, the ones we seek to emulate, and whose traces we sought, over our two day journey across the deserts of Jaisalmer. This post is my effort to tell you the story of these people, as I saw it, along that journey.

My special thanks to Suryagarh and its wonderful people, without whom, I may never have experienced this journey back through time.