March 12, 2015
Three stone structures stand at the edge of the mountain. Behind them is the valley, and beyond it, the mountains stretch as far as our eyes can see. It is an impressive sight, and I can finally understand why the erstwhile rulers of Sikkim chose this as the location of their palace. We are at Rabdentse, the second capital of the Sikkim kings, and the three structures are chortens, where the royal family offered prayers and incense to their deities. 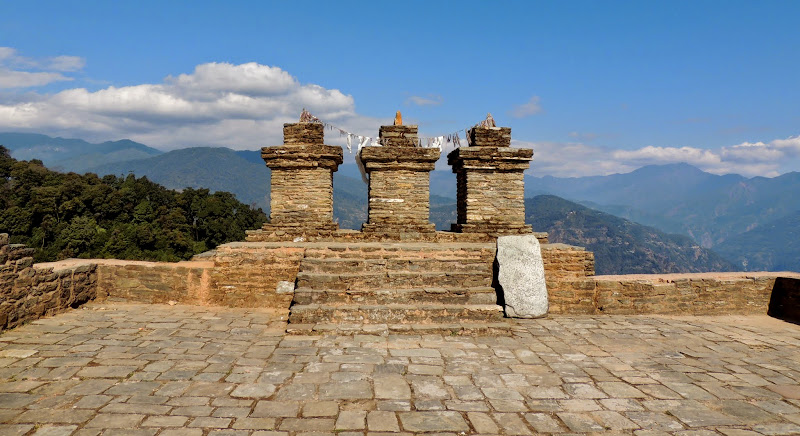 Earlier, our driver had stopped on the highway, and pointed to a simple entry arch. “Follow the path and you will reach the palace” he had said. And so, we had followed the path. There wasn’t a soul around, and the thick foliage was our only company. A few boards assured us that the path did indeed lead somewhere, and eventually, the forest made way for a clearing, where a few ruined structures were visible. We had wondered why this place, which would once been surrounded by a dense forest, had been chosen for the palace. Now, looking over the magnificent view, we knew. The terrain offered protection from the enemy, and the view inspired faith in the Lord who would look over, and bless them. It was, truly, the perfect location!


The first capital of Sikkim was at Yuksom, set up by Phunstok Namgyal, the first consecrated ruler, or Chogyal. His son, Tensung Namgyal was the one who shifted the capital to Rabdentse in 1680. The capital survived almost a century, in spite of palace intrigues, and attacks by Nepal and Bhutan. Eventually, its nearness to Nepal, and repeated attacks forced the capital to be shifted in 1793 to Tumlong, and Rabdentse was abandoned. 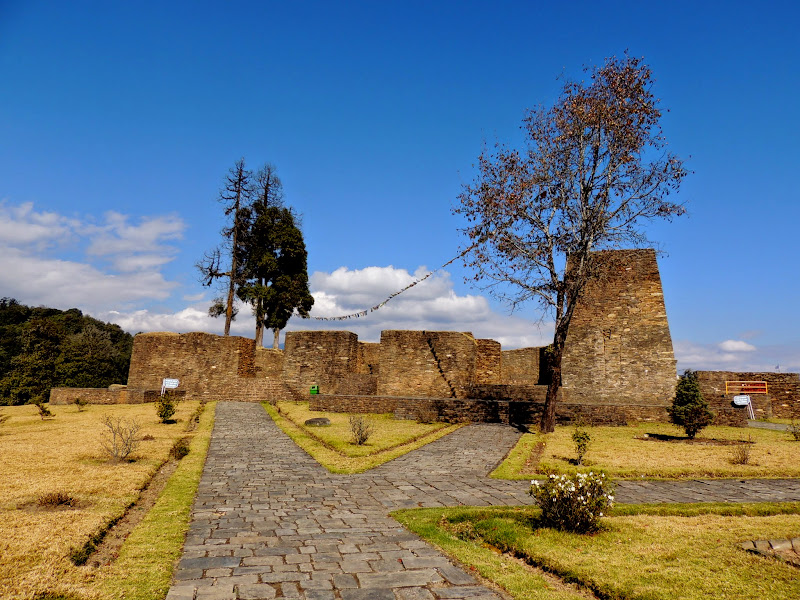 The structure which survives today is a small one by any standards. Only a part of the fortifications remain, suggesting a separate section for the commoners and the royals, though only a portion of the palace stands now. The main residential area of the palace is believed to have been a double storeyed structure, but only the base remains, with a few of the walls. On the southern side is what is believed to be the religious complex, with a superb view of the snow clad mountains. It is clearly evident that the Namgyals placed great emphasis on prayers, for the best sites are reserved for the chortens and stupas.

We spot a board announcing the presence of a museum, and head excitedly towards it, hoping for some more insight into the palace and its heritage. Unfortunately for us, the only staff member manning the site refuses to open it for us. Why? We have absolutely no idea, and neither does he, for he simply shakes his head as we talk, and finally walks off. I wonder if he doesn’t know Hindi/English, but sadly, I do not know any of the local languages either!

As we walk back to the car through the dense forest, I have many questions - about the discovery of these ruins, if they were actually abandoned completely, or if people had turned up to offer prayers long after the kings had gone. There is no one to answer me, and that is the saddest thought I have. That, though the forest has been preserved, and the ruins too, there is no one to preserve the memory of those who built these structures. The boards but tell us their history. There is no one to tell us their story.