December 21, 2015
Poring over Google maps to figure out the distance from Sankarankovil to Kovilpatti, the name ‘Kazhugumalai’ jumped out. The chance to visit this ancient site, on our way to the station was too good to pass. And that is how we found ourselves rushing over rickety roads, headed to Kazhugumalai, our luggage rocking in the back of our auto!


Kazhugumalai (also spelled as Kalugumalai) literally means, ‘mountain of the vultures’. The rocky outcrop does seem to be the kind of place vultures would be seen in, but we didn’t spot any. The stories of the place, however, relate to a vulture from our myths – Sampati, brother of the famed Jatayu, from the Ramayana. It is believed that after the Ramayana war, Sampati comes here to pray for his brother, on the advice of Rama. Time passes, and Muruga, or Subramanya arrives, on his way to slay the demon Surapadman and his brothers. The old story, it seems, is being repeated, and it is now Sampati’s turn to aid the gods. In return, Muruga blesses him, and gives him salvation. Since it was here that a vulture attained salvation, the hill is known as Kazhugumalai. At the foothills is a temple to Muruga, seen here with his peacock. The original shrine, or the garbagriha, is a rock cut cave dating back to the Pandya period. The structure however has been extended over the centuries, and the resulting temple is a beautiful one with many interesting sculptures and subsidiary shrines.

While the Kazhugumalai Murugan Temple is the most popular among pilgrims, it is not the most interesting structure here. The hill bears testimony to some amazing sculptural talent, dating back to the 8th and 9th centuries, that too belonging to both, Hindu as well as Jaina traditions! 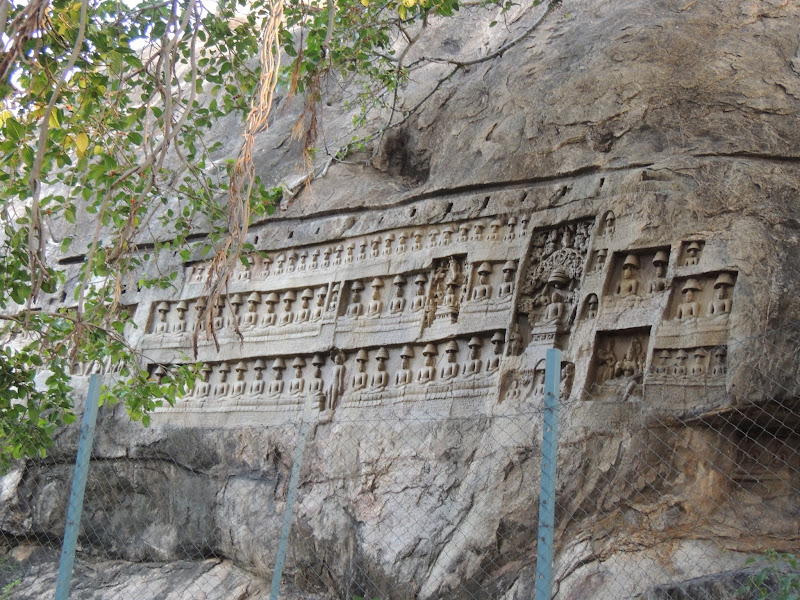 These rows and rows of Jaina figures are some of the most striking works of Kazhugumalai. I can only show you a small portion, since the ASI official in charge was closing up, and refused to allow me to proceed further. In any case, I might not have been able to manage the steep climb which leads to other, more impressive Jaina figures, located on the higher reaches of the hill. 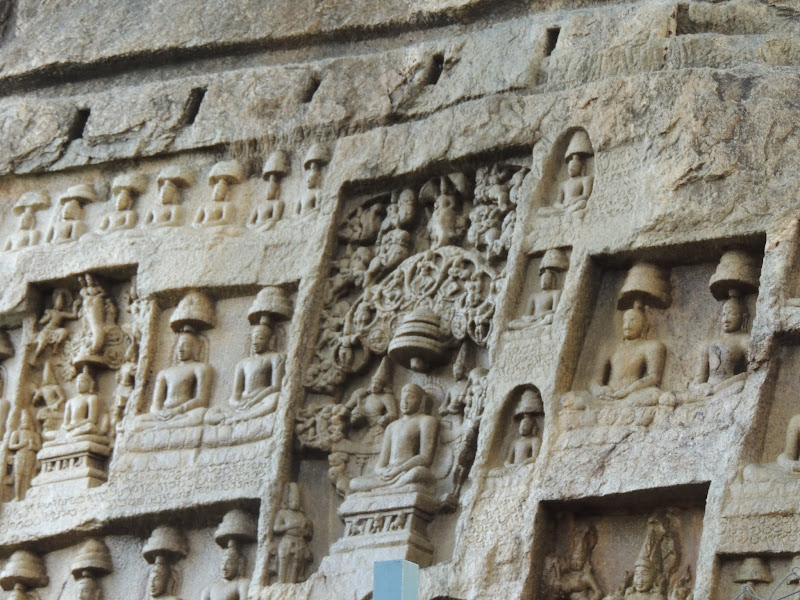 Jaina art seems to have flourished here during the reign of Parantaka Nedunjadaiya Pandiyan (AD 768-800), according to epigraphic evidence from the sculptures and inscriptions. The carvings have been made in the name of various donors, from carpenters and labourers, to merchants. The loss of Pandya patronage seems to have driven the Jaina Siddhas from the region, and thus put an end to the creation of this remarkable art work on the hill.

On the other hand, is Vettuvan Kovil, on the same hill. The name literally means “Sculptor’s temple”, and it is indeed a marvel of the sculptors’ art. Carved out of a single rock, the similarity to Ellora’s Kailasanatha Temple is unmistakable, and the temple is indeed called, the Ellora of the south. 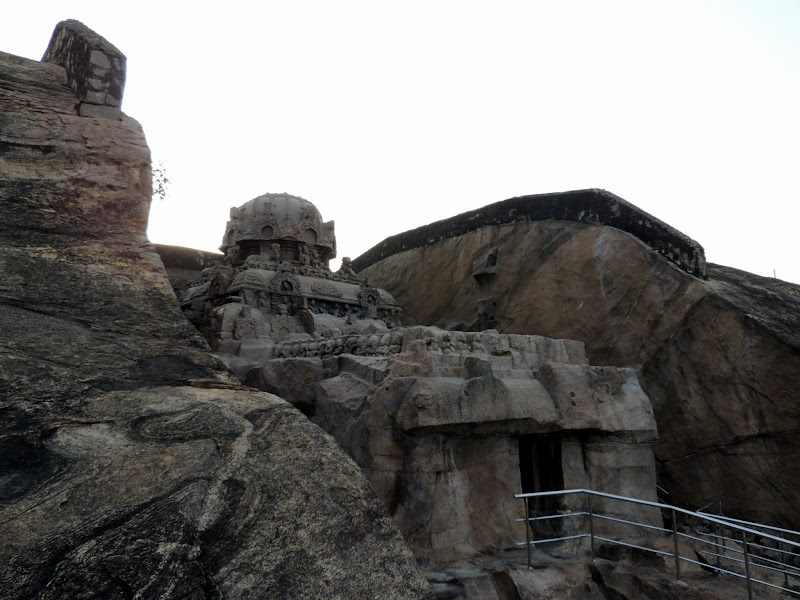 This beautiful temple is believed to have been built between the 8th and 9th centuries, during Pandya reign. It seems to point towards the transition of royal patronage, from Jaina beliefs to Shaiva beliefs. Sadly, the temple remained unfinished, for unknown reasons. 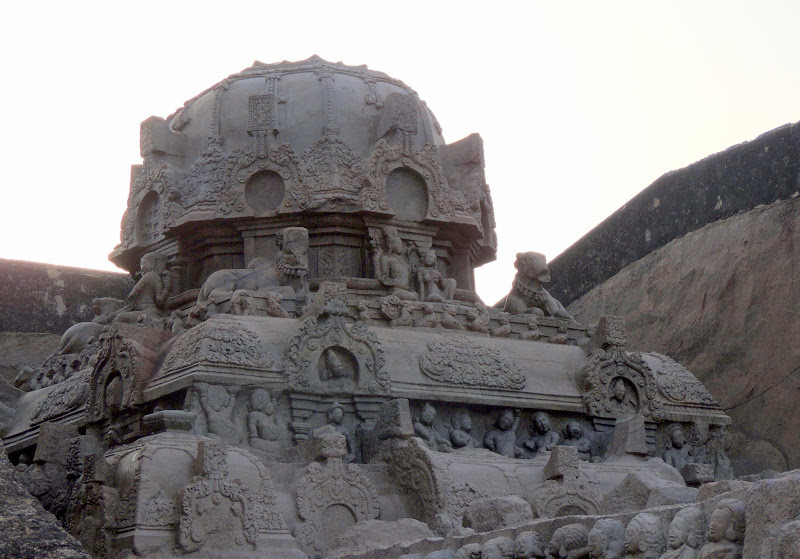 However, even the portion that was completed, and what remains of it, is impressive enough for us to spend hours simply gazing at the variety of sculptures – mostly of Shiva, but also of Vishnu and Brahma.

The sheer number of ganas depicted here, and the variety of their postures, is another interesting aspect of this temple. 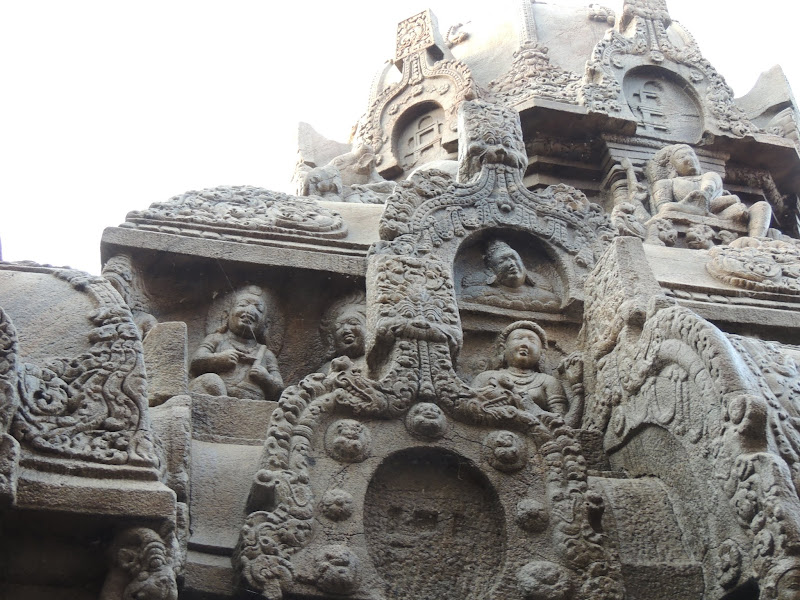 And the view from the top is truly impressive. It was amazing to see how beautifully sculptors had created this out of solid rock, centuries ago! 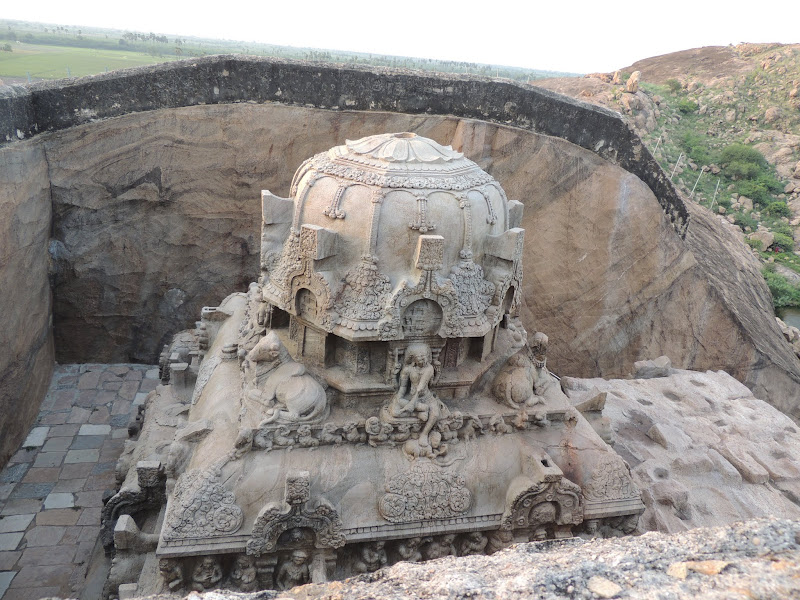 The sun was setting as we left, and I couldn’t help thinking what a wonderful ending this was, to our Tirunelveli Temple Run. We had visited so many ancient temples on our trip, yet nothing encapsulated the concept of changing times better than this hillock. It reminded us of the role patronage played in temple building, but above all, it highlighted the deep interconnection between religion and politics, something that is very apparent today. After all, as they say “The more things change, the more they remain the same!”

This brings me to the end of my Tirunelveli Temple Run, and also, my Summertrip 2015 series. The series has run longer than I had imagined, with 11 posts on the Temple Run, and around 45 posts in all. It has been a mammoth task, and I am actually glad it is over! Especially since I am soon headed on another trip… the last one of the year, my Winter Trip 2015!

Meanwhile, here are quick links to all my posts in the Summertrip series