Khajuraho - The Temple as Cosmos

October 24, 2016
The temples at Khajuraho are, at once, awe-inspiring by their size and architectural splendour; and overwhelming by the profusion and intricacy of the detailing. There is something to admire at every level – from the minutest details only seen up close, to the overall effect as seen from afar, or, in a modern parlance, from the micro the macro scale. 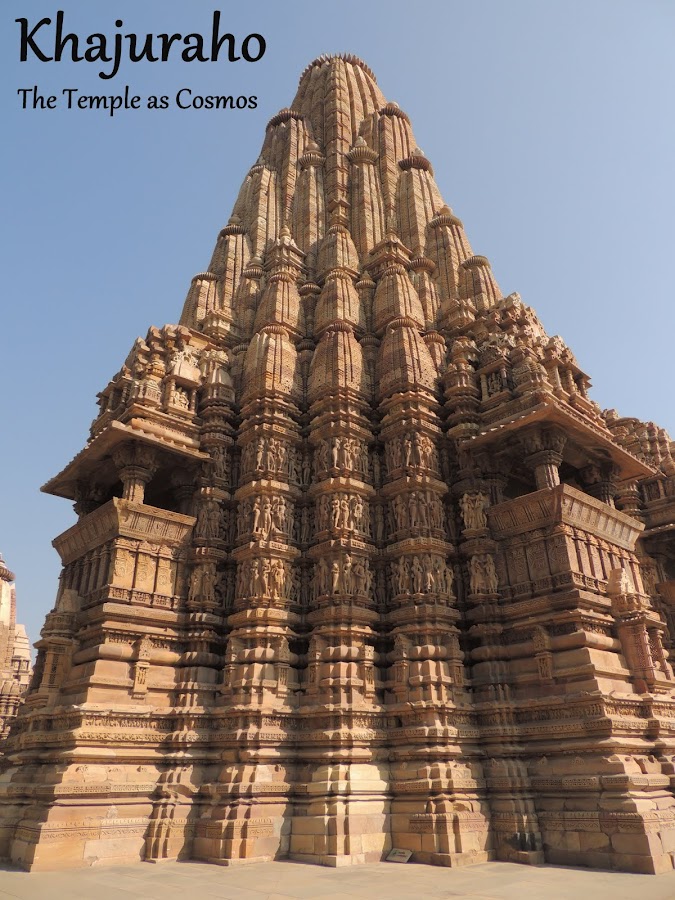 At first glance, all the temples at Khajuraho appear to be similar, despite the differences in religious affiliation. Thus, the Shaiva, Vaishnava, and even the Jain temples, seem to have the same kind of architecture, and similar kinds of sculptures. This is not surprising, since all the architects in Khajuraho followed the same tradition of architecture. Besides, the same group of people probably worked on multiple temples, irrespective of their religious beliefs. The differences however, lie in the details, and, for this, we need to look closer. It is only when we get down to the specifics of each temple, that we learn, that every figure, be it human, animal, mythical or divine, has been placed in a particular spot, for a very particular reason. In short, the sculptures are not for ornamentation, but they have their place in the larger scheme of things, in the very philosophy behind the building of the temple.

Among the various sects who built the temples at Khajuraho, the most prominent are the Vaishnavas, for, among the 25 temples still standing, 10 are dedicated to various forms of Vishnu , among them, Vaikuntha, Vamana, and Varaha. The Shaiva faith would have been just as equally important, for there are 8 temples to Shiva, most prominent among them being the Kandariya Mahadev, which is considered the pinnacle of art and architecture of that period. While there are also temples to Surya and the Chausath Yoginis, the five Jain temples in the Eastern group suggest the presence of a strong sect of Jains, most of whom were ministers and merchants during the reign of the Chandelas. While there is no Buddhist temple standing here now, the discovery of a Buddha sculpture hints at the presence of Buddhist monks in the region at some period of time.

With so many sects, each with their own philosophy and beliefs, living in close proximity to each other, Khajuraho must have been an epicentre of philosophical ideas and conversations, something which is reflected in the temples as well.

Take the Lakshmana temple, which is based on the Pancharatra system of Vaishnavism, which came from Kashmir. The original idol of Vaikuntha Vishnu, which graced the sanctum came from the Chamba region, brought to Khajuraho as a war trophy by the Chandela king Yashovarman in AD 954. The idol which stands in the sanctum today is not the same, but one placed here at a later date. The temple is built in the Panchayatan style, with four subsidiary shrines at the corners. 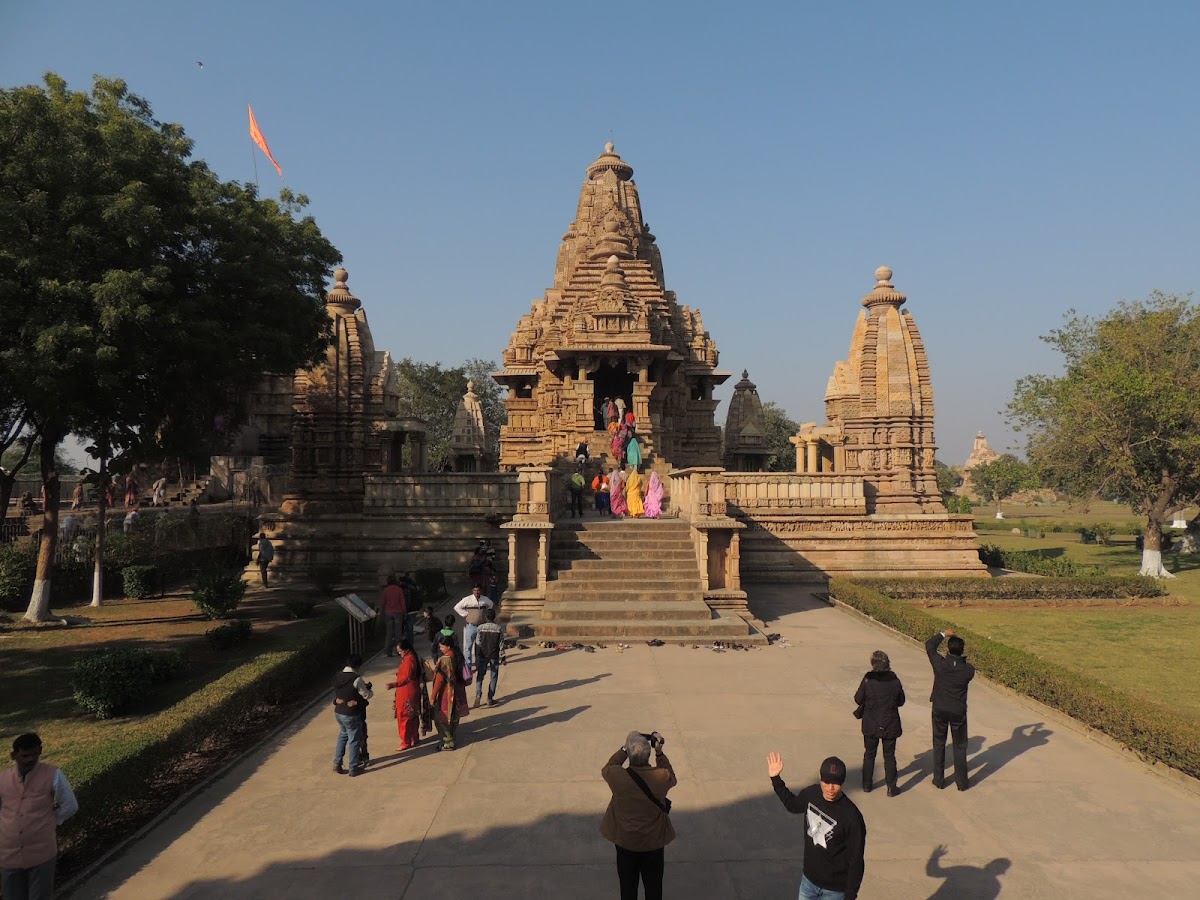 Vaikuntha is a composite form of Vishnu. He has four heads, of which three are visible here. Among the three visible heads, the front one is human, on his left, a boar, and on his right, a lion, representing the Varaha and Narasimha avatars. The idol does not stand alone, but is surrounded by icons, among which are the avatars of Vishnu, as well as other forms according to the Pancharatra tradition. If you stand in the centre of the pillared hall just outside the sanctum, you will notice that the main idol in the sanctum, the panels around it, and the doorway, appear to be a single entity. The doorway too is intricately carved with the various forms of Vishnu, and the other divinities, including Brahma, Shiva, Lakshmi, the Nine Planets or Navagrahas and Kubera. Together, this represents the idea of the Viswaroopa of Vishnu, his cosmic form, encompassing all the divinities. This is in conjunction with the Pancharatra system, where the Supreme Being is Para-Vasudeva, who manifests in his various forms.

This symbolism continues outside the sanctum, as well, as if the deity emerges from the shrine taking on different forms, at different levels. Thus, the niches on the outer walls of the sanctum contain images of Varaha, Narasimha, and Hayagriva, along with Vishnu as Narayana, seen with his devotees. On the outer walls of the circumambulatory path inside the temple, we have other deities, among them Parvati, Shiva, Brahma, Kartikeya, Sankarshana or Balarama, Krishna, the Ashta Dikpalas, the guardians of the eight directions, and the Bull headed Vasus who represent the different aspects of nature.

All these deities appear once again on the outer walls of the temple. Very interestingly, in the main niches of the outer walls are seven planets, along with Ganesha and Ambika or Yogeeshwari. The Ashta Dikpalas, or guardians of the eight directions stand guard on projections of the walls, while the Vyalas and Surasundaris stand in the recesses.

Thus, as Dr. Devangana Desai says, the architect has conceptualized the temple as Mount Meru, the centre of the universe.

If the Vaikunta Vishnu is a study in iconographic detail, the lingam in the sanctum of the Kandariya Mahadev temple is the exact opposite, representing the unmanifest, or formless, or aniconic form of the Lord, according to Shaiva Siddhanta.  The lingam stands right at the centre of the sanctum, directly under the finial, as if connecting the two levels of earth and heaven, or humanity and divinity. However, the idea remains the same, since once again, the unmanifest and transcendental Lord manifests himself in various forms, on the walls, as if emerging from the shrine. Here, on the niches outside the sanctum, we can see Tripurasura-samhara-murti, Andhakasura-samhara-murti, and Kalyana-sundara-murti, along with some beautiful images of Sadashiva, the multi-headed and multi-limbed, cosmic form of Shiva. To see this image, head over to the AIIS Database...

Once again, while we have forms of Shiva, as well as Vishnu, Brahma, and the other deities on the inner and outer walls, we also have the Saptamatrikas in the outer niches of the temple, as if circumambulating the shrine, along with the Ashta Dikpalas.

The name of the temple - Kandariya Mahadev comes from the local word for cave, and the temple itself resembles a mountain, thus drawing parallels to Mount Kailash, the abode of Shiva.

The Jain temples follow a similar system, with various divinities, both Yakshas, and Tirthankars, along with the Dikpalas, shown on the outer walls.

At the Varaha Temple, where the temple itself is rather simple, the massive idol of Varaha has over 625 deities carved on it, thus symbolising the entire cosmic system.

Thus, it is interesting to see, that the temples here are depicted as the centre of the universe, or the focal point of the entire cosmos, with every icon in place according to the respective philosophical systems. Thus, when we circumambulate the temple, we become a part of this cosmic system as well, through the divinity which rests within us.

The temples, therefore, are so much more than just the idols and sculptures. Seen as they are meant to be, they represent the cosmos itself!

It is fascinating to think, that well over a thousand years ago, sculptors, artisans, builders and masons came together to work under master architects and Acharyas of various orders, to create these monuments to the gods, which stand tall even today, despite the vagaries of time. The patrons, the planners, and the creators of these magnificent works of art are no more, but their work lives on. Isn’t it time we give them their due, appreciating them, for the amazing conception of the temples, in the context in which they were built?