Khajuraho - More Sculptures, and some thoughts as well!

November 08, 2016
Writing about Khajuraho was not easy, with so much already written on the temples, by those who have studied them in far more detail than I have. The form my posts eventually took was because of my attempt to classify the sculptures I had seen, to understand them in the wider context of the temples themselves. Now that I have shown you the Forms of Vishnu, Shiva, the Devi, the Ashta Dikpalas and the Ashta Vasus, let me show you a few sculptures which fit into none of these categories, but fascinated me all the same, for many reasons, and brought up a lot more thoughts as well, starting with this image of Kartikeya.


Kartikeya is usually seen with a spear, a rooster, and his mount, the peacock. At Khajuraho, however, he is also shown with a manuscript. Though the spear seems to be broken, the peacock can be seen standing beside him, and three of his six heads are visible. There is a woman standing by his side, apart from two attendants, and in the panel below him are a group of Ganas, with musical instruments. He stands in the main hall of the Lakshmana temple, facing the shrine.

I first read of this image of Kartikeya in Dr. Devangana Desai’s book on Khajuraho, and was eager to see him in person. What a disappointment it was, therefore, to miss him on our first round of the temples. However, I was so insistent on seeing him, that we went looking for him again! And this time, we managed to spot him! Besides, once I started looking around, I saw lots more similar images with manuscript in hand, which made me wonder if they could be Karthikeya too!!! However, here is a different image of the same god….

This is from a niche on the Kandariya Mahadev Temple, and here Karthikeya is more recognizable. Three of his heads are visible once again, though he is now seated on his peacock, and he holds, apart from the manuscript, a spear, a fruit, as well as two lotus stalks.

Dr. Desai, in her book, mentions that Karthikeya is considered a teacher of grammar, at Khajuraho. This is very interesting, because, in the north, Karthikeya is seen most often as a warrior. It is in the south, that he is also a teacher, that too, one who taught his own father, Shiva himself! I find this connection intriguing, and think that this idea of Kartikeya as a teacher must be a part of the change in perception of him as a deity, both in the North as well as in the South.

The other intriguing sculpture is that of Agni. He is seen all over the temples, mostly as one of the Dikpalas, though he is also shown independently, still facing South-East, but depicted in far greater detail, thus as a more important figure. Here, on the outer wall of the Lakshmana Temple, he is seen flanked by two attendants near his feet, and four ascetics.

Dr. Devangana Desai says that Agni is the priest of the Gods, and also the God of priests. She calls the four ascetics flanking him as ‘Tridandi ascetics’, holding three sticks or dandas tied together in one hand. One holds a sacrificial ladle in the other hand, while another holds a rosary. The two others are shown in a preaching posture. Dr. Desai adds that these ascetics are supposed to have control over mind, spirit and body. Agni himself is shown without his mount, the ram, and holds a rosary, manuscript, sacrificial ladle, and kamandalu or water pot in his hands. She suggests, that on one level, this Agni could stand for the Vedic order which the temple upholds. She also suggests that these sculptures could have a higher, or more complex meaning, linked to their placement, as well as the sculptures placed around them. That, however, needs an entirely different level of understanding, of the philosophy behind the temple, which I lack at the moment. There is a long way to go before I can write more about this aspect! Meanwhile, I enjoy the imagery, and sharing them with you!

Moving on, another sculpture which fascinated me is this one, from the Vishwanatha Temple. 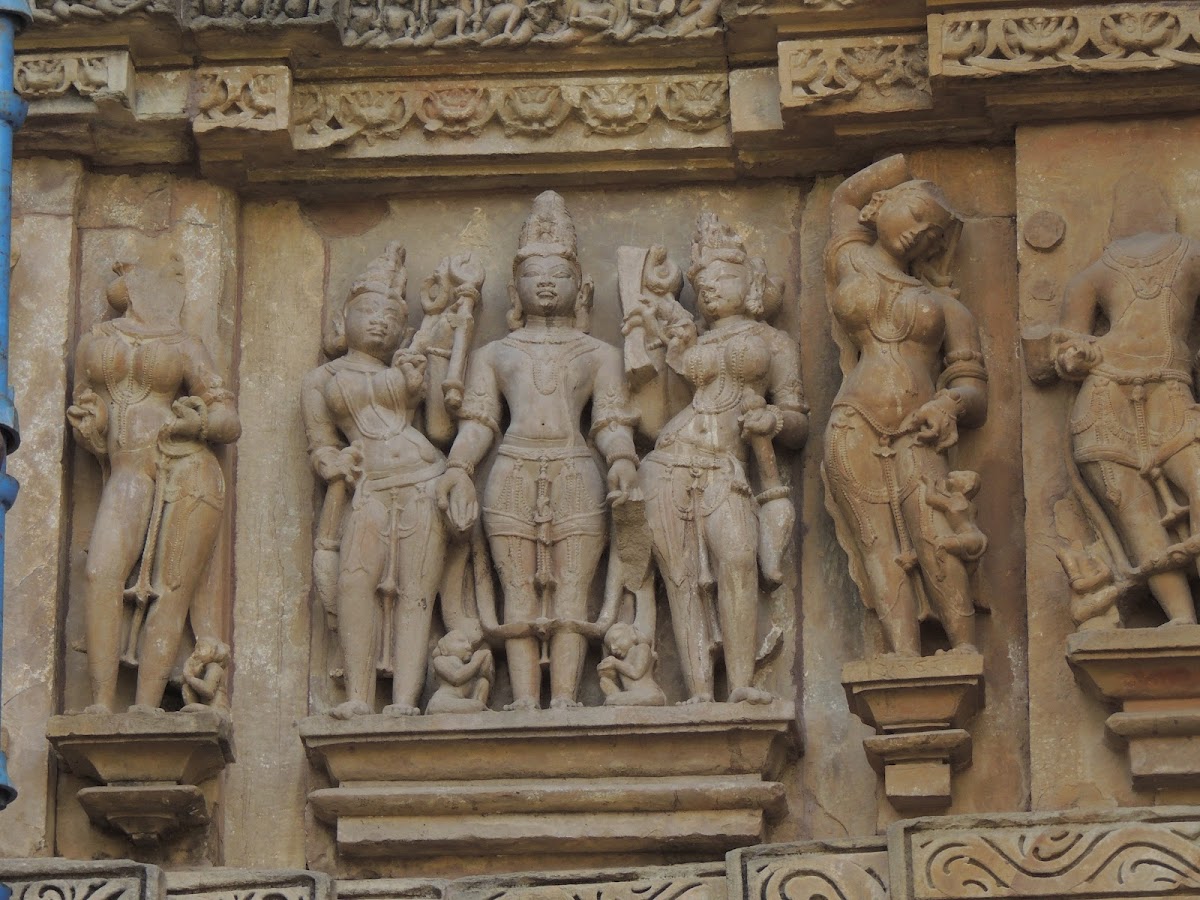 Dr. Desai identifies him as a composite of Shiva and Agni….a fascinating concept, since it makes me wonder why they are combined. Interestingly, Kartikeya is considered to be a son of both, Shiva as well as Agni. And the youthful, handsome figure standing with two female attendants flanking him does remind me of the handsome Muruga seen in the south with his two consorts Valli and Devasena. Interesting isn’t it, how we only notice patterns that we are already familiar with, everywhere?

There are two more composite images on the outer walls of the Vishwanatha Temple. 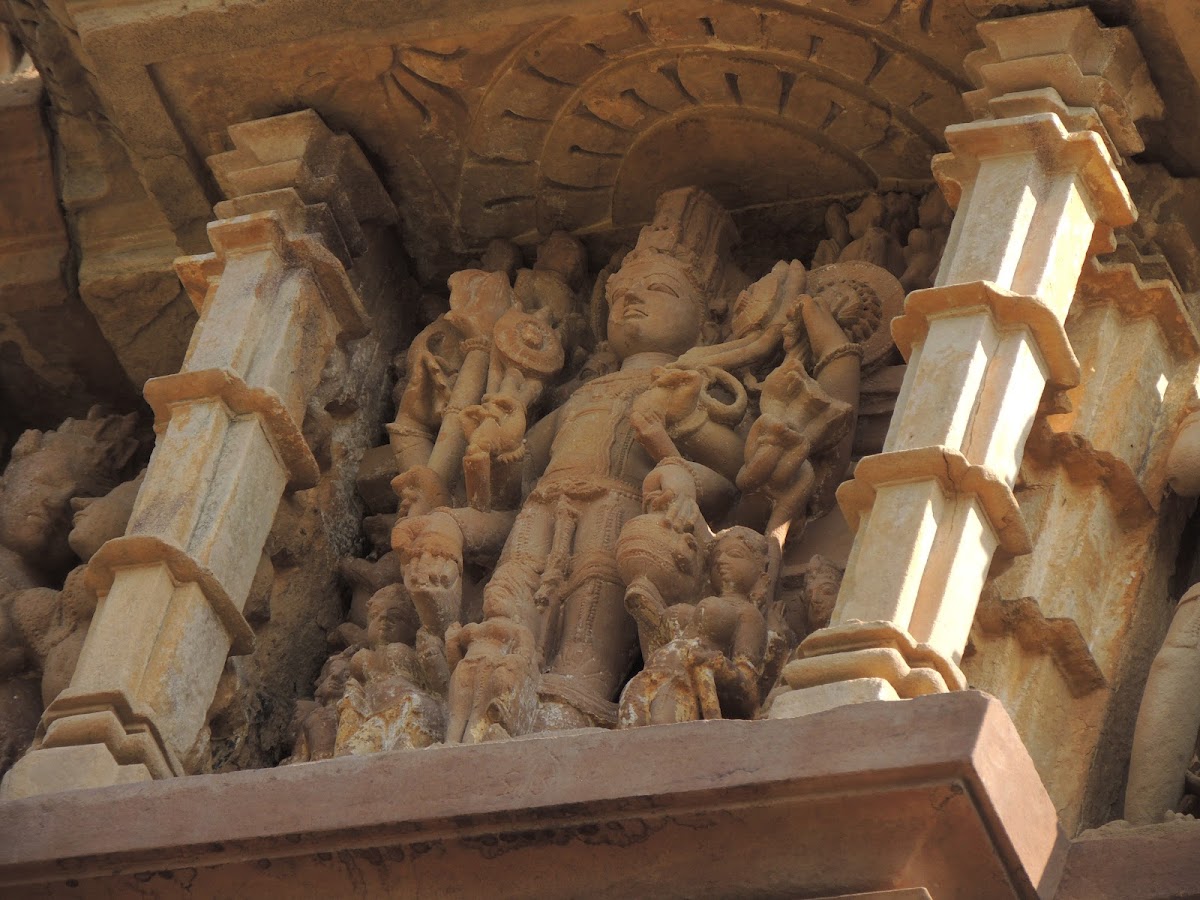 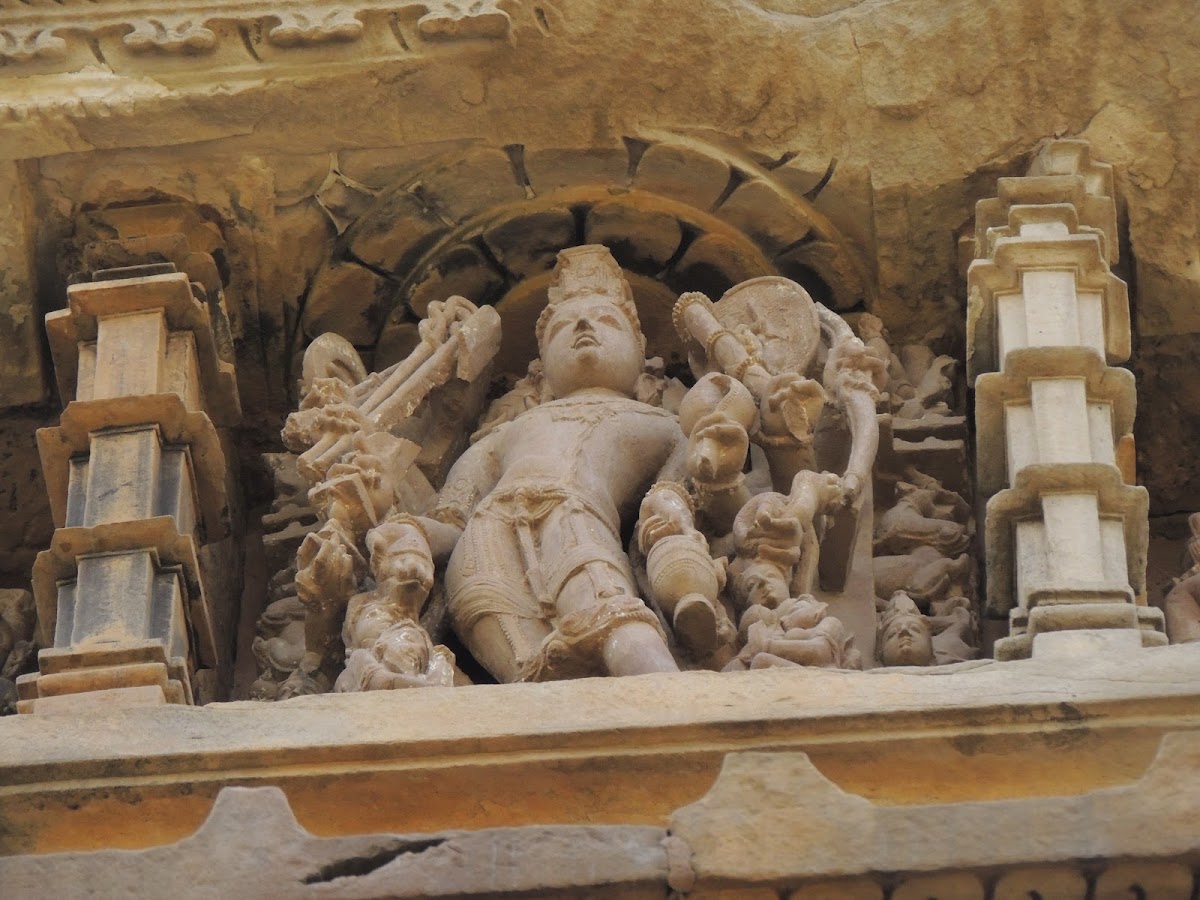 At first glance, it is only the central head which is visible, so he appears to just be a deity with multiple arms holding a variety of weapons. However, look closer, and you can see two more heads, on the sides. Take an even closer look, and then you notice that the  heads aren’t human. They are clearly a boar and a lion, which means these images, are of Vaikunta Vishnu. This is emphasized by the female figure standing between his feet in the first pic, who could be Bhudevi.

I haven’t included them in my post on Forms of Vishnu, because, at the time of posting, I wasn’t sure of their identity. Having said that, I must mention that I am still not sure of their identity, which is why they are here, among other such interesting figures. What makes them so interesting is the variety of things they hold in their hands. Between the two images, you can see attributes of multiple deities – from the lotus flower, the trishul, the noose, water pot (kamandalu), rosary (aksamala), bow and arrow, sword and shield, conch, discus (chakra), mace, and manuscript. This medley of attributes in these two images makes me wonder if these are composite deities, combining the aspects of Vaikunta Vishnu with Brahma, Shiva and Surya. Unfortunately, the images are rather high up, and my photos aren’t good enough to verify my thoughts. It would be good to hear your thoughts on them as well!

A similar interesting composite image is from the Duladeo Temple. Here, the deity is in a seated position, and, at first glance, he appears to be  Surya, because of the two lotus flowers he holds prominently in his main hands. However, looking closer, we can see the Trishul and snake, suggestive of Shiva, and a rosary and kamandalu suggestive of Brahma. Looking even closer, there is a trace of two heads on the side, which once again appear to be non-human! Could this also be a composite of Vaikunta Vishnu, Shiva, Brahma and Surya? 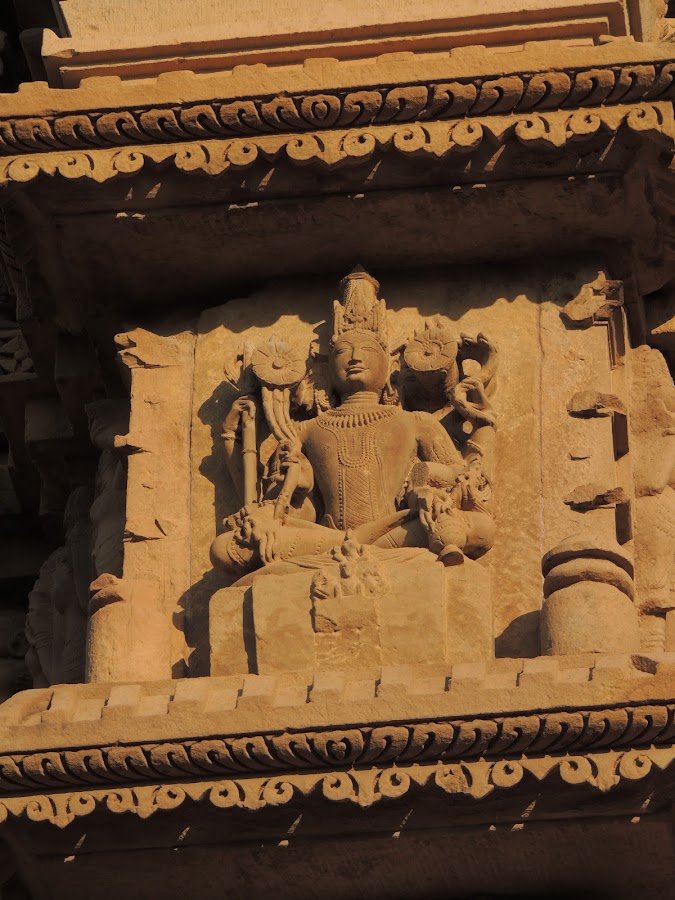 These composite images are among the most interesting sculptures that I saw at Khajuraho. While these aren’t the only composite images, I am especially interested in them, because the most important temples in Khajuraho are to Vaikunta Vishnu, Shiva, and Surya. While there is no Brahma Temple (the so-called Brahma Temple has a chaturmukha lingam in it now, and seems to have originally been dedicated to Vishnu!), Brahma himself is present in every single temple, in quite prominent positions on the walls.

Are these composite images a method of religious integration, bringing together all the separate sects at Khajuraho? Could these symbolise, and emphasize to the visitors, that though the names may be different, all the gods eventually are one, and that all sects revere different aspects of the same Supreme Being?

Another fact that struck me, was the number and variety of figures holding a manuscript. From Brahma, Vishnu and Shiva, to Kartikeya, the Dikpalas, Vasus, Navagrahas, and even the goddesses seem to hold scrolls or manuscripts in their hands. Does this emphasis on manuscripts indicate the importance of knowledge and learning in Khajuraho at the time these temples were built?

These two observations changed the way I looked at Khajuraho… no longer just as a temple town, with some of the most beautiful temples I have ever seen, but as a centre for learning, for discussions, where many sects came together. What a wonderful place it must have been!

P.S. Special Thanks to Dr.Kirit Mankodi who very patiently cleared a lot of doubts and answered all my queries about some of these sculptures. And Sudha needs a special mention as well, for all the animated discussions and exchange of ideas which led to this post.