Miles and miles of scrub land loomed ahead, interspersed with glimpses of sand dunes. A narrow path led us deeper into this expanse, and not a soul was to be seen anywhere. We had been driving for what seemed like hours, and I began to wonder just how much farther we were, from our destination. Soon, a tower made its appearance on the horizon, and we were able to see the barbed wire fences, which we had expected to see. It fitted perfectly with our idea of what a border should be like. What we hadn’t expected, was the young woman who waited for us at the fence.

Our papers and authorization checked, we stepped out of the vehicle. Another young woman was visible in the tower – doing her duty, keeping watch. The young girl who was talking to us was doing her duty too, ensuring we didn’t stray far!

It is only recently that women soldiers have been allowed to patrol our borders. We had seen the news in the papers, but that is all it was, to us – a news item. It was seeing the girls here that brought the news to life, its possibilities, its implications, and of course, the immense change it signifies.

The girls themselves were proud and enthusiastic, eager to prove that they were just as efficient as their male counterparts.

I shall always wonder if it was the sight of the border itself, or the women that made more of an impression on us that day. Having visited two other borders of our country – at Wagah, and Nathu-La – the differences stood out clearly.

Visitors to this part of our border are few. For one thing, the drive is too long. For another, it lacks the drama our more famous border check posts provide. Yet, this one provoked more thoughts.

Brightly whitewashed conical posts mark the International Border. Barbed wire fences on both sides mark the lines of control. Check posts and towers help keep watch, for any sign of motion, of the slightest threat to our security. It does happen, but rarely, but watch has to be kept, constantly. All this for a line, drawn by us, on a land we believe is ours to portion out. A line which we are so possessive about, guarded by men and women, far from their families, standing here, for hours on end, staying alert for every second, for you never know when a moment’s distraction will prove too expensive.

We lingered a while longer, knowing our time was up, but somehow reluctant to leave. A flock of birds flew over the fence, chirping loudly, and headed straight for a water trough, evidently maintained by our soldiers. “These are the only welcome visitors from the other side” laughed the young soldier, lightening the moment.

Getting into the car, we were all quiet, overwhelmed by our thoughts. We assumed we were headed back, till Chandra ji, our guide for the day, said, that we weren’t done… yet.

Our next destination marked an event which took place almost 45 years ago – the battle of Longewala. On the night of the 4th of December, 1971, as the board at the site informed us, the Alpha Company of 23 Punjab Regiment, of the Indian Army, stood fast against an incursion by the Pakistani Infantry and Tanks. Despite being heavily outnumbered, the soldiers stood their ground, holding out till the dawn of 5th December, when the Indian Air Force could arrive to help. While the Indian Army did suffer losses, it was the other side which suffered heavy casualties and eventually retreated, leaving behind some of their tanks and heavy artillery. Read a complete account of the battle and all the sections of the army who fought here. 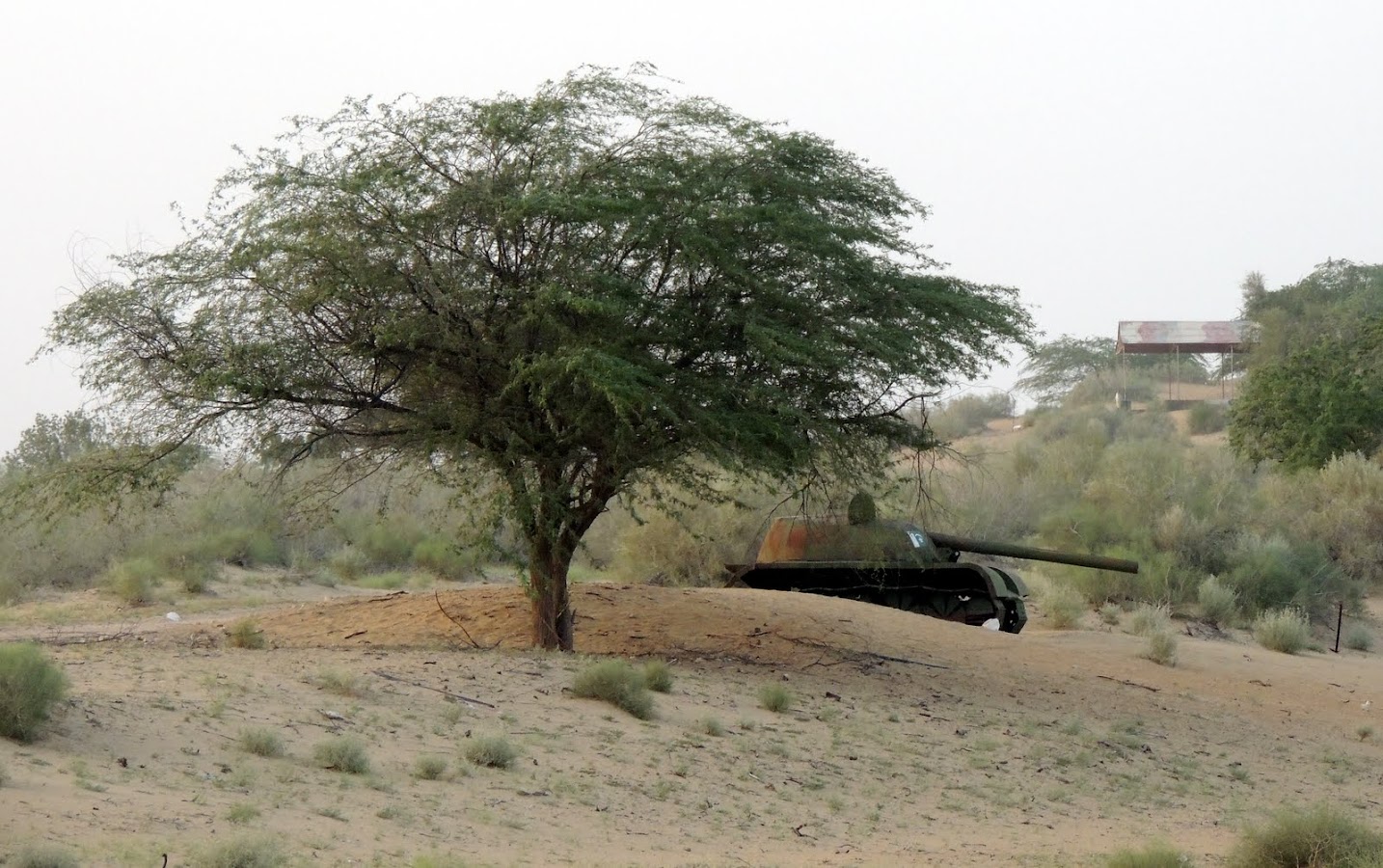 The site of the War Memorial at Longewala is about 15 Km inland from the actual border, and a couple of tanks of the Pakistani Army still stand here, mute witnesses to the battle. 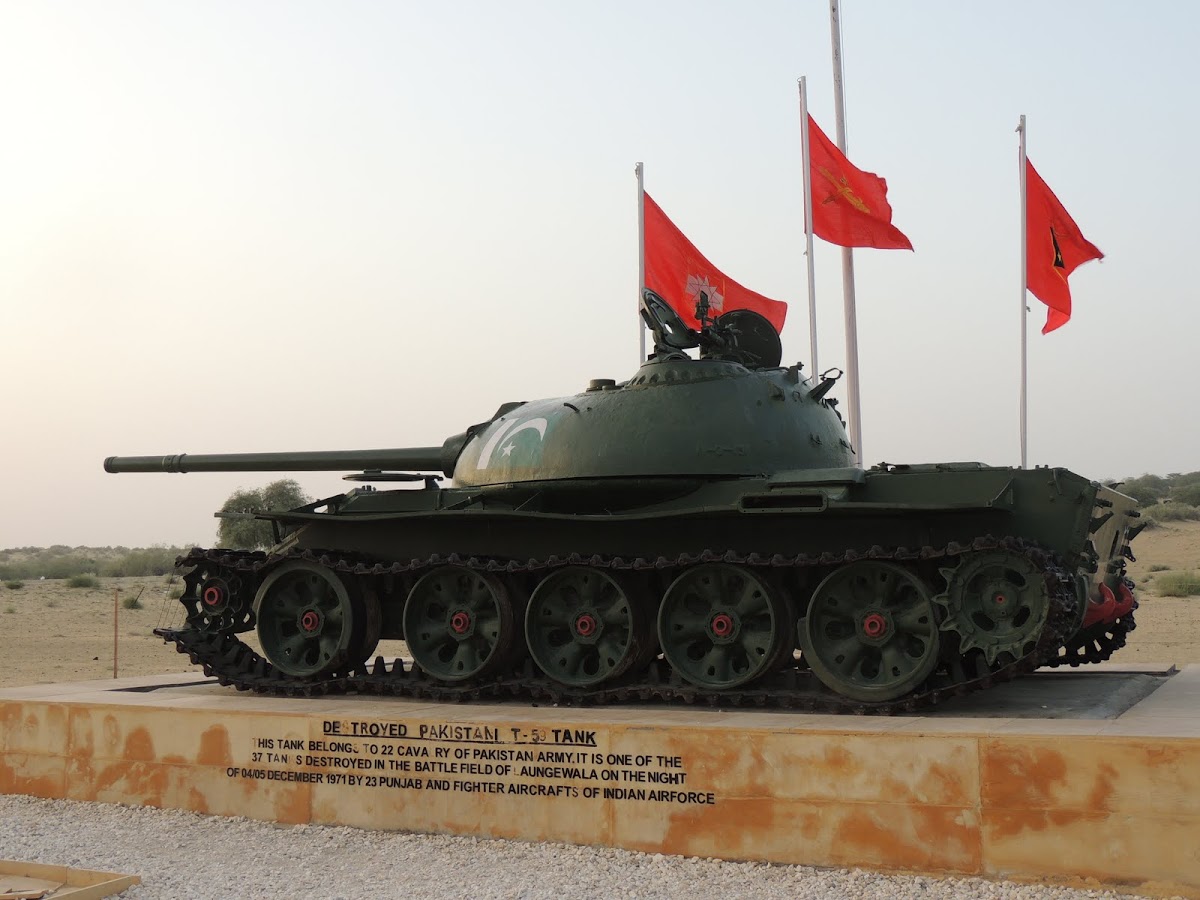 As I listened to the story, I wondered why it sounded so familiar, especially since I am usually not too enthusiastic about war stories. It was only as I wandered around, looking at the tanks, and reading the slogans and quotes painted on rocks around, that I realized why….

It wasn’t the battle I was familiar with, but its story as immortalized in the movie ‘Border’. Once I realised the association, I also realized that most people visiting the site, just like me, related more to the movie, than to the actual event. 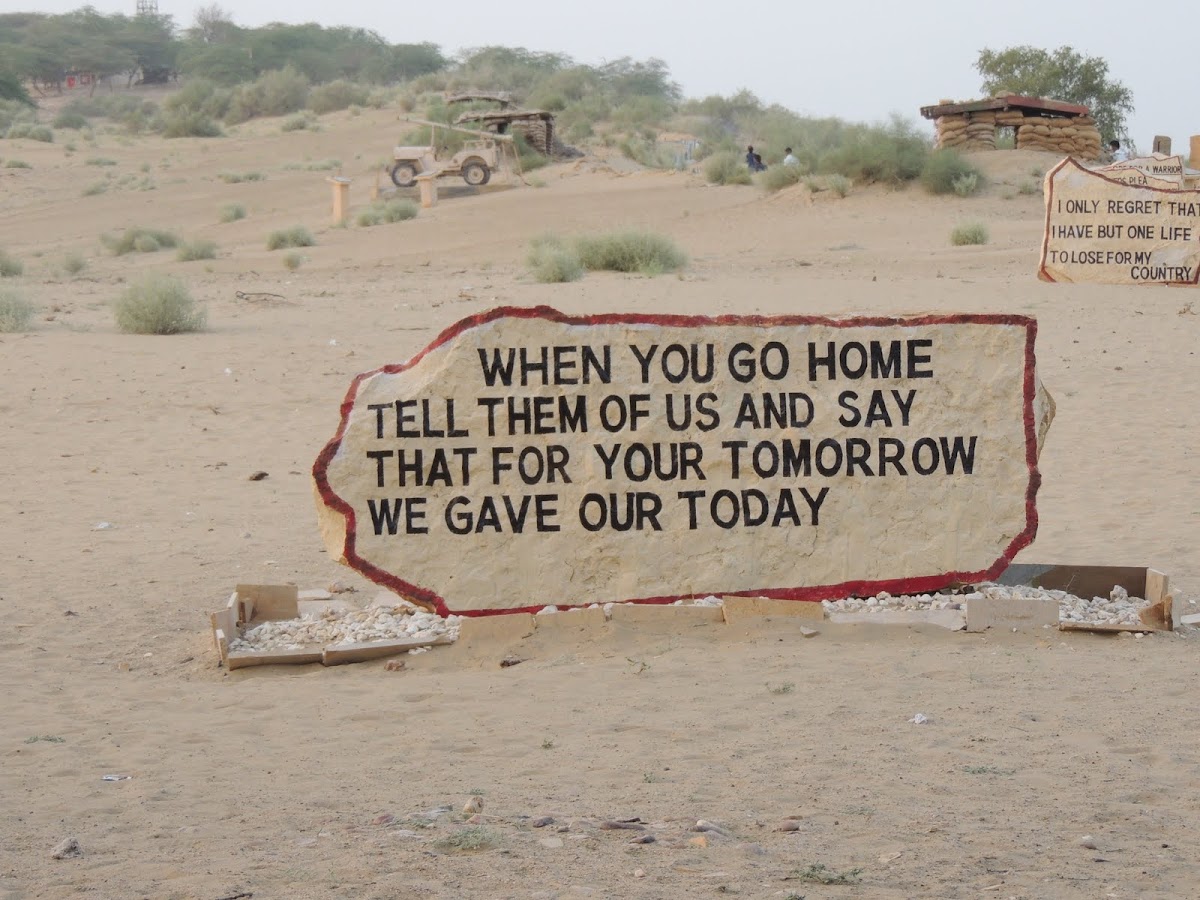 Most visitors to the site were locals, enjoying a day out. As I listened to them discuss the movie, and try to associate the real soldiers with the characters who played them in the film, I wondered how much of it was based on facts. Was it indeed such a one-sided battle, as it appears from the memorial? Surely not, for we had casualties too.

Meanwhile, as I wandered around, reading about our brave soldiers, my son was enjoying himself, in his own way, reading the many quotations, imagining the battle, and asking questions about how the tanks and other artlillery would have been operated. We of course couldn’t answer any of his questions, which only led to more questions! It made me wish there had been someone there, who could have answered them! 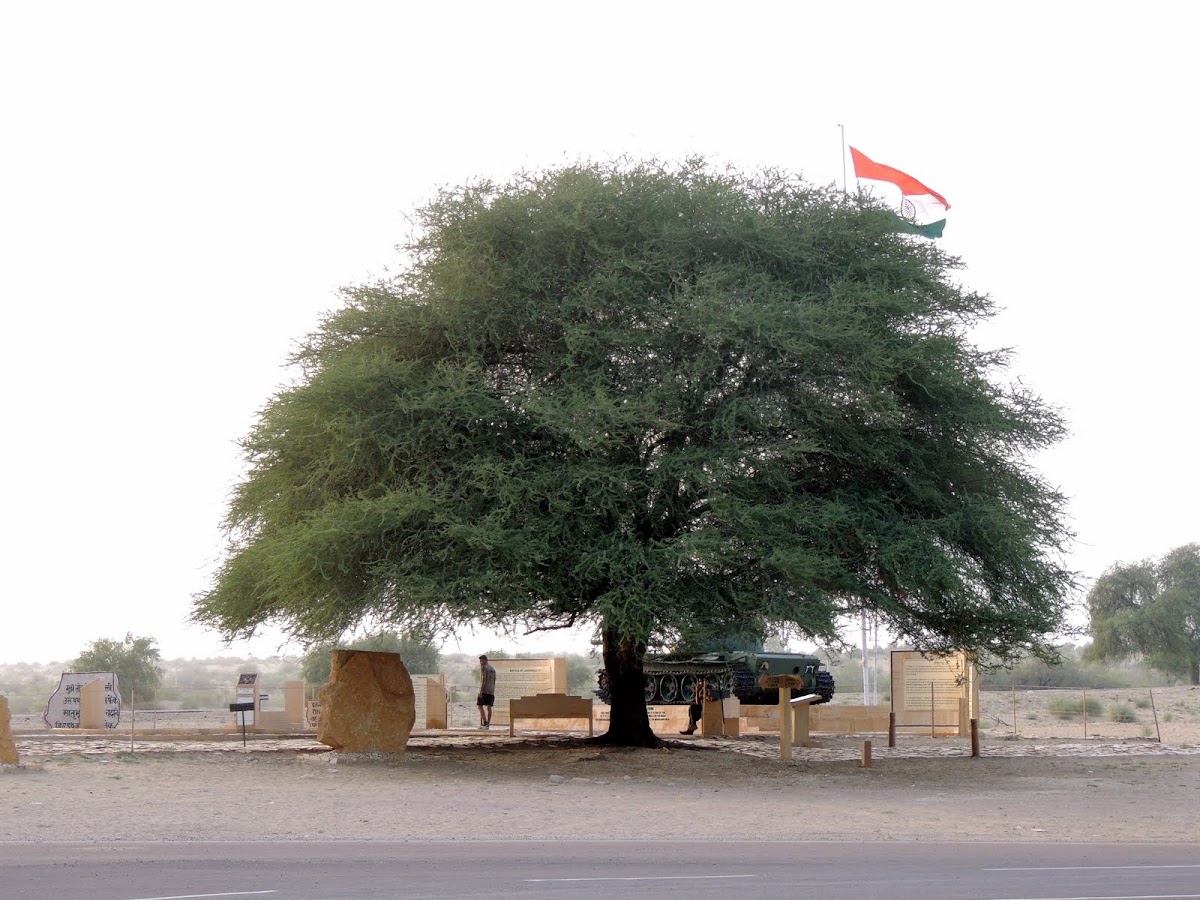 The War Memorial at Longewala could be called an Open Air Museum. Abandoned tanks and jeeps have been left on the sand, not as they were abandoned, but placed artistically to recreate the scene. A winding path takes us to all these, as well as a few bunkers. Both sides of the path are lined with the sayings and quotations I spoke about, earlier. There are memorials all over the place – to the individual soldiers, who laid down their lives, as well as memorials erected in the memory of the battle itself, inscribed with the names of all those involved. 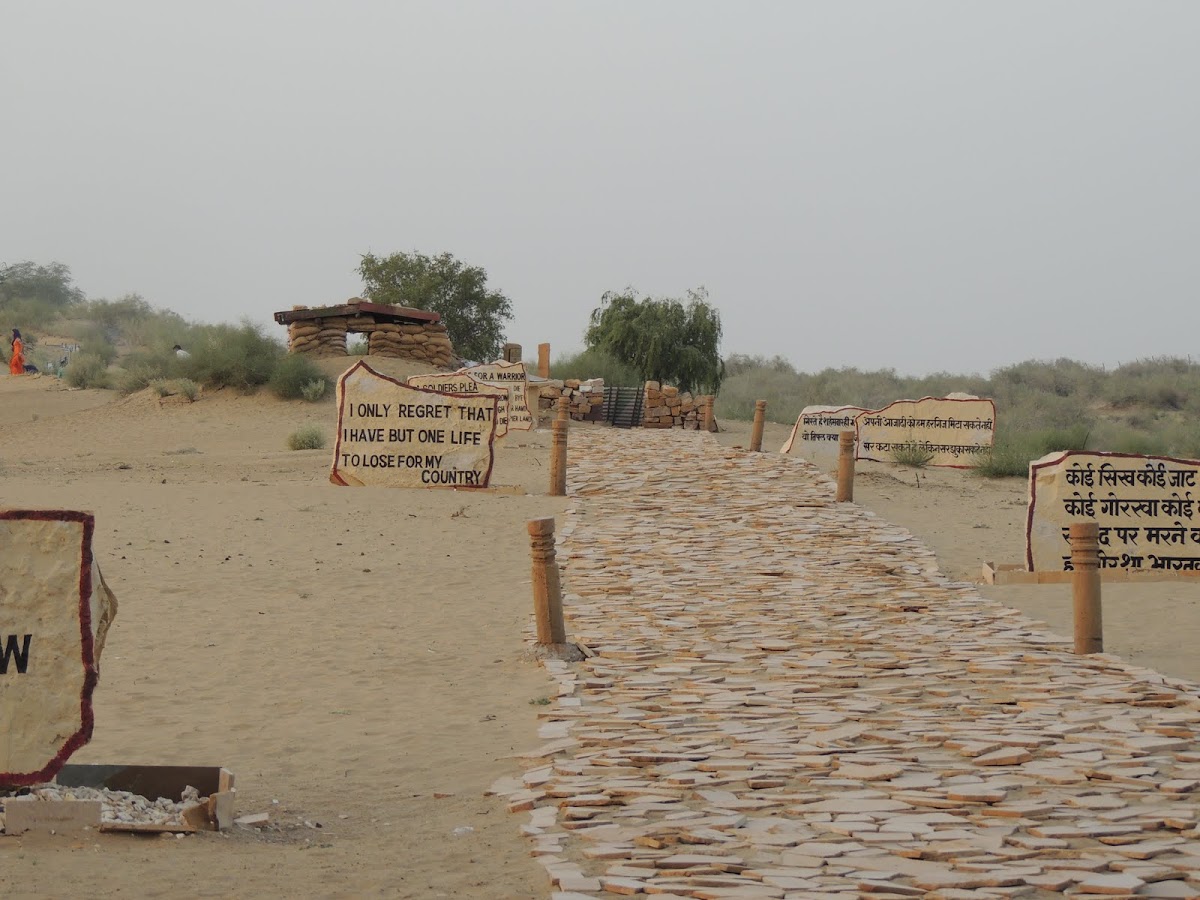 It was a moving experience, far more impressive than I would have imagined it to be. 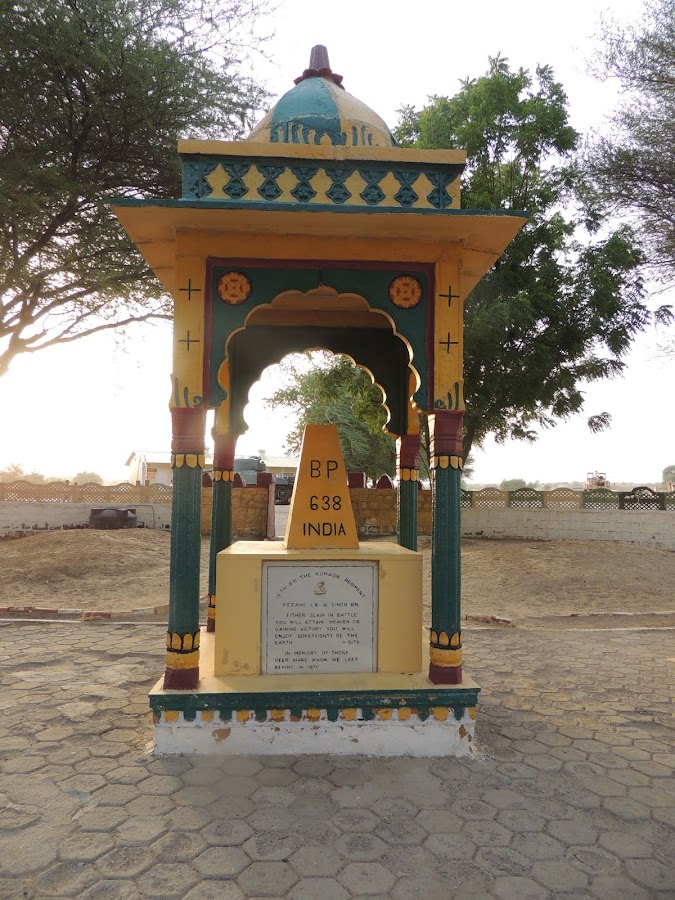 But above all, as I watched our Indian Flag, along with the flags of the company, flutter over the trees, I wondered how much has changed in the 45 intervening years. We are, once again, living in times of confrontation, with skirmishes along the border increasing every day. While this part of our border remains relatively secure, the line itself is more fragile than ever.

Our trip to the border at Jaisalmer had begun with a request from my son. For him, it was mere curiosity. for me, it was something else. To begin with, I object to the idea of the border as a tourist place. Not because of security or any such reasons, but because of the triviality with which we treat the site.

I first visited Wagah when I was a kid, when it was just a border check post and crossing. There was none of the drama then. Later, as an adult, seeing all that happens in the name of patriotism was a revolting sight. The situation at Nathu-la was better, but not too much. I saw tourists behave abominably, refusing to adhere to rules, and using the space as an excuse to shout out their patriotism. Naturally, I wasn’t too keen to visit another such site.

However, this time was different. For one thing, there were no crowds. For another, seeing our women soldiers patrol the border was an incredibly inspiring sight.  Even at Longewala, the silent narrative of the battle scene, remembered through the visual narrative of a film, was an interesting combination, but one that brought the place alive. 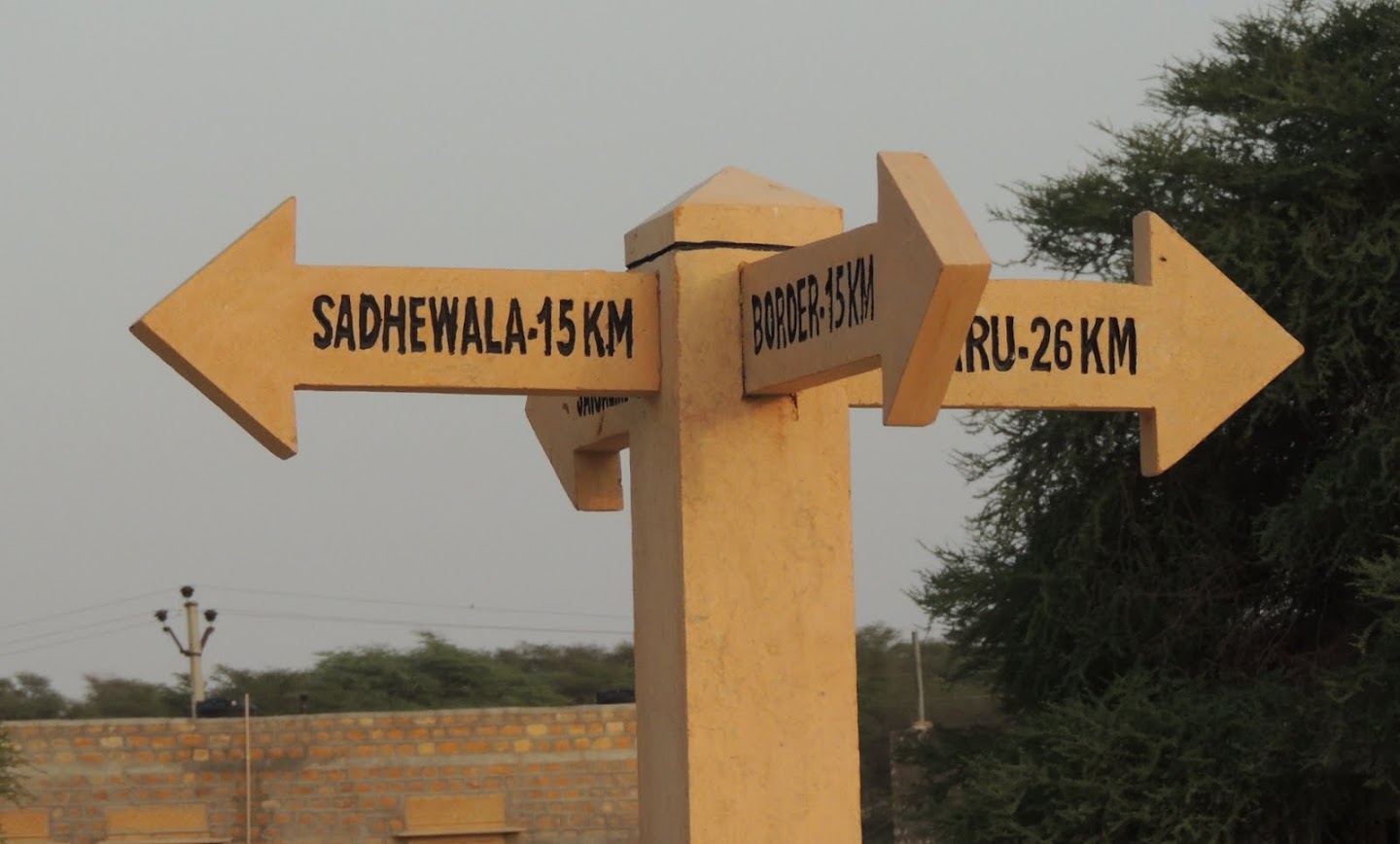 A very special and heartfelt Thank You to Suryagarh, for arranging this visit to the border sites. This wasn’t part of our original itinerary, but they arranged it just because Samhith wanted to go, and asked. Besides, they, in their inimitable manner, added to the experience, taking us to the War memorial as well, which I hadn’t even heard of earlier! These are some of our best memories of the trip, something that we will always cherish. For Samhith, this was the highlight of the trip, the one part that he has been talking about to anyone who will listen! As for me, I can only hope that the visit has instilled in him a healthy respect for our armed forces, and a more balanced idea of patriotism.


I visited Jaisalmer in September 2016 on invitation from Suryagarh, who tweaked our itinerary to suit our interests, adding their special touch to each trip. The experiences are all thanks to the wonderful people at Suryagarh, without whom it just wouldn’t have been the same, but the words and thoughts are all mine.