November 21, 2016
The first time I visited Jaisalmer, the sand dunes stretched before me, fascinating me with their contours, making me fall in love with the desert and its myriad patterns. The second time, it showed me a different side. It told me of the many stories that lay hidden beneath the sands, of times long gone, and the people who lived here. Earlier this year, as I set out for Jaisalmer once again, I wondered what the desert would show me this time.

If there is anything I have learnt from these three trips to Jaisalmer, and the Thar, it is that the desert isn’t just an expanse of sand. It is an ever-changing landscape, the summers as different as possible from the winters, with the monsoons adding their own inimitable touch.

If we had expected to see the wide expanse of sand we had seen on our first visit, we would have been disappointed. For this time, the predominant colour wasn’t brown, but a beautiful green – the result of heavy rains. Shrubs had sprouted everywhere, and we marvelled at these tough plants, taking root in what we believed was dry sand. We had to remind ourselves that this was, once upon a time, a riverbed, and though the river had disappeared, the water still flowed somewhere far beneath the surface.

As we drove across Jaisalmer, the extent of greenery visible was stunning. Our drivers themselves exclaimed at the change in the landscape within a few weeks, due to unusually heavy rains this year.

The greenery also ensured that we saw more of the animals which made the wilderness their home.

Camels of course, are part of the landscape, but seeing them graze in the verdant greenery which covered the sand, was a new experience!

But more surprising were the Nilgai, which appeared out of seemingly nowhere, when we were on our way towards the border. 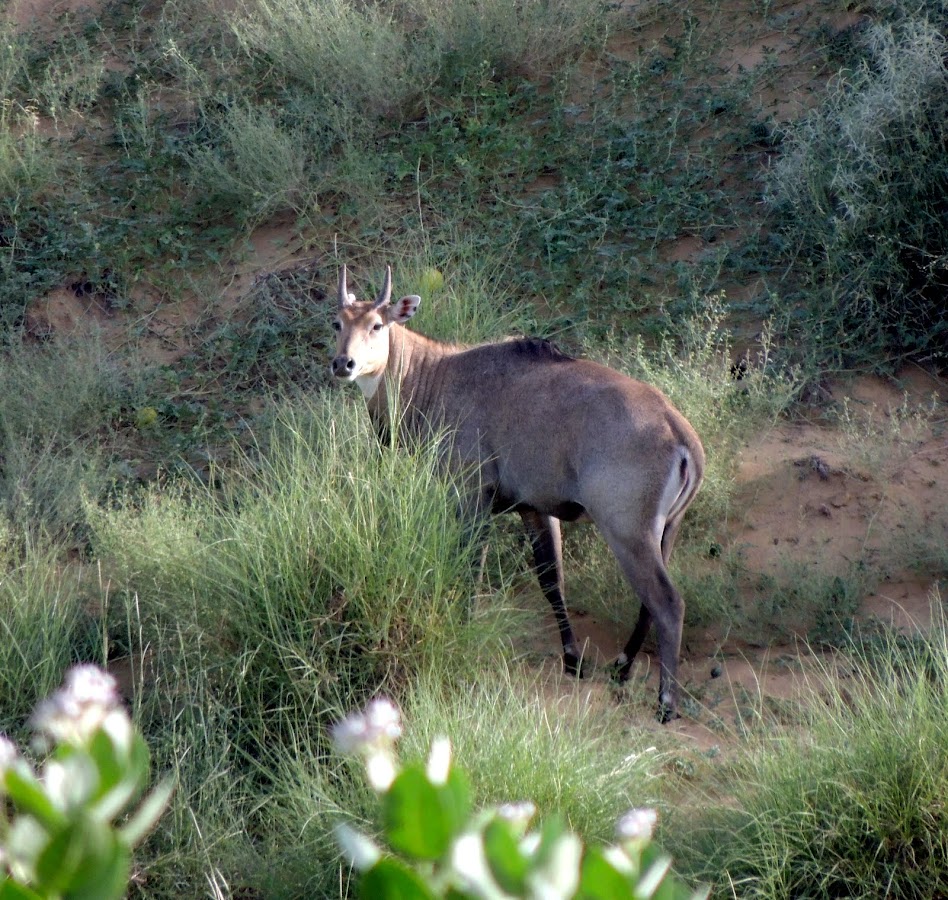 And Samhith was delighted when we spotted a gazelle, while passing the Desert National Park on our way to the temples of Kiradu! 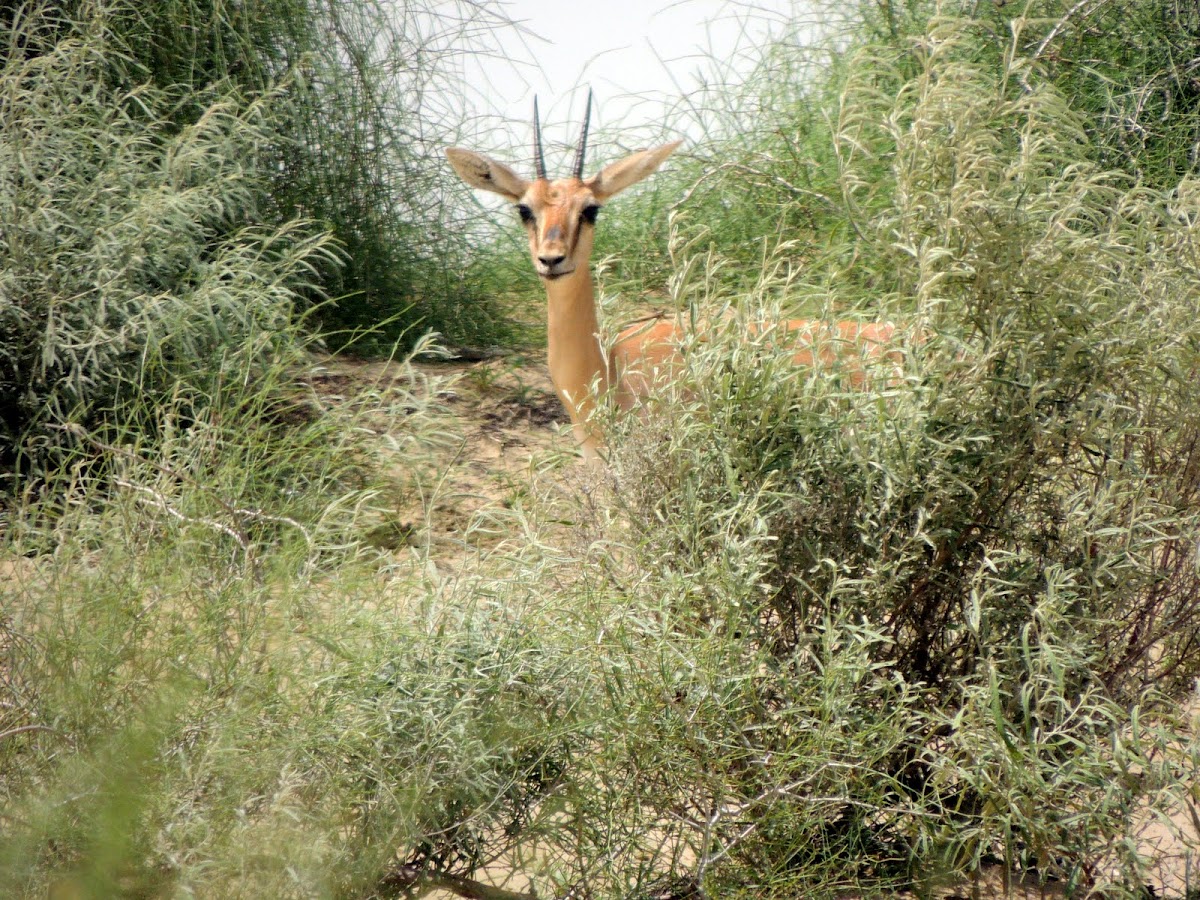 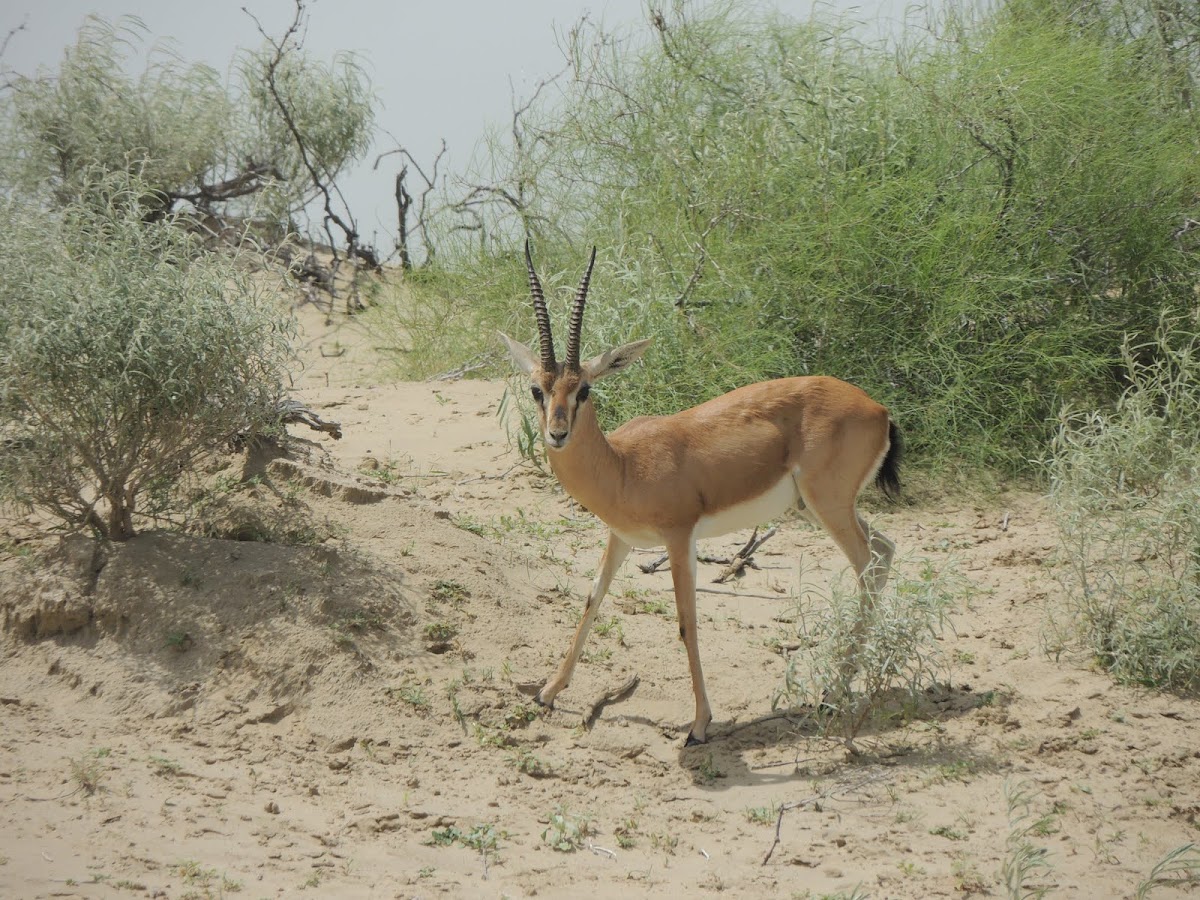 Then, there were the birds, of which we saw many, but clicked only a few, such as these vultures….

Then there were the ponds, where water had collected…. 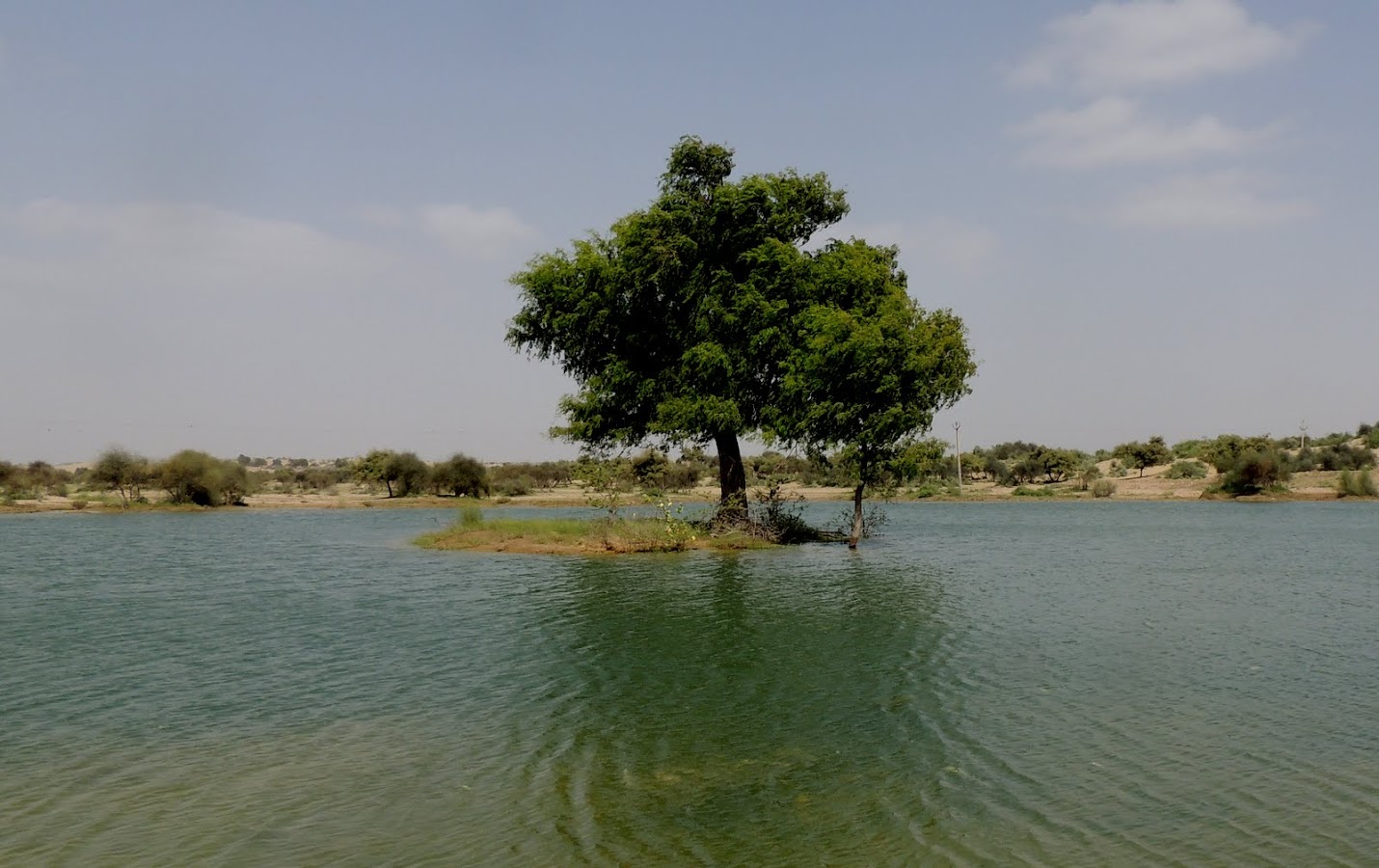 And where there is water, there are birds!

However, the best memory of all, is looking out for a shady tree on the dunes, and settling down under it, for a nice picnic lunch, packed for us by our wonderful hosts at Suryagarh.

What fun it was, to drive around, selecting a tree to sit under, and finally settling down on a rug. It took me back to my school days, which was the last time I actually went on a picnic! As for Samhith, picnics are no longer the same, so this was a completely new experience for him. We had expected a hamper, but as course after course appeared from the trunk of our car, our eyes widened, and we realised that there was no way we could eat it all!

We didn’t, of course, eat it all, our appetites being what they are. And neither did I click many photos, choosing instead to enjoy the experience.

We sat peacefully, oblivious to time passing by. We were literally all alone out there in the desert, for hardly any vehicles, or people came along the road.

But we weren’t really alone, and nor was it silent, for there were birds chirping, and flying around, probably wondering who was intruding into their idyllic life. Bulbuls twittered in the Ker bushes all around us, parakeets flew over, shrieking shrilly, a Long-tailed Shrike perched on a bush a little away from us, and a bird of prey swooped down in the distance, sighting, and probably capturing, a mouse.
And for once, we simply sat, enjoying the silence, the solitude, the seclusion, feeling no need to talk, or, even more important, to click. My camera lay by my side, forgotten, as we reveled in the moment.

It didn’t matter that the afternoon sun blazed over us, for we sat in the shade of the trees. It didn’t matter that time was passing by, for we had all day, and, for a change, no fixed itinerary. It didn’t feel like the desert, and yet, the sand stretched out in front of our eyes. It felt like we were, for the moment, suspended in time and space, completely at peace. Such moments never last very long, but their effect stays on, far longer. And that is what I have carried back home from my third trip to Jaisalmer.


I visited Jaisalmer in September 2016, at the invitation of Suryagarh, who very graciously hosted me and my family, planning trips for us so that we could visit places that we wanted to, since we had already visited Jaisalmer earlier.  They added to the sites, their signature experiences, such as the picnic I have described in this post, which turned out to be the highlights of our trip. Needless to say, my husband and son are now big fans of Suryagarh! Meanwhile, while the experiences are courtesy Suryagarh, these words are entirely my own!