My Suryagarh Experience - Once again!

The sound of bells caught our attention, and drew us towards the wide open doors. A simply decorated table stood at the entrance, and everyone seemed to be gathered around it. Nakul beckoned us to join them, and as we approached, we realized that it was the Ganesh Chaturthi puja in progress. 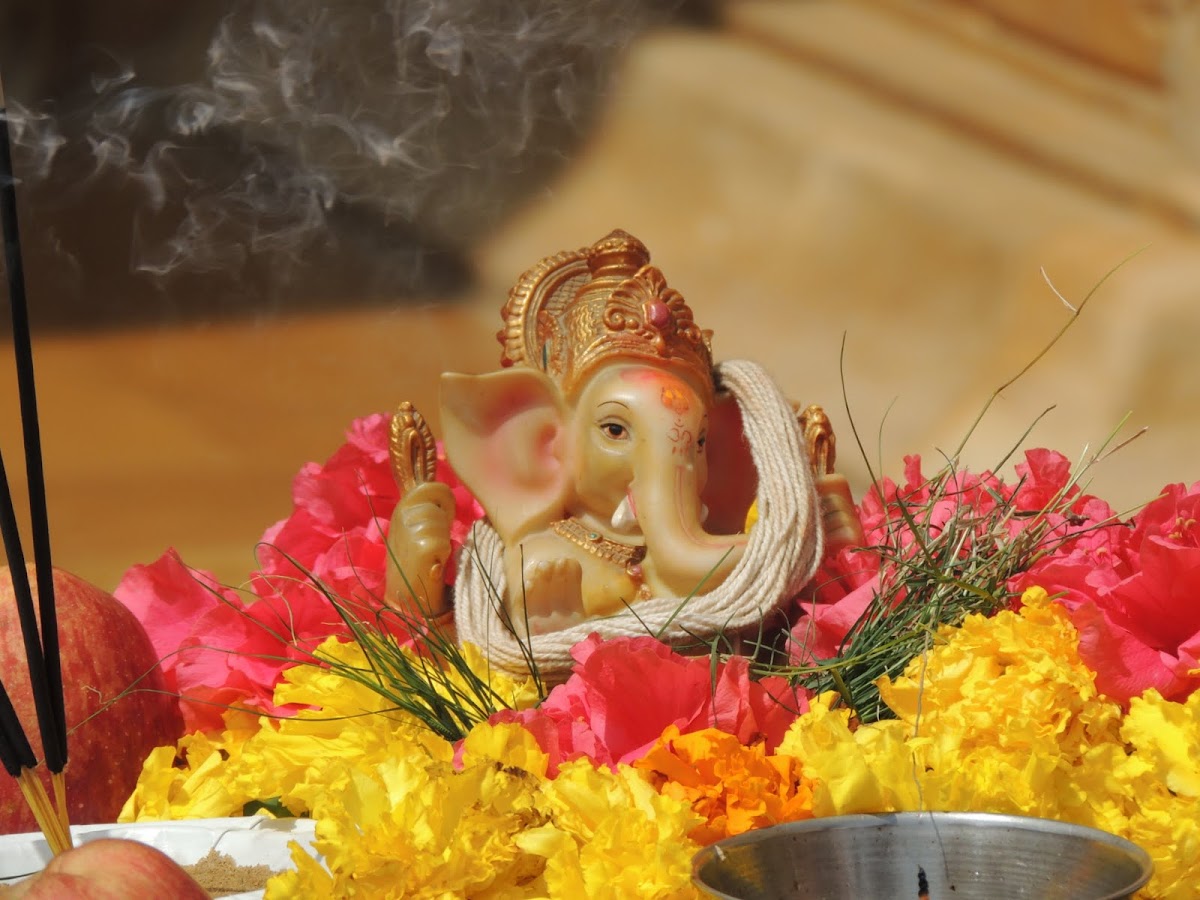 We had arrived at Suryagarh early that morning, and, in the course of our travels, had almost forgotten that it was Ganesh Chaturthi. As the priest chanted hymns, Shankar joined in, and someone handed Samhith the bell, which he rang with gusto! As I happily clicked away, I reflected on the course of events which had brought us here, to be a part of this intimate celebration.

I had first visited Suryagarh in 2014, with a group of fellow bloggers. That trip had opened my eyes to the many stories which lay buried beneath the desert sands. Receiving an invite to visit them again was a huge surprise, and it felt great, to be remembered. Unfortunately, the dates didn’t work out, so I had to decline, with a heavy heart. It was as an afterthought, that I asked them, very hesitantly, if I could come later, perhaps with my family. Their immediate response, welcoming me, and asking for possible dates, made me happier than ever. I already knew that any trip to Suryagarh would be special. I couldn’t wait to share the experience with my husband and son! 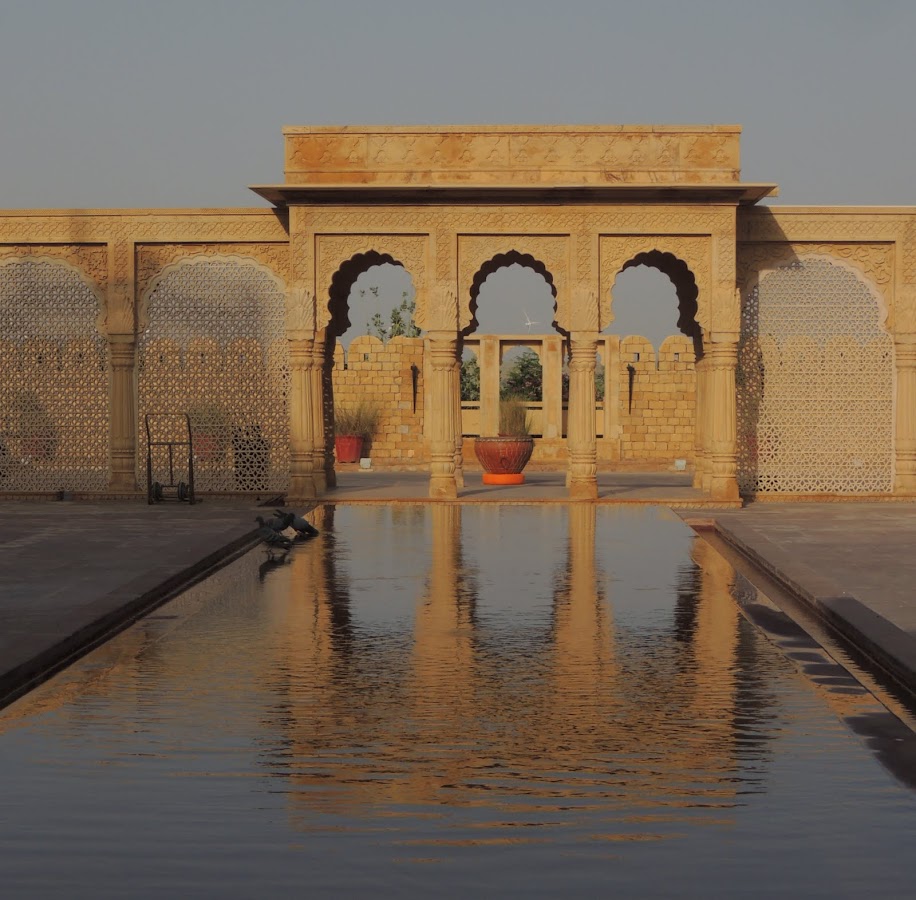 And now, here I was, with Shankar and Samhith, joining in the simple celebrations of one of our favourite festivals! And this, was just the beginning of what would turn out to be a memorable holiday.

I have already written about our explorations…. Of the greenery the desert showed us after the rains; of my thoughts during our visit to the border, and the Longewala War Memorial; of the connections which fell into place as I visited the cenotaphs at Bada Bagh, and the temples of Tanot Mata and Ghantiyali Mata; and finally, of the temples at Kiradu, which bewitched me with their beautiful sculptures.

Of Suryagarh itself, I can’t write enough, and my photos can never do it justice. Last time, I was in awe. This time, it felt so familiar. Besides, this time, it was all about my son, who felt right at home… whether in our luxurious suite, or out on the grounds, especially with the peacocks, doves, turtle, and Karan’s dogs!

As for the food, what can I say? They take hospitality to a different level, with course after course arriving during each meal, be it breakfast, lunch, dinner, or even High-Tea in the desert! I had told both Shankar and Samhith about the Breakfast with Peacocks and Dinner on the Dunes, from my last visit. Since it was just us now, and not a group, I didn’t really expect the same experience this time around. But, on our very first day, while we were on our way to the border, they managed to surprise us… with a massive, multi – course, picnic lunch, which we enjoyed, under the shade of a large tree on the dunes by the side of the road!

This was followed by an even grander experience the next day, when we headed towards Kiradu. The route took us through the Desert National Park, and we enjoyed the wonderfully lush side of the desert, spotting Nilgai and Gazelles along the way. And then, we suddenly went off the road, towards a tiny village (If I can call it that - it was just a group of houses) we wouldn’t even have noticed, where a grand High-Tea awaited us, in the cosy, yet cool, community hut right at the centre! We truly felt like royalty, as the men came to greet us, and children looked on curiously, peeping through the door / windows, and then running away when we noticed them! 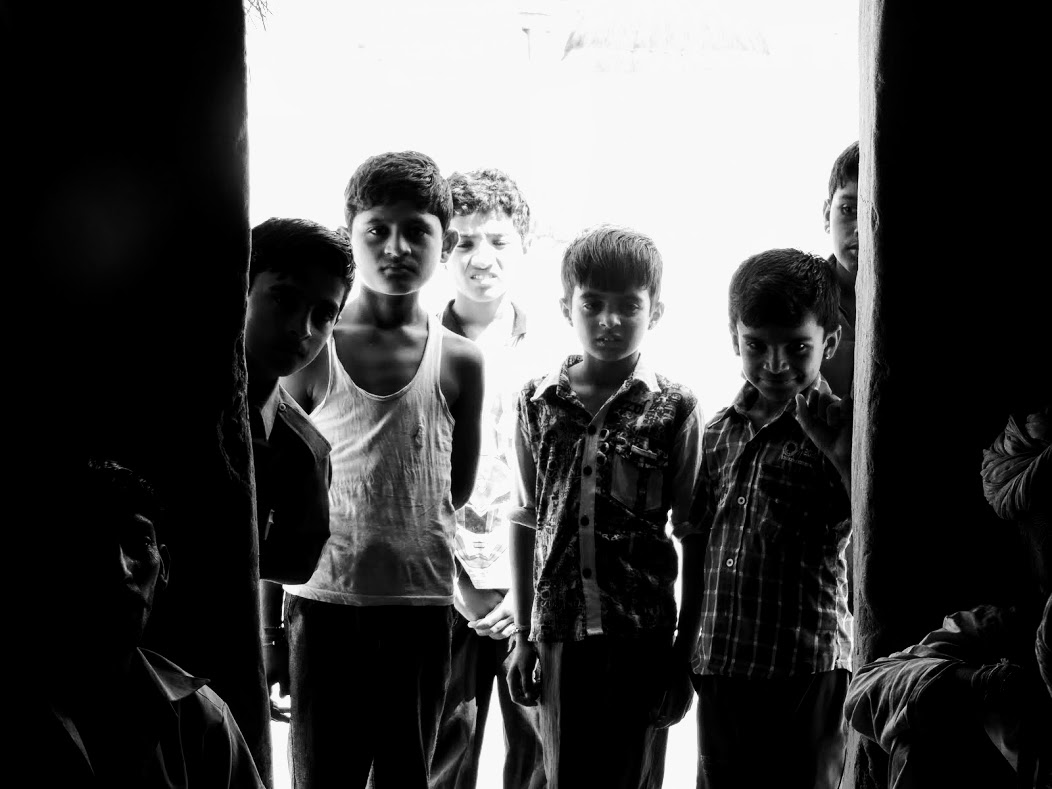 The houses, so simple, yet so functional, fascinated me, and when I went exploring, met the women, who were even more curious than the children, especially about my camera!

The conversations took some time (and a lot of translation!), but once we got started, it was interesting to listen to their stories, of their ancestors coming from across the border, and settling here, of the present conditions, their traditions, and their hopes for the future.  More fascinating was seeing their interaction with the Suryagarh staff, which spoke volumes of the relationship that had been built. My respect for Suryagarh and its people, rose a notch higher.

I had already heard from Sudha about the new Stay Well programme, introduced under the guidance of Sangeeta Khanna, and looked forward to it. However, it was Shankar who truly enjoyed the new menu, while I cautiously tried out a few items. (As an aside, he has been so impressed with the use of millets and local grains, as well as jaggery, that he has been insisting we change the way we cook at home as well! Sangeeta, I have been visiting your blogs a lot more often, trying to figure out new and alternate recipes! )

While Shankar enjoyed trying out the healthier version of the dishes, Samhith binged on the desserts, and the continental fare. From pizzas and pastas to burgers and pancakes, he got it all, and immensely enjoyed it too!

His favourite, however, was the Ghewar, which I had brought back for him during my first visit. This time around, he enjoyed it after every single meal! So you can imagine how thrilled he was, when Sunil packed up a big one for him to last through the return journey!

My only regret, when it came to the food at Suryagarh, was that we could, in no way, do any kind of justice to it! Among the three of us, it is only Shankar who is a foodie, and one who can consume a full, multi-course meal, Yet, even he, after one particularly heavy meal, remarked wryly, that he hadn’t been this pampered with food, even at my mom’s place, where, as the son-in-law, he gets way more attention than I do! 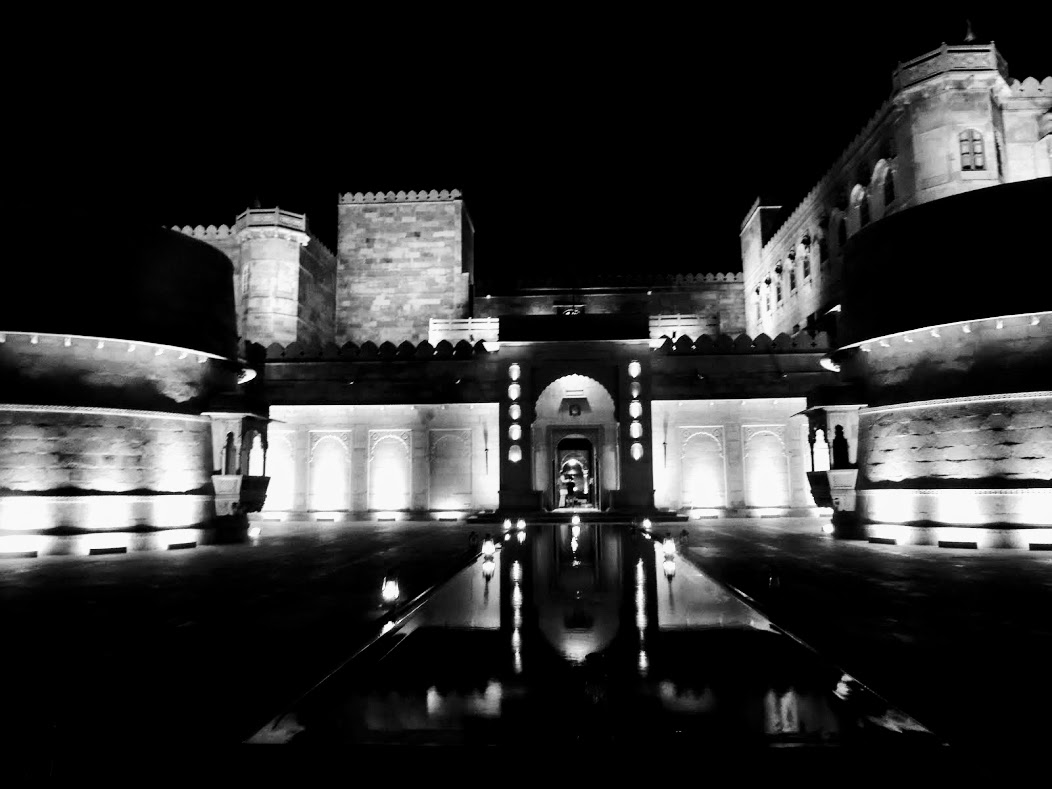 Music is a big part of the Suryagarh experience, which connects us to the region, and heightens our emotions. On my earlier visit, I had enjoyed listening to the harmonious tunes of the local musicians employed by Suryagarh, but now I also enjoyed the sight of my husband getting immersed in the music, and losing track of time. Only a few things really move him, and the music at Suryagarh undoubtedly did! 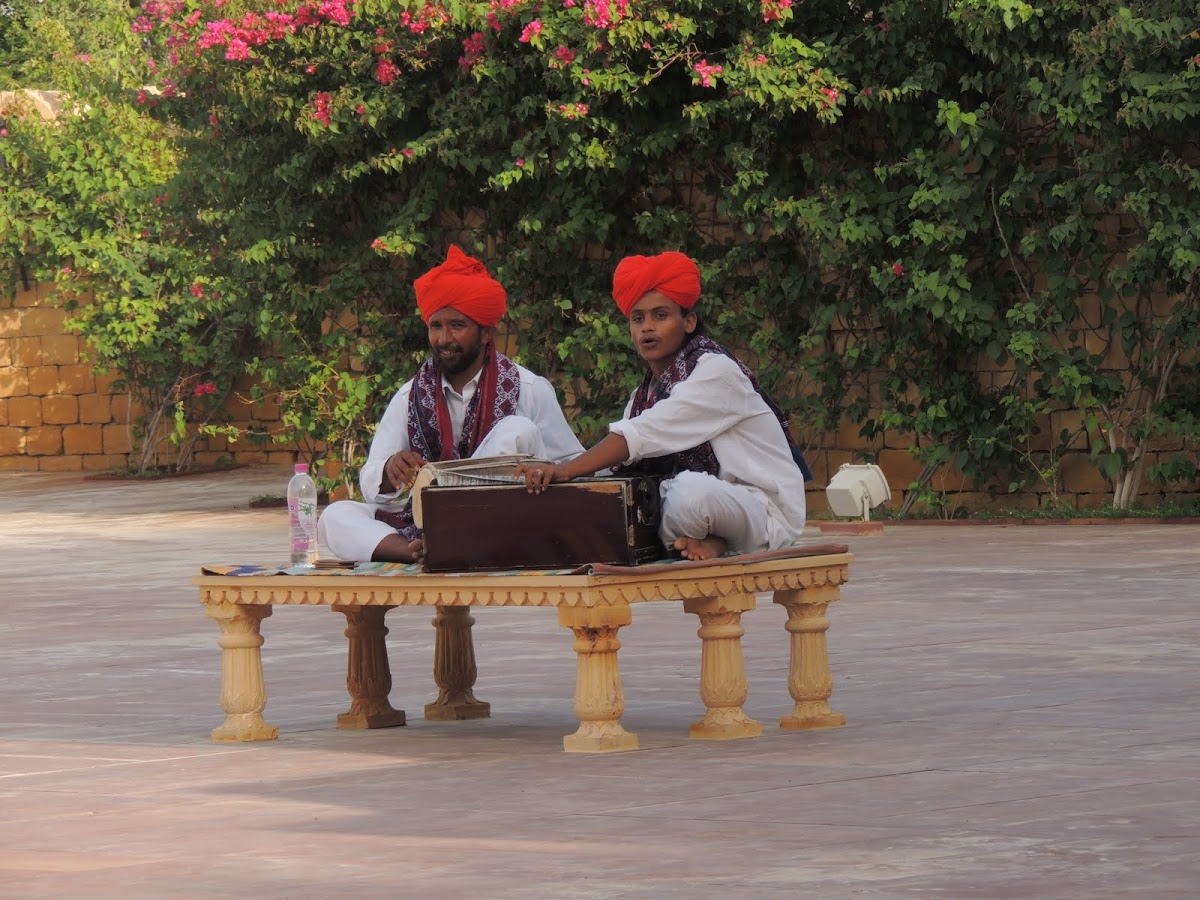 Each of these are great experiences, with the distinct Suryagarh touch. However, what sets Suryagarh apart, and makes it so special, at least for me, is something else.

When we arrived at Suryagarh, I had a bad cold, thanks to the change in weather. On the best of days, I suffer from motion sickness, especially on long road journeys. Much as I enjoyed the trip to Kiradu, the journey did take its toll, and on our way back, when we stopped for chai, I finally threw up, scaring everyone but Shankar, who is used to it by now! Sunil, who had accompanied us that day, was especially worried, despite my reassurances that I was ok. I headed straight up to the room, declining dinner, only to find hot soup and kaadha (a herbal concoction) waiting for me! It was just what I needed, and I was much better by the next morning. Even then, Sunil, and the others (surely instigated by him J) brought me kaadha with every meal! Needless to say, I was perfectly fine by the time we left!

Resorts might have medicines handy for an emergency, but where else do you think you can find the staff making you a kaadha when you are sick? Is it any wonder that I love the place and its people?

Further, both Nakul and Sunil insisted that I had to try their spa this time. Spas are generally not my thing, but when Mahesh, the Spa Manager turned up, insisting that I try them out, and see how my cold disappeared, I felt it would be churlish to refuse, and meekly nodded my head. Shankar and I set off for a spa session, while Sunil kept Samhith entertained at the pool. The next couple of hours were absolute bliss, and I fell asleep, wrapped in layers of salt from the Luni river, and woke up more relaxed than I have been in a long time!

Experiences like these are what make a trip with Suryagarh memorable. However, it is the people who make the experience special. They make hospitality seem effortless, but behind the scenes is a frenzy of activity – both in planning and execution – to ensure that each experience is flawless.

On our last evening at Suryagarh, as we sat on the dunes at Lakhmana, enjoying the solitude, the sand, and the sunset, I reflected on our trip, and what I would write about it. Watching the sand ripple like waves on the dunes, I wondered if this was truly luxury – the privilege to enjoy nature, in peace.

Which is why my post isn’t about the opulence or the grandeur of Suryagarh (which it has, in plenty), but my experiences, which make a stay at Suryagarh, for me, sheer luxury!

On the sand dunes of Lakhmana near Jaisalmer, watching the wind blow on the sand is a fascinating sight. #sand #dunes #Jaisalmer #desert #suryagarh #thar
A video posted by Anuradha Shankar (@anushankarn) on Sep 7, 2016 at 6:19am PDT

I had felt honoured to be invited again, and it felt wonderful to be there. But at the end, it was a humbling experience as well, reminding me that I had much to live up to!

A very special thank you once again to Suryagarh, for inviting us, and helping us build such wonderful memories.

Disclaimer: I was invited to stay at Suryagarh in September 2016 with my family, and we combined the stay with a personal and long planned trip to Bikaner. Our stay was sponsored by Suryagarh, who also curated all our experiences at Jaisalmer. Needless to say, while the credit for the experiences goes to Suryagarh, the words are all my own!