March 15, 2017
Temples are more than just places of worship. They are monuments which speak of the people who built them, and those who came to worship in them, their beliefs, and their faith.  Like any other city in India, Bikaner too has its share of temples, each of which has its own story, its own importance, and its own place, in the social structure of the city. During my recent visit to Bikaner with Narendra Bhawan, I visited four temples, which are inextricably linked to Bikaner, and its growth. I am starting the series today, with what is probably the most famous temple in Bikaner – the Karni Mata Temple.

The Karni Mata temple is more popular as the ‘Rat Temple’, but there is more to the story than just rats. Karni Mata was a female ascetic of the 14th century, who is said to have greatly influenced Rao Bika, and the creation of Bikaner. It is believed that she met Rao Bika on his travels, and it was on her advice that he came to, and assumed rule over, the area we know today by his name, as Bikaner.

Karni Mata was from the Charan caste, a community of shepherds. Even today, the community here, who consider themselves her descendants, continue to herd sheep and cattle. A certain area of land around the village is not cultivated, though it is fertile, and instead, used as a pasture. Special grass is grown for the cattle they herd, and which roam free over these lands.

Karni Mata rose to fame during her own lifetime, which, according to many accounts, lasted between 120 to 150 years! She performed many miracles, and advised all who came to her, from the kings, to her own clansmen.

Her main claim to fame, however, is bringing her step son back to life. When her step son died, she is said to have gone to the Lord of Death, and demanded his life back. The god obliged, but sent him back as a white rat! Unfazed, she declared that her entire community would be reborn as rats, to give him company! It is the belief here, that all rats in the temple are members of the community who have passed on, and have been reborn in this form. The reverse holds true too, with the rats dying and being reborn into the caste! Thus, as the belief continues, the numbers of the Charan community, and the rats, are always in balance!

Whatever the reason, or the belief, the temple is overrun with rats, which is not just bizarre, but also creepy, though not a single one is to be seen outside the temple walls! 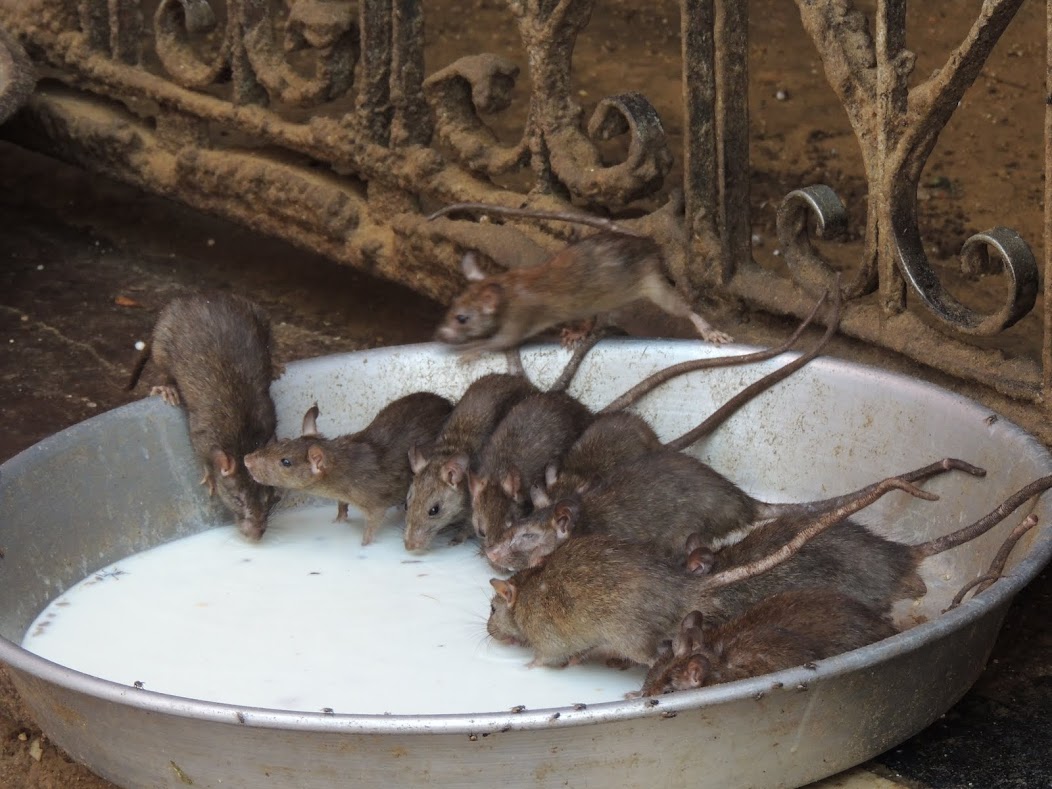 An interesting custom at the temple is that members of the community take turns playing the local version of the drums, constantly, without a break, from the time the temple opens, to the time the doors are shut. They possess a repertoire of folk songs, especially related to Karni Mata, which they play on request. 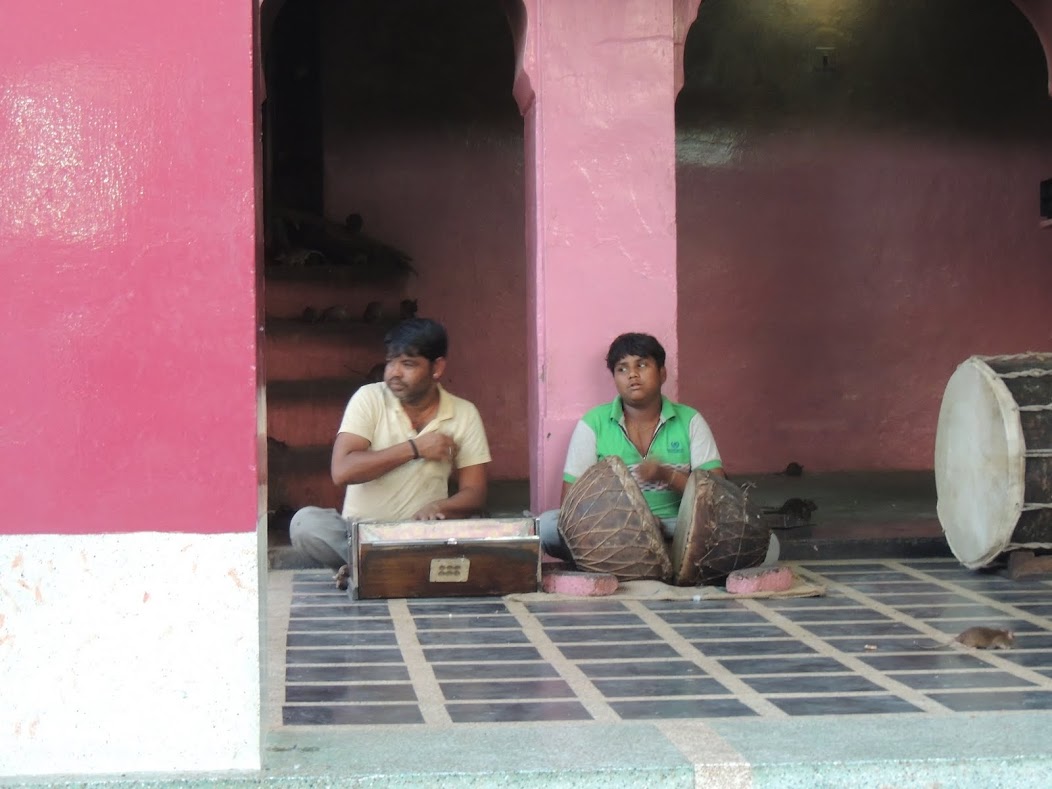 The main sanctum of the temple encloses a cave-like structure, where Karni Mata is believed to have sat in meditation. The rocks are still clearly visible from the outside. The temple itself was first built in 1573, though it has been expanded and renovated a number of times over the years. Part of the present structure was constructed by Maharaj Ganga Singh in the early 1900s, and further expansion work is on as I write this.

The temple is a large complex, with other shrines dedicated to her family members. However, the most interesting shrine here is one to the seven sisters, whom I have written about earlier.

There is also a museum just outside the temple, which displays paintings telling stories of Karni Mata and her miracles.

Another interesting temple to Karni Mata stands about a mile away. Here, it is believed, she flung to the ground, a wooden churn used for churning buttermilk. The dry wood took root, and grew into a massive tree, which stands here even today. Under the tree is an image of Karni Mata, holding the churn. The temple is built around this shrine.


Disclaimer: These posts are based on two trips to Bikaner – the first one, a personal trip, and the second, when I was invited by Narendra Bhawan. While the first was an enjoyable experience with my family, I barely spent a day here, and while it was enough to see the sights, it was too quick to leave an impression.
The second trip, which was on invitation from Narendra Bhawan, filled the gaps and added a context to all that I had seen before, which actually helped me write. While the experiences are courtesy Narendra Bhawan, the words are, needless to say, all my own!