April 10, 2017
From the outside, it appears to be a Haveli. The traditional architecture, with red sandstone, is seen all over Bikaner. It is only when we step in, that we realise that there is more to Narendra Bhawan than meets the eye!

The original structure here was the residence of the last king of Bikaner. Yet, it wasn’t a palace, but his home, where he lived, surrounded by memorabilia from across the world. Narendra Bhawan is built around this central structure, merging seamlessly with an eclectic design, which is a blend of the traditional and the modern. In many ways, Narendra Bhawan reflects the Royal Legacy of Bikaner itself, which merges the Rajput traditions with Mughal, as well as European influences, to create a rich and vibrant style, which is unique to the city.

There are stories everywhere, from the rooms to the decor.

The rooms are conceptualised on the different aspects and phases of life, of the king who lived here. The Prince Rooms speak of the young man who was influenced by an European lifestyle; the Regimental rooms remind us that he was, at heart, a soldier, the last scion of a family of warriors; and the India Rooms, as the name suggests, have a nationalistic feel to them, with the predominant use of the colour Indigo, along with the charkha, khadi and jute.

The name of the restaurant, Pearls and Chiffon, conjures up images of elegant queens in the ubiquitous chiffon sarees, and strings of pearls around their neck. The Mad Hatter Bakehouse has bowls and jars designed in the Alice in Wonderland theme. The verandah, themed in the Art Deco style, has rows of bookcases, mirrors, and delicate Chinese Jars, with Portuguese tiles on the floor, tribal artwork and textiles on the walls, and modern furniture!

The Diwali Chowk, on the second floor, is an open space, resembling a courtyard. It is only when we go over the entire structure, that we realise, that this is actually the roof, of the original house!

While I admired the décor, I fell in love with some of the most unexpected things.

To begin with, on the walls, both, in some of the rooms as well as corridors, were these framed covers embroidered with beads. This traditional artwork is not something we see very often these days, and it was very interesting to hear that these were part of the royal wedding, and arrived, covering the gifts offered by the citizens to their king!

Then, there were the books!

The glass display cases house the entire Penguin Classics Collection. But, what I loved were the books, strewn atop the bookcases, and the tables. There were a variety of coffee table books here, and I especially enjoyed browsing through the ones on Indian art.

However, the surprise elements were these….

…Copies of the Horizon Magazine, which was published in the United States from 1958 to 1989. To be honest, I hadn’t even heard of this magazine, and it was Siddharth, the VP of the group, who, seeing me curled up on one of the sofas, engrossed in a book, showed me these, assuring me that I would find them an interesting read. So, as you can imagine, I spent almost all the free time I had, with my nose buried in the magazines, trying to read as much as I could, in the short time I spent here! Believe me, reading them was an inspiration, and I hope I go back to Narendra Bhawan someday again, to read all the issues I didn’t have time for, on this visit!

Then, there were the small touches, which I appreciated, like fresh fruits in the room, and fabric patterned with birds. 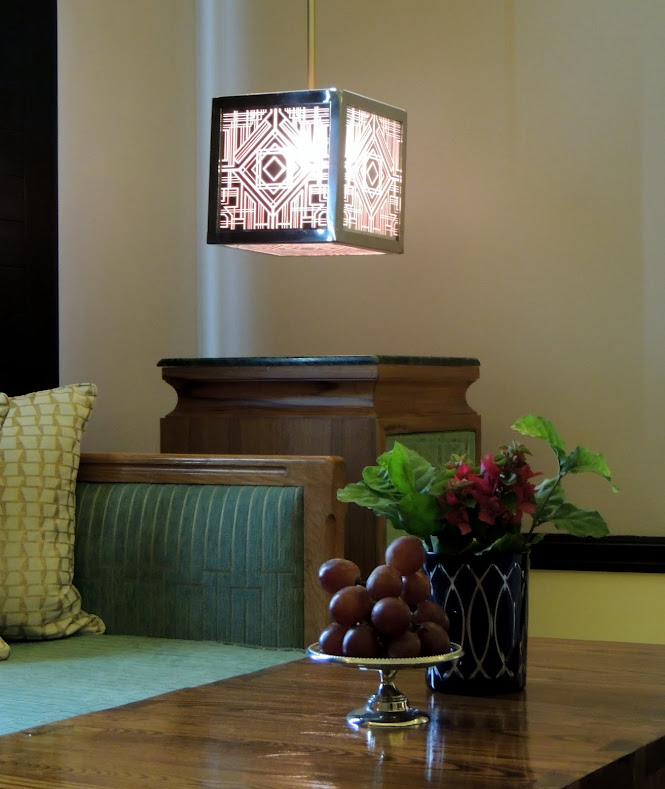 And Napkins, embroidered with butterflies. 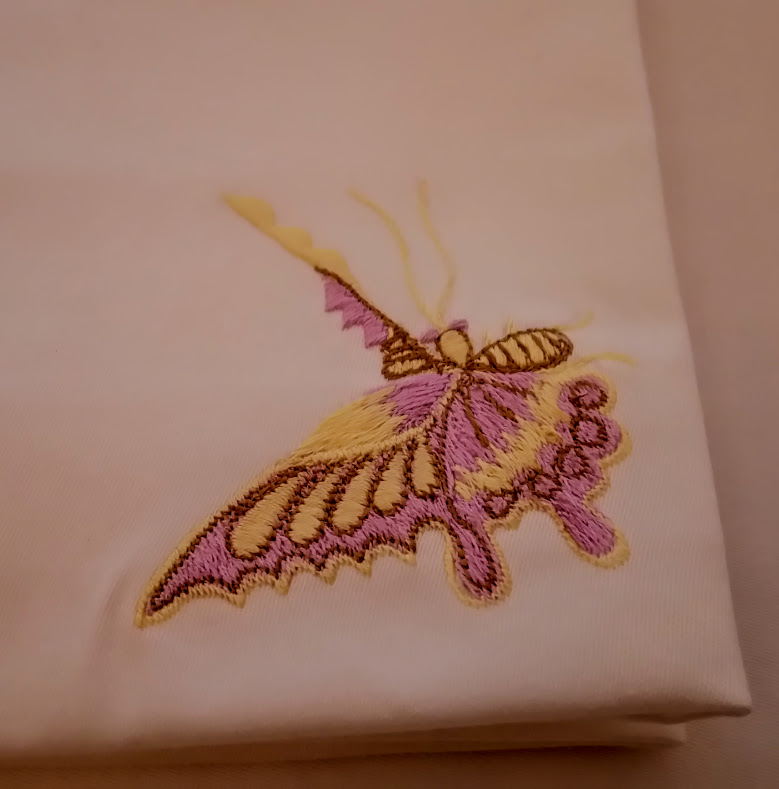 These marble gomukhs were an interesting addition by the poolside, reminding me that once, pools had water spouts shaped like this. 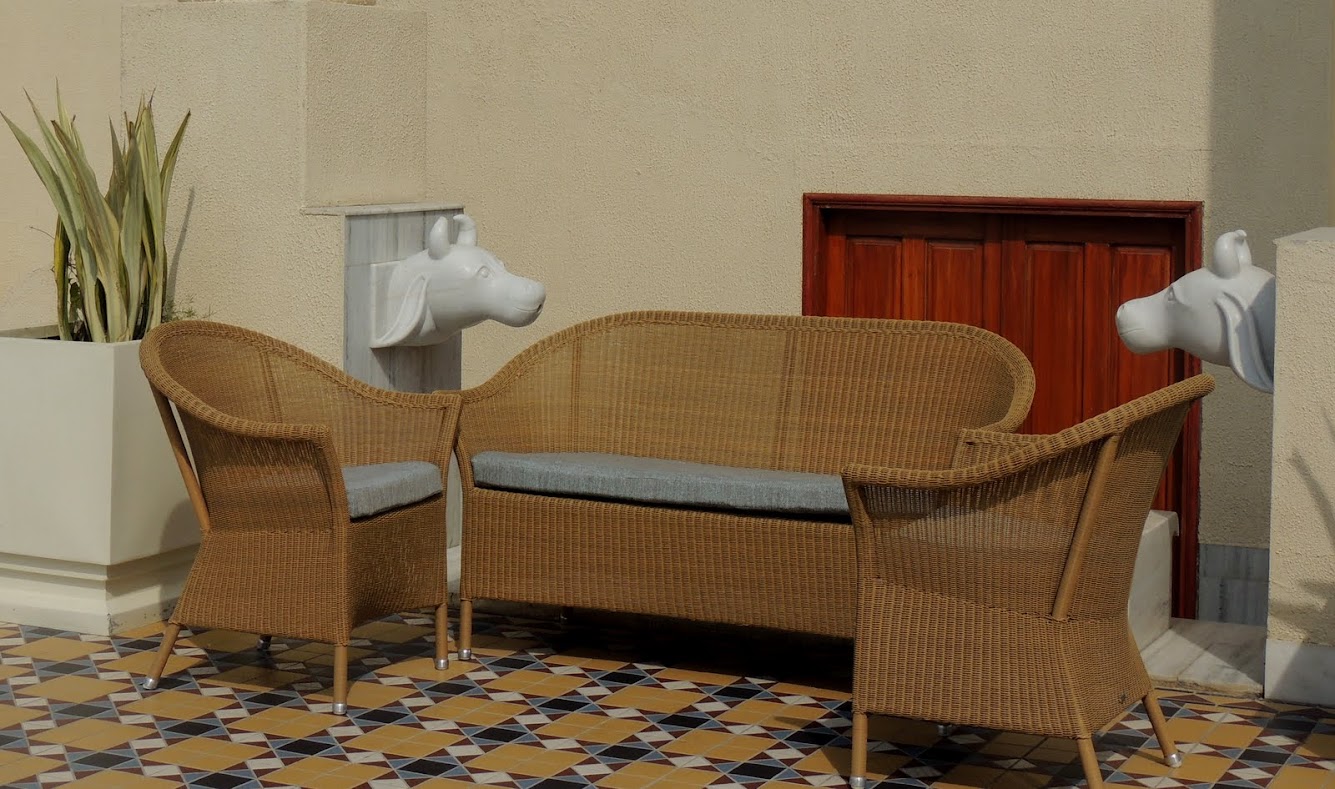 As for Eton, the cute little Golden Retriever, he, more than anything made me miss my son, who would have so loved to play with him! 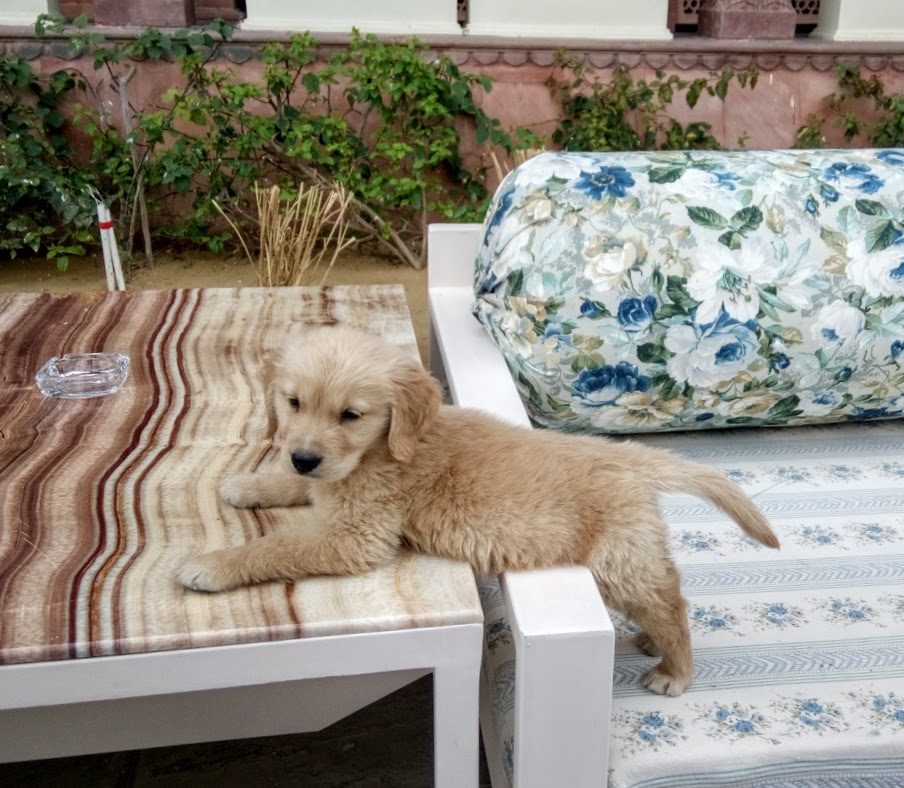 However, there is more to my Narendra Bhawan experience than the stay.

First, there were the conversations, with my fellow guests, as well as Siddharth, and Faisal, the Area GM. The topics ranged from politics to ideologies, and there wasn’t a moment when it lagged. Then, there was their inventiveness, conjuring up non-alcoholic and warm drinks for me (since I was plagued by a bad cold, and anyway don’t drink alcohol), both, within the property, in the Gaushala, where we lingered over conversations before meals, and during Sundowners on the pastures.

The Sundowner was an interesting experience, with conversations (over drinks of course), with the local folk music in the background, watching the sun go down, and then listening to a train pass, its whistle shattering the peace, yet invisible in the darkness.

As for the food, every meal was impressive and memorable, though, as usual, I wasn’t able to do justice to any of them, despite my prior experience with Suryagarh. And yes, as usual, I rarely remembered to click before I ate, which is why, I have too few images of the food!

While the meals at the hotel were wonderful, there were two which stand out – the Jain thali during the Merchants Exploration, and the dinner on the lawns of the Laxmi Niwas Palace.

While all these were unforgettable, what truly made this trip to Bikaner special, were the trails.

Whether it was the Merchants Exploration, or the RoyalExploration, or the visit to the Karni Mata and other temples, it was the wealth of insight, which stood out. Having visited Bikaner earlier, and having ‘seen the sights’, I especially appreciated this, since it explained a lot of things, and put them in context. The fact that Ram, who accompanied us, was from Bikaner, added to the authenticity of our experience, and added a local flavour as well. And yes, it helped that he knew the city inside out, because we only managed to do some shopping in the city, on a day when the shops were all closed, thanks to him!

The general idea, when it comes to Bikaner, is that there is too little to see, and that it can easily be ‘done’ in a day. This was what I thought too, when I first visited Bikaner. To sum up my experience with Narendra Bhawan, let me admit, that I was wrong.

Somewhere between the well planned trails, where the food and conversations played just as important a part as the place, to the luxurious, yet home-like comfort and mouth-watering cuisine at the hotel, I realised that there is much more to Bikaner, so much more that I would like to explore, that three days are barely enough to scratch the surface of this interesting city, and all the art, architecture and history that lies in and around it. And that, to me, is the greatest accomplishment of Narendra Bhawan, that it makes us want to explore more!