April 18, 2010
Binsar is well known for its variety of birds, and attracts plenty of bird watchers. So, I was all set with my binoculars and camera, ready to see as many as I could! Of course, with my digicam I had no hopes of great photos, but as usual, my enthusiasm remained undiminished!
The bird calls woke me up early every morning, and there was no need to set an alarm. We were close enough to nature for our natural clock to work perfectly. There was plenty to see and observe from the room itself, and I made the most of it……
Of all the birds, the bulbuls were the most prominent… there were just too many of them flying around! We saw both, the red vented ones and the white cheeked ones, and later, our bird watching guide explained that these were the Himalayan Bulbuls. I couldn’t see much difference between these and the ones which came to our balcony back home in , except that the mountain ones seemed healthier! 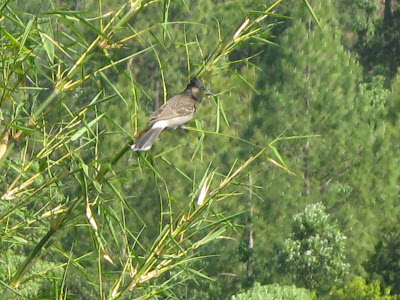 Apart from bulbuls, there were also plenty of Jungle Babblers, Hill Mynas and drongoes…. The hill mynas were completely black, unlike their city cousins…..

Once we shifted to the log hut, I saw many more birds, most of which I could neither identify nor take photographs of, since they were so much faster than me and my simple camera…. It really is high time I buy a new one!
This beautiful plum headed parakeet was really helpful in arousing Samhith early! It was patient enough to sit still till my sleepy son woke up and opened his eyes and had a good, long look at the beautiful bird outside our window!

I also saw a Hoopoe for the first time……. one appeared outside our window for a while and I did manage to get a snap, though not a good one, and it was gone before Samhith arrived, which irritated him no end. Thankfully, we saw another one the next day, and it was patient enough to pose for a snap while my son jumped around, excited at seeing a ‘new’ bird!
The next day, we heard the call of the koel and managed to spot it and take a snap. Samhith wasn’t really impressed, saying that we could see it at home! While I agreed with him, I pointed out that we could hardly have got such a good and close shot at home, something which appeased him for a while!
The fact that we saw so many birds from the room motivated us to go looking for more…. And we signed up for a bird watching trek… but more about that in the next post……