A Hectic Weekend Part 2 - Getting lost and finding birds.....

April 30, 2010
It’s been a while since I wrote my last post, and I have loads and loads of stuff to put up! So many things have come up recently, including an interesting freelance assignment that I shall write about soon! Meanwhile, I just hope I don’t forget all the interesting things I want to tell you before I get time to write them down!

Getting back to the last weekend, here is the second part of the series – our Sunday adventure. As I mentioned in the first part, we had returned late on Saturday, with no energy left to make plans for the Sunday birding programme…. To continue…..
I was doubtful about going for the birding at Nerul the next morning, but when the alarm went off, I was pleasantly surprised to see Samhith wake up enthusiastically. When I asked him if he really wanted to get up so early on a Sunday, and also reminded him that on no account could he miss school on Monday, he said, “But Amma, Aadesh uncle said this was the last chance to see the water birds…… we have to wait another year if we miss today….. Also, we are going to Nerul, not to Sewri, so it is a new place…. If it was Sewri, I would sleep, because I have already been there twice. So let’s go… its all right… I will go to school too” really, he can be quite the adult at times, and I had to agree with his logic and got ready for the journey.
We started off a little later than needed, since I refused to leave without fortifying myself with coffee. Of course, Murphy’s law had to work, with no autos available when most needed, and the only chaps available refusing to come for such a short distance as the station. We wasted some precious time looking for autos and finally found one only on the main road, and even he seemed to be reluctant to come, but this time I simply got in, and he started off, albeit grumbling a little!
This seemed to set the mood for the day, and we found ourselves missing a train as we waited for tickets, and then had to wait for 15 minutes for the next one! Even at Nerul, the auto chaps were reluctant to take us to the meeting place, saying that they wouldn’t get any passengers for the return journey. We managed to finally persuade one of them to take us, promising him some extra money.
Here is where chaos set in, for we reached the place only to discover (as expected) that the group had left for the water body from the meeting point! I finally called them up and asked for directions (since I had stupidly left the directions behind, hoping to meet the group at the meeting point itself). The instructions were quite clear, but our auto chap complicated matters by insisting that there was no water body in that direction, but there was one in the opposite direction! I should have stuck to the directions, and my instinct, but this was surely not my day, since I gave in to his argument and agreed to go the other way! he did take me to a water body – a huge lake with some birds – just a few minutes away, but it was unfortunately the wrong one!
Letting the auto chap leave, I decided to walk, but somehow missed the line of cars standing on the opposite side of the road on the way, and spent another half an hour searching for them!
Leaving out further details and boring you further, let me just say that at last my run of bad luck ran out and I spotted the cars and the group, and headed towards them! Unfortunately, they were just dismantling their telescopes and heading towards the sea shore, so we missed seeing lots and lots of waders in their breeding plumage!
However, you can see beautiful shots of the birds on Alok’s blog. It makes me wish I had reached on time!
We moved towards the shore, and did see a few more birds, but they were too far to be captured by my camera! We were so tired with all our roaming around, that we took but few photographs…… here are some of them… 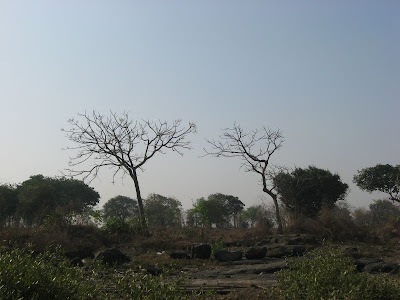 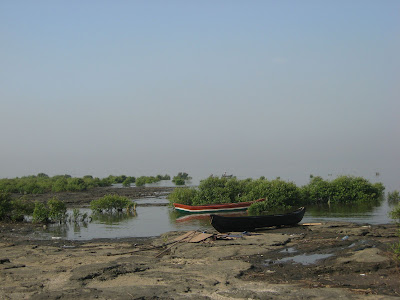 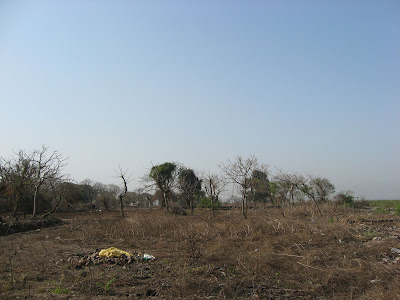 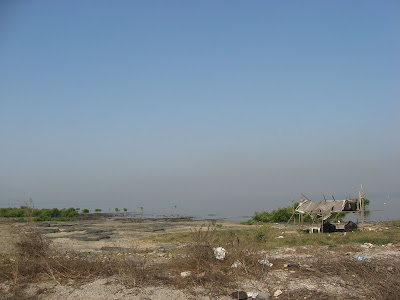 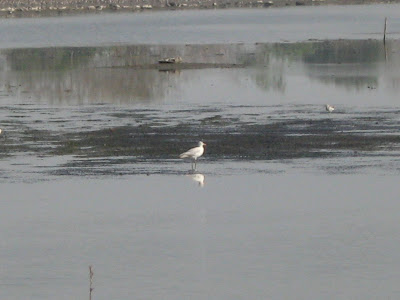 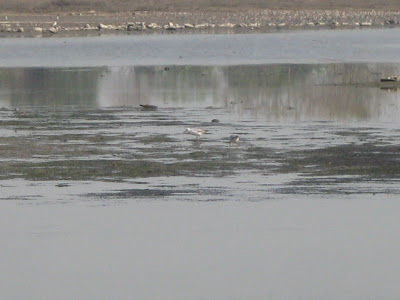 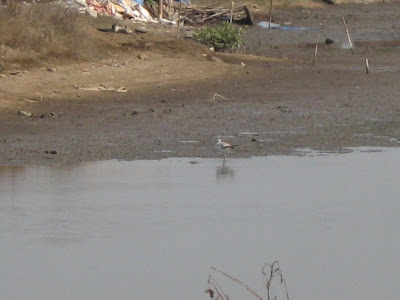 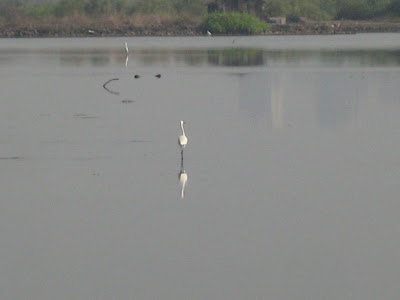 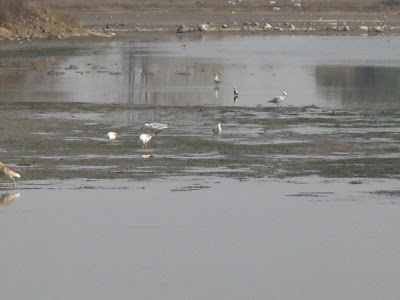 This wasn’t one of our most satisfactory birding trips, but it makes me want more, and both of us are looking forward to next year when the birds will (hopefully) return again! Let’s keep our fingers crossed and hope that the open area isn’t taken over by our space hungry city by then, so that the winged migrants do find a home away from home again!
Thankfully, we were offered a lift while returning, and gratefully accepted, reaching home with no adventures at all! We were tired, but excited enough to try out the Times Summer fest at Bandra Kurla Complex. I have attended this exhibition every year, and have found some wonderful things too, but this time, it was an anti-climax to the wonderful week end that we had. The exhibition was full as usual, and did have some interesting stuff, but to my great disappointment, there were hardly any books unlike the previous years, when I found some great ones! The stalls this time were filled with clothes and eatables, neither of which interested me. We spent almost two hours there, though, and were too tired to stop by the Earth Mela while returning.
The weekend had passed by, like a blur, but it was memorable, though! Hope there are many more such hectic but wonderful weekends ahead!
Thankfully, this finishes my weekend series, though a week late! I still have lots more to write about my Binsar trip, so wait for them!