April 16, 2010
The idea of a perfect vacation is different for different people. While some like to make the most of it, doing something every minute, some like to do absolutely nothing at all. The perfect place for a vacation too, differs – while some expect homely comforts no matter where they go, some like to go with the flow and live a totally different life. As for me, I am possibly the moodiest person around, sometimes wanting a vacation filled with activities, trying to discover every single place in and around, while at times, I just want to relax with a book, and won’t stir from the armchair. My recent trip to Binsar was just that – the best of both worlds – we trekked (very very moderate treks, which tired me out, which says a lot about how fit I am!), we explored some wonderful temples, and for days, I just relaxed in an armchair in the midst of nature, listening to the sounds around me, a book in my hand! Absolutely the perfect vacation!
Before I get into details, here is a clarification – there are two places called Binsar in Uttarakhand. One is near Ranikhet, where the Binsar Mahadev temple is located, and the other near Almora, where the Binsar Bird Sanctuary is located. We spent our vacation at the Club Mahindra Binsar Valley Resort, which is about 30 Kms from Almora and about 15 Kms from the sanctuary. This place is more often called the , and if you ever go there, make sure you clarify which Binsar you want to go to!
The journey from Kathgodam to Binsar took us around 3 ½ hours. Plenty of taxis are available for hire outside Kathgodam station. If you want to go local and try out the buses, there are plenty of them too, but from the Haldwani station just before Kathgodam. In fact, Haldwani seems to be the main halt for the locals, since the train was almost emptied there…. And we were besieged by taxi drivers asking us where we wanted to go. This is not new to us, for every tourist place is filled with taxi drivers looking for passengers, but this was the first time we were approached while we were still in the train, and one stop before our destination!
We had already made arrangements for a vehicle, thanks to a fellow traveller on IndiaMike.com, who gave us the phone number of a driver he had hired. This turned out to be a blessing, since we could escape the clutches of the other drivers, and even saved some money in the process. You can contact the driver, Anil Bisht at 9719276921.
The journey took us through a really picturesque route, and the scenery did much to alleviate the nausea I usually feel while driving on mountains. Leaving Kathgodam behind, we passed via Bhimtal, a location I had just recently heard about from Mridula’s travelogue, and it was a really beautiful place, which made me feel like stopping over. However, that was out of the question, so we made a mental note to return sometime and drove on.
For most of the journey, the river Kosi was by our side, and I could scarcely believe that the river which overflows and causes havoc every year was in such a pitiable state – there was hardly any water to speak of, the river bed was visible at most places, and you could easily walk across even at those places where there was a little water! The huge rocks and boulders on the river bed made it clear that this was a dangerous river when it was full of water from the melting glaciers! Apparently, the situation is the same every year – rains have reduced and the rivers dry up after the winter. In summer, the snow melts and the rivers fill with water and overflow, flooding the villages and destroying the crops. No one seems bothered and the separation from the state of UP and its new name have done nothing for the locals!
On the positive side, the lack of water did not seem to make the place seem dry and lifeless. On the contrary, even in the searing heat of the early summer, the route was green and beautiful, and as we approached the mountains, it just grew better! 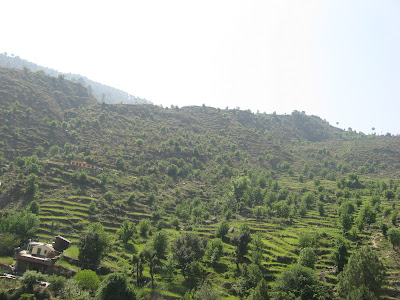 Binsar was not our first choice for the vacation this year. We were clear that we wanted to go north, but the destination took a lot of discussion. What settled the matter was the fact that the Club Mahindra resort at Binsar offered us the option of staying in a log hut! This was too good an offer to turn down, and I went ahead and made the booking.
Imagine my surprise when we arrived at the resort and were asked by the manager if we would prefer to accept rooms in the main part of the resort, since we were accompanied by a kid. Their logic was that Samhith would probably prefer being in the main part of the resort, since that was where all the activities were held. The log huts were a bit farther away, and it wouldn’t be possible to participate in all of them. My immediate reaction was to refuse, but Shankar accepted, saying that we would give it a try. Thus, we ended up in the main resort, which, to be honest, was really good. Samhith and Shankar enjoyed playing games in the activity room, while I caught up with my sleep! 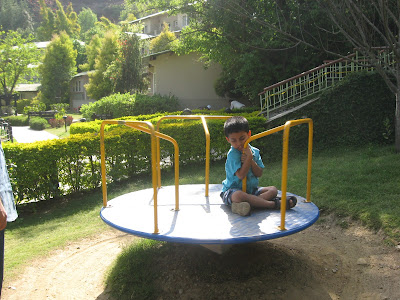 Morning brought along with it plenty of birds, which sort of appeased me, but then the vehicles started plying on the road which passed just outside the resort, and I went back to try and get back the room I had been promised. Finally, by late afternoon we succeeded, and shifted to the Manipur Villa log hut.
The Manipur villa is located at a higher level than the main resort, and there is a small path to climb up the hill. There is also a narrow road for vehicles, and only the resort vehicles are allowed on the road. These vehicles travel up and down all day long, ferrying guests to and from the two parts of the resort.
If the main part of the resort was comfortable, the Manipur Villa was breathtaking! Samhith couldn’t believe that our cottage was really built of wood, and he kept touching the walls to make sure! By the time we settled into our room, it was evening, and when we opened the balcony door, we were greeted by a strong gust of wind which threatened to blow us away! I fell in love with the place at that moment!
As for Samhith, he was a bit upset at being pulled away from the interesting activities, but was happy that there was at least a TV for him to see his favourite programs. As for Shankar, he too was happy that he wouldn’t miss the IPL! Try as I might, it is impossible to divert these guys from the TV! And to be honest, I must also add that Shankar complains that he cannot get me away from my books either! Each to his/her own!
Well, this post has gone on long enough for me to stop here. As of now, I have covered just a small portion of the trip. There’s lots more coming up, so wait and watch!