October 09, 2010
The most interesting thing for me during Navaratri are the Golus. This is one festival which allows me to unleash my creativity, which makes it that much more special to me! Not that I have been keeping Golus for so long..... I don't remember the celebrations when I was a kid and we lived in Delhi, but since we came to Bombay, we were unable to keep the Golu, though I grew up hearing about all the kinds of things my uncles made. My maternal uncles, especially the oldest one, is a whiz at making up wonderful stuff from just about anything (though my cousins wouldn't agree, probably because he doesn't do it anymore!). Hearing all the wonderful things they did always made me eager to try things out, but I was able to get a chance only when I got married. Since then, every year, I have tried to make things interesting, and think I have succeeded so far. I have more ideas for the years to come, and just hope I will be able to continue.....
Meanwhile, at my mom's place too, the Golu has started again, and every year, my mother and aunt think up wonderful stuff and try to recreate the kind of displays they used to make as children...... Last year they had a indoor and outdoor sports themed Golu , and the year before, they had their huge collection of dolls all over the house! This year also, they have some wonderful displays... Here are some pics.....
This is the main part of the Golu - the steps 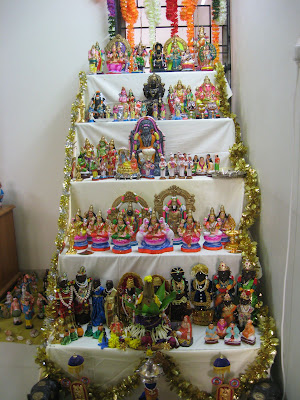 On one side is an arrangement of dolls... all of them performing folk arts.... there are dancers and drummers, even the traditional marriage nadaswaram players. 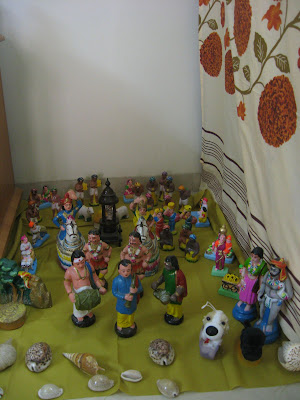 On the table are assorted dolls and toys representing the things used at home... from washing machines and fridges to vessels, grains, ....the list goes on and on..... 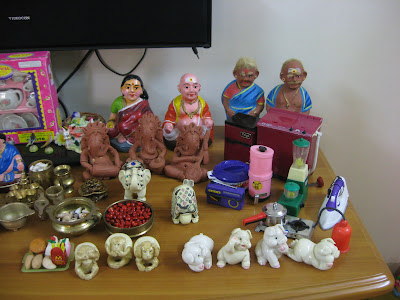 This is a continuation of the same thing..... See those dolls.. Beautiful, aren't they? 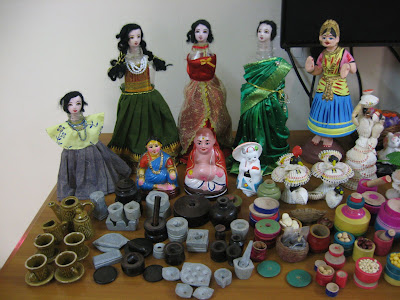 Take a closer look.... Do you know what they are made of? Old, discarded, plastic bottles of liquid soap!! Amazing, aren't they? The faces are available in the market, but they have been painted by my aunt and the hair has been stuck on! See how creative they are! 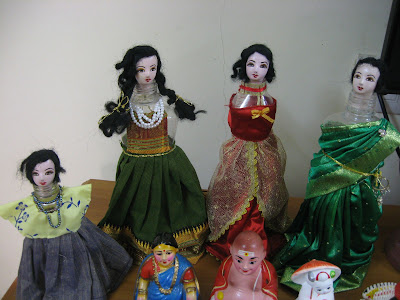 Moving on to the next exhibit - this is  a representation of the first avatar of Lord Vishnu - Matsya Avatar. The fish is a stuffed toy and the boat is made of clay...Both have been made by my aunt and the boat is filled with seeds collected over the last few months by my mom... and tiny plastic animals collected by my aunt when she was a kid... Apparently they used to get such stuff with Binaca Toothpaste! They are far cuter than the McDonald toys or the Kinder Joys we get these days! 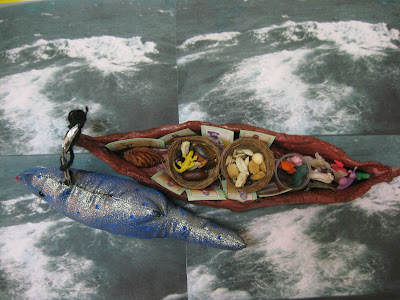 For those of you who want to know more about it, here is a write up conveniently provided.... 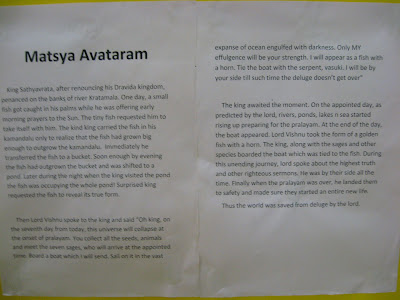 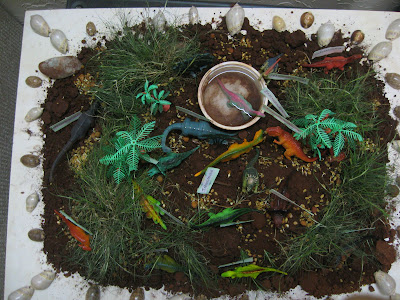 Here are a few more sets.... This one depicts the story of Manu Needhi Chozhan, a king renowned for his fairness. To read his story, see my earlier blog about my mom's Golu. 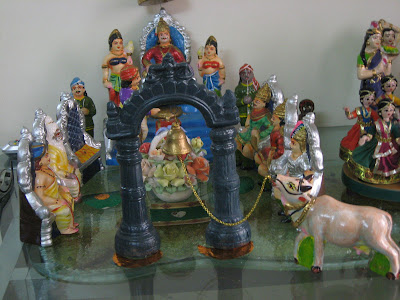 And finally, here is the section devoted to Krishna..... Samhith's favourite toys in the house! 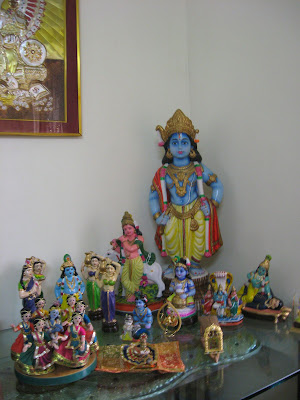 Before I end this post, here is one final decoration.... the lamps have been collected over the years, and the crochet doily has been made by my aunt. Patty, I guess you will like this! I remembered you when I saw those flowers in the centre! 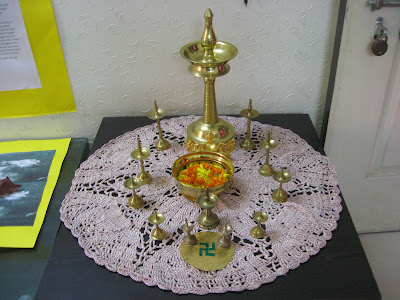