October 18, 2010
In my last post, Navatatri 2010 - Day 10 - Part1, I spoke about Vijayadasami, the conclusion of Navaratri. However, there's another aspect of the same day too, which is why this post is in two parts.
While Navaratri is a festival dedicated to the goddess, it is also associated with Lord Rama and his defeat of Ravana. All over the north, this event is celebrated on a grand scale as Ram Leela - the acts of Rama. Over nine days and nights, actors enact the roles of Rama, Lakshmana, Sita and Ravana, among the many characters of the Ramayana, living their parts as they play it. The tenth day or Dusshera is when this epic concludes with Lord Rama aiming an arrow at Ravana's heart, and an effigy of the dreaded asura goes up in flames.
I last attended Ram Leela as a kid when I was in Delhi, about Samhith's age, and don't remember much about it. The urge to see it again was great, but it didn't look possible, until this year, when I learnt that there was one being conducted quite near my house, albeit on a smaller scale than the more famous ones! Who cares about such insignificant matters anyway, if I could get to see one after ages! So off we went, Samhith and me.... his first Ram Leela, and mine, the first after ages!
Here are a few images....

The stage with the characters playing Rama, Lakshmana and Vibheeshana on the left and Ravana on the right. 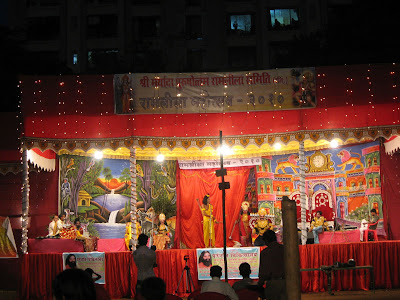 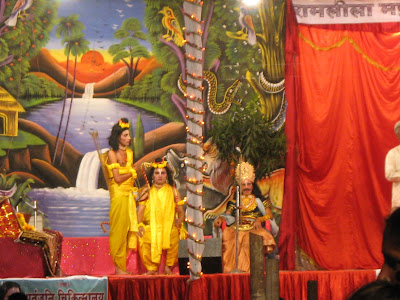 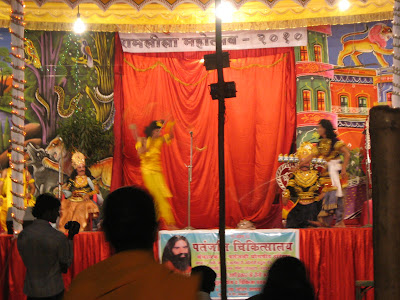 and here is Ravana's effigy - the one which will soon go up in flames.... 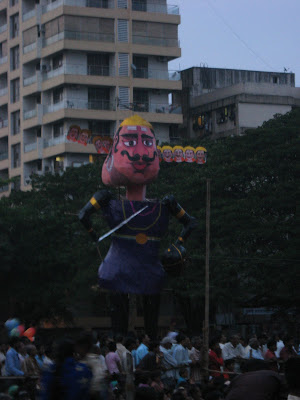 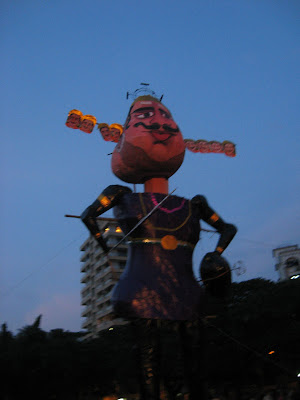 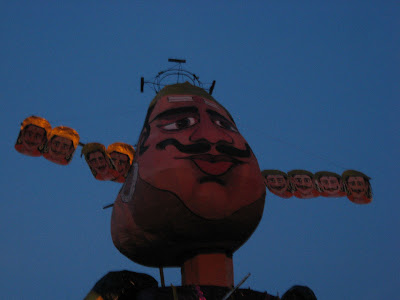 Samhith enjoyed it a lot, which was quite a surprise, considering that he couldn't understand a word of the dialogues or the songs! Guess he just loved them sparring with weapons! Thats the main draw for the kids anyway, and the place was full of stalls selling swords and bow and arrows! I had a hard time steering Samhith clear of all that, and settled to buy him a flute and a horned head band instead!! Talk about compromises!
As it happened, we couldn't see Ravan go up in flames after all! The VIP who was expected to come and set off the arrow to kill Ravan was late, that too by more than an hour! The actors managed to keep up the tempo by indulging in extended war games, and entertaining the audience, and it was really fun, but unfortunately, I did not have an hour to simply lounge around while the VIP arrived, made his speeches and managed to get the arrow off. So, we decided to go back home. As Samhith mentioned, in a very grown up way, "At least we know that there is a Ram Leela here now, so we can come back again next year!"