October 27, 2010
This one is a permanent resident of our colony, and can be relied on to appear every now and then, reminding us of his presence, especially as a warning to kids not to venture into the bushes! Capturing him on camera has never been easy, even though he comes out to bask in the sun,  because he seems to be more wary of the kids than they are of him, and he is the first to disappear when they mark their arrival with whoops and shouts.
I saw the chap this week as I left to collect Samhith from school, and he didn't seem to be bothered much by me, and continued to absorb the warm sun rays after a sudden spate of rainfall. 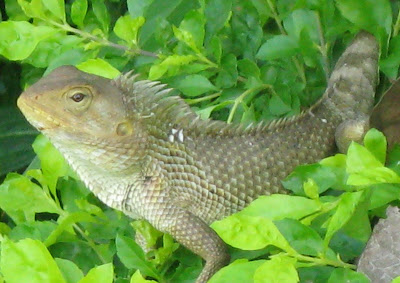 As I clicked on and on, happy that I had my camera with me for once, he turned to regard me, as if wondering what I was doing! 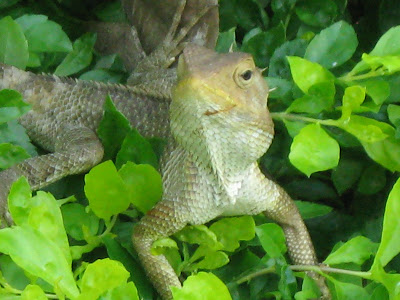 Incidentally, for those of you who are interested, this one is an Indian (or Oriental) Garden Lizard, also called a Changeable Lizard. It is NOT a chameleon, though it does change its colours, but much more slowly.