September 26, 2013
I stood behind a small shrine, atop a hillock. Ahead of me, as far as I could see, was the sea. Below, the waves lapped at the rocks, sending a stray spray up to where I stood. On one side, I could see the rows of palms which designated the end of the beach. Beyond were rooftops, the only evidence of the town. Somewhere amidst those roofs was an ancient temple, the one I had come to visit. For once, it wasn’t just the temple, but the beaches which beckoned. For, I was at Gokarna, a town known just as much for its holy temple as its magnificent beaches. 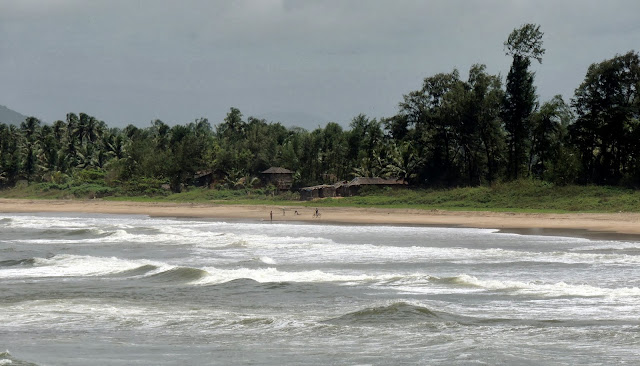 Gokarna was nothing like I had imagined it to be. On an earlier trip, we had visited the temple and the main beach, but seen little else. Imagine my surprise then, when we left the highway and turned into a narrow lane, which led us through a thickly wooded forest, twisting and turning over the hills which surrounded the small town. Our sputtering auto surprised peacocks out of their peaceful paths, and we were entranced by the sight of them flying for cover. We rounded a curve, and one of the many beaches came into view. This one, we were told, was Kudle Beach.

The beach’s name comes from the word ‘small’ in Kannada. And it was small indeed, compared to other beaches I had seen, even in this region. The hills were obviously responsible, since they divided the long coast into small nooks – hidden beaches, which, even today, had to be approached by foot!

A little further was the beach we were headed to – among the most popular in the area, one which draws people from far and wide – Om beach. Here again, the hills hid the beach till we were almost right above it. Walking from the auto stand, where our driver dropped us, we could see why the beach was so named….

Of course, we were watching from the wrong side! The hills on the opposite end would show the ‘Om’ symbol perfectly, but it wasn’t difficult to imagine from where we stood.

Three beaches may seem enough for a town as small as Gokarna, but these aren’t the only ones! There are two more beaches, further beyond the hills, unapproachable during the monsoons, except for those willing to trek. Needless to add, we didn’t even try! Three such beautiful beaches was enough to keep us busy!

This was originally published on the Club Mahindra Blog. You can read the article here.