A Halloween Walk with the Travel-Loggers

October 30, 2013
Walking down from Sewri Railway station, we were met with blank stares when we asked for directions to the Christian Cemetery. It was only when we asked for ‘Church ka bada Kabrastan’, that a few people nodded and showed us the way. If they were surprised that a woman and a child were asking directions to the cemetery late in the evening, they didn’t show it! Anyways, what were we doing, going to a cemetery so late? We were heading there to meet our fellow Travel-loggers and set out on a Halloween themed walk, starting at the cemetery. 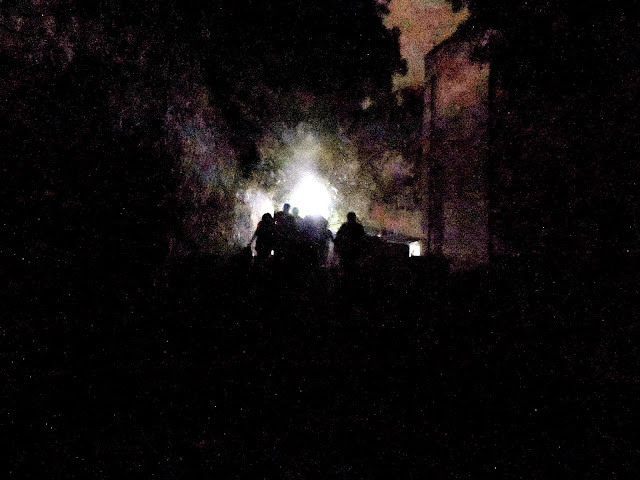 “Would we go inside the cemetery?” was the only question Samhith had, but I had my doubts. Waiting at the cemetery gates for the others to show up (yes, we reached early, as usual), people passing by glanced at us, probably wondering what we were doing there, but thankfully, the Mumbai attitude of minding their own business prevailed, and they kept their thoughts to themselves. The others soon turned up, and thus began an interesting one and a half hours of conversation regarding death, spirits, rituals and beliefs from various cultures.

The talk began with the origins of the word, ‘Halloween’. The roots of the celebration go far, far back, to the Celtic harvest festivals, to a time when the onset of winter was heralded by preparing for the long nights, of remembering and appeasing spirits, since winters were difficult to get through. With the arrival of Christianity, celebrations and names changed, though the dates remained much the same. The Gaelic Samhain was replaced by All Saints Day, and All Souls Day, both of which later gave way to Hallows Eve, which eventually became ‘Halloween’. Thus do pagan rituals and feasts live on, albeit under a different guise. Perfectly apt for Halloween, don’t you think?

Our crowd brought out the night watchman of the cemetery who had us enthralled with his stories of hearing strange sounds in the night, of the cart wheels moving by themselves, and someone calling out to him, by name, over and over again. While Samhith hung on to his every word, probably trying to remember so he could tell his friends, I wondered what it was like for the men who worked there, day after day. Living in the midst of death, what would their life be like?

We tried our best to convince him to let us enter, but he was a conscientious man, and refused. So then, we moved on, to our other destination – the Sewri Fort. 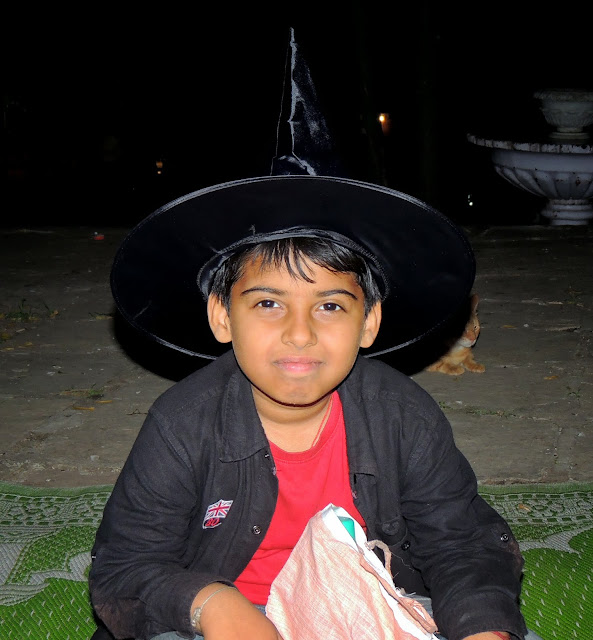 Even in the daytime, the fort can be a lonely place, with all the warehouses and trucks around, and not a soul to be seen, apart from those in the dargah nearby. In the night, with few streetlights, you can imagine what it would be like. The first pic in this post was clicked here, while we were climbing the steps to the fort.
As it turned out, the fort was occupied by squatters, so we simply stood at the entrance, the sharp contrast between the darkness of the fort and the bright light of the dargah simply enhancing the lateness of the hour.

While I have been to the fort before, I had never entered the dargah, so it was a surprise. Rebuilt completely about 15-20 years ago, the dargah is a new one, and is there no remnant or reminder of the original structure which stood here for centuries. The present structure is a simple one, built like any other mosque or dargah, with nothing to make it stand apart. The fact that it is the resting place of not just one saint but two – Jalal Shah and Murad Shah, who were brothers, makes it interesting, but like most interesting things in this busy city, little is known about them, or their dargah.

I knew that the fort has a wonderful view of the sea, and should have expected the dargah to have the same, but even then, I was surprised. Sitting there, on the open terrace, with the sea breeze blowing, we continued our talk of Halloween. To add to the fun, were witch hats and bat bracelets, not to mention candies! I have no idea if Samhith followed our conversation of spirits in different cultures, but he enjoyed the treats and listened as avidly as he could, sleepy as he was! A few cats added to the atmosphere, purring, begging for treats, jumping between us at least expected moments. Uninvited they might have been, but they were the perfect guests to our Halloween party.

Time passes by quickly, when in the company of like-minded people, and so it did, this time too. Everyone joined the discussion, with rituals and practices related to death in their own cultures, and what was most apparent was how similar these rituals were, even though they appeared to be so diverse. 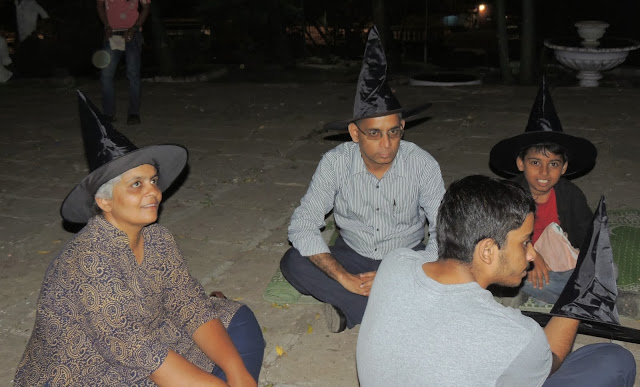 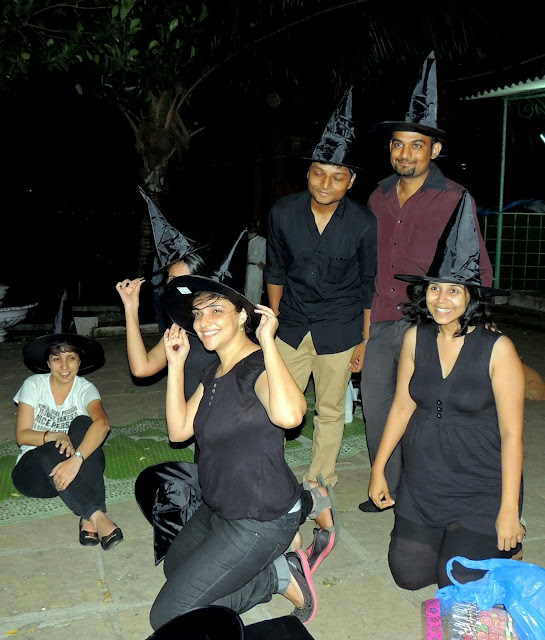 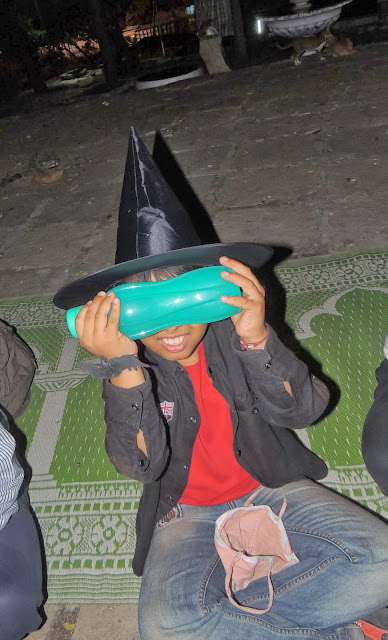 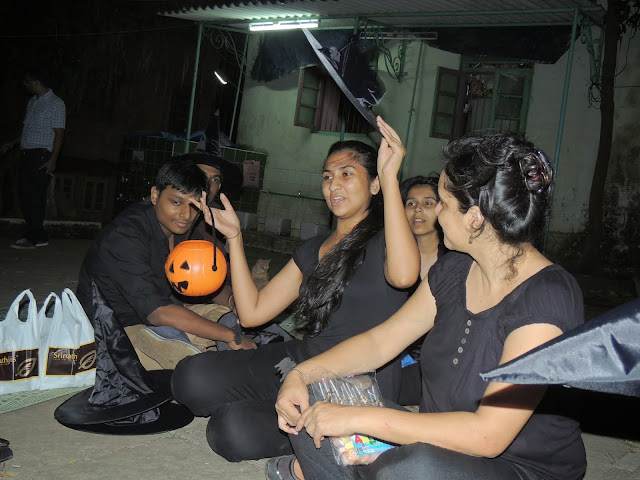 We next went into an old, decrepit, abandoned building right next door, belonging to the Customs Department, trying to imagine how long it had been abandoned, and why. Were there ghosts around? It was surely a creepy place, in a terrible condition, whether due to time, or vandals, we can’t be sure, but if it wasn’t for the number of people around, it would have been a scary experience. As it was, all we could do was explore the ground level, staying clear of the first floor, trying to navigate our way around, without stumbling on an overgrown creeper, or a broken piece of tile. 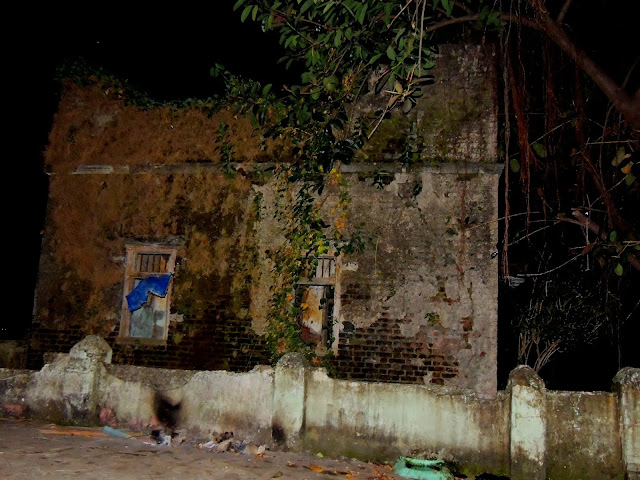 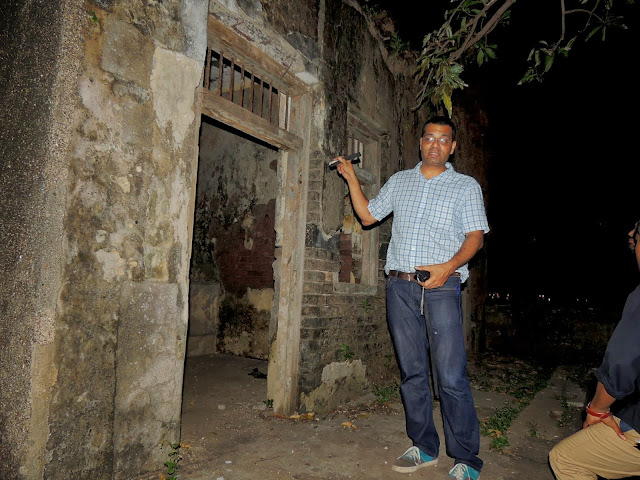 It was difficult to believe that we had spent almost an hour in the dargah, but time waits for none, and the people at the dargah were waiting for us to leave, so they could leave too. Waiting beyond the time limit might have added to the spooky thrill, but obviously those in the dargah wanted to take no chances, though they all assured us there were no spirits around. “Baba takes care of his own” was their only refrain.

And it was on that note, that we left, and headed our separate ways, full of thoughts of superstition and rituals, all arising from the mystery surrounding death and the afterlife.

Note: The walk was an enjoyable one, and I enjoyed the conversations more than the places themselves, especially since I had been there before. This is not the only such spooky place in Mumbai. There are many such abandoned places around, all of which can ensure a suitably spooky atmosphere. However, it is not advisable to explore any of these places alone, even in the day, no matter how high the spooky or the thrill quotient. Go ahead and explore, but go with a group, and above all, stay safe!