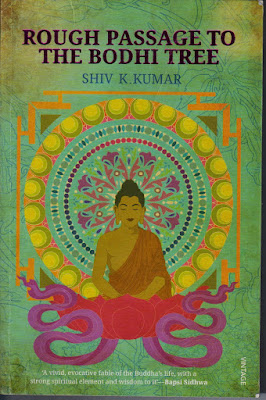 The story of the Buddha normally begins with the story of his birth… sometimes even before, with the omens which heralded the birth of a great soul. Shiv K. Kumar, however begins his story of the Buddha with Siddhartha choosing to participate in an open competition to win the hand of the princess Yashodhara. In doing so, he makes it quite clear that he wants us to see Siddhartha, not just as  someone destined for greatness, to forget for a moment that we already know of his journey to enlightenment, and see him as a human, confused by what he sees around him, yet not hesitating to do what he thinks is right.

The first few chapters beautifully set the scene, showing us Siddhartha as the author wants us to see him. I especially liked the way the author has moulded the character of Yashodhara, as a strong woman, completely in love with Siddhartha, desperate to hold on to him, almost as if she knows that she cannot hold him for long.

Of course, the crux of the book is Siddhartha’s journey to enlightenment, the transformation from Prince Siddhartha to The Buddha. The book thus takes the well-known path, of Siddhartha’s journey along the various kingdoms, searching for his Guru, eventually finding his way to Gaya, being tempted and troubled by the demons of his past, his strength of will and ardent desire to know the truth and the path to peace, prevailing over all else. The book doesn’t stop with his enlightenment, but takes us further, to his return to his homeland, and his final journey to attain Nirvana.

There are few surprises for those who already know the story. But it is the conversations which make the book a good read. Whether it is Siddhartha’s self-questioning, or his conversations with his wife, or with the people he meets along the way, these conversations bring some life into the story. Especially well thought are the conversations between Siddhartha and Channa, the charioteer. The final conversation with Yama does feel a bit out of place, especially with its moral overtones and the Buddha suddenly seeming a lot more sentimental, but I guess a bit of both are justified to provide an adequate ending.

Overall, the book is a good read, though there is nothing to make it great.

This book was sent to me for review by Random House India.  The views expressed are my own.