October 03, 2013
Kings misusing their power is nothing new, neither in our epics, our history, or even the present. Of course, in the present, the kings are replaced by those in power, but, I digress. Getting back to my story, learning of a king committing outrageous acts is nothing new. Leaning that he killed innocent people is nothing new either, and we would scarcely lift an eyebrow. However, when the spirit of the innocent victim plagues the king, we sit up and take note! That is what makes the story of the Omkareshwara Temple in Coorg interesting.

It was Lingarajendra II, the ruler of Kodagu in the early 1800s, who killed an innocent Brahmin. The reason for the killing isn’t clear. It is mentioned on a plaque in the temple that the man opposed the king’s misdeeds. I also read in a book that the king coveted the Brahmin’s daughter. Whatever the reason, the king spilt an innocent man’s blood. However, the victim was tenacious, even after death, turning into a Brahmarakshas (spirit) and troubling the king. It was easy for Lingarajendra to kill the Brahmin, but he couldn’t cope with the supernatural, and he turned instead to more Brahmins – learned ones, who told him that the only way he could be rid of the spirit was by getting a special lingam from Kashi (Varanasi) and installing it at the spot where he had killed the Brahmin. That was something the king could do. He arranged for a lingam to be brought from Kashi and installed at the very spot. The temple was built and consecrated in 1820, and, it is said, that the spirit troubled him no more! 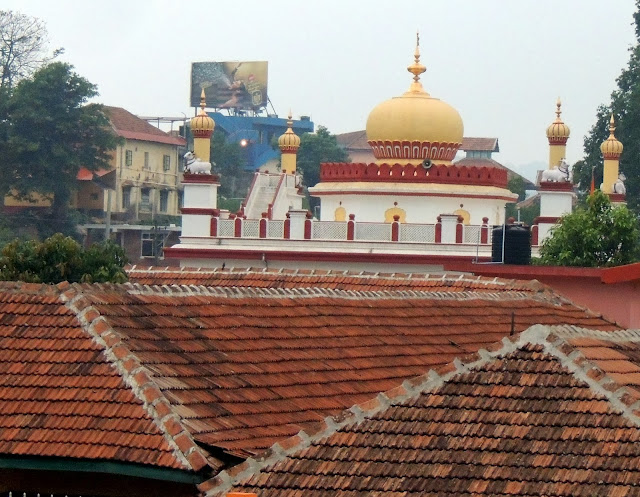 Interestingly, the temple is built in Islamic style, the dome and minarets towering over the tiled roofs of the city. Inside, the temple is simple, with the shrine holding the main lingam surrounded by one corridor. Opposite the temple is a pond, with a small shrine in the centre, connected by a causeway. There are plenty of fish in the pond, which are a huge attraction for children. 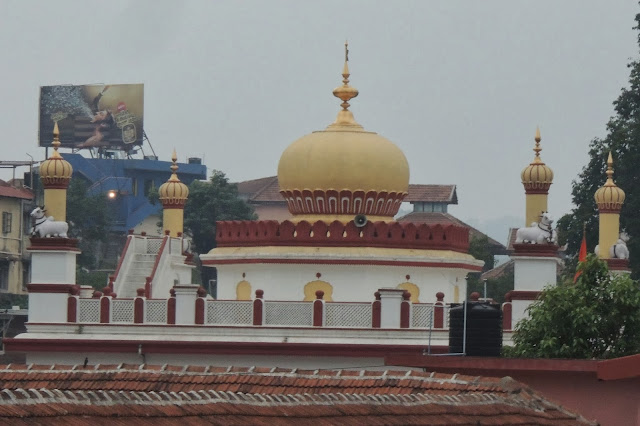 It was late evening when we visited, and a puja was just getting completed. There was all the evidence of a busy temple – bells ringing, the sound of chanting, and the hum of the crowd. It was all over in a few moments, and, by the time we went around the sanctum once, we found that we were the only ones there. At once, it seemed we were in a different time and place – there was calm, peaceful, utter silence. 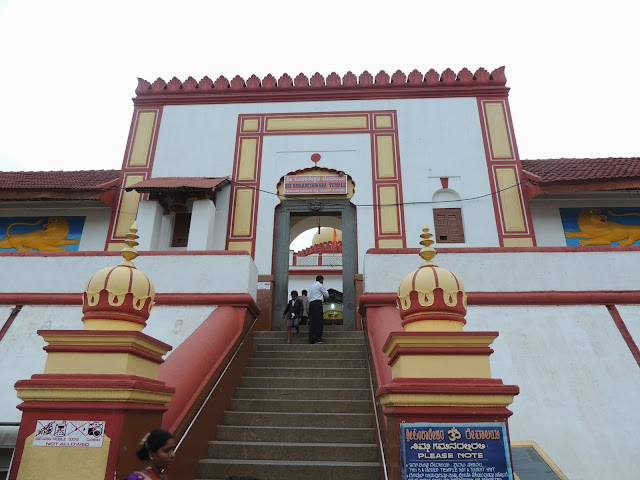 Standing there in front of the lingam, I wondered about journeys – my own journey, from Mumbai to Coorg, to see Him, He who had once made the journey from Kashi to Kodagu. My journeys bring me peace and happiness, but His journey had brought peace to someone else. Now, whether he deserved it, is another matter entirely!

The temple might have brought some relief to Lingarajendra, but he didn’t live long enough to reap the benefits of the temple. He passed away soon after, and the throne passed to his son, who turned out to be even more cruel than his father. However, the dynasty had little time left in power, for, scarcely 14 years later, in 1834, the British took complete control over Kodagu.

Misdeeds are never forgiven or forgotten, are they? Can they be atoned by building temples or performing sacrifices? What do you think?