On the Kali River at Dandeli

January 10, 2014
The Kali River is the lifeline of Dandeli. It flows through the town, not just providing water for all its needs, but is also a haven for the flora and fauna of the area. Rapid urbanization once threatened the river, and all its inhabitants, but the efforts to preserve it seem to be working, if the lush greenery and abundance of birds around are any indication. 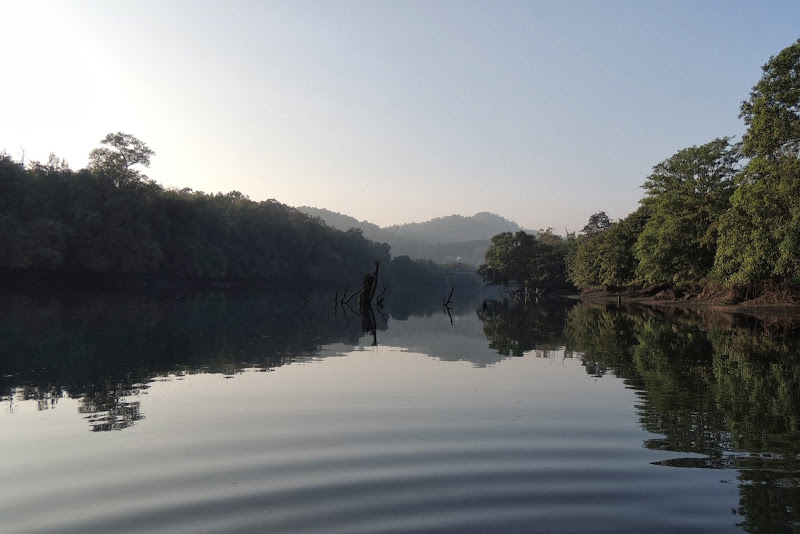 The river has also turned out to be the biggest draw for visitors, in search of excitement and adventure, for this is where they head to, for all sorts of adventure sports – from kayaking to rafting. During our recent Dandeli trip, we began and ended our tour at the river, which, looking back, seems rather apt, considering the important role it plays here. 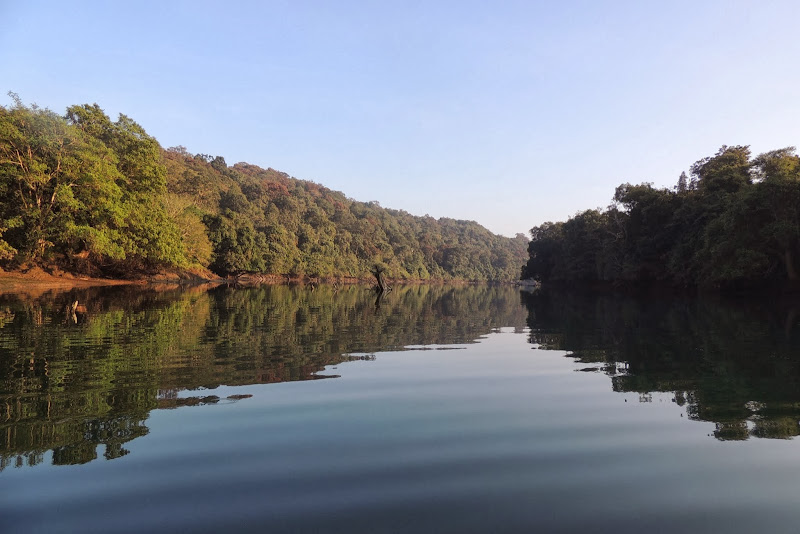 We started off with a kayaking session at the Bison Resort. This was Samhith’s first attempt at solo kayaking, and, much to my surprise and pleasure, he not only managed well, but enjoyed the experience to the hilt! He came back from the jaunt, completely soaked and muddy (having fallen into the water while getting off), but exhilarated, and looking forward to more such experiences! 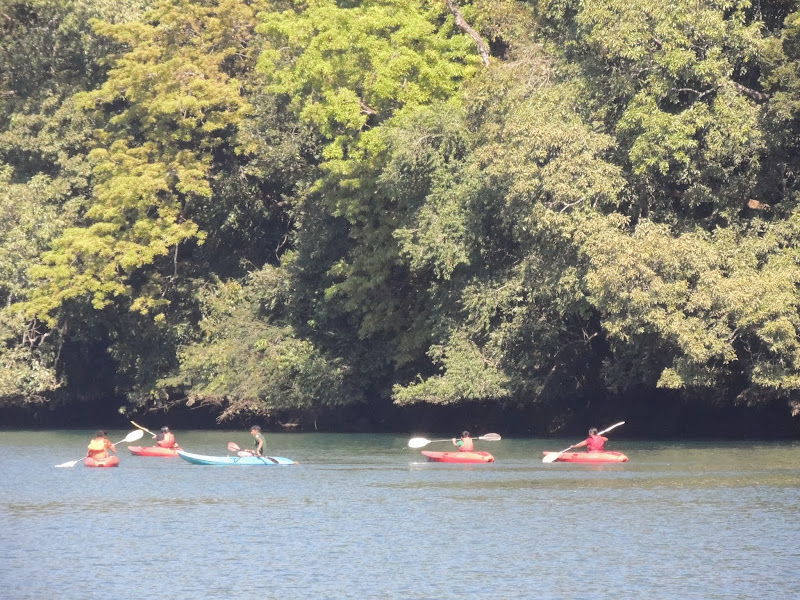 This was also where we saw our first hornbills of the trip, my attention frequently getting diverted from the kayaks..

We had originally intended to explore the river further here, going on a coracle ride, and also to what is called a ‘natural jacuzzi’ – a portion of the river where a clump of  rocks make it safe to sit and enjoy the water, and also cause the currents to give you the most natural massage possible. Unfortunately, due to circumstances beyond our control, we weren’t able to try this out. Well, like I always say, we should leave something for another time, right?

We did go on coracle rides later, twice. First, near Ganeshgudi, and later, at the Kali Adventure Camp.  At Ganeshgudi, we alighted near a bridge much patronized by birdwatchers to sight and photograph the beautiful hornbills, and descended a steep staircase to approach the river near a Shiva Temple. 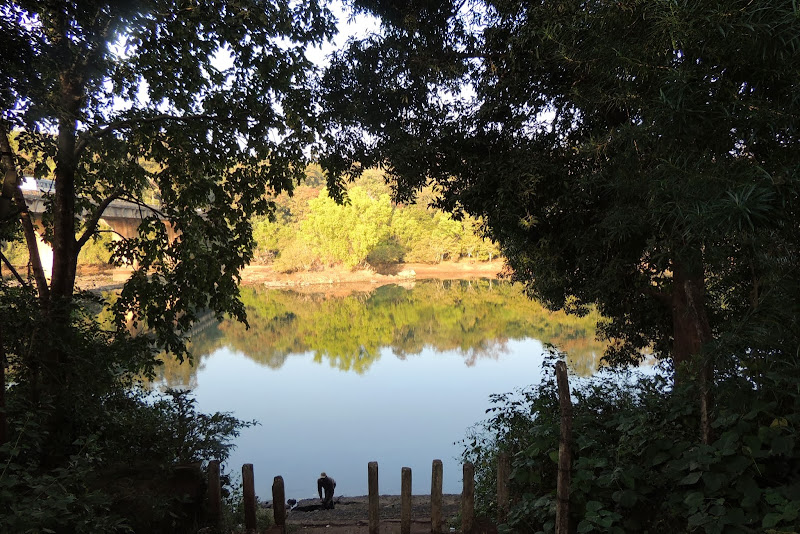 The highlight of this jaunt was the presence of a multitude of birds – from the White Breasted Kingfisher, which we see all the time, to Hornbills, which we were getting used to seeing, and the Wooly Necked Storks, which we had never seen before! 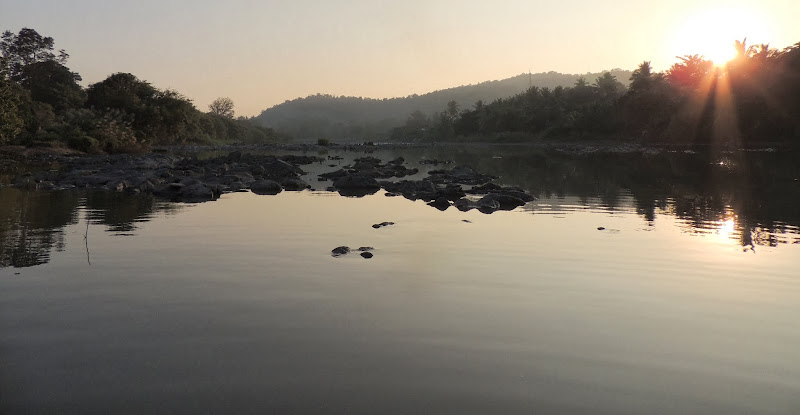 This of course, reduced the area we could explore by coracle, but, on the upside, we saw plenty of crocodiles. 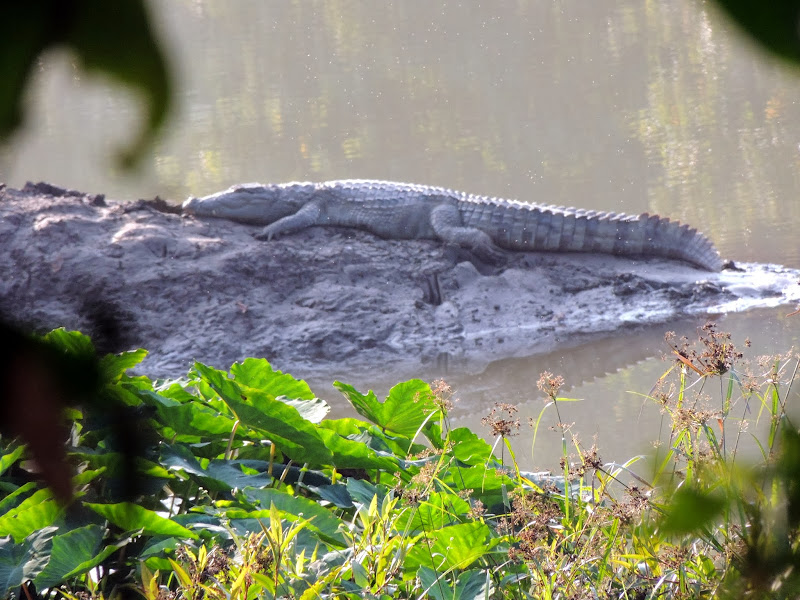 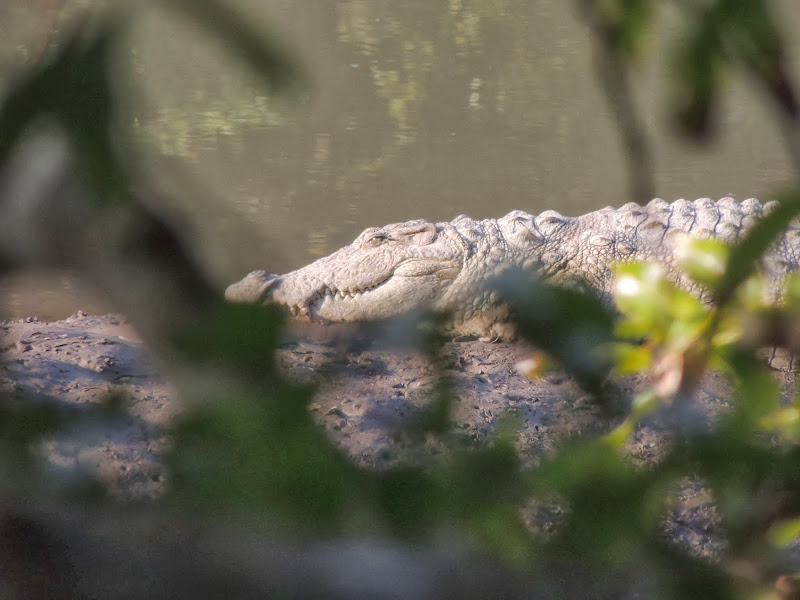 There were birds here too, especially the hornbills – the Malabar Pied Hornbills, and also the Malabar Grey Hornbills.

A flock of Yellow Footed Green Pieons roosted on a tree..

We could have stayed there forever, sitting in the coracle, watching the birds fly home, and the crocodiles slither into the water, but we had to get back home too.

Sitting at home, as I wrote this post, and wondered what to title it, my thoughts turned to a similar post, I wrote almost 3 years back – On the Kosi at Corbett. The two rivers are not similar, and neither are my experiences. However, I enjoyed that experience just as much, and  it seemed rather apt to use a similar title. Who knows, maybe this will turn into a series!

This trip was organised and arranged by Dandeli.com, a website dedicated to developing tourism in and around the area.

I am also linking this post to Skywatch Friday. For more beautiful skies from around the world, visit the Skywatch Page