November 14, 2016
The temples of Khajuraho are so magnificent, that all other monuments in the area pale in comparison. Thus, relatively newer monuments, as well as other forms of heritage, which too deserve recognition, repair and maintenance, tend to get ignored.

There are plenty of such monuments within Khajuraho itself – remnants of fortifications and palaces from the 18th century, for example, which, while not very impressive by themselves, do not deserve the state of utter neglect that they are presently subjected to. If preserved and studied, they could provide valuable insight into the importance of Khajuraho in the eyes of the local kings as well as residents of surrounding areas. Much as I would have liked to explore this part of Khajuraho’s heritage, I only had time to explore one facet which fascinated me – the Lost Gardens.

The Lost Gardens are a group of produce gardens situated around Khajuraho. They were created by the royal family of Chhatarpur in the 18th century, to supply the royal kitchens, mostly during state visits to the temples. Besides, the members of the royal family made trips to these gardens, where they camped overnight in tents, probably as a get away from the responsibilities and the rituals which would have been the highlight of their visit to Khajuraho.

There are 13 such gardens around Khajuraho, all identified and maintained by the Belgian chapter of INTACH, in collaboration with Navdanya, in an attempt to revive organic farming by using traditional methods, and to promote sustainable agricultural tourism.

I first read about the gardens on the website of the homestay I chose to stay at, in Khajuraho. Our host Vijay agreed to take us there, though he warned me not to expect much. Work was still in progress, he insisted, and we would only be able to visit one or two of the gardens in the time we had. We hesitated for a bit, but then decided to go and see what the rest of Khajuraho looked like, away from the temples, and the tourists.

As it turned out, we could only visit one of the gardens – the very first one – Pateriya ka Bagh. 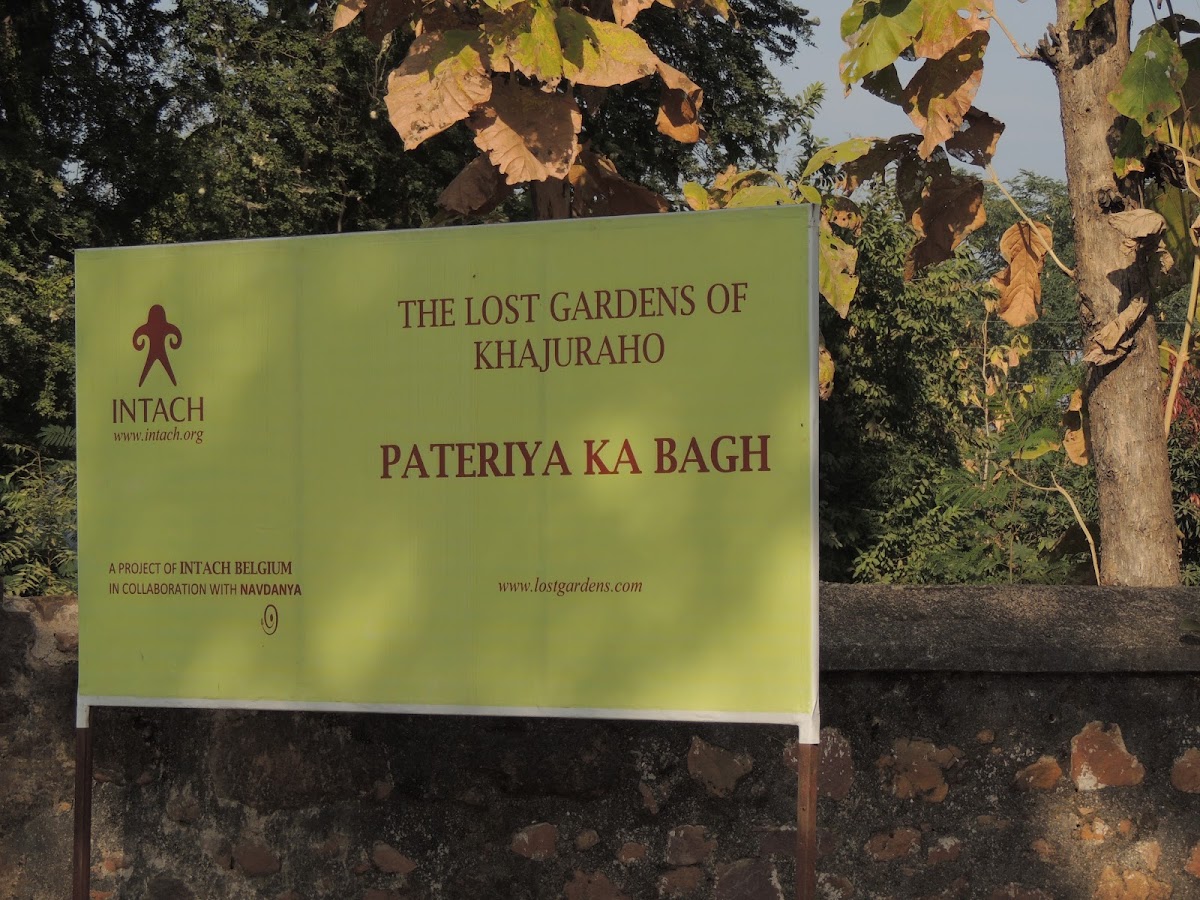 From the gate, all we could see were fields, and rows of trees. A caretaker came running, surprised to see visitors. He looked rather sceptical when I said I wanted to look around. “There is nothing much to see, but come in if you want” was all he said, as he opened the gates. 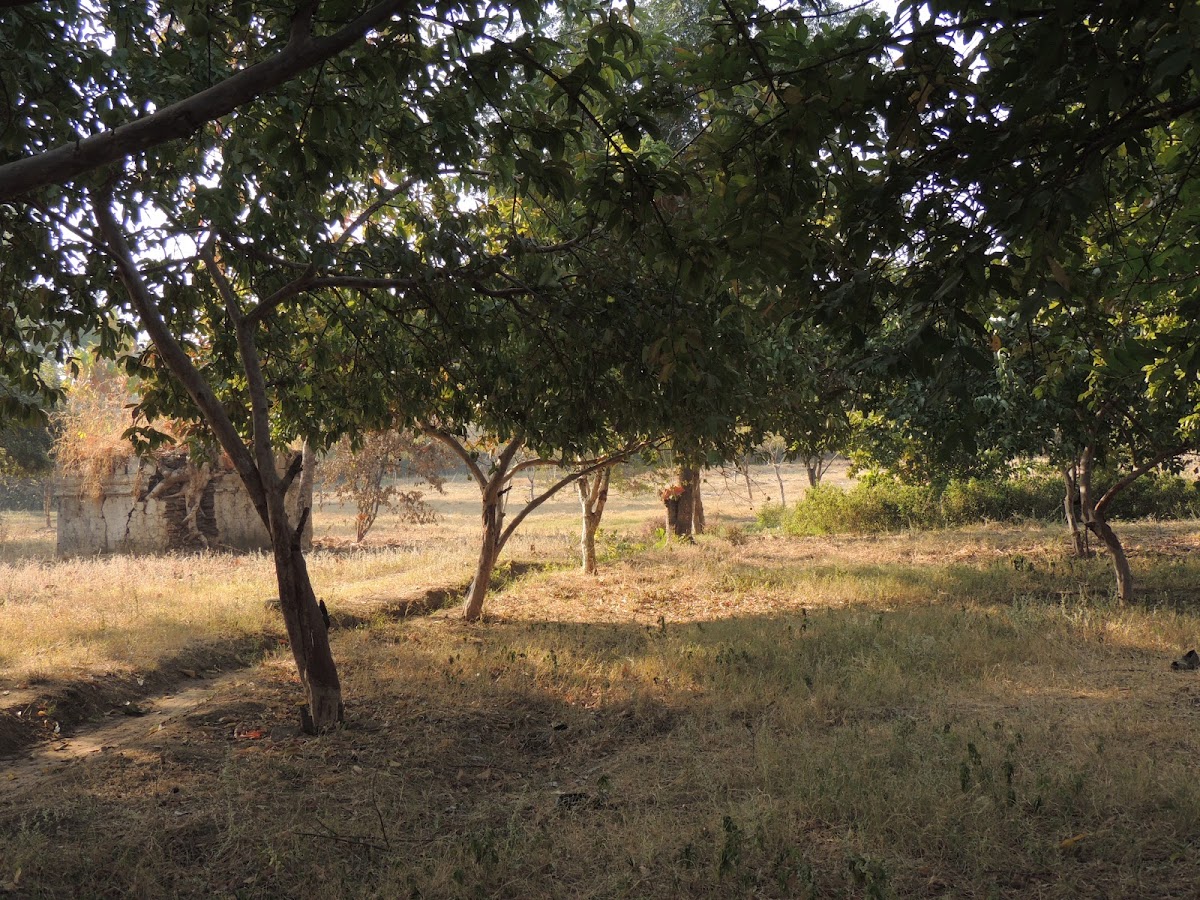 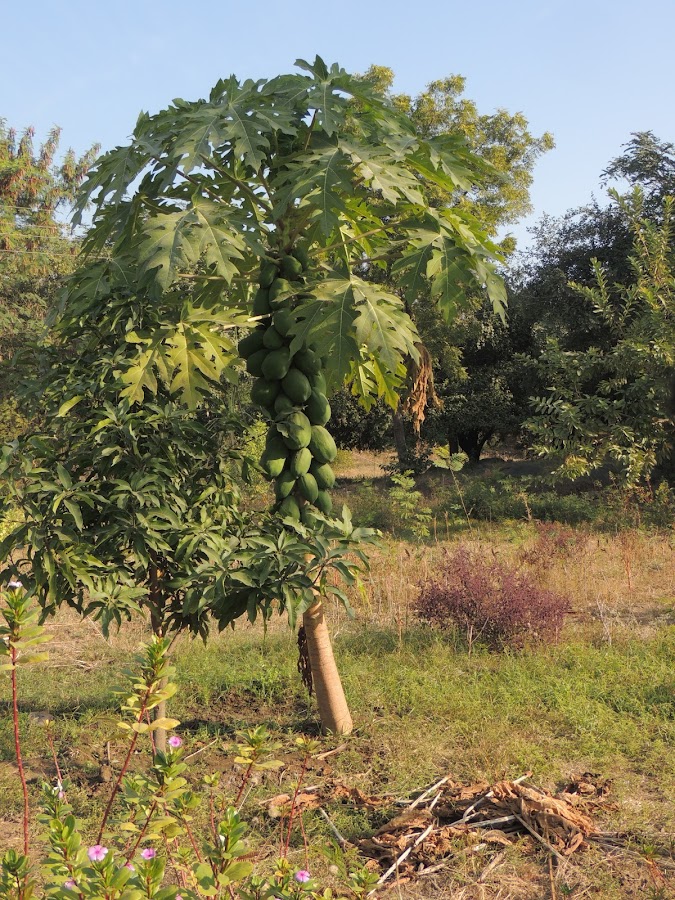 While Samhith headed towards the trees, and the poultry, I cast a glance over the fields. My knowledge of agriculture is zilch, but I recognised the lentils growing in the fields, and the chikoo, amla, papaya and guava hanging off the trees. Noticing a temple, I quickly headed towards it… 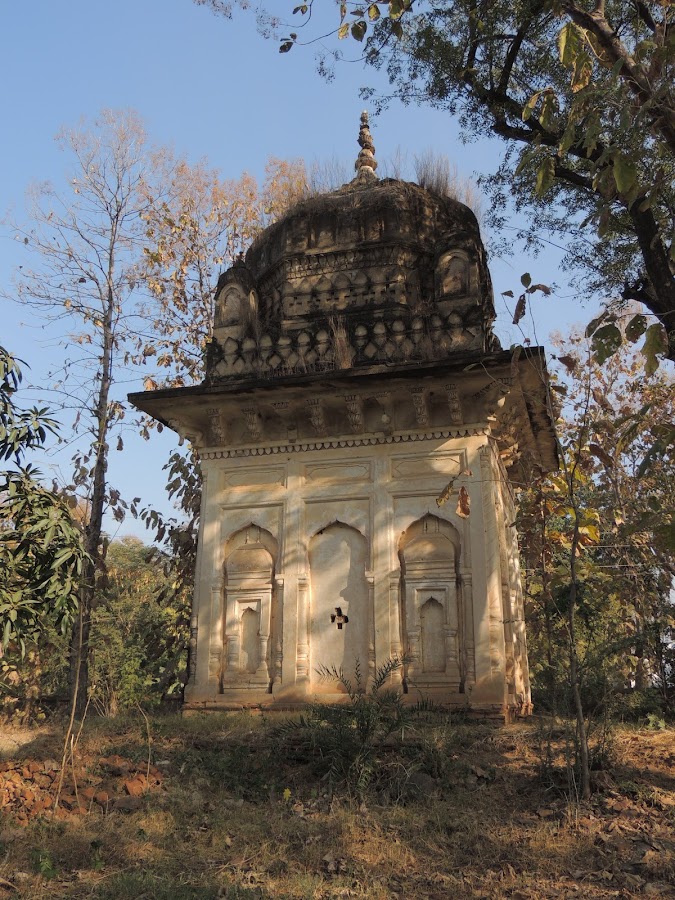 The temple might not be as impressive as those I have been talking about for the past few weeks. But it is interesting to see that the 18th century structure is typical of the period, showing a confluence of Hindu and Islamic styles, similar to a temple of the same period seen within the Western Group.

Flanking the entrance were two huge images – of Hanuman and Bhairav. The sanctum was empty, but the caretaker said it was a Shiva temple.

The brackets holding up the roof were elaborately decorated with peacocks, and would, at the time, have been painted in bright colours. Only a trace of these colours remains today. 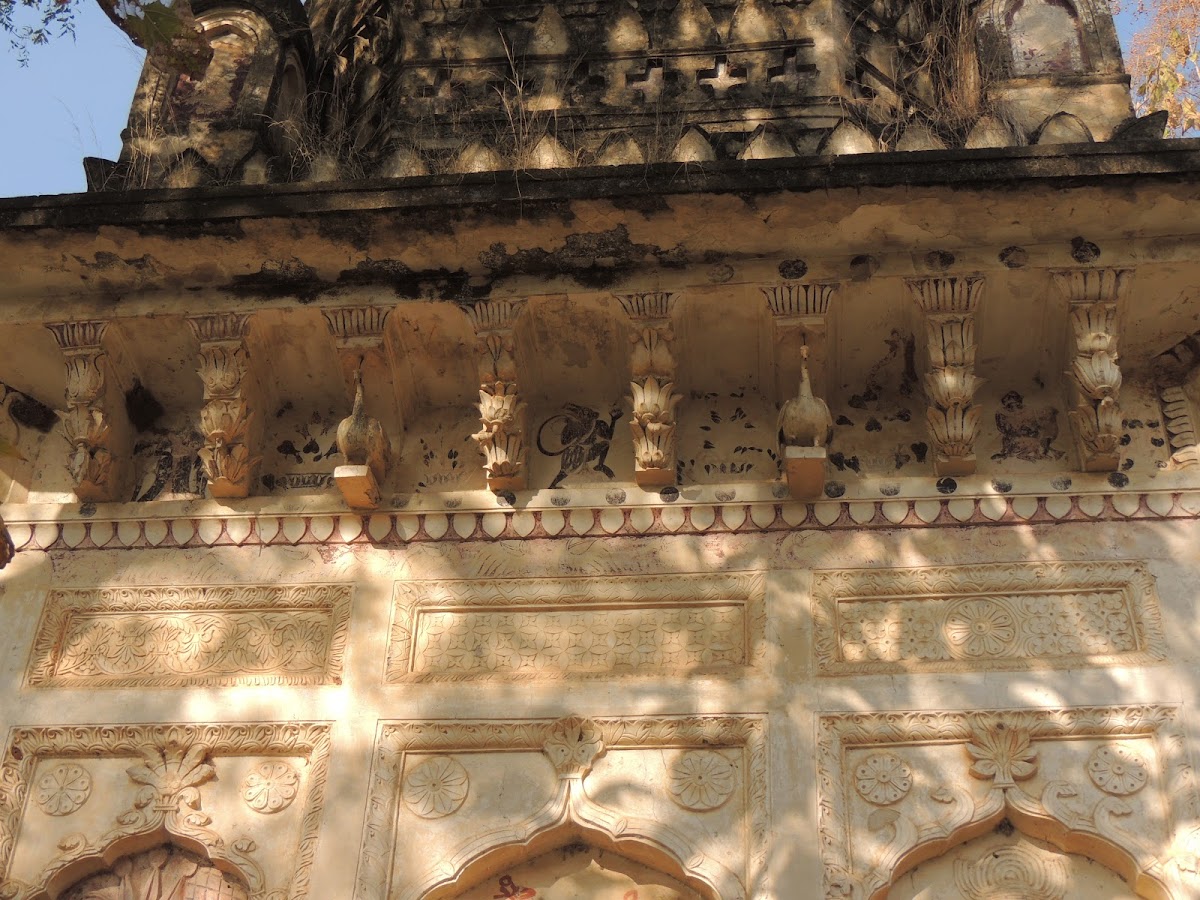 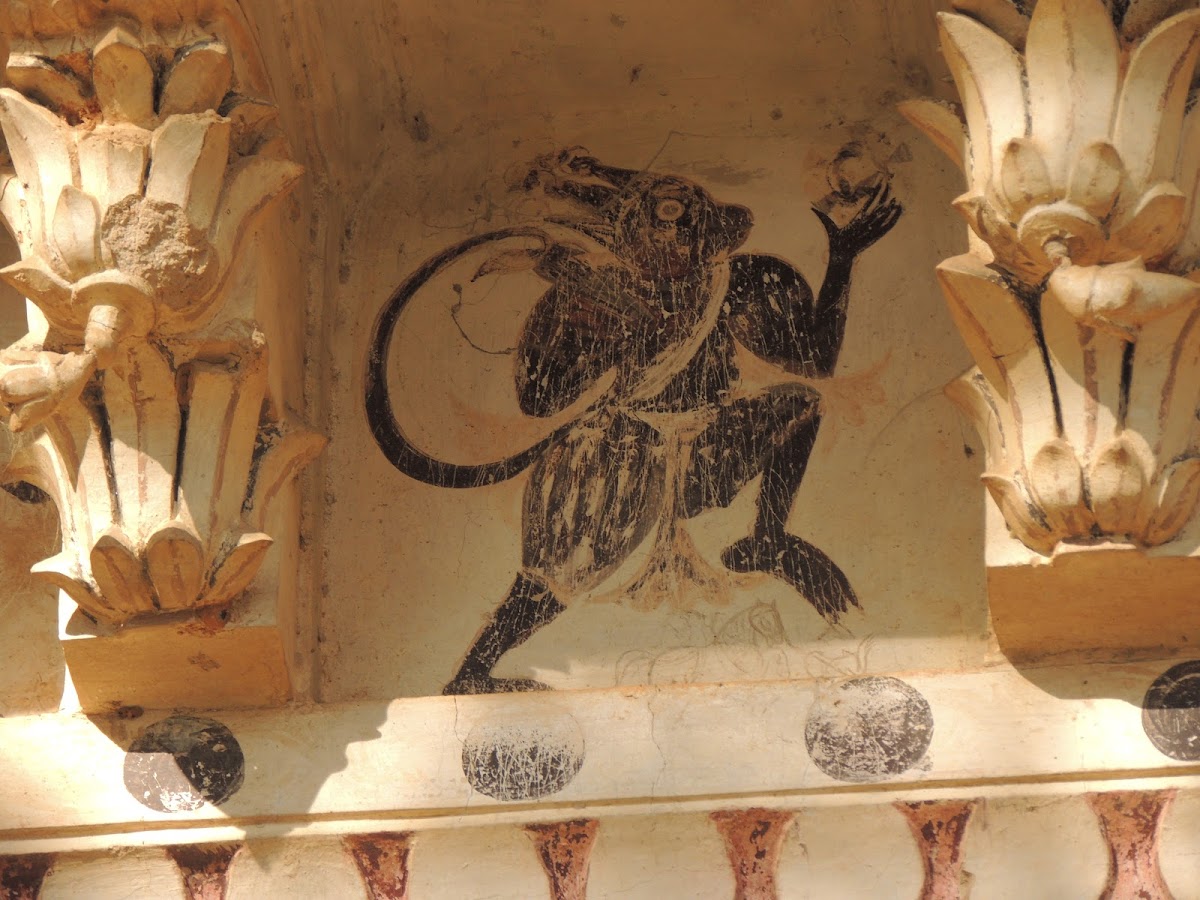 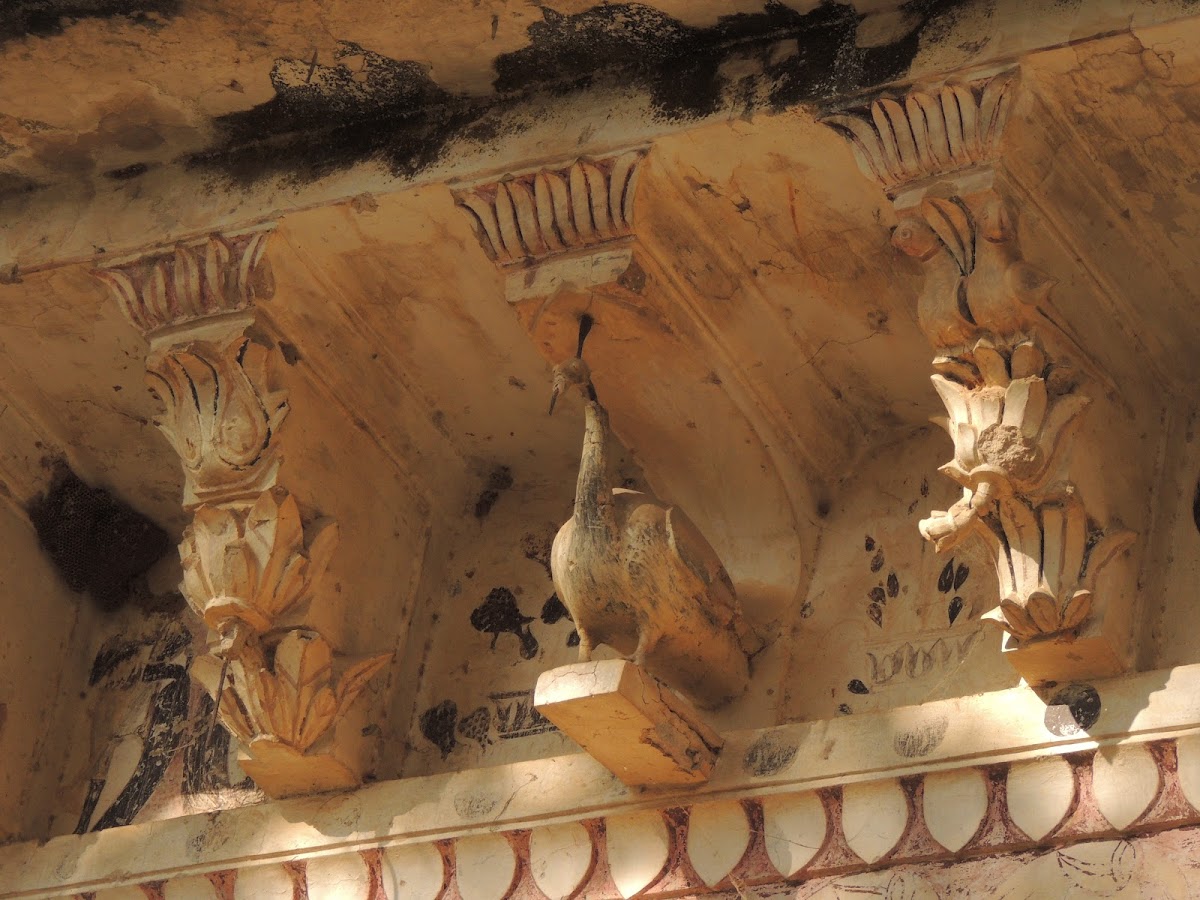 From the website of the Lost Gardens, I learnt that all the gardens had the same features – they were all about 3 to 6 acres in size, and were walled, with a Shiva temple inside, as well as Samadhis (either cremation platforms or cenotaphs), several wells, and irrigation channels. I would have ideally liked to go with the guide recommended on the website, but was unable to reach him. If you would like to explore the gardens in detail (and I would recommend you do if you have an extra day in Khajuraho), do try the number given and take a proper tour.

By the time I was done with the temple, Samhith had made friends with the caretaker, who smilingly handed out a bunch of fruits as we left. You have to simply take my word that they were the sweetest guavas we have ever eaten! It has been almost a year since then, but Samhith still remembers the graceful hospitality of the caretaker! 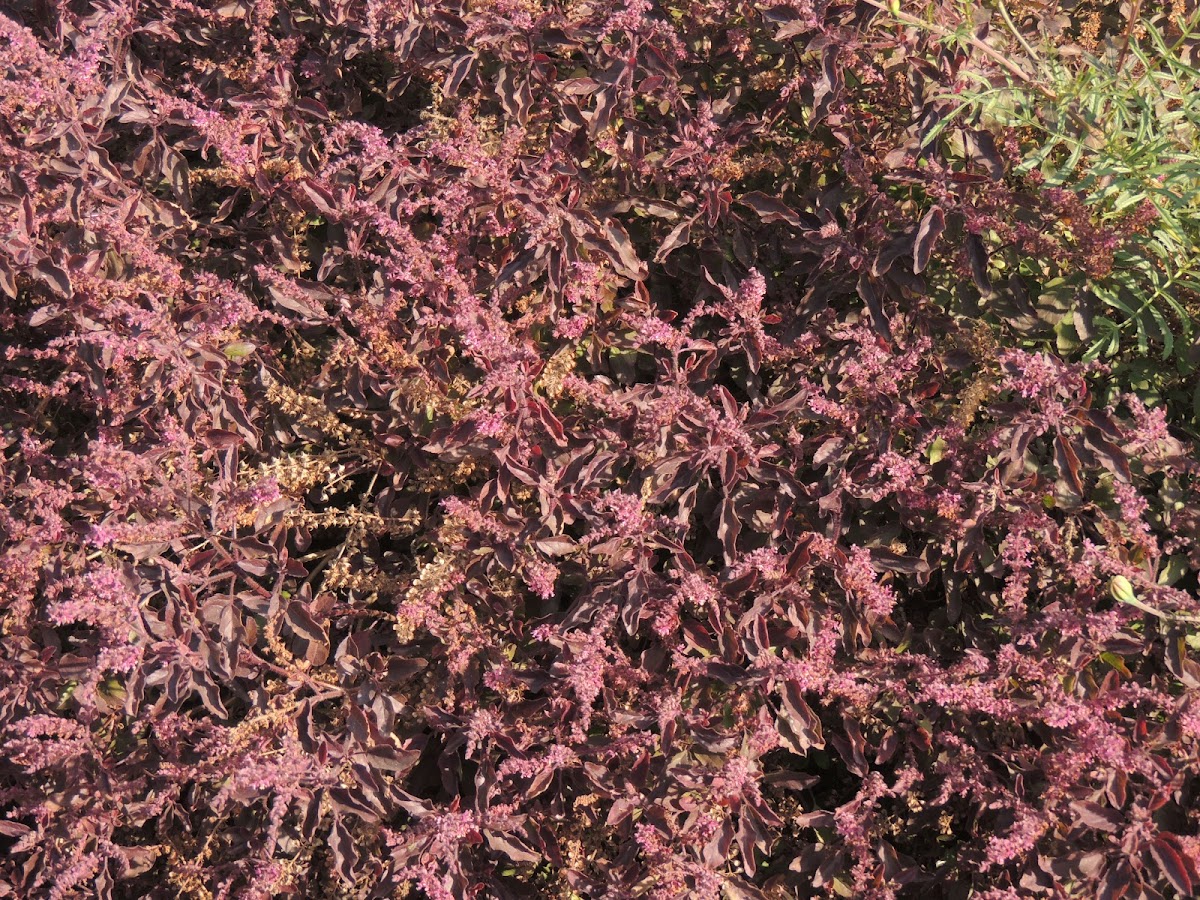 This was the only garden we could visit, due to our time constraints. However, we did spend some more time wandering around the area, exploring more of what lay beyond the grand temples of Khajuraho. 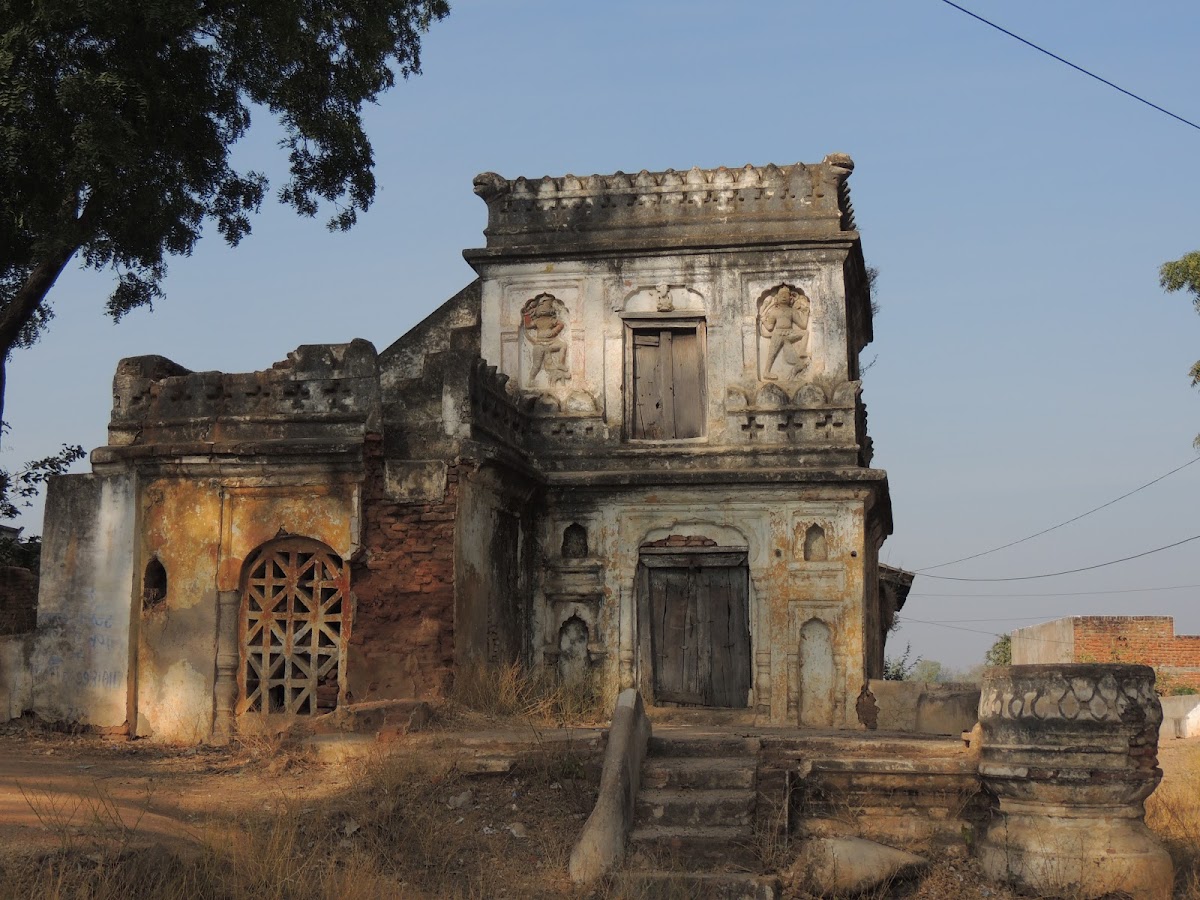 It just happened to be market day, so we had fun just walking around…. 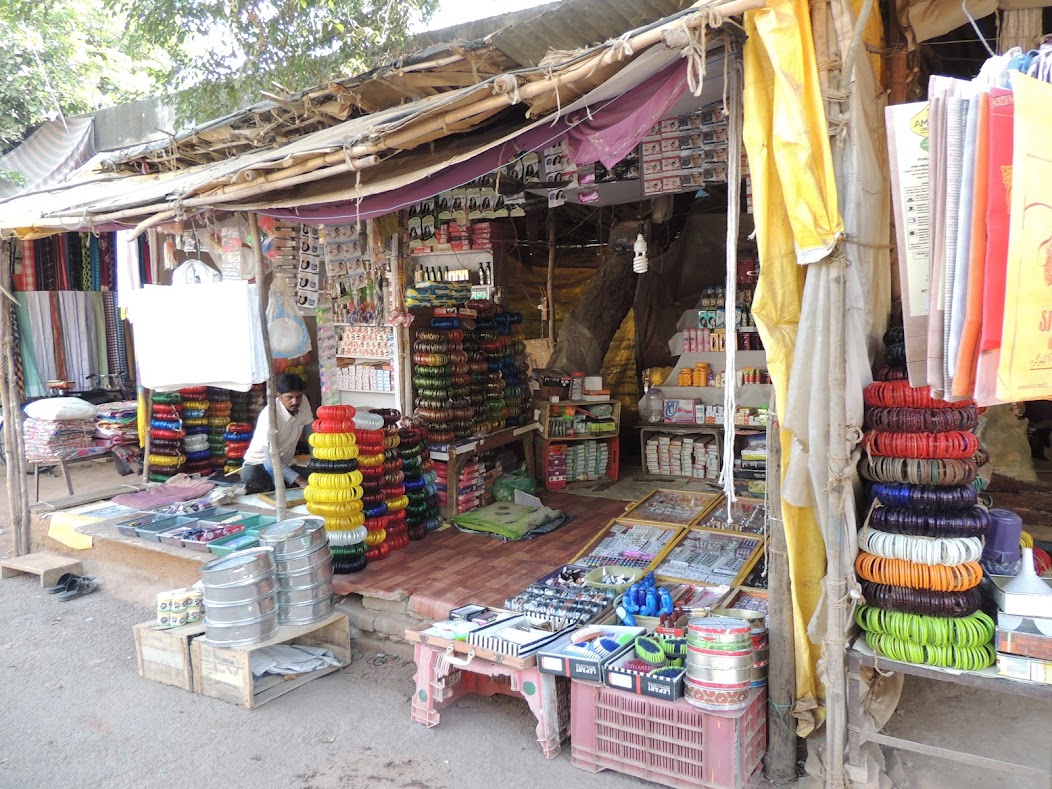 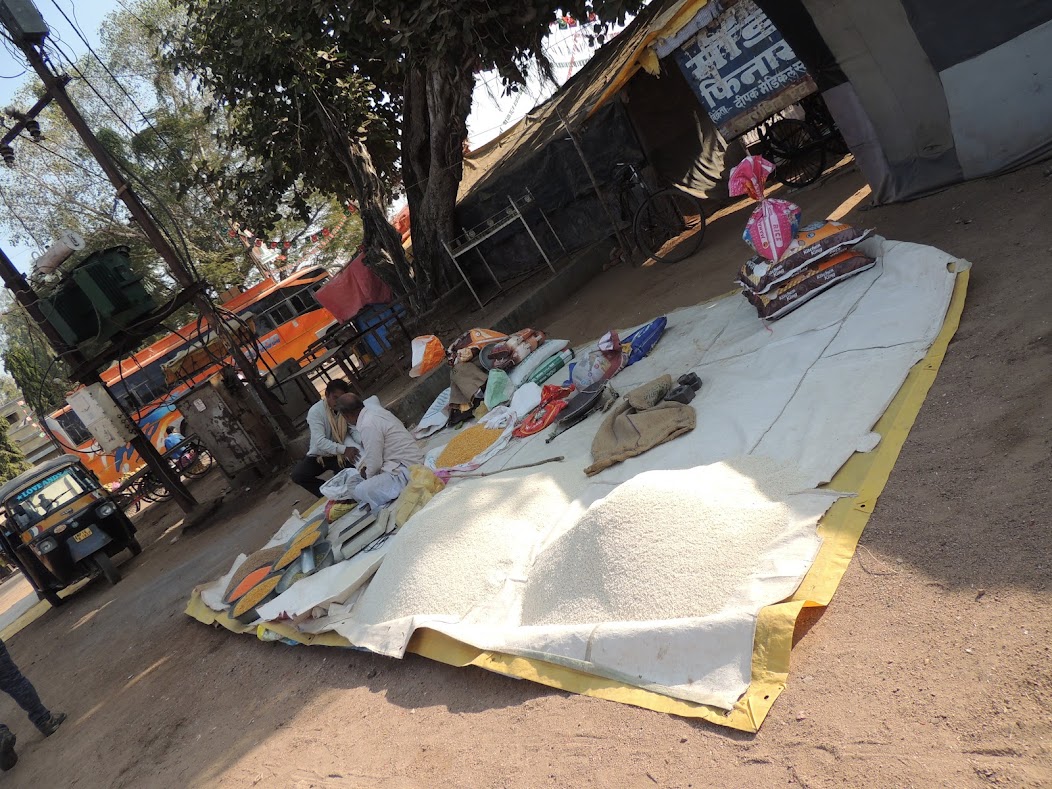 … and of course, buying stuff as well…  I bought some of the jaggery sold here… 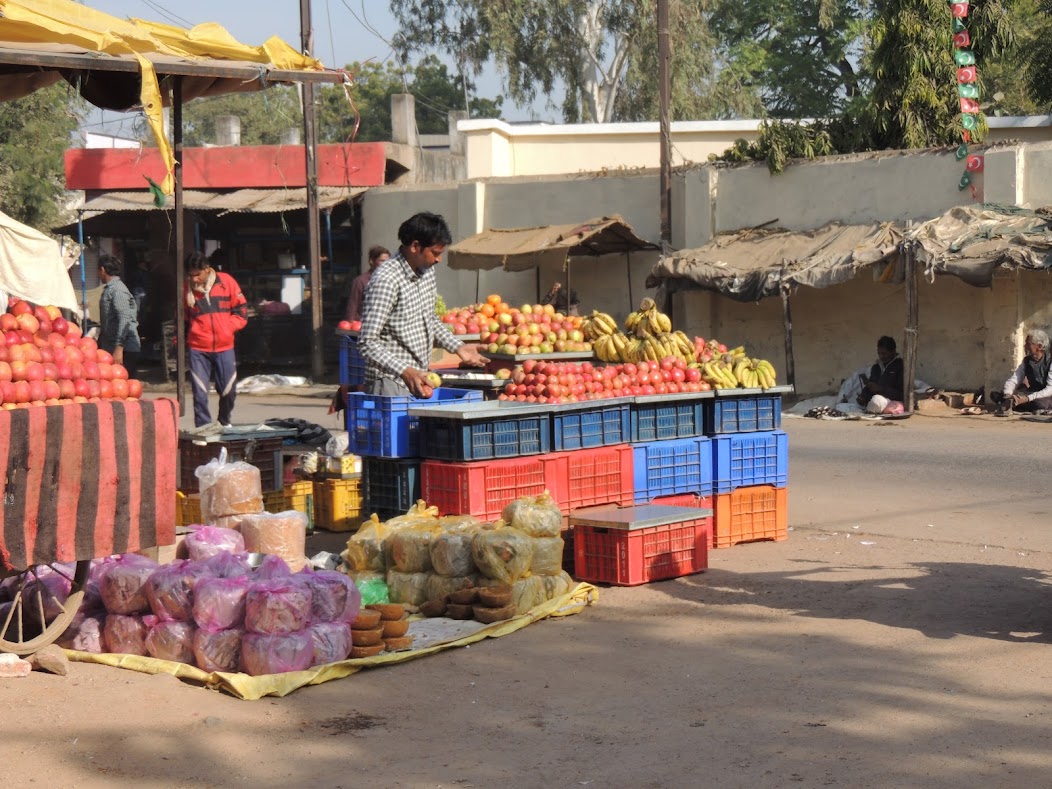 And am still using it at home!

By this time, our driver realised we liked temples. So he took us to another one, hidden away in the maze of crumbling buildings, which would once have been grand structures. 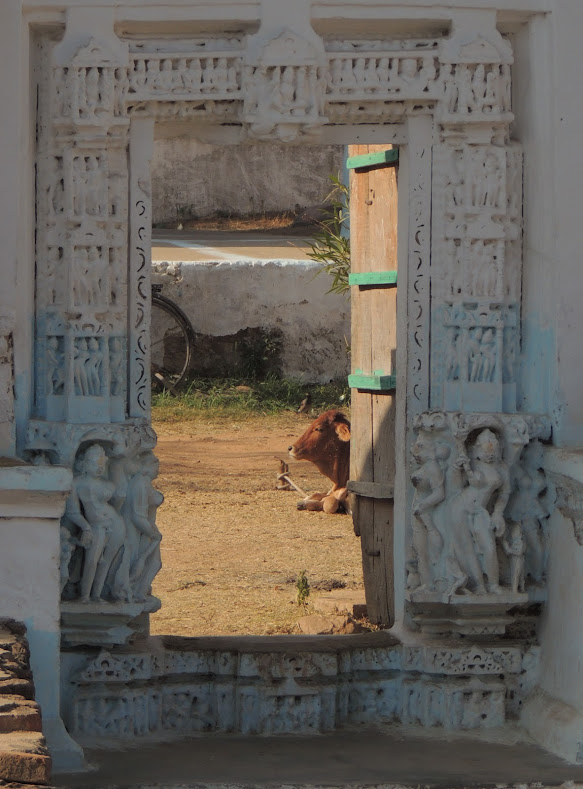 But inside was another story! A brand new, brightly painted marble idol stood there.

Shiva and Parvati as Uma Maheshwara is a regular motif on temple walls. However, I have never seen one inside a sanctum. If I had to guess, I would say that the temple would have housed a lingam, which would have been lost when the temple crumbled. A sculpture of Uma Maheshwara from the original shrine would have been placed in the sanctum of the new temple. But, that too might have been weathered and might have broken off, and replaced at some time by this brand new one! What do you think? Is that explanation plausible enough?

Driving back home, we noticed more interesting features, such as these figures on the entrance gates of gardens or farm houses…. 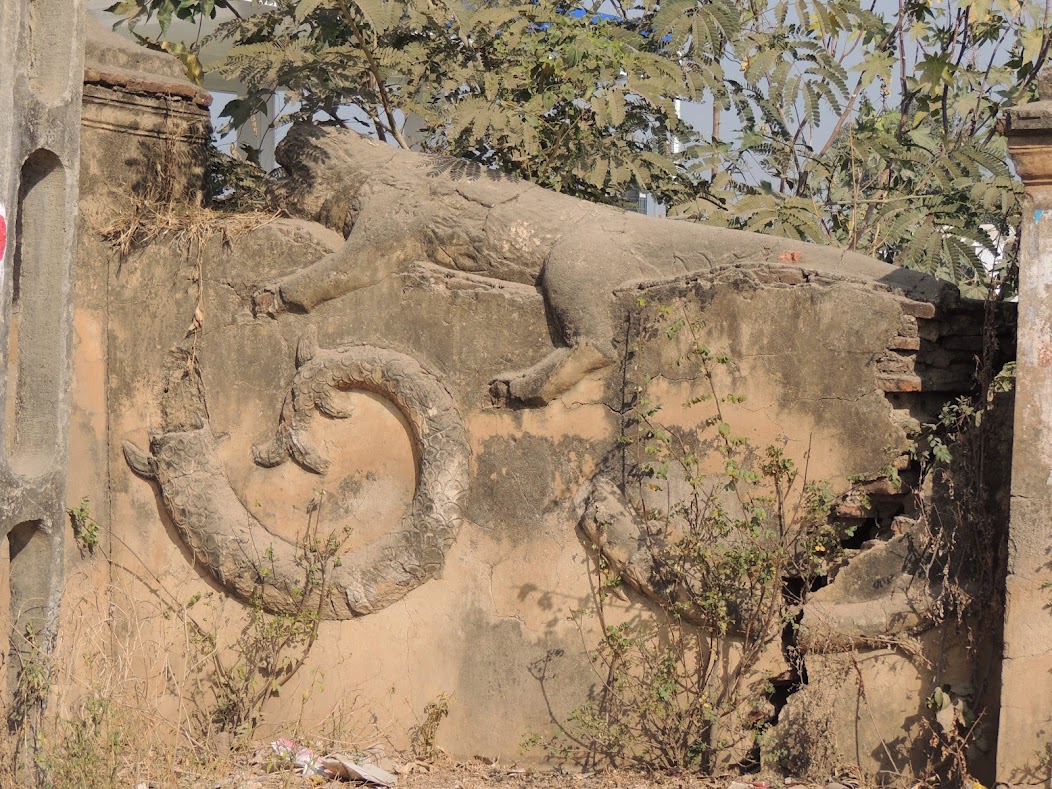 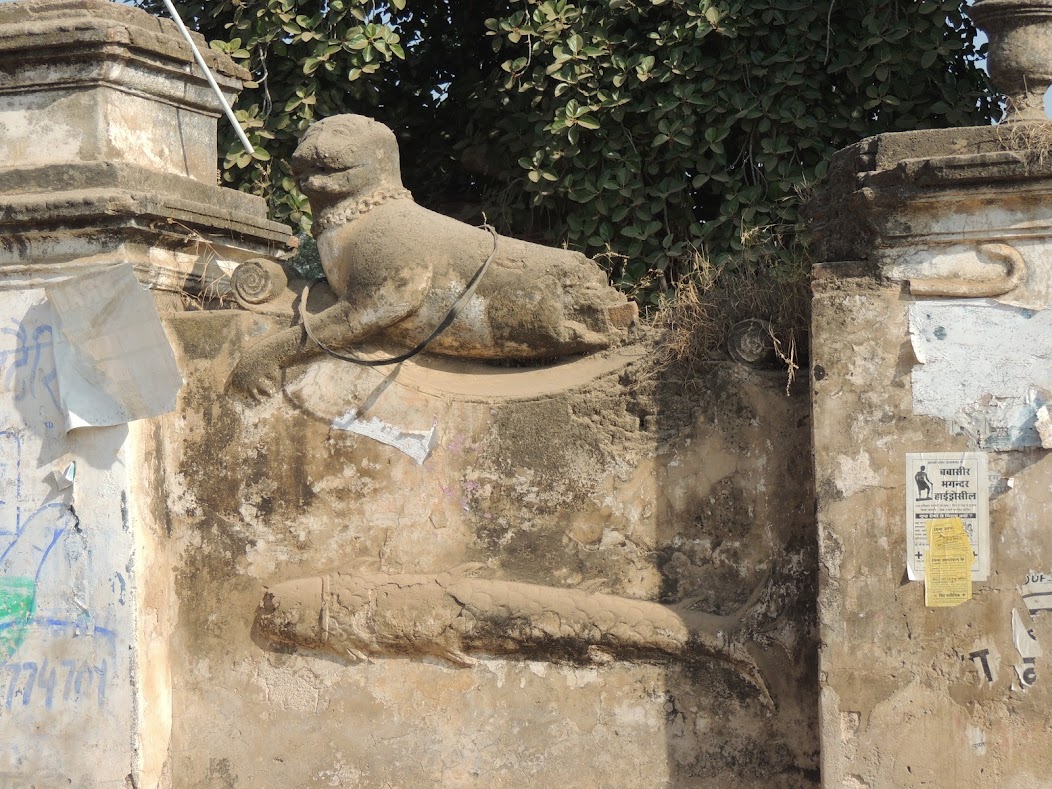 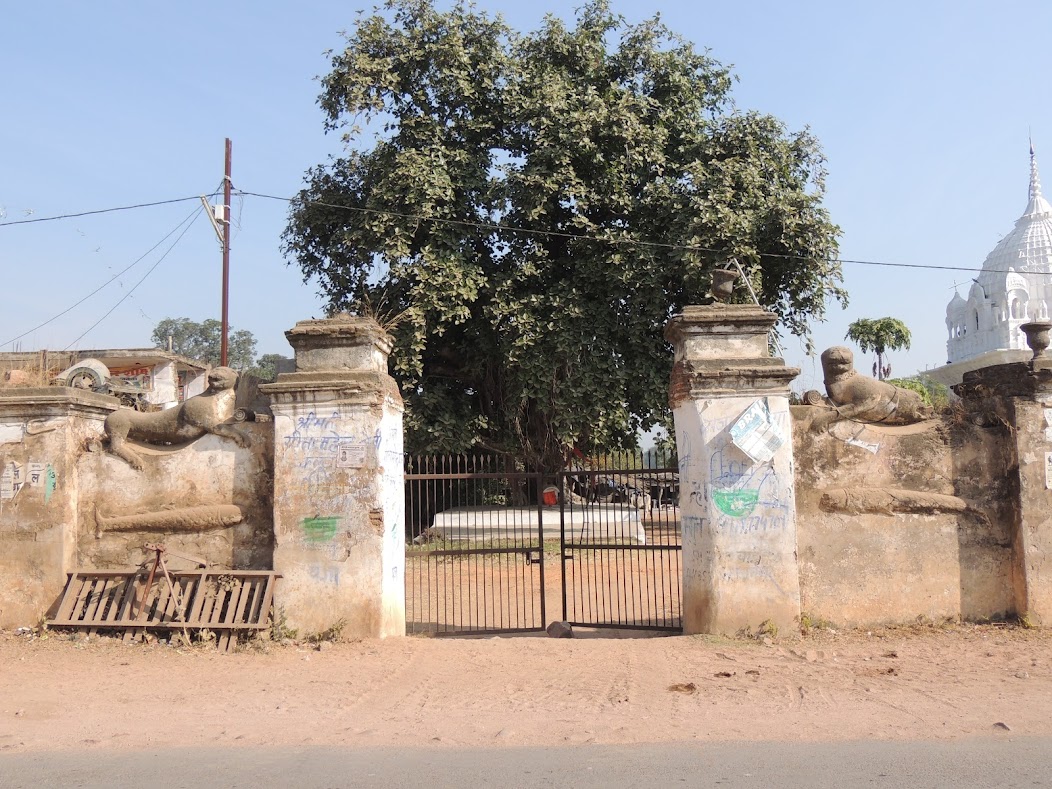 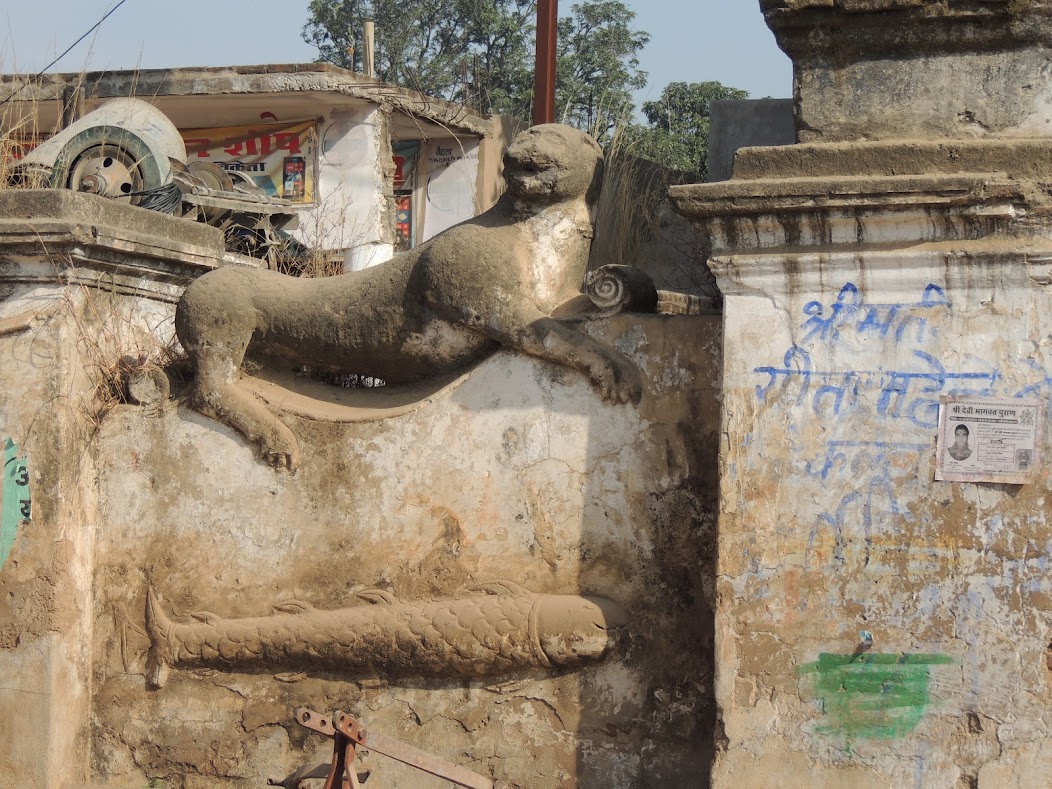 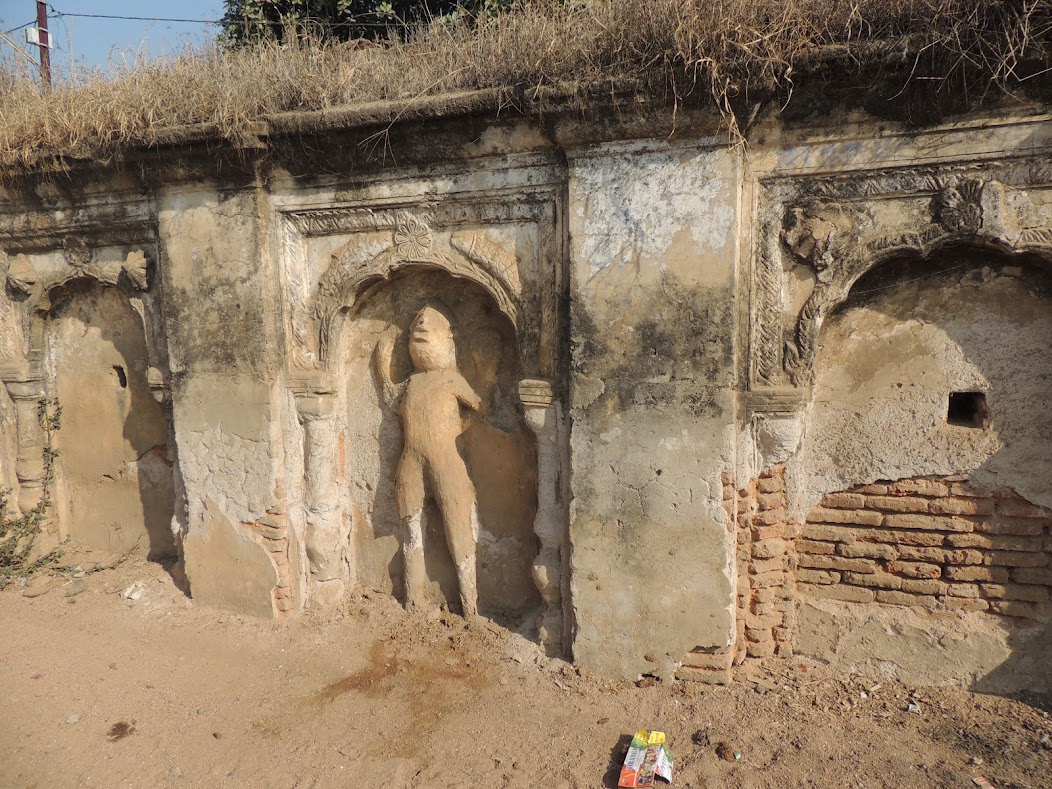 I have never seen something like this before. Have you? What do you think they symbolize? Are they simply decorations for the gates and compound walls? Are they influenced by the lions outside colonial structures? I have absolutely no idea, but I would love to hear your thoughts.

Exploring this side of Khajuraho brought forth a whole lot of thoughts, on tangible and intangible heritage. While I would be the first to admit that none of these are in any way comparable to the amazing temples of Khajuraho, I can’t help rue the fact that we turn a blind eye to everything else. While we choose to only highlight the erotic facets of the temples, and ignore the deeper ideas behind them, we also choose to forget that Khajuraho was also part of a larger scheme of things, part of a kingdom, with secular structures as well. Even as we refuse to understand the concepts behind the 9th to 12th century monuments, we choose to completely ignore the 18th century monuments which are part of the history of Khajuraho too. The change in ideas and concepts leading to changes in architecture and visual narrative is something we aren’t even aware of.

I spent almost four full days at Khajuraho, but as I write this post, I wish I could go there again. There is much I still have to see in the temples, and while I shall never tire of them, I would certainly like to explore more of this, the other side, of its heritage. It is, after all, part of the story too, a story we still do not completely know.