April 04, 2008
We spent the first day at the resort catching up on sleep, and the second morning passed by just getting acquainted with the resort. I was looking forward to going to the fort soon. We had been told that the best time to visit it would be in the evening, as the fort would be lit up around 7 P.M. We left the resort around 4 P.M. so that we could take in the sights before it got dark, and then wait until the lights were switched on. The weather had been pleasant since our arrival, which in itself was surprising. We had expected it to be quite hot, and packed in all our summer things. It turned out to be quite cool up there, and that evening it was also a bit cloudy. 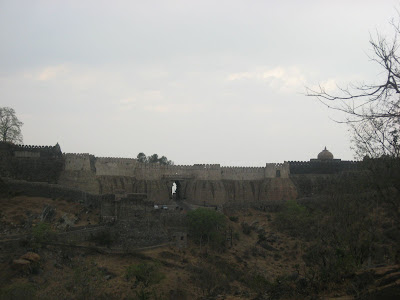 Our first view of the Kumbhalgarh fort

The Kumbhalgarh fort is an impressive edifice that remains hidden from view till the last bend in the road, less than a kilometer away. It is only after we enter the first gate of the fort, and the road turns towards the fort, that we can get our first glimpse of the fort and its famous wall. 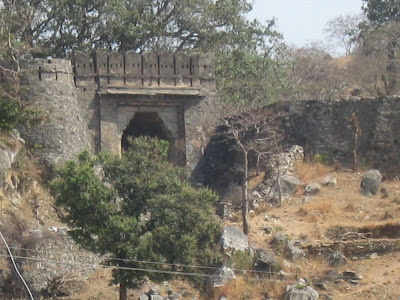 The first gate of the fort

The driver of our vehicle stopped at the main entrance, where we had to buy a ticket for entering the fort, and told us to just follow the road to the left. Right at the entrance was a temple to Lord Ganesh. 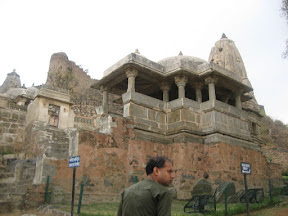 We had scarcely set foot inside the fort that it started raining!!! It wasn’t a very heavy rain, but at that height, along with the strong wind, it was quite an experience, climbing up the steep path to the palace at the top of the fort in the pouring rain. I have always enjoyed getting wet in the rain, and it was a pleasure to get soaked at such an altitude. Even more than that, it was good to see that Samhith too enjoyed the rain, and made the most of it. He ran on, ahead of us until I scolded him and made him hold one of our hands. The wind was so strong, and the path so steep, I was afraid of him falling down, but thank goodness, nothing of the kind happened! 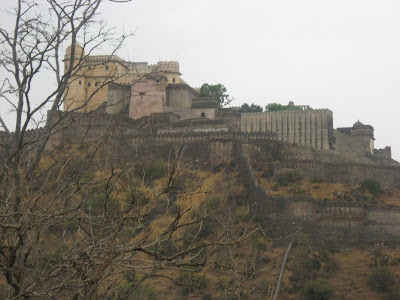 We walked along, enjoying the view, and appreciating the way the fort and palace had been built. There was a sign right at the top, pointing out the place Maharana Pratap had been born, and we expected someone to be there , someone who would tell us the story of the fort, but everything was securely locked, and there seemed no sign of life anywhere around. It was only after we tried out another path to the palace that we found one, single door open, and a watchman, who wasn’t too interested in talking to tourists. There were a couple of other families there, also from our resort, who seemed to be a little more informed about the fort than we were, so after a round of the palace, and a small temple of Durga Maa inside a smaller palace, we turned our steps downwards, towards the temples we could see at the ground level. 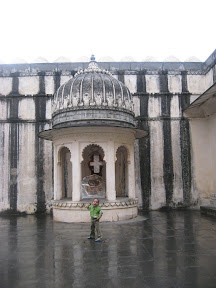 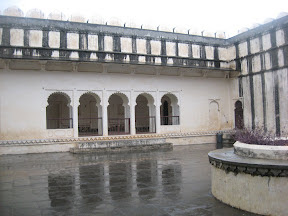 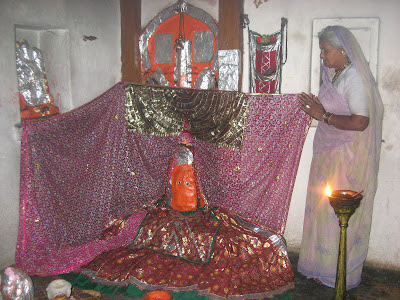 The Durga Temple inside the palace

The first two temples that we saw were closed, and we were told that there were no idols inside. So, we turned towards the wall which had been beckoning us ever since we entered. There are points all along the wall (on the inside, of course), where one can climb up to the wall, but only some are in good condition. We used one of these to get up there, and it really was awesome! We had heard that the wall was broad enough for four horses to move along at the same time, but up close, it looked even broader. Four horses wouldn’t have had to move very close to each other at any point on the wall!!! 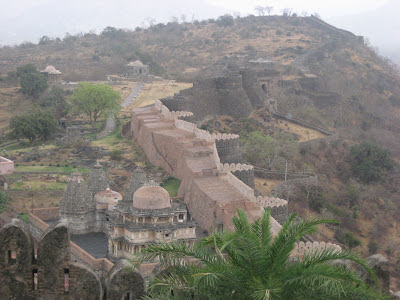 The wall, we learnt, had been built over a period of 14 years, and was about 36 Km long! The men must have been skillful indeed to have built such a masterpiece which has survived centuries, and still is in such good shape. I can’t imagine a building of today surviving even a fraction of the period, when subjected to the vagaries of nature, as this one would have faced!!! The wall apparently is in good condition all over, except one section, which crumbled recently. But here, it must be mentioned, that there is a serious lack of interest displayed by the authorities here. It is true that over the past few years, the government has tried to restore the palace, temples, and fort, and make it a tourist attraction, (the evening lighting, and a proposed sound and light show are efforts which the govt. is making in this direction), but much more can be done. For example, it is only part of the wall that has been cleaned, making it possible to walk on it. The rest of the wall lies in disrepair. When we asked if it was possible to walk all along the wall, we were met by stares, rather than answers. It is a matter of great pride that we have places like this in our country, but we need to make a lot more effort to maintain them, and make them attractive enough to draw more people towards them. It might not be possible for people to walk the entire length of the wall, but I am sure there are more people like me out there, who would like to make more trips to different sections of the wall, and visit the other temples which are inside the fort complex, but much farther away. 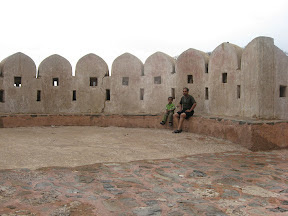 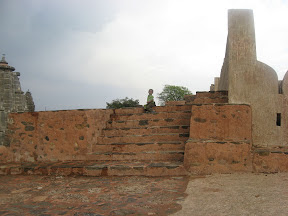 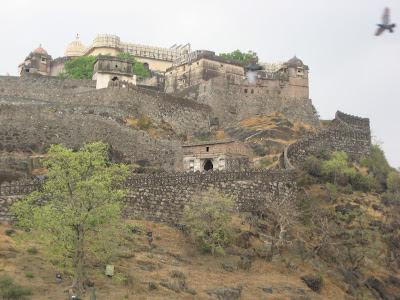 A View of the Palace from the wall

Talking of temples, it seems there are 360 temples inside the fort, of which 60 are Hindu temples, built by Maharana Kumbha, while 300 are Jain temples, which date back to the 6th or 7th century, when the Jain king, Samprati ruled over this place. Most of these temples are in ruins and only a few have idols now. Of these, the most important one is the Neelkanth Mahadeo Temple, the chosen deity of Maharana Kumbha and his family. 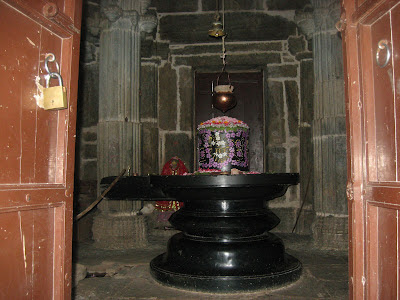 The main Shivaling, Neelkanth Mahadeo, is an impressive one, being about 5 Feet in height. It was here that we found an old man, who, when asked, happily recounted to us the story of this impressive fort.

Meanwhile, let me move on ……. After we spent some time at the temple enjoying the view, and thrilled to see a peacock, we headed back to the wall to see the lighting. The lights are put on every evening at 7:30P.M. for about 20 minutes, and it is, indeed an awesome sight. The fort glows gold against the black colour of the night, and one can just sit there for hours in the cool breeze, drinking in the sight. However, hours is what we don’t have, for we have to climb down the wall before the lights go off, and everything is black, so we hurried down back to the car, and on out return journey, managed to get a few photos of the fort while lit up. 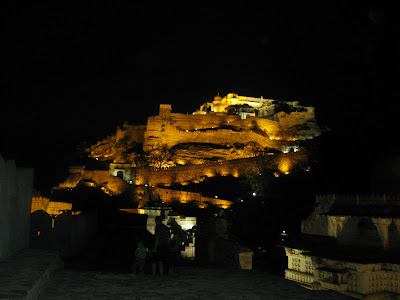 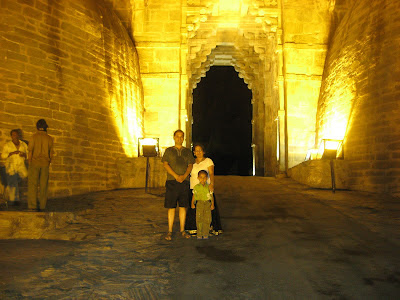 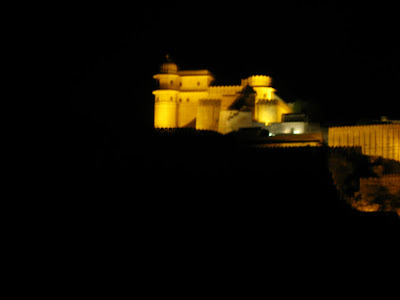 This ended our jaunt to the fort, which is undoubtedly, one of the most impressive that I have ever seen. One of our fellow travelers from the resort told us that the Chittorgarh Fort is the best in the whole of the Mewar area of Rajasthan, even better than this one, but I can’t comment until I have actually seen it. Las year, we had visited Jodhpur and Jaisalmer, and though Mehrangarh Fort in Jodhpur is undoubtedly maintained much better, and the Jaisalmer fort is unique as the only fort in which people still live, this one has been much more impressive. It is here that one can actually imagine and feel the life that the Rajputs led- their valour, their pride and their greatness!
Club Mahindra Fort Kumbhalgarh Palace Rajasthan vacation