April 15, 2008
Our final day at Kumbhalgarh dawned bright and clear. We had decided to leave early in the morning and visit some temples along the way before reaching Falna in time for our train. Accordingly, we were provided with a driver who knew all the temples on that route. Prakash was indeed a well informed driver who had made the temple circuit on many occasions. 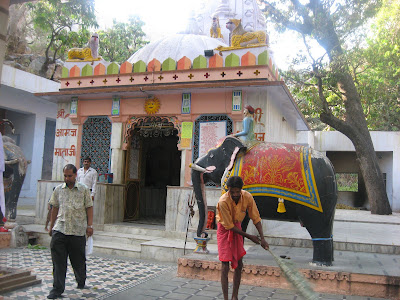 The Amaj Mata Temple was the first temple he took us to. It was not on my list, but he said we would enjoy it. This is a small temple to the goddess on a small hill, remarkably fertile. Just outside the temple is a tank, which is full of water throughout the year. Even though it was early in the morning, there were a number of people filling water from the tank. The temple is the usual kind, with an image of the Devi. Life-size sculptures of two elephants stand guard at the door, and on the side of the temple, under a banyan tree, are the images of the “NavaDurgas’, nine forms of the Goddess --- a simple, but nice temple. 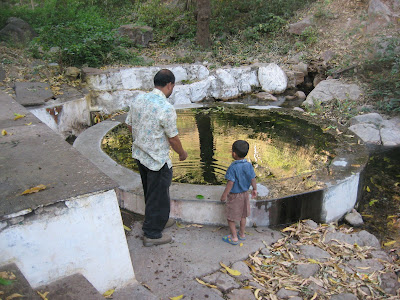 The perennial source of water 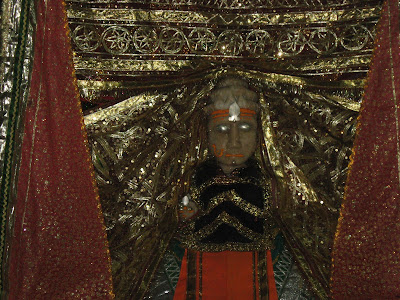 The image of Amaj Mata 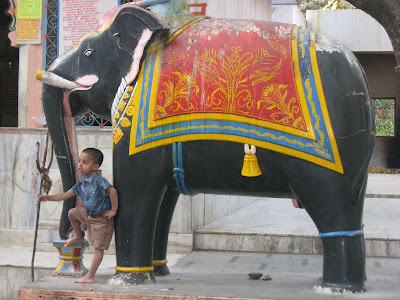 Samhith and the temple elephant 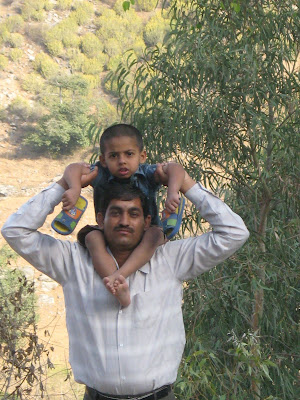 Samhith with our driver, Prakash

We then moved on to Charbhuja to see the famous Krishna Temple. This is supposedly the only temple where Lord Krishna is depicted as a warrior with four arms and weapons in every arm. We were told that the idol of Krishna in this form had been installed by the Pandavas on their way to the Himalayas after they gave up their kingdom. Whatever the story, the temple is a very beautiful one, and the image of Krishna, or Vishnu, dressed as Rama on the day we visited is enchanting! 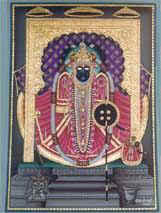 We had a hard time getting breakfast that day, as it was the last day of the Holi festival (celebrated in this area for 10 days), and everyone was out playing Holi. All the shops and eateries were closed. We had to make do with some Poha (parched rice) and Samosas available outside the temple.

Mucchal Mahavir was our next stop. I have already mentioned the story of this temple in m earlier post. So I will try to avoid repetition, and stick to only describing the temple. The temple is a little off the main road, and is serene and calm. This was the first Jain temple I had ever visited, and was surprised to see that just like most Hindu temples, there was Lord Ganesh at the entrance, and Kala Bhairav, or Bhairon, as He is locally known, at the exit. The temple is just like a typical Jain one. Construction was going on, as they are in the process of renovating the temple. It is a sign of generosity, as well as farsightedness, that they have constructed rooms and other facilities for the pilgrims. 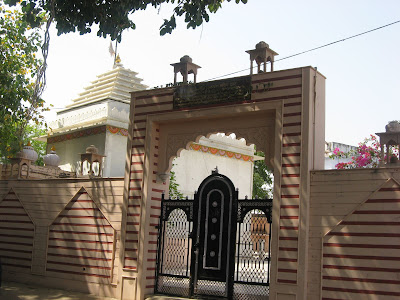 The Ganesh Temple at Ghanerao
While we were returning from Mucchal Mahavir, at the place where we re-joined the main road at Ghanerao, is a small Ganesh temple. It doesn’t look very impressive from the outside, but inside is a life-size idol of Lord Ganesh, with his consorts Riddhi and Siddhi. On the side are idols of Hanuman and Bhairon. All these idols are about 5 ½ feet tall! The legend goes that the idols of Ganesh and his consorts were to be installed at the Jaswant Thada in Jodhpur (For details about Jaswant Thada, see my earlier post on Jodhpur). A saint who belonged to this area of Marwar saw the idols and asked the King to give them to him. The king wasn’t able to refuse directly, but didn’t want to give them to the saint. Acting on the advice of his queen, he told the saint that he would give the idols to him, provided the idols would walk up to Ghanerao, where the saint had his hermitage, and where he wished to install the idols. To everyone’s surprise, the idols started walking and walked all the way up to the hermitage, where they were finally installed. The saint’s Samadhi, said to be a Jeeva Samadhi (where the saint is said to be alive in Samadhi –state) is nearby. The old temple apparently fell down, and the present temple has been recently built. Again, regardless of whether we believe in the legend or not, the idols are beautiful, and worth seeing. This temple is certainly a must-visit for anyone touring this area. 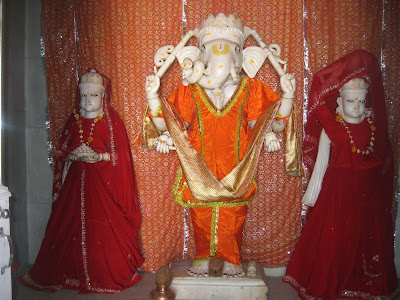 The idols in the Ganesha Temple

I had read of many more temples in the vicinity when I checked up on the net, and wanted to visit all of them, unfortunately, Samhith started vomiting soon after, and we had to change our plans. I wanted to see the magnificent Jain temples of Ranakpur, so we decided to go there directly and then proceed to Falna and wait for our train. On the way we only stopped at the Keerthi Stambh, a tower built recently by Jain devotees. It is a huge tower, the biggest in the area, which one can climb. Inside are paintings which depict the life of Bhagwan Mahavir. If Samhith had been better, we would have enjoyed it a lot more. As it was, we just cast an eye over the beautiful paintings, and rushed back. But we weren’t allowed to get away so easily! A priest arrived just as we were coming out of the temple. Seeing Shankar, he called us inside, and asked him to perform the afternoon Aarthi to the Lord. We were only too happy to do so…….

Ranakpur at last! I had heard so much and read so much about the temples, counted among the best. And they rally are so impressive, even from the outside! We reached after noon. Photography inside the temples is allowed after 12:00PM, so we stood in the queue to take a ticket for the camera. We were the only Indians in that queue. In fact, we were the only Indian tourists at that time. The rest were all foreigners, from various countries. The ticket queue was so long, and Samhith was so restless, I decided not to take the ticket, left my camera with Prakash, and went in, determined to at least enjoy the temple with my eyes, if not my camera! I will pass over a description of the temple, as so much has been written about it, but I will certainly say that it is among the best architecture I have ever seen, and certainly the most impressive. Perhaps the best part is that there are scores of guides inside, eager to tell us all about the temple. If Samhith had not been so restless, I would have spent hours gazing at the magnificent arches, and ceilings, but things being as they were, we were out within half an hour. I made up for not taking my camera by buying a full set of photographs, and turned our car towards Falna. 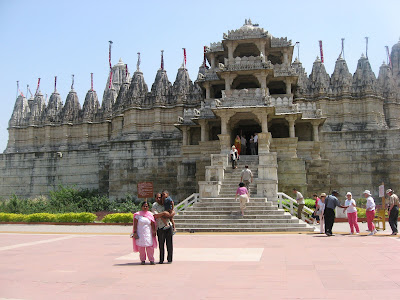 Outside the Ranakpur temple

We reached Falna with an hour to spare, and Prakash took us to the Golden temple of Falna. This is a Jain temple which has recently been covered with gold plating thanks to donations from devotees. The temple, unfortunately was closed, so we went to the station, and waited for our train.