Usha, this one is especially for you, since both Samhith and I remembered you and wished you were with us for the Ganesha tour this year too..... and you will be thrilled to hear that Samhith didn't remember much of any of these ganpatis except that he saw them with you!
First on the list is the Duke's Ganesha.... 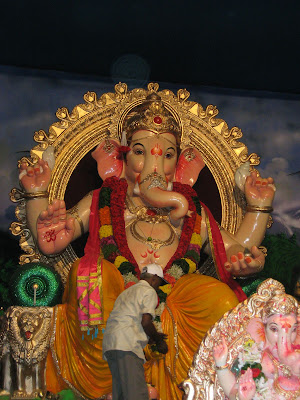 The decoration was based on the story of a king and his cow herd who find the royal cow giving up all its milk  in an ant hill. The cow herd strikes the anthill with his axe, but is stunned to find blood. On digging further, they discover that the ant hill covers a Shiva Lingam. Usually, this set up is an animated one - kind of like a puppet show with a narrator in the background, and the characters move a little. However, this year, I elected to avoid the rush, which meant that the show wasn't on yet... much to Samhith's chagrin! 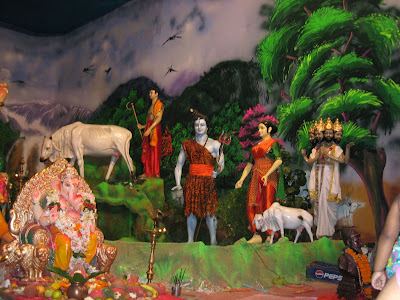 Next in line is the R K Ganpati (for those of you who do not know, this is the Ganesha at R.K.Studios, a tradition going back years... when Raj Kapoor and his entire family would turn up for the celebrations... To give due credit, part of the family still turn up for the immersion, drawing crowds galore!!)- which was simple, and just as usual. 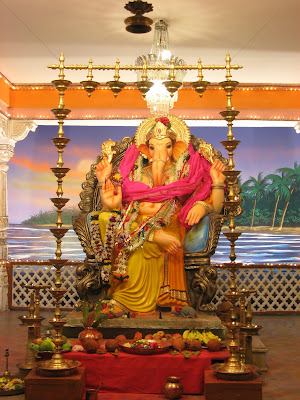 Next door to RK is another Ganesha - the pattern is always the same, but the decoration is usually good. However, this year they seem to have been a bit confused - I couldn't understand what Vitthala was doing, set against a backdrop of the Himalayas, with Shiva meditating on one of the peaks!! But then again, maybe they were just trying to re-use some of the stuff they had used last year... I distinctly remember the snow covered peaks and the image of Shiva from last year!! 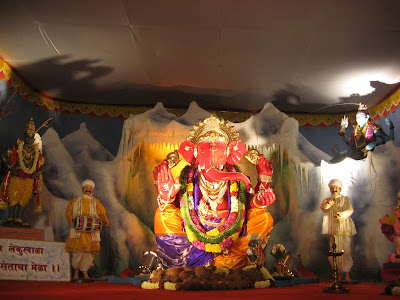 With this, I am through with all the Ganeshas I can possibly see in my neighborhood. Going further to see some of the popular pandals is out of the question, especially thanks to the crowd! So lets see if I still manage to see any more!