September 23, 2011
The fourth cave at Badami is the only Jain cave among the four. This is also by far the simplest cave, though there are quite a lot of renditions of the Jain Tirthankars. This was also the only cave which the school students gave a miss, so it was practically empty! Unfortunately, this cave seems to get less than its rightful share of eyeballs, so it was dark and dank. The inner sanctum was so dark that I could see nothing! Our guide didn’t have a torch, and since it was late in the evening, I managed to get a decent capture of the sanctum with my camera in the ‘night’ mode!

The sanctum houses an image of Mahavira…. 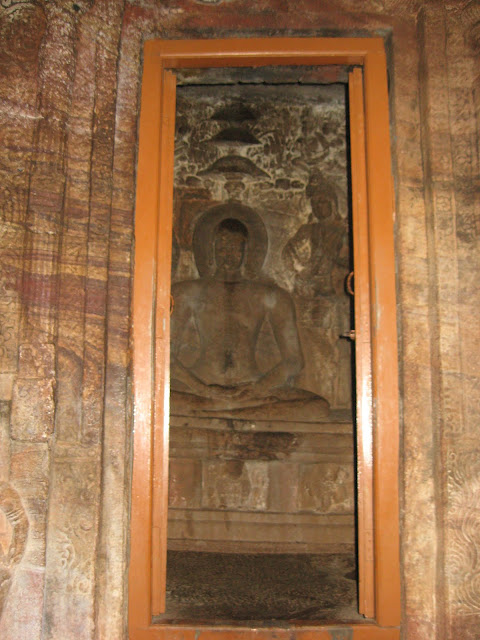 Outside are many interesting carvings of Jain Tirthankars….. My knowledge of these is rudimentary, so let me just take you on a photo-tour… 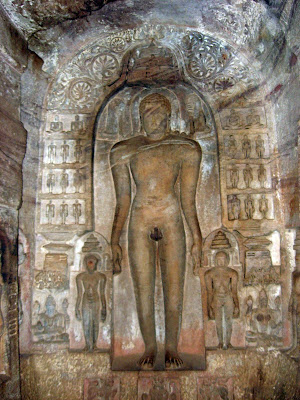 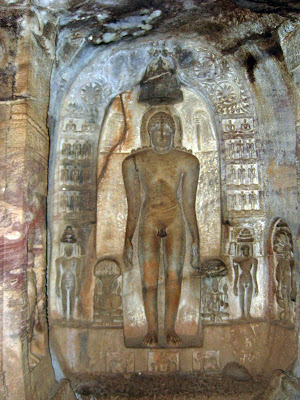 These three look almost identical, but when you look close, there are plenty of differences. Sorry, I dont know enough to identify them! 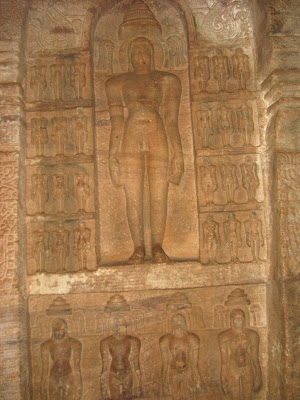 Our guide attempted to explain some of these sculptures to us, but without much knowledge of Jainism, much of it went right over our heads. Samhith especially was completely lost, unsurprisingly, and he had just one question – Why were none of the Tirthankars wearing anything? He seemed a bit embarrassed, which is when it struck me why the cave was empty – the teachers had obviously deemed this cave ‘unsuitable’ for  the students!

What hypocrisy we practice in the name of ‘moral standards’! We allow kids to see programmes and movies which are much more explicit, yet we fail to allow them to see something which talks of a higher goal – of being free of all attachments, even to cloth! This was where our guide came to our rescue, and beautifully explained about the two sects of Jainism – Digambars, who believed in letting go of all attachments, and wearing nothing; and Shwetambars – who also let go of all attachments, but wear only white, unstitched cloth. Explaining the difference and the greatness of the saints depicted in the cave seemed to take off some of the embarrassment, and he wondered how they managed to live like that, wearing nothing, eating very little and meditating all the time! The sculptures had at last managed to make him understand how difficult it was to do penance, to meditate, to let go of attachments and think only of God. He listens to these things in stories all the time, but I think it was here that he actually got a glimpse of what it really was like! There is a long way to go before he really understands, but I believe we just started our journey towards true spirituality!

The fourth cave at Badami was the last we visited on this trip, but I think it reinforced my belief that nothing is too great to be explained to children, that there is nothing they can’t really understand, if explained at their level. But most of all, it reinforced my belief that if we want to preserve our heritage for our descendants, we need to make our children aware of it first, and that it is never too early to begin!