A Tour of Ganesha Pandals.. and some thoughts on the festival

September 28, 2012
The ten day festival of Ganesh Chaturthi is coming to a close. Tomorrow, the idols will head to the sea, amidst chants exhorting Him to come back early next year. Meanwhile, come with me, as I take you through some of the Ganesha Pandals I went to, this year...

Matunga remains one of my favourite places to visit at this time.. Here are some of the Ganeshas we saw there... 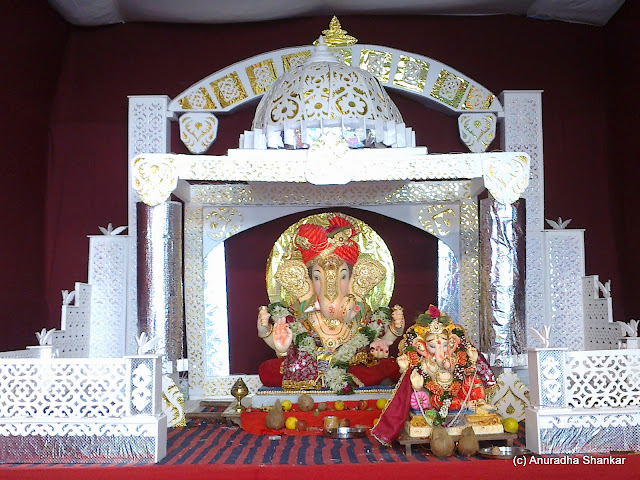 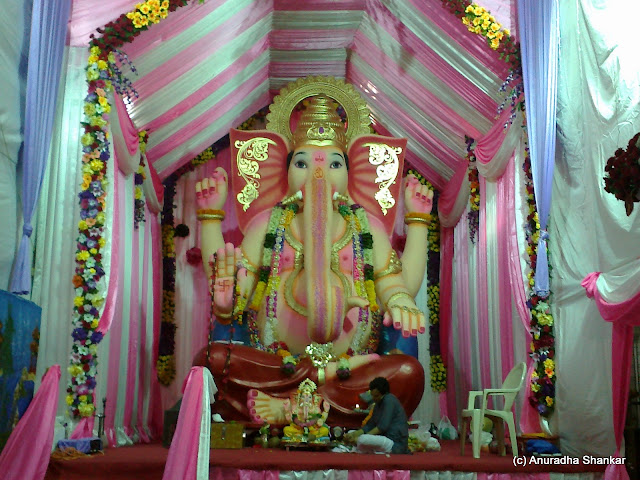 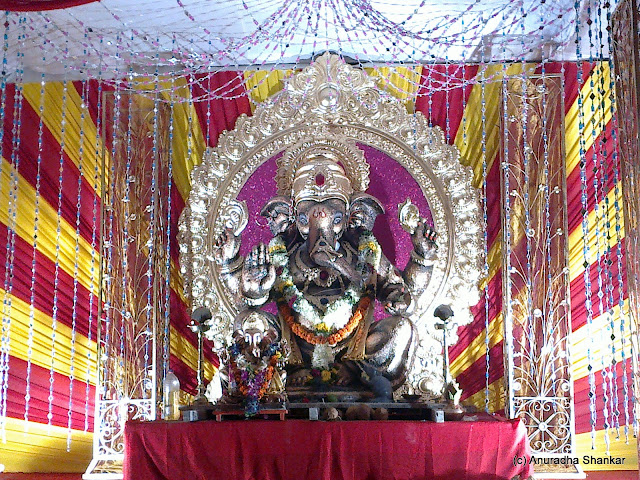 I remember a time when the Matunga Flower Market Ganesha used to be made of flowers. Today, the Ganesha is a normal one, but the decoration is still completely made with flowers. The arrangement is changed every 3 days, so you get to see 3 different arrangements. This is the first arrangement this year.. 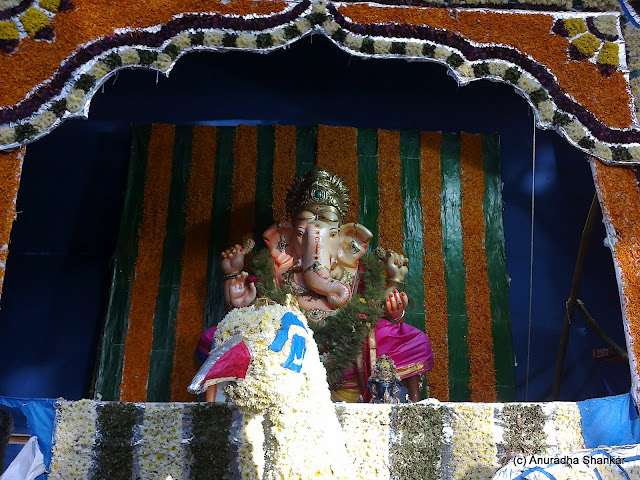 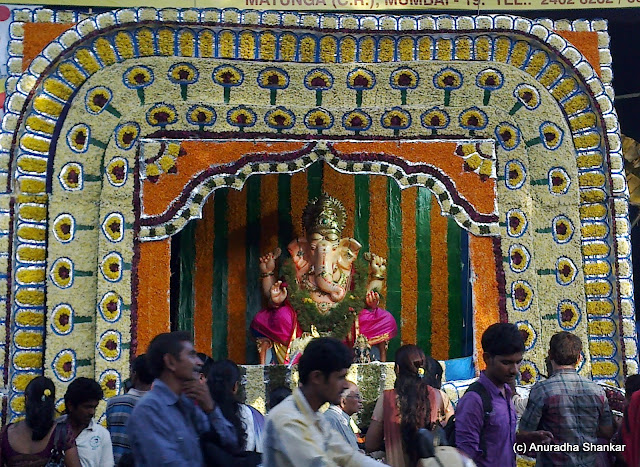 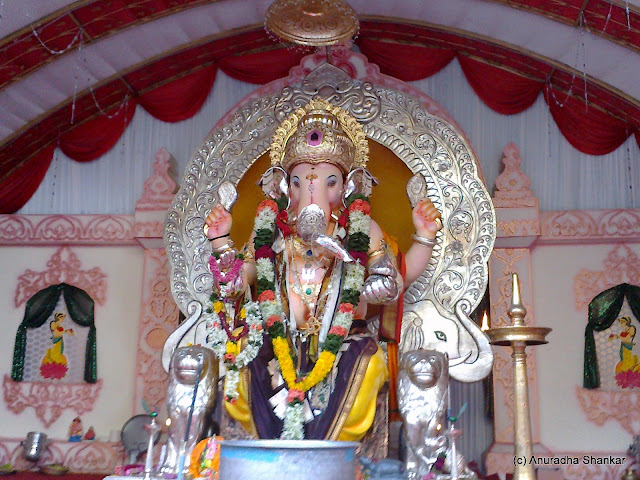 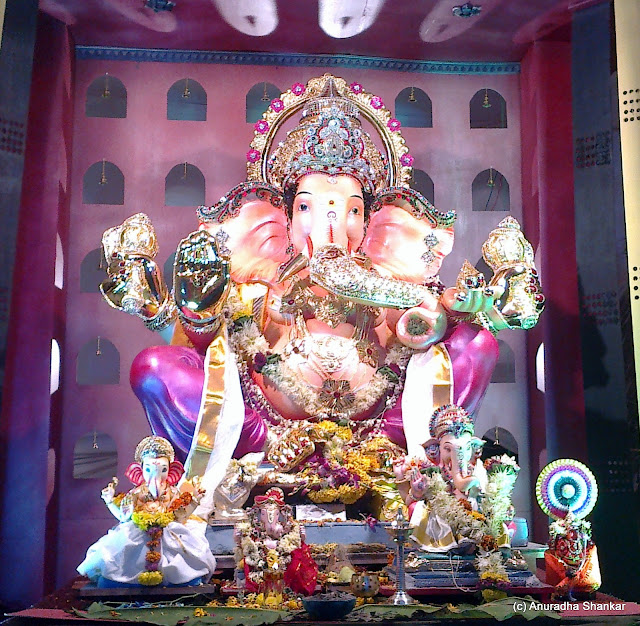 Living in Chembur, for the last few years I have been doing the rounds of the Ganpatis in my locality. Here are a few... 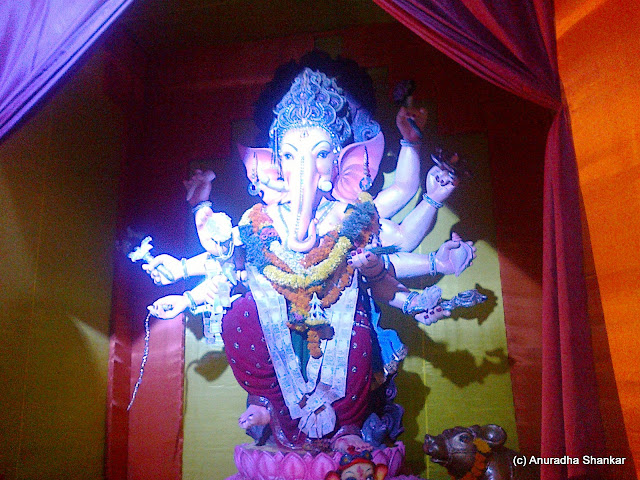 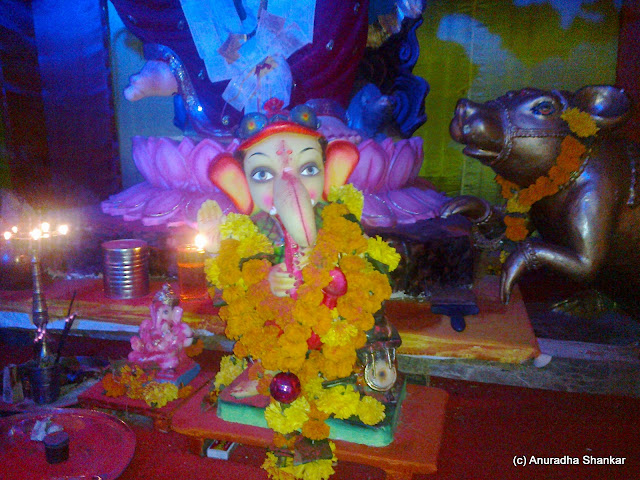 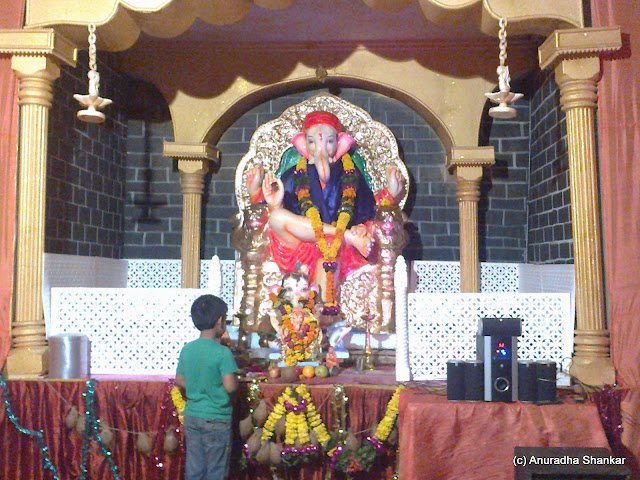 The Duke's Ganpati is all time favourite with Samhith. For one, they usually have scenes from mythology, and the props move around, which excites him. But even more that that is the fact that they always give poha (puffed rice) and sugar as prasad, which he loves!!!! So, how could we miss it? 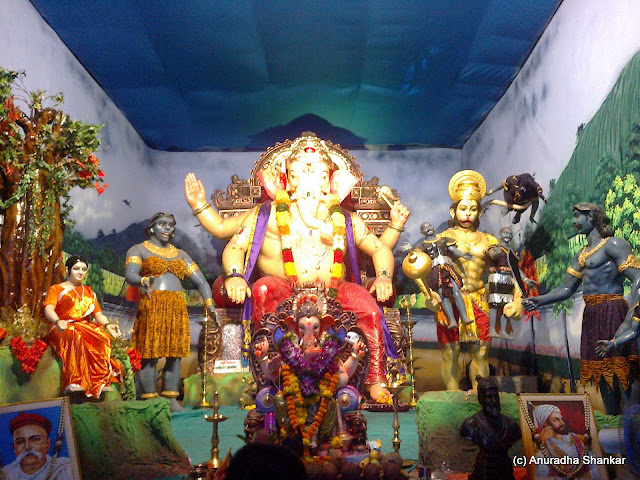 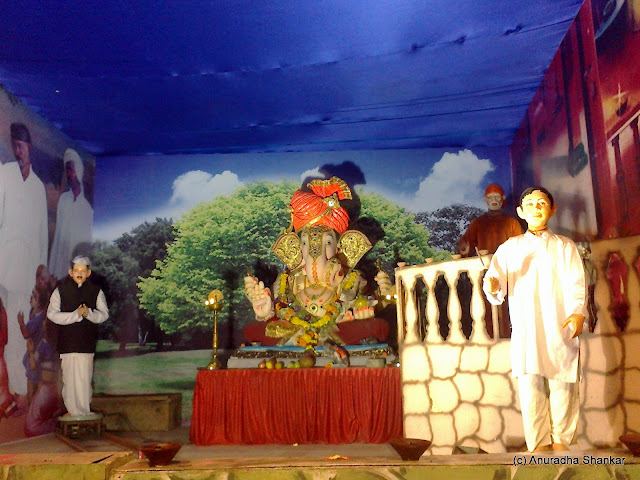 The R.K.Studios Ganpati is the same each year - not just the idol, but the decoration too..But for some odd reason, Samhith still doesnt want to skip it!! 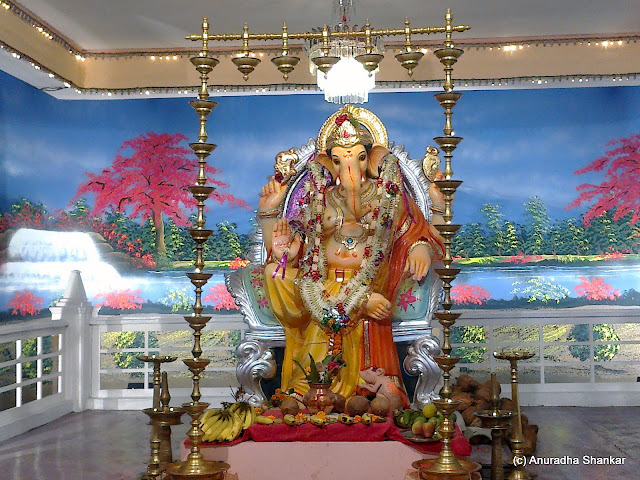 This is a favourite of mine.... Located right next door to R.K.Studios, this pandal always has some interesting set up, usually a local story related to a saint. This year, it is Sant Dynaneshwar. 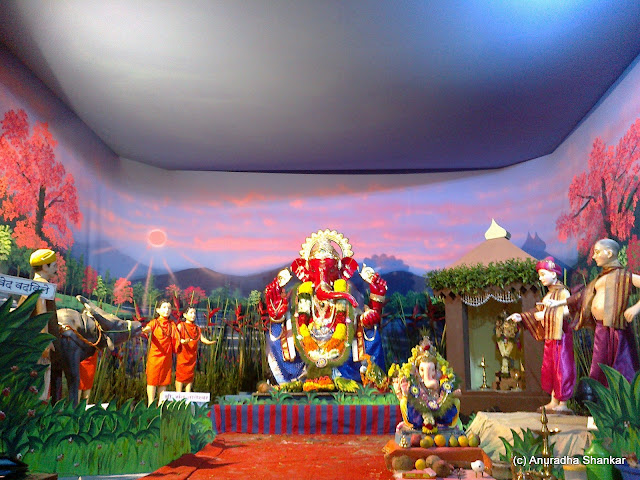 I have been wanting to go and see this one for years now, and it only worked because a friend agreed to come along. Thanks Sita!!! This is the Chemburcha Raja.. 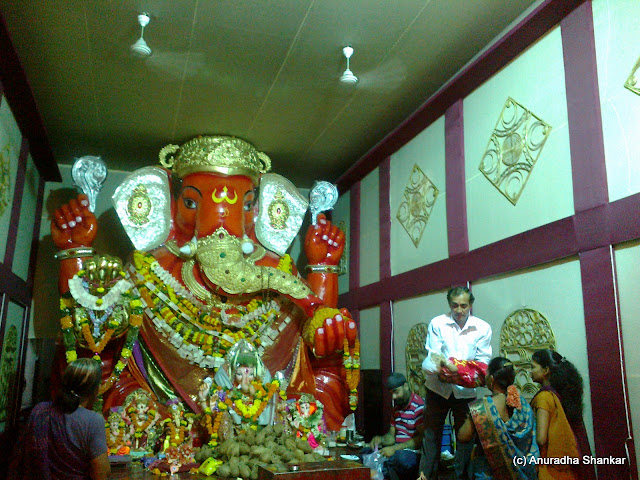 The major theme in Chembur this year seemed to be palaces or temples. This one situated in a tiny lane of shops had a huge temple with Ganesha in the form of Shrinathji, with plenty of figures showing scenes from the life of Lord Krishna... 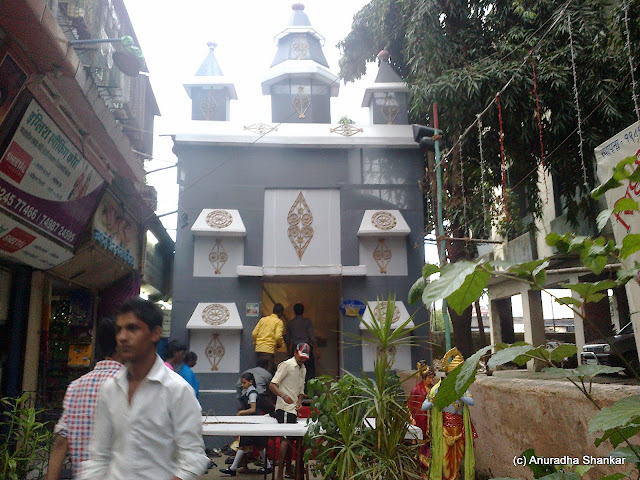 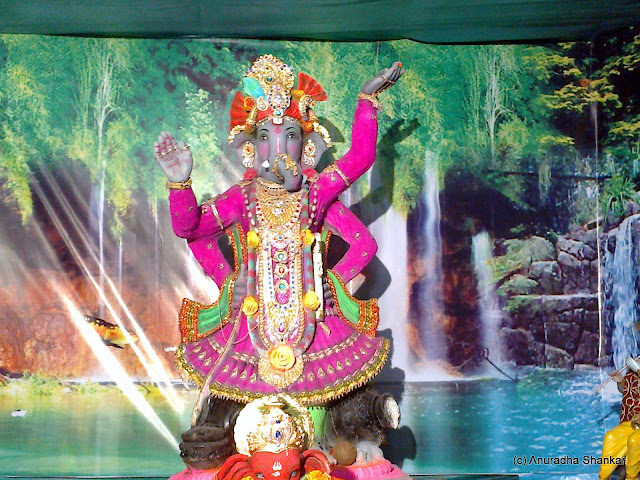 Right opposite was another temple - this one from the south, apparently inspired by the temple at Kanyakumari... 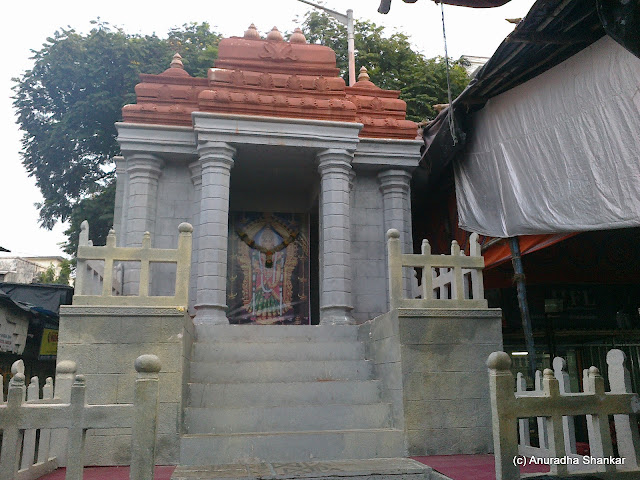 The Ganesha inside had nothing to do with Kanyakumari, though! 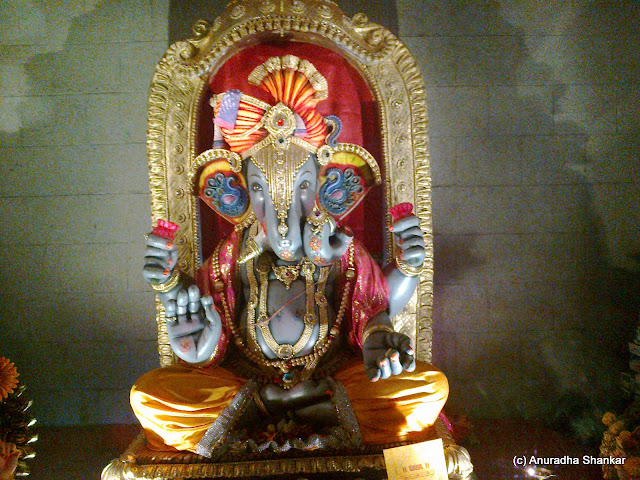 There was another huge palace... a few yards away.... 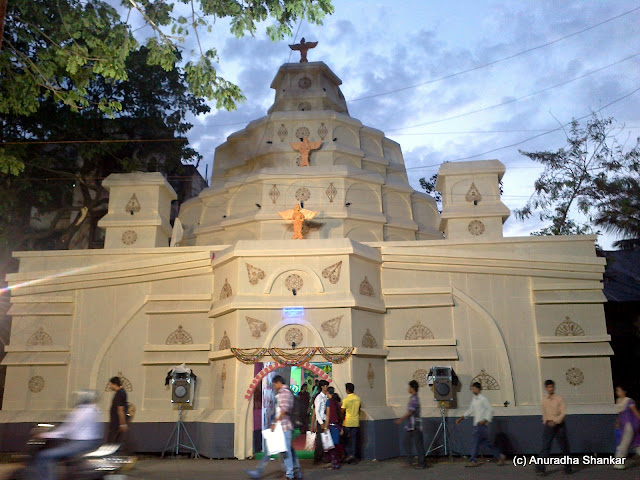 with a royal -looking Ganesha inside! 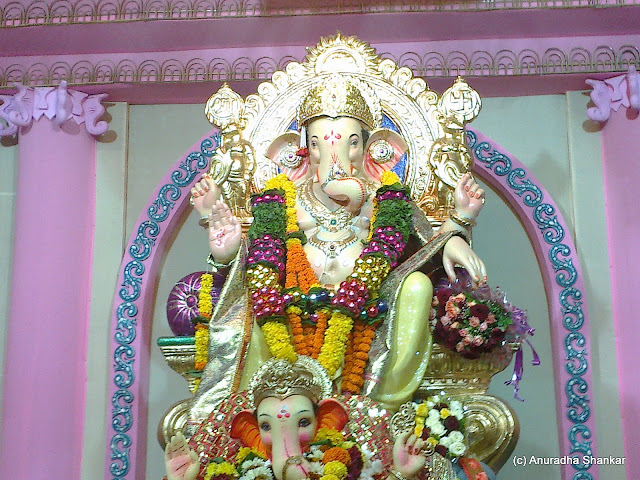 What we loved here was the decoration.. made entirely with shells!! 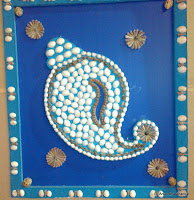 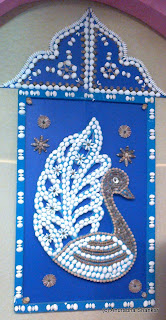 At Chembur station was the one I loved the most.... 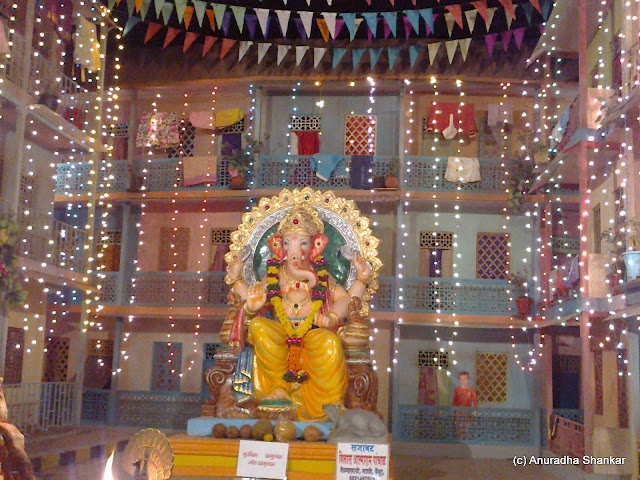 Recreating the chawls of Mumbai, where these Sarvajanik Ganeshas came into existence!

A board at the entrance explained how the concept of Sarvajanik or community celebrations of Ganeshotsavs began in the chawls of Mumbai, and how with popularity and fame, the Ganeshas moved from the chawls to the roads. By recreating the chawls, they are trying to take the Ganesha back to where he came from. Ironically, this pandal is right on the main road leading from the Chembur station!!! 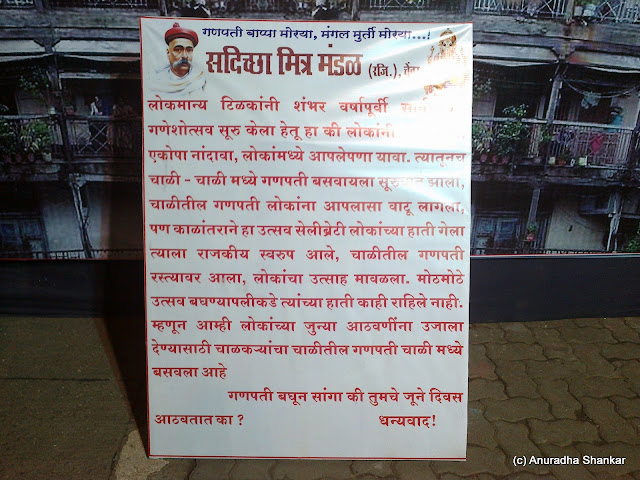 Before I end this post, there is just one more Ganesha to show you - the one in our colony.. The Chedda Nagar Ganpati... 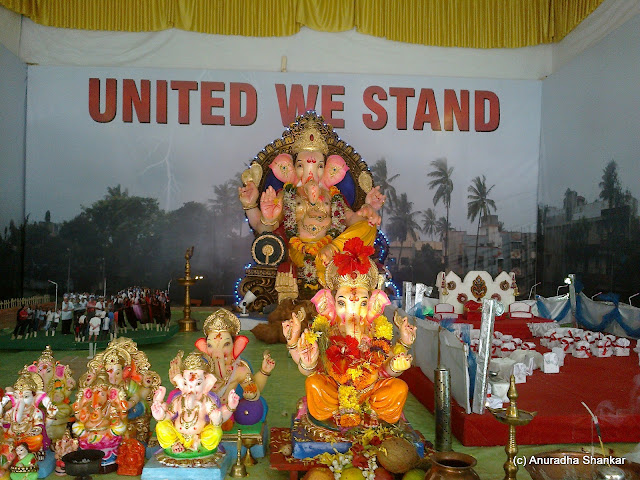 This year the theme is one related to the colony, and the decoration is rather simple. On one side is a pandal set up for a marriage reception and on the other is a group of people standing on a cricket ground. 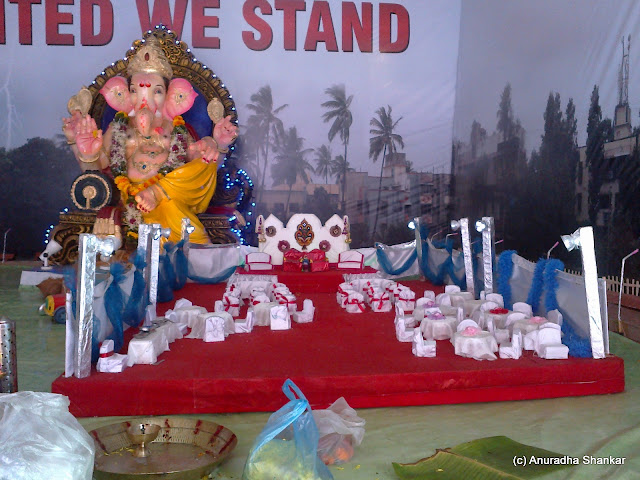 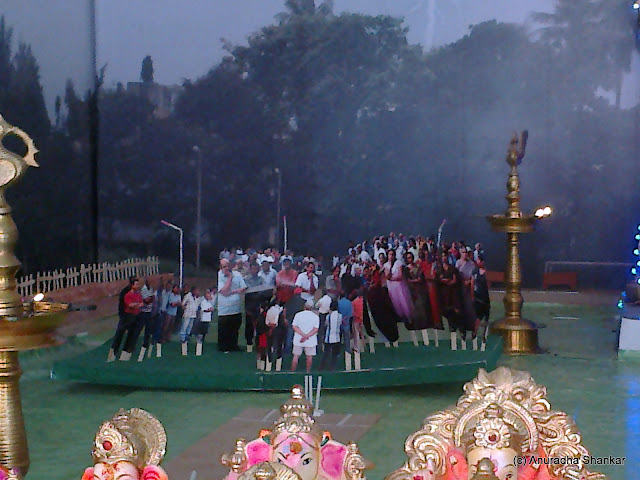 Confused about what it stands for? Here is the explanation - We are among the few areas in Mumbai blessed with a huge ground, and of late, it was being used for a number of commercial activities. Eventually, a few members got together, spoke up against it, and even managed to bring the rampant commercialization to an end. Today, we can enjoy seeing kids playing cricket on the ground, and not be bothered by loud and heavy music!!

P.S. This is a note for any of my readers who might be on the organising committees of various mandals. There is no doubt that the variety of Ganeshas and the decoration in the Pandals are what make this festival special. I have enjoyed Pandal-hopping as a child, and now enjoy taking my son along. However, there are a few things that can be done in such a better manner. such as -