Of Memories and Reality - At the Wagah Border

February 20, 2013
A little girl stood by a gate, staring at the other side. A few minutes earlier, the place had been buzzing with activity, and an aura of importance had hung over the area. Now, it was calm and peaceful, and men who had stared straight ahead without blinking were now smiling and talking with others, completely at ease.

A wide expanse of nothingness followed by a few people on the other side was the scene which stretched out ahead. Behind her was the same, a few people standing around, here for the same reason that she was – curiosity. Only a few men in uniform looked like they belonged here. She stepped forward, intending to touch the gate, but one of the uniformed men held out his hand in a gesture that she obeyed at once, even without thinking. Her mother stepped forward, explaining that she couldn’t move further, since it was a restricted area, and that this was the farthest they were allowed. The soldier smiled at her, and, bending down, told her what she already knew – that the wide expanse ahead was called a No-Man’s-Land, and beyond that was Pakistan – the country we are so close to, yet so distant from. As her mother spoke to him, he said that yes, he did know the names of the guys on the other side. They were the only people he got to speak to, apart from the tourists who ventured to this corner of the country.

That was about 30 years ago, and that little girl was me, visiting the Wagah Border with my mom, aunt and uncle, and that is my only memory from that trip – one of the first trips I actually remember.

Fast forward to the present, and I am at the Wagah Border once again, a mother this time, Samhith in tow. He is almost the same age as I was then, and I wonder what his reaction to the place will be.

The first thing that strikes me is the crowd – the sheer numbers who have gathered here to watch the lowering of the flag! The wide expanse of nothingness is gone, replaced by acres of a modern bus terminal – the only means of getting to a country we share the most with, but know the least about. The border itself has changed. The gate is still there, but it’s no longer just a fence. Around it is now an amphitheatre! At least, that’s how it strikes me!

We hunt for a place to sit, but we are too late.... and we thought that arriving two hours in advance was early enough!!! As my sister in law and son find a perch to see the ceremony from, I choose to let go. This isn’t the place I remember. This isn’t the place I want to be. I had heard of this, but the reality is much worse than hearsay. Remembering all the You Tube videos of the Flag Lowering Ceremony, I decide to skip it, and watch the people instead.

I can’t help but wonder – what is it that brings people here? I came here to remind myself... and show my son... what a border is... a line drawn by man, on a land that belongs to nature. The fields on the two sides of the gate are the same. The people gathered on the other side look just the same. Equidistant from this border are two cities, each of which has an important place in our country’s history. On our side is Amritsar, on the other side is Lahore. How I would love to visit Lahore, a city I have read so much about, but it’s a city closed to me, unless I can give a specific reason for my visit. That is what draws me, and that is what I had hoped to communicate to my son – to try and teach him that the people on the other side weren’t monsters, that they were just like us.

However, I doubt that it’s the border which draws the crowds. It’s the Flag Lowering Ceremony, instead, which is the primary tourist attraction.

The ceremony takes place every evening, at sunset, as the flags are lowered for the day. It is an impressive ceremony, with the flags being accorded full honours, the elaborate military rituals adding to its importance. It was opened to the public as a means of bringing the common man closer to the soldiers of our armed forces. They deserve every bit of the lustful cheering. After all, it is they who guard our country, who make it safe for us to sleep peacefully. 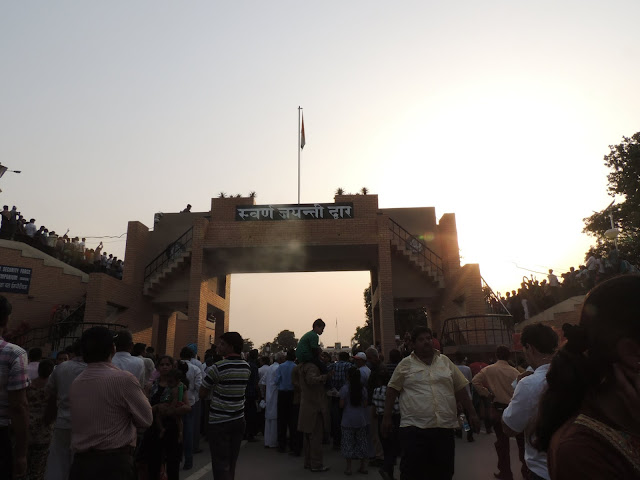 However, like almost everything these days, this too has been commercialised, and today, the border takes on the look of a ‘mela’ or a fair, which, I feel, trivialises the entire thing. People lounging on the lawns because they didn't find space in the amphitheatre, eating, talking, playing.... I wonder why come all the way for this! There is now a food court there, catering to all those who come and grab a seat early in the afternoon, for the programme which starts at sunset. There are toy shops, designed to keep the kids occupied, and then, there is this.... 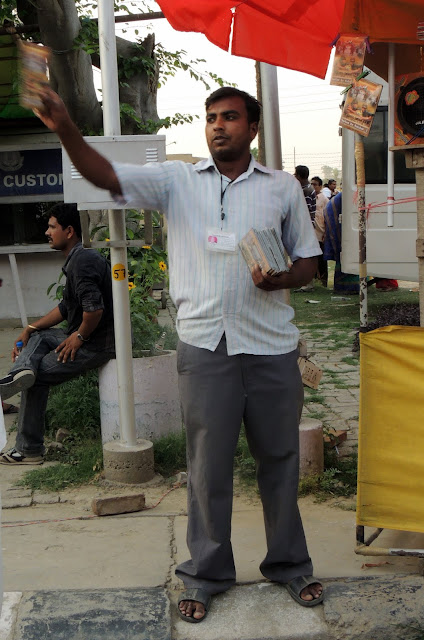 He is probably among the most vocal of the salesmen at the border. What is he selling? CDs of the ceremony, priced at Rs.100.

He is not the only one. There are many of his ilk, and these CDs seem to sell like hot cakes! He even has a small TV set up at his stall constantly screening the ceremony. 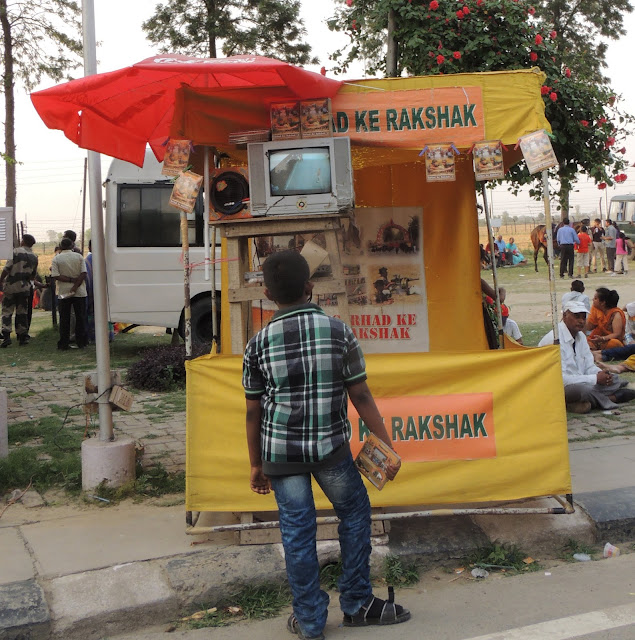 Why would I come all the way to Wagah and then see the ceremony on the TV? And if I can buy the CD, why would I stay on to watch the TV instead of heading straight back? These were the questions I grappled with, as I stood by and watched the constant stream of his customers, and wondered how much he managed to make in a day!

We waited for the ceremony to end, and the crowds to disperse, before heading towards the gates, desperate to remind myself of that day long ago. But things had changed irrevocably since then. Where a soldier had once stretched out an arm to stop me from approaching the gates, there were now barricades, with thousands struggling to get an inch closer, to click a photograph.... to make their own memories. 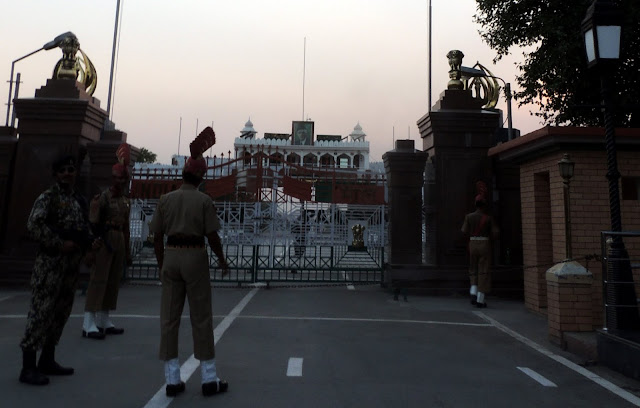 At the age of 38, I sometimes feel middle aged, and wonder often if a mid-life crisis is setting in, but never have I felt as old as I did then, trying to remember the memory of me as that little girl, listening to the soldier at this very same border. I don’t know what Samhith has brought back as his own memory from this trip (as of now, it seems to fluctuate between despair that he couldn’t get a better spot to see the ceremony, and pride that he did see it) but I do know one thing – that it’s probably not a good idea to re-visit places and try to re-live memories!