December 20, 2013
A solitary structure rises over the ruins, and stands out starkly against the unexpectedly blue sky. The monsoon is still on, but the clear skies encourage me to explore. And here I am, at the St. Augustine’s Complex in Old Goa. Once upon a time, this was a sprawling complex, consisting of a church, a chapel, and also a convent, with dining rooms, infirmaries, guest houses et al, all built by the friars of the First Augustinian Order, who arrived in Goa in 1572. 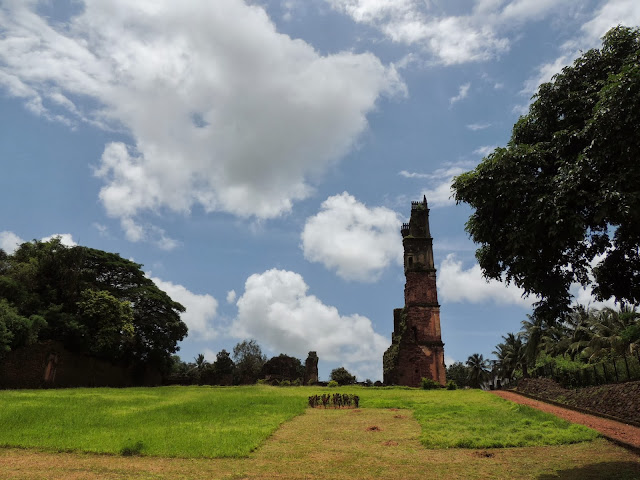 The complex was abandoned in 1835, and the church crumbled over time. Part of it was demolished, and its artefacts were either taken elsewhere or stolen, all over a period of time, leaving just these ruins to remind us of its existence. The tower standing today is the façade of the old church, and was once 5 stories tall. It is only recently that efforts are being made to protect what remains of it, and conserve the ruins. 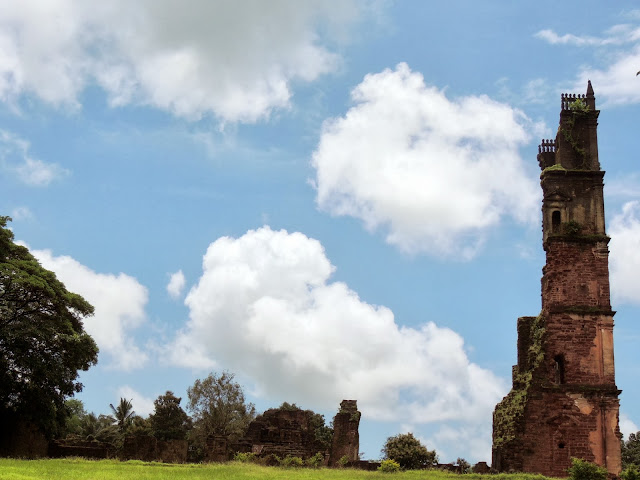 Interestingly, the church is associated with the story of the relics of Ketevan the Martyr. Haven’t heard of her? Not really surprising. She was the queen of Kakheti, a kingdom in eastern Georgia. After her husband’s death, she installed her underage son as the king, and took on the functions of a regent. Sent as an emissary to Iran, she volunteered to be a hostage to prevent Kakheti from being attacked. However, her efforts were futile, and eventually, she was killed at Shiraz, Iran, after prolonged tortures for refusing to give up the Christian faith and convert to Islam. 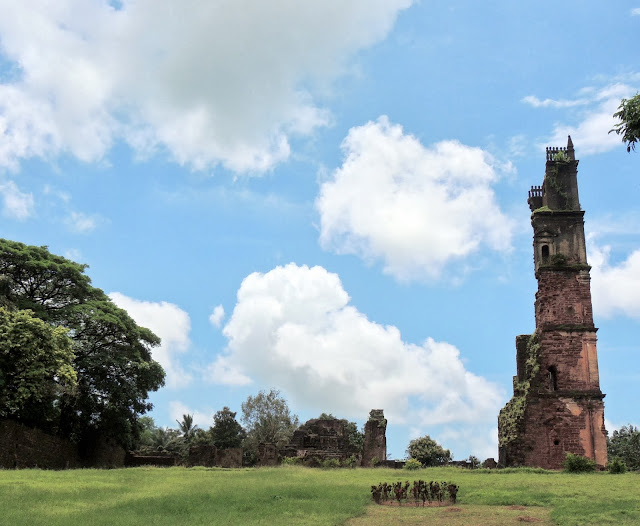 What does all this have to do with Goa? Well, as it happens, she was killed in 1624, and it was the St. Augustine Portuguese Catholic missionaries who brought back her remains to Georgia. However, the friars also brought along some of her remains clandestinely to Goa, where they had already built their church, and interred some of her remains here too. In recent times, there have been several attempts to find these relics, which are of great importance to the people of Georgia, but the St. Augustine Church crumbled soon after Old Goa was abandoned, and no trace was ever found of the relics. There have been regular explorations and attempts by the ASI in association with the Georgian authorities, and so far, all that has been discovered are records that attest that the relics were indeed said to have been placed in the church. However, considering the condition of the ruins, it’s not really surprising that little else has been found!

Standing there, looking up at the tall, crumbling façade towering over the other structures, it is impossible not to think of the story of the queen – her journey from Georgia to Iran, and finally India, and I realise that this is what encourages me to travel – these stories which bring the places alive, through the people who once walked the same path I walk today. It is their journey through life, the choices and decisions they made, which make places as interesting as they are. The architecture and the scene may make the place look picturesque, but it is the story which remains with me, long after I have returned.

This piece was originally published on the Club Mahindra Blog. You can read it here.

Because it is Friday, and because of those blue, blue skies behind the church, I am also linking this post to Skywatch Friday... For more beautiful skies from around the world, visit the Skywatch Page!