Khajuraho - A Break from Temples, and a Tryst with Nature

November 10, 2016
When I set out for Khajuraho with my son, I made a deal with him. He would come with me to temples, and I would take him somewhere where there were no temples around. 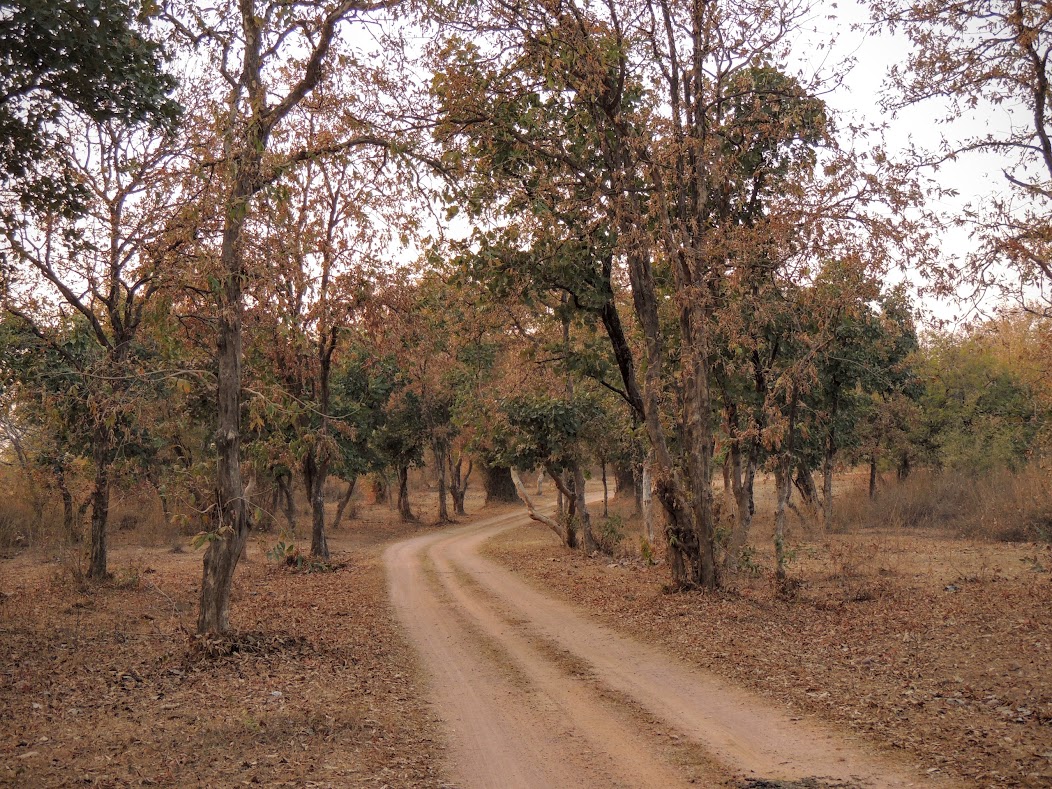 He wanted to see wildlife, and we didn’t have to look too far. Right outside our homestay, was a pond, with plenty of birds to ensure that every single day began with the sight of wildlife!!

Besides, there was the lake behind the Western Group of temples, which attracted a variety of birds apart from the resident ducks!

However, I still owed Samhith a day in the midst of nature, far from temples. Our first choice for his day out at Khajuraho – the Panna National Park – was out of the question, since it was peak tourist period, and safaris were completely booked. However, we did have other options, so we decided to start the day with the Pandav Falls. 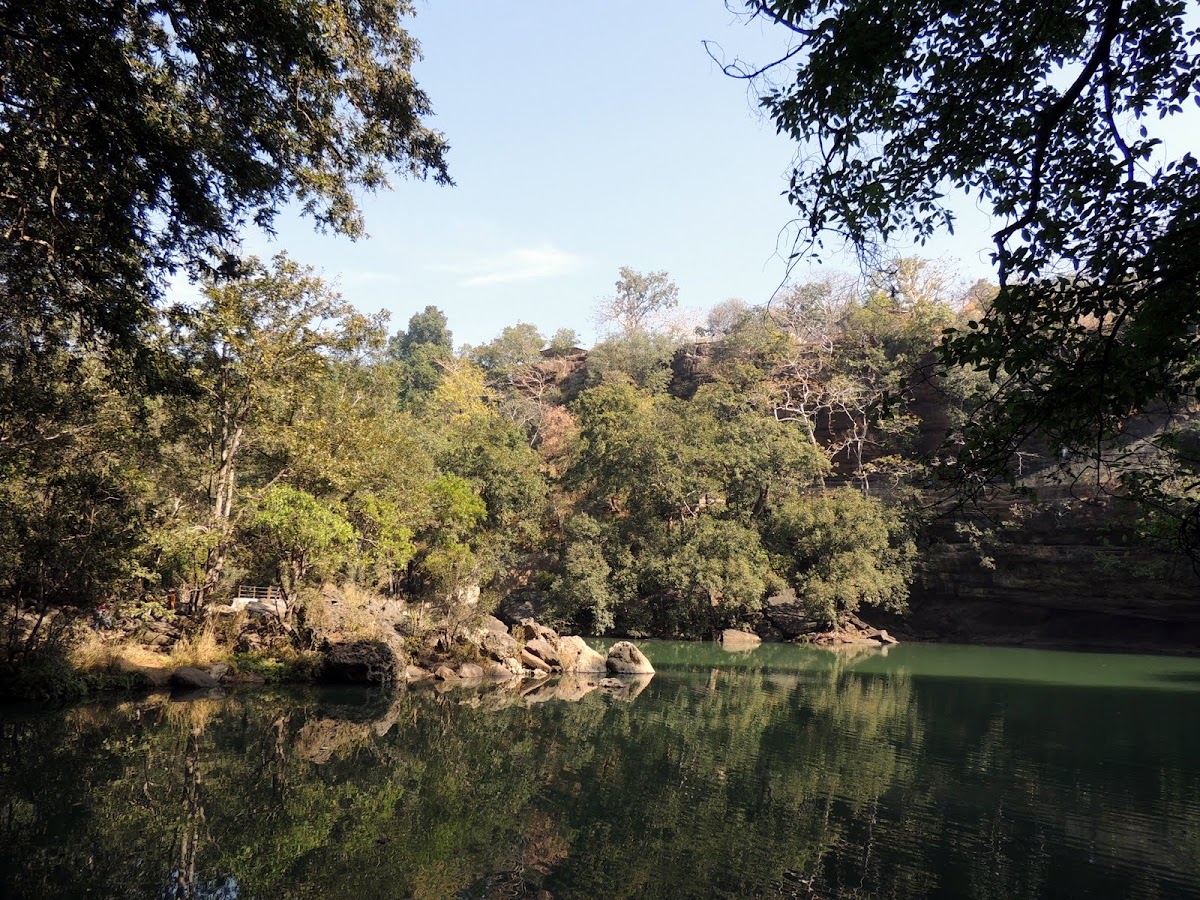 The Pandav Falls are located within the Panna National Park, but can be visited separately. As the name suggests, it is believed that the Pandavas stayed here, near the waterfalls named after them, during their period of exile. Though it was December, there was hardly any water in the falls, so it was a tad disappointing. But the location itself was serene and beautiful, and I could imagine how beautiful it would have been, if the rains had been good! 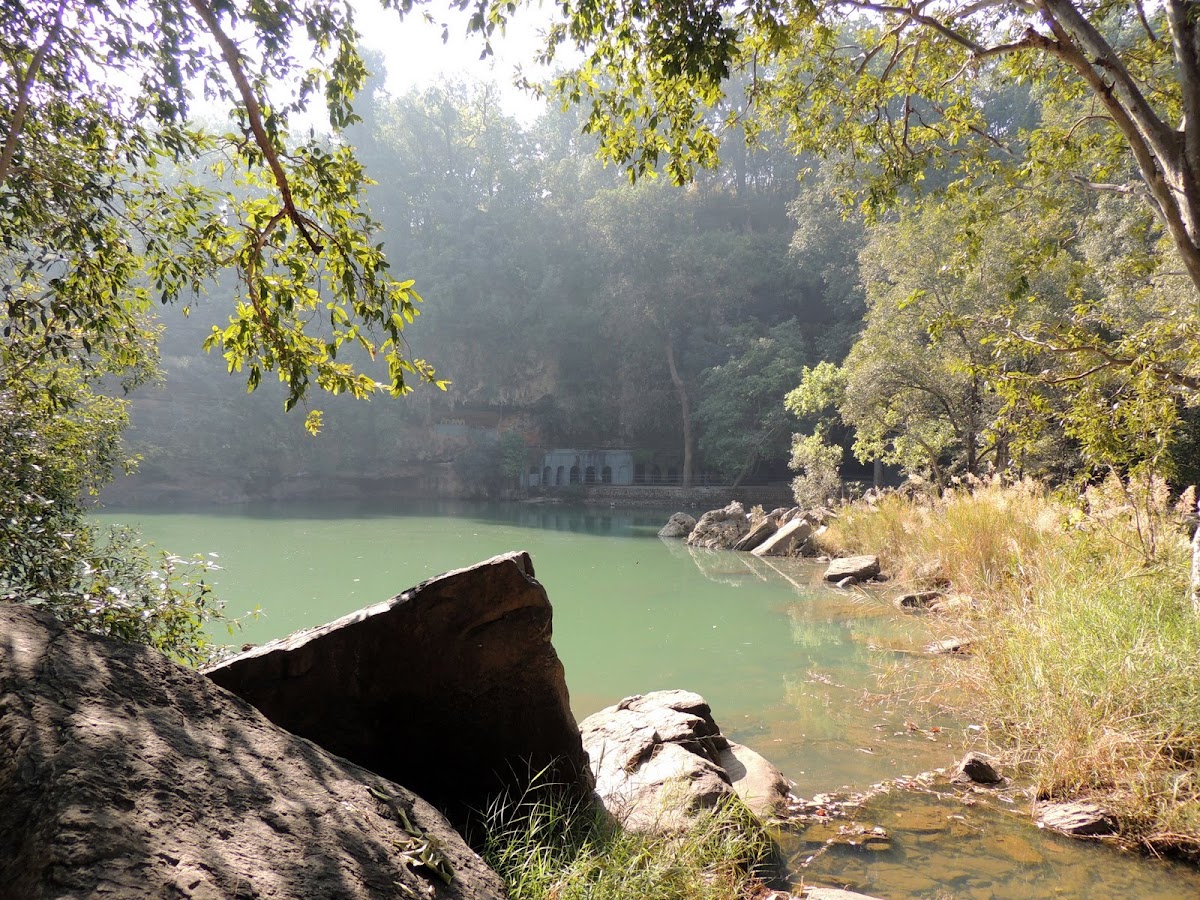 On one side of the falls are some ruined structures, not too old, which appear to have been built by local rulers in the last century. There are small shrines on the upper level, enshrining images of the Pandavas. However, it was slippery up there, so we didn’t take a closer look. 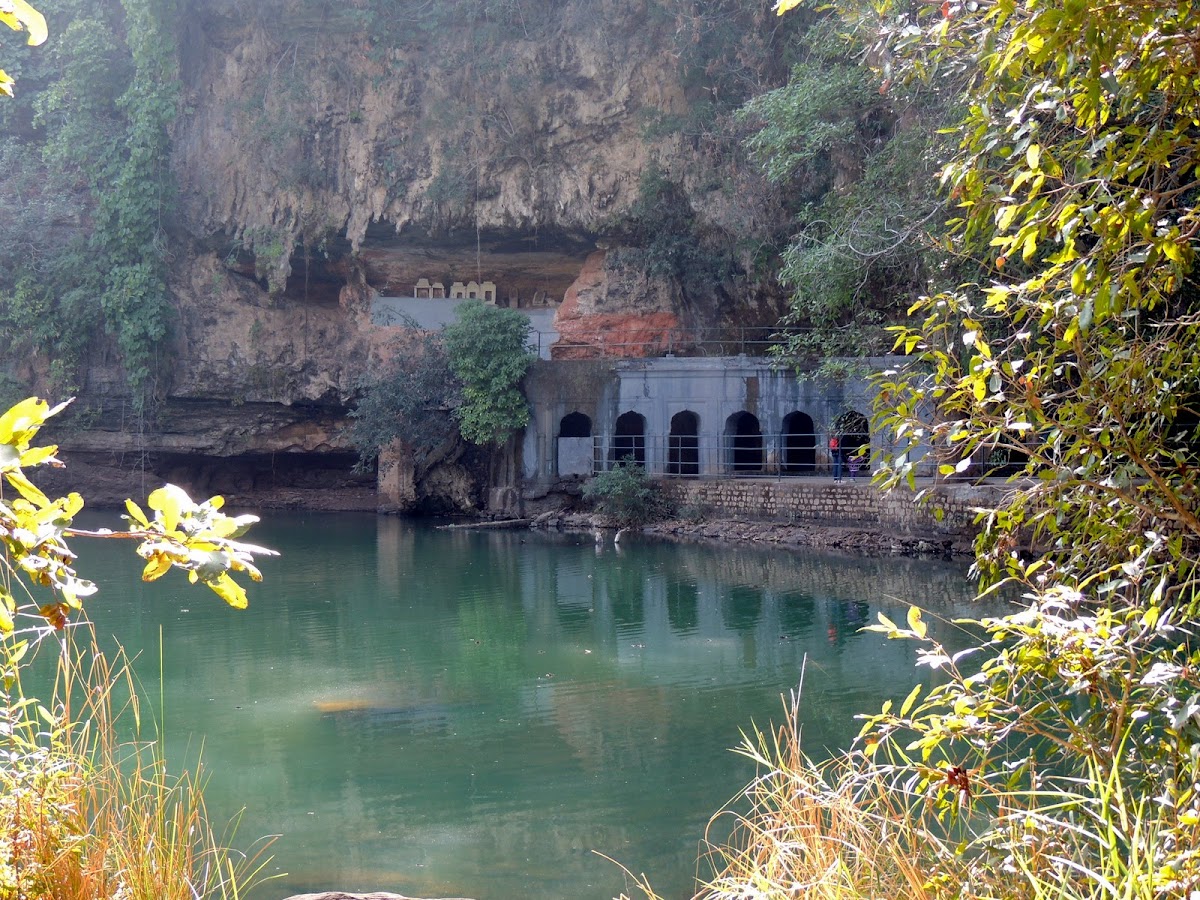 A Grey Wagtail flitted among the rocks, wagging its tail, oblivious to our presence. 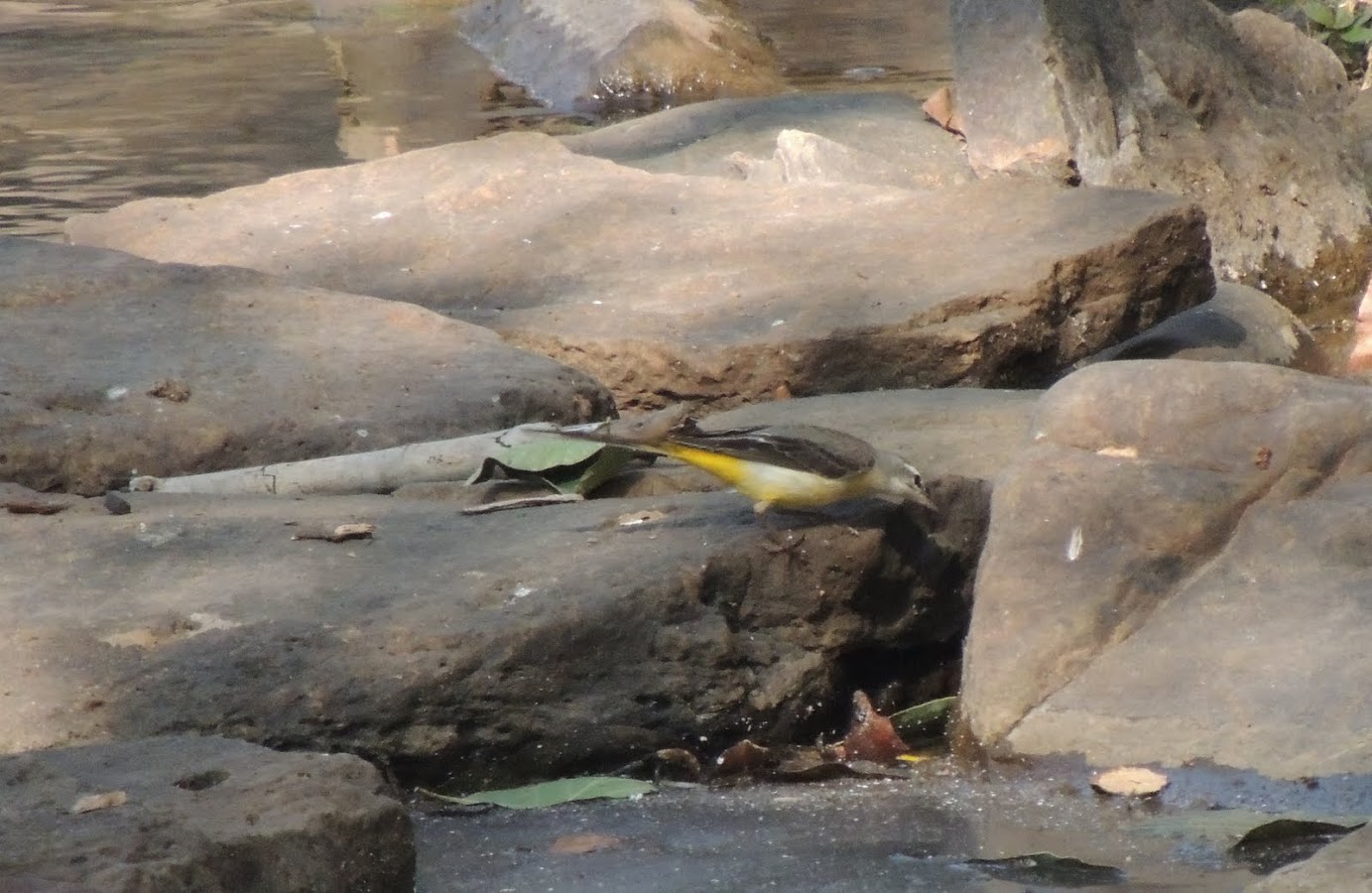 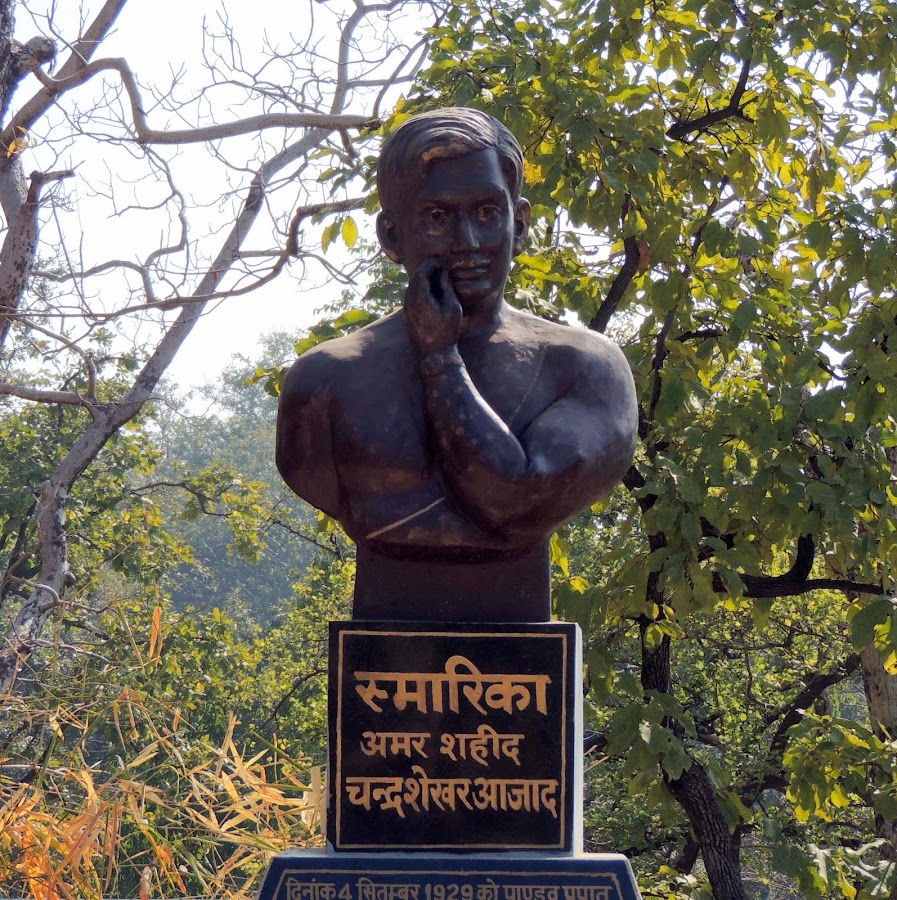 As we drove out, a Nilgai emerged from the bushes, and crossed the road. This was a true spotting of an animal in the wilderness, that too unexpectedly, and our day was made!

Further on, as we took a detour past the Ken River Lodge, we spotted a cormorant basking in the sun.

A White Bellied Drongo perched on a tree nearby….

Ducks frolicked in water bodies nearby... 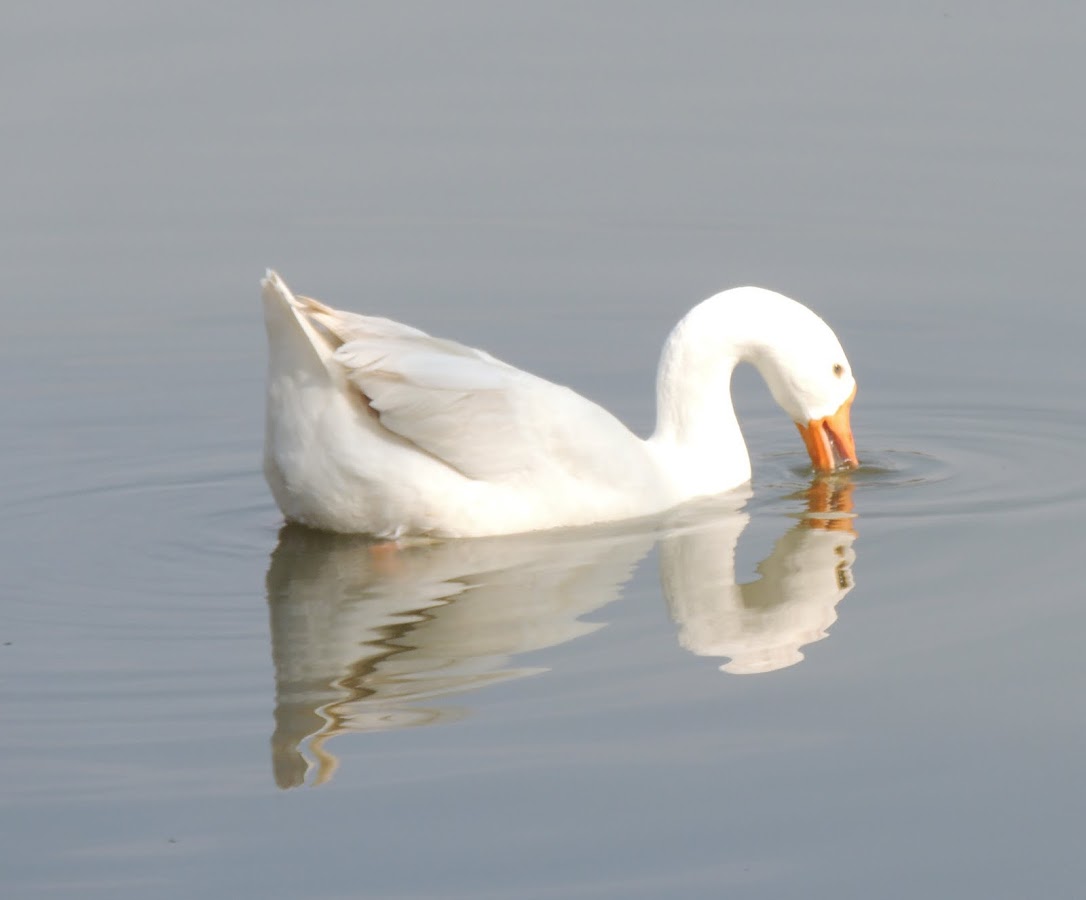 And we  paused to admire the view often, along the riverbank.

We now headed in the opposite direction, towards the Ken Gharial Sanctuary on the other bank of the river. This route was equally scenic…

And we eventually reached our destination… the magnificent Raneh Falls. The only thing was, there was no water here either, due to the poor rainfall. But, unlike at the Pandav Falls, this was a good thing, because we got to see the incredible rock formations which form the canyon of the river!!! 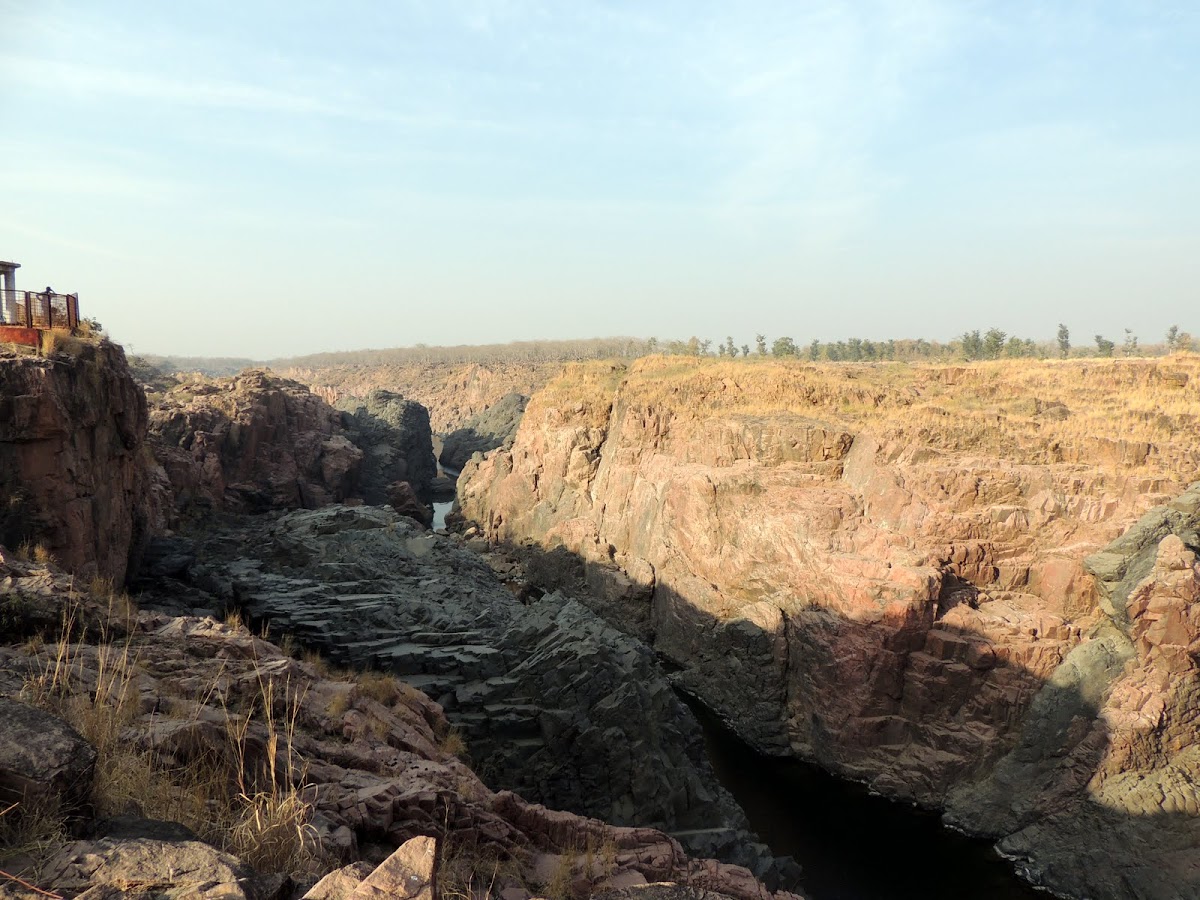 The canyon at the Raneh Falls is known for the pink, brown, red, black and green rocks which are igneous in nature. The canyon is believed to have been created due to volcanic activity in the region. This is the biggest such canyon in the entire region, and it was a fascinating sight! 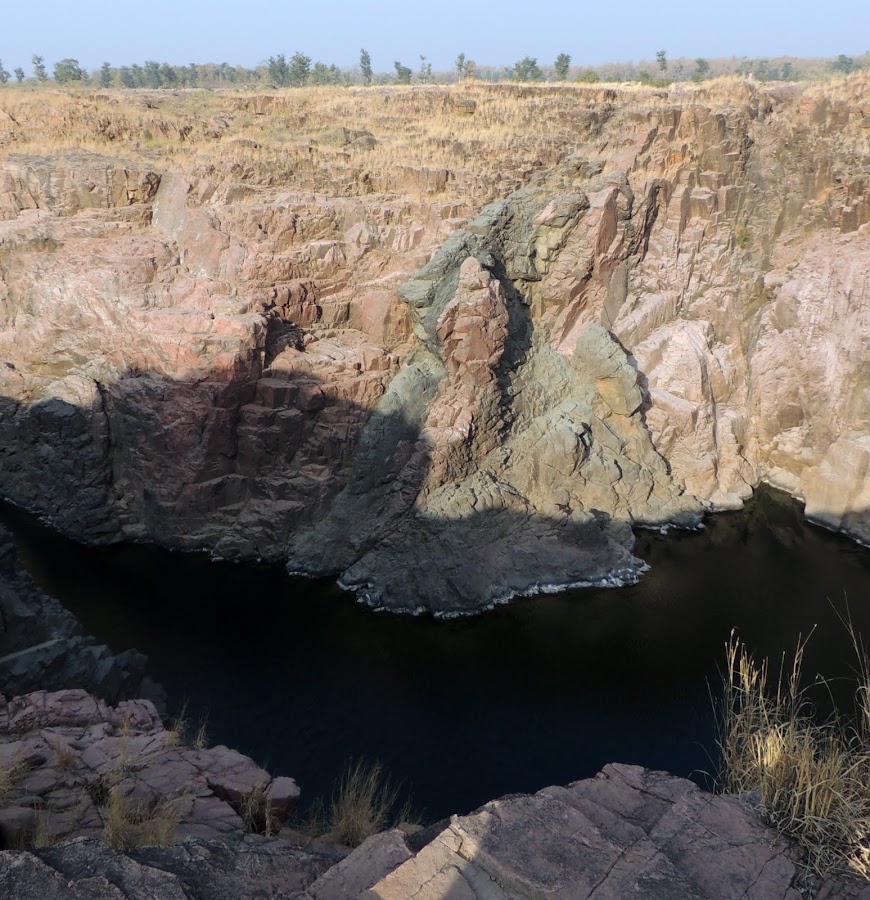 Despite being winter, it was terribly hot, and the rocks seemed to glow incandescently in the afternoon sun. The rocks are of different materials – the black ones are Basalt, the green ones are Dolomite, pink is Pink Granite, brown is quartz, and red is Jasper. 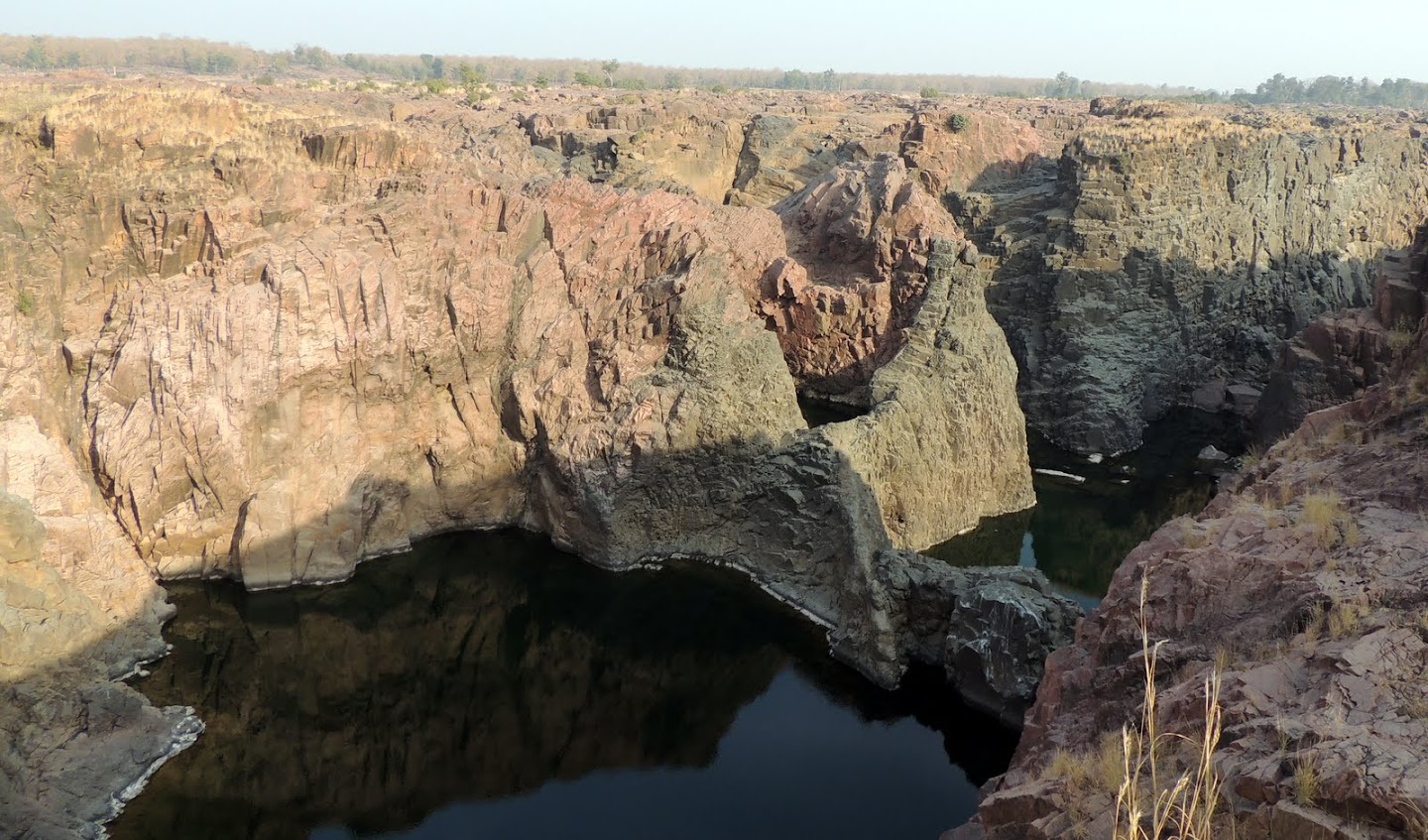 The best thing here is that every visitor is sent towards the falls with a guide, who explains the geological importance of the canyon. Apparently, five types of rock in one canyon is a rarity, and seen in very few sites in the world! While I didn’t retain any more information, if you would like to read more, head to this page for more details. 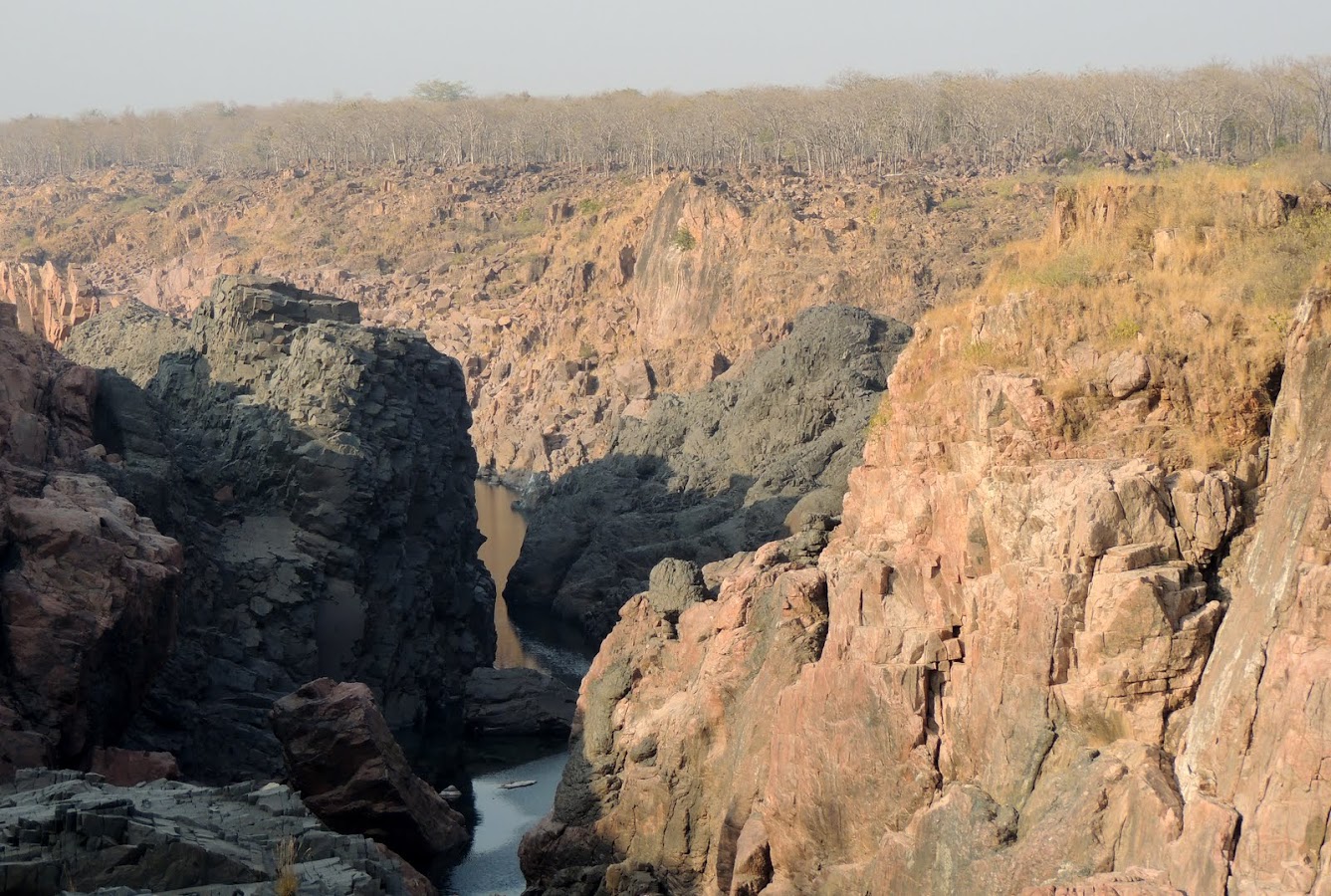 Finally tearing ourselves away from the fascinating sight of the rocks, we headed for a short safari within the reserve, which is part of the Ken Gharial Sanctuary. We didn’t expect to spot much, but did see quite a few deer, Nilgai, Wild Boars, and a variety of birds. 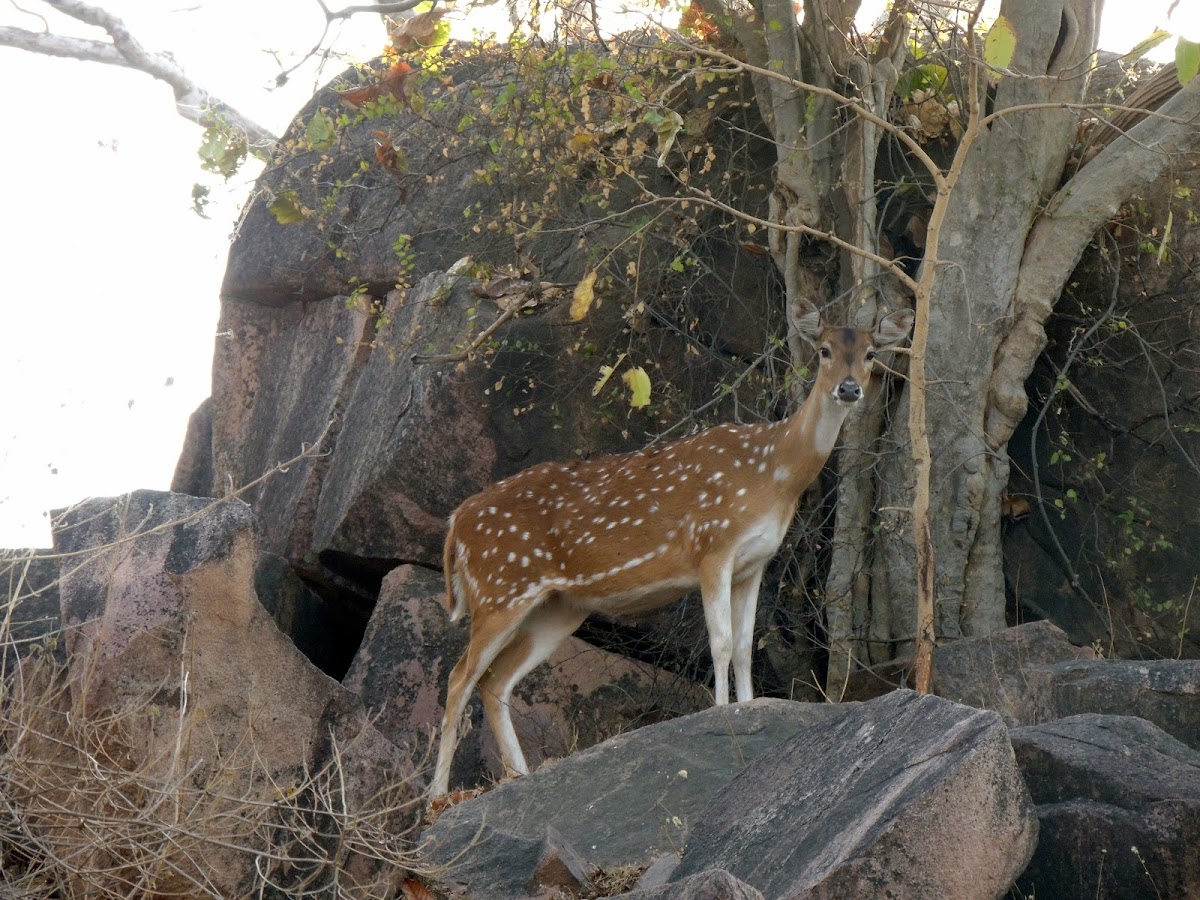 The highlight was spotting a crocodile, far, far, away. This pic was clicked with the maximum zoom in my camera! Sadly, we missed seeing any Gharial, which means we need to visit again!

It was a satisfying end to the day. A day spent in the midst of wildlife. With no temples, as Samhith had insisted!