Encounters with Wildlife on our Ujjain-Omkareshwar-Indore Trip

November 13, 2009
Travelling in an area which has some interesting wildlife sanctuaries, it was one of my greatest regrets that we couldn’t visit a single one on this trip, since it was primarily a pilgrimage to the two Jyotirlingams. However, we are now constantly on the lookout for birds, and make all efforts to photograph as many as possible.

The only wild animals we saw on this trip were monkeys and snakes. While we weren’t able to capture the snake on camera, the monkeys posed obligingly, especially at the Sandipani Ashram, . 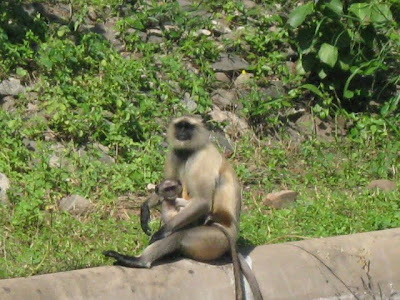 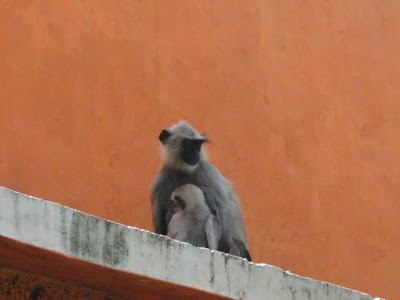 The Sandipani ashram would be an interesting place to visit; for we found some peacock feathers lying near a bush by the path (what was really surprising was that no one had picked them!!). Samhith was all excited, but unfortunately, the peacocks did not make an appearance. Just outside the ashram, though, we chanced upon a flock of birds which we couldn’t identify. The only one among them that I could capture on my camera was the little green bee eater (thanks T&S for your post, which helped me identify this one easily!) 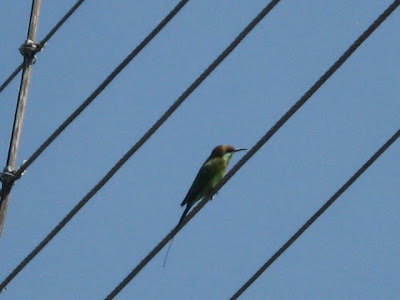 Passing along the roads of as we visited one temple after another, we passed pools of water which had collected due to the recent and unexpected rains. At every single pool were at least a few egrets and cattle egrets. At first, Samhith was so excited, he kept piping up “Amma look, another egret!!!”, but soon he got bored once he realized that there were egrets all over the place. And then, as we passed one more pool, I suddenly realized that the birds there weren’t egrets! We stopped and turned back to the pool where I got down to take pics. The only bird I recognized there was the pond heron (it is seen only in the last pic). I have no idea about the other birds. Can someone help me out, please?

I know this doesn't give a clear view of the bird, but I loved the way its reflection was seen in the water... 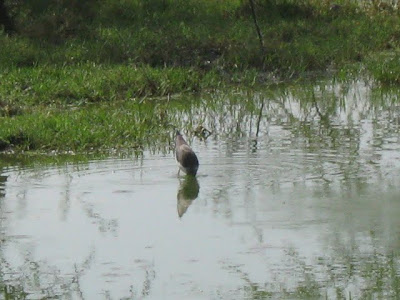 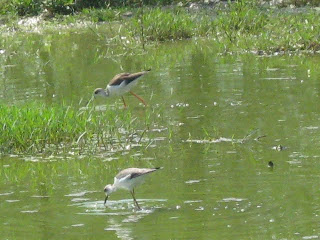 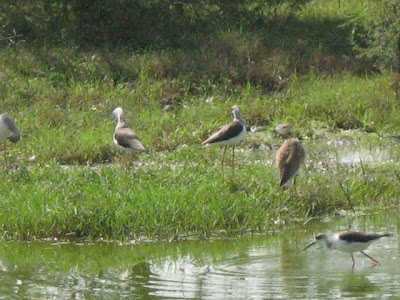 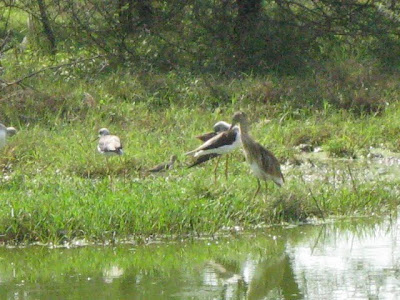 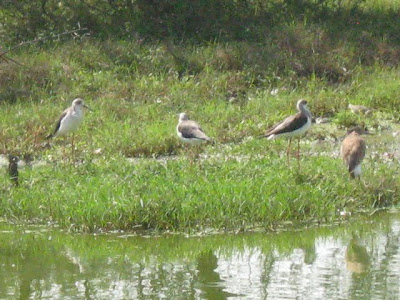 Our next encounter was at the Observatory at where we saw plenty of butterflies, all blue in colour! 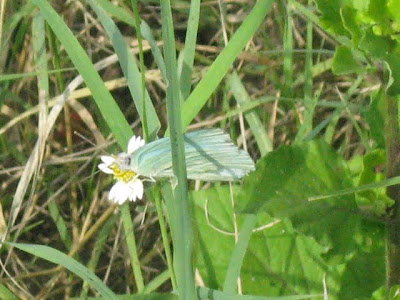 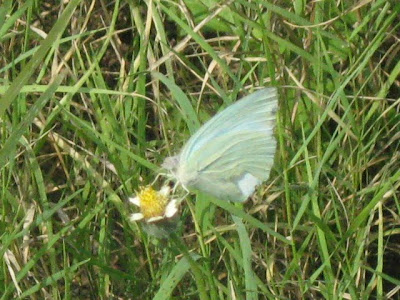 We saw drongoes everywhere, both, black drongoes as well as racket-tails, but this was the only one I managed to capture…. 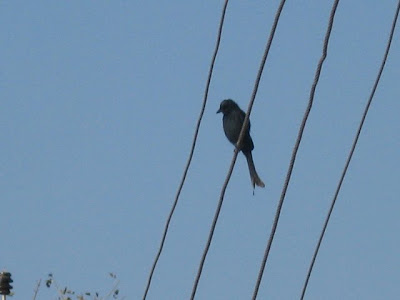 The biggest surprise and the best part of our trip was certainly Omkareshwar, where the first birds we saw were flocks of swifts flying all over the place. When we boarded the boat to cross the river, I noticed the swifts making regular trips to the rock face, and asked the boatman to take us there before going to the ghat. Here is what we saw there…… 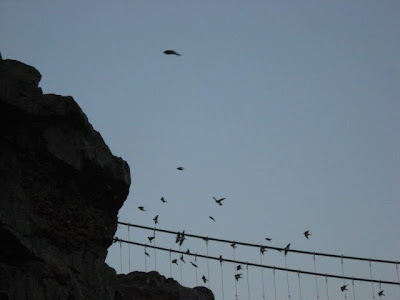 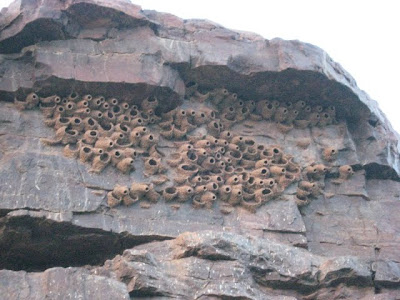 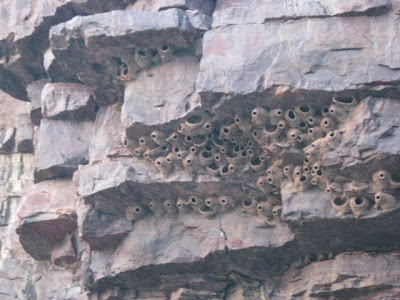 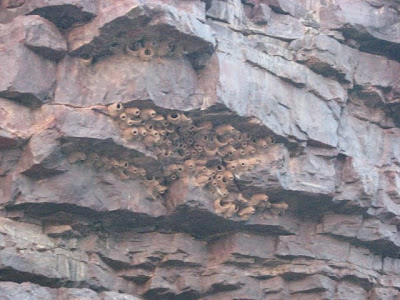 These look like nests of the swifts… and maybe there were swiftlets inside…. Were the birds bringing food to their young??

Our Omkareshwar Parikrama took us along the river and over the mountains, and we again had a lot of opportunity for bird watching, and I wished I had thought of bringing along my binoculars! While again I wasn’t able to identify most of the birds, here are the few I managed to photograph……… 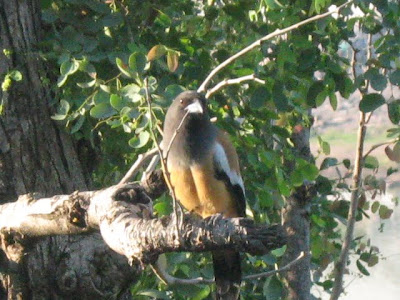 Can anyone help in identifying this one???? 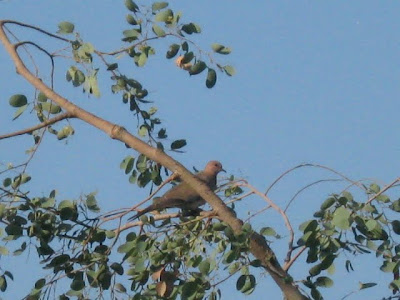 The common myna, on an uncommon perch! and below it there is a coppersmith! 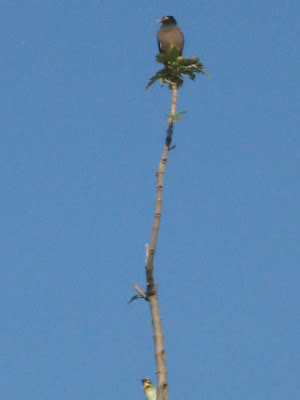 Again, I have no idea which birds these are? can anyone help me out? 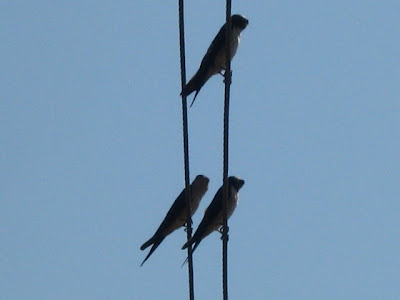 Here is a bird I saw on a tree in the distance... Given my camera's capacity, this is the best I could do..... Both pics are of the same bird. Can anyone take a guess as to which one this is??? 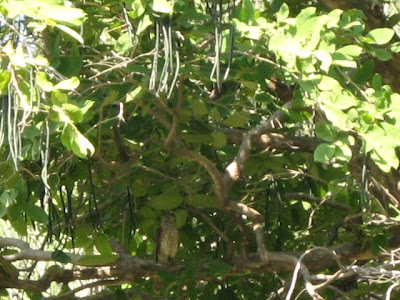 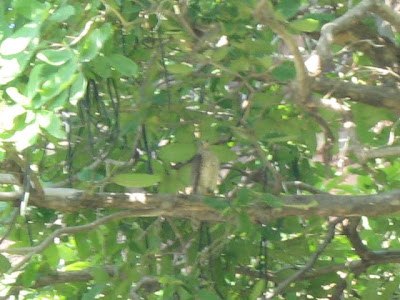 A Langur watched us as we walked the final stretch... 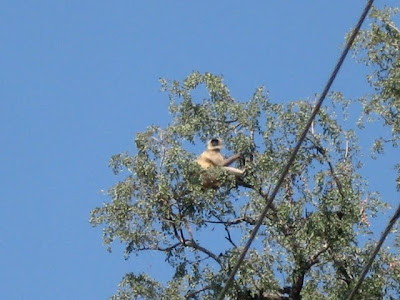 was the only place we did not see any interesting birds…. After all, it is also a commercial city like , and we did not expect to see any, either. But wait, just this week, we saw something interesting from within the confines of our home, but that deserves another post, so wait till then to read about it!