Indore - The city of the Holkars


is the commercial capital of Madhya Pradesh, known for its textile industry. For us, it was simply the station nearest to Omkareshwar, from where we could board our train to . Considering its importance as an industrial city, we expected to find accommodation easily, and it was a great surprise to us that MP tourism did not have a single hotel here! The only hotels available via online or phone booking seemed terribly expensive (about 2500- 3000 per room), so we decided not to pre-book a room, but land there and search for one within our budget. Like most places in India, an auto wallah took us to various hotels until we found Hotel Mayur, which was conveniently located ( 5 minutes drive from the station), clean, and well within our budget (Rs. 650/- for a family room, air-cooled, with 4 beds!).  Though there was no restaurant, they had a kitchen from where we could order food for room service. The food was great, though a little spicy by our standards.

I had a list of places to visit at – temples and palaces, of course. We pondered about hiring a car or doing the rounds in an auto, but finally, it was the hotel manager who offered the best suggestion – hiring a cab! has call taxis, Metro Taxis, which have sightseeing packages. A half-day package consists of 5 hours of travel in and around the city, and costs Rs.500/-. A full day tour costs Rs.800/-. They even have special packages for Omkareshwar, , Mandu and Maheshwar. This, we found, was the most cost-effective way of exploring the city. You can hire a Metro Taxi by calling up their Call Centre at (0731) 4288888. For more details about the service, click here.  .

, at one time, was the capital of the Holkars, and there are plenty of temples and places of historical interest. We, however, were tired after the Omkareshwar Parikrama, and decided to visit just a few of these.

A Jain temple known for its intricate glass inlay work (as its name suggests), the Kaanch Mandir is right in the centre of the city, in the middle of one of the busiest cloth markets of the area. I was looking forward to seeing this beautiful temple, but since it was the Diwali week, some prayers were on, and non-Jains were not allowed inside the temple till the prayers were completed. We left, planning to look in later, but by the time we were through, we were too tired to visit the temple again, and decided to save it for another trip!

The gatekeeper told us that cameras were not allowed inside since it was a place of worship, but when I requested him, he allowed me to take a photo from the road, so here is a glimpse of the beautiful temple for all of you….. 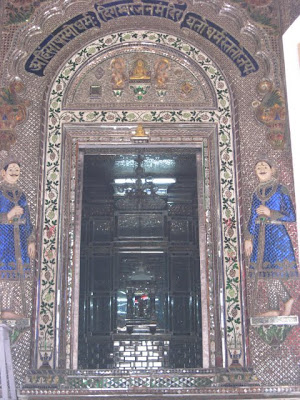 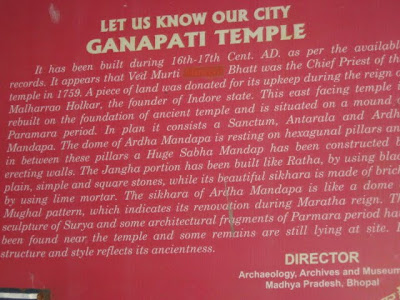 One of the most popular temples in Indore, this temple is credited to Ahilya Bai Holkar, though it is believed that it is located at the site of another, ancient temple. 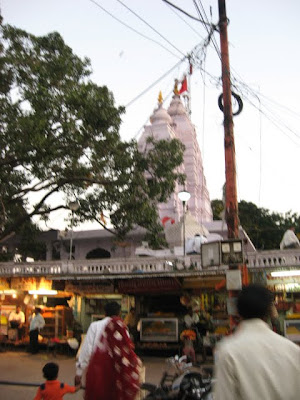 The temple is beautifully decorated, and crowded at most times of the day. The temple complex is huge, with shrines for every imaginable deity, from Ganesha (the main deity here) to Sai Baba of Shirdi (one of the newest additions to the temple). 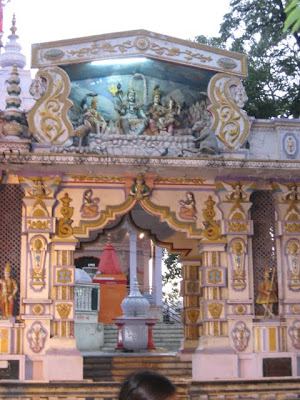 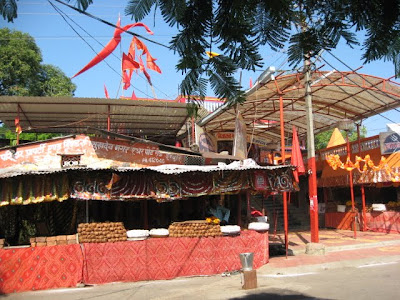 Located on a small hillock, the Bijasen Mata Mandir on Bijasen Tekdi is a shrine dedicated to the nine forms of the Devi – Nava Durga. 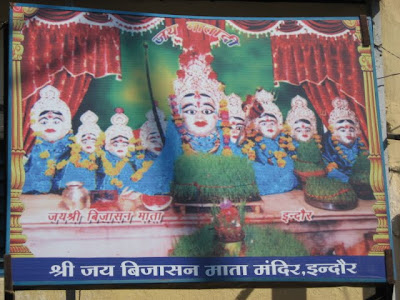 There is a small pond opposite the temple, and the place is a popular picnic spot. 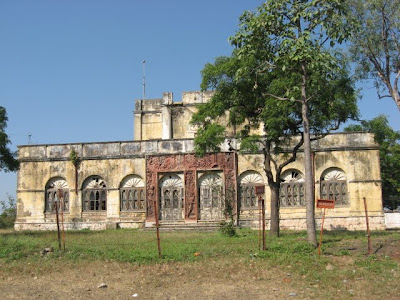 An erstwhile guest house of the Holkars is now a , and that too was closed when we visited. 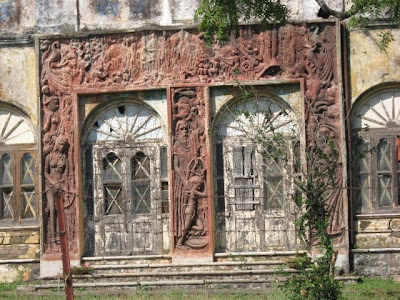 Built in 1875 by a resident of as the result of a dream, the Bada Ganpati temple houses the tallest Ganesha idol in (and probably the world!). the 25 feet tall Ganesha is made of some interesting ingredients: bricks, lime stone, a mixture of Gud (jaggery), methi seeds, soil collected from the seven Moksha puris: Ayodhya, Mathura, Maya (Haridwar), Kashi, Kanchi (Kanchipuram), Avantika (Ujjain), and Dwaraka, mud from stables of horse, elephant and cow, the powder of Pancharatna : heera (diamond), panna (emerald), moti (pearl), manek (ruby) and pukhraj(topaz), and the holy water from all major places of pilgrimage. The metallic frame is of gold, silver, copper, brass and iron. 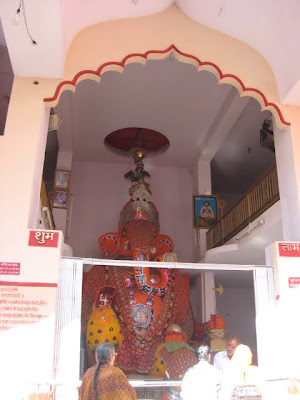 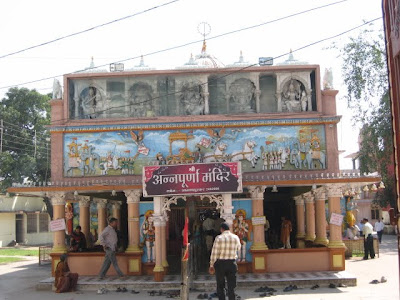 Inspired by the Meenakshi of , the Annapurna temple is built by the math with a South Indian style gopuram. 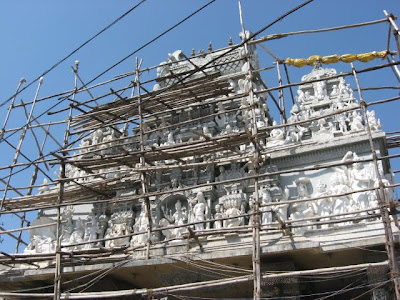 4 elephants support the main doorway, and inside the temple are shrines to other deities, as well as plaster reliefs depicting mythological stories. 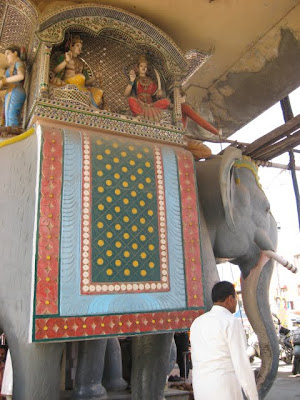 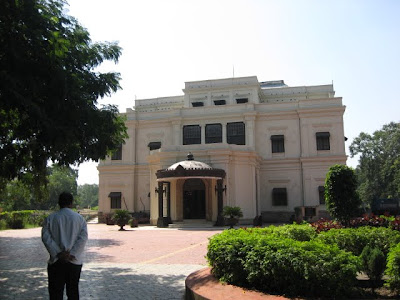 From bedrooms to ball rooms, different dining rooms for Indian and western guests, studies and libraries, the rooms have all been furnished in their own distinctive style, and efforts have been made to give the visitor a glimpse of the royal life. However, the condition of the furniture in some of the rooms is pitiable, considering the grandeur of the palace. Photographs were not allowed inside, so here are a few glimpses of the sprawling acres… 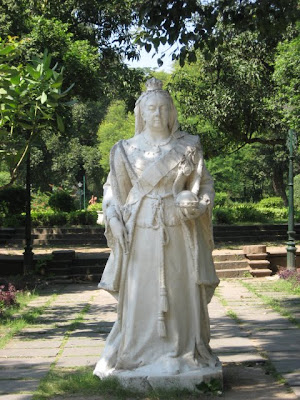 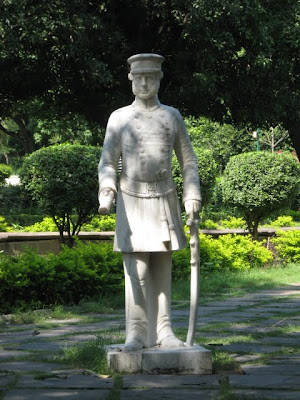 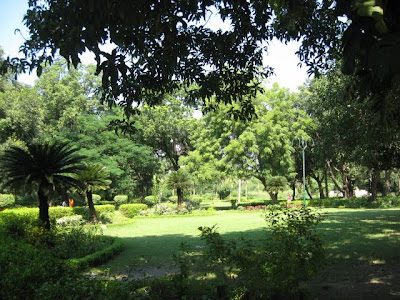 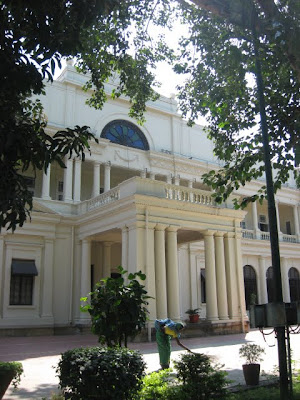 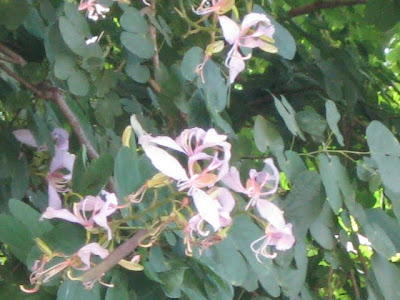 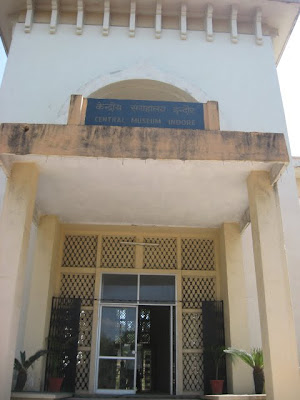 Our final stop was at the central museum, where we expected to quickly go through the collection and rush back to our room for some much needed rest. The museum turned out to be a pleasant surprise, and we spent quite a while there, clicking pictures left right and centre! Paisa vasool for the Rs.25/- I paid as Camera fees! 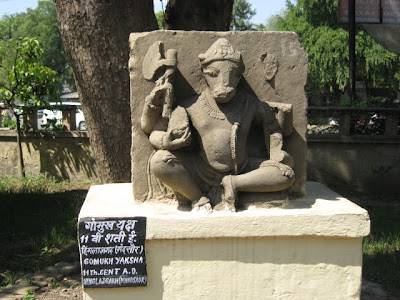 Inside the museum are the usual exhibits of prehistoric men, dinosaurs, fossils, etc. The only thing that caught Samhith’s attention was the display of ancient weapons, especially bows and arrows.  I found the exhibits very interesting, especially since I had no idea that Madhya Pradesh, especially had so many areas of archaeological interest. 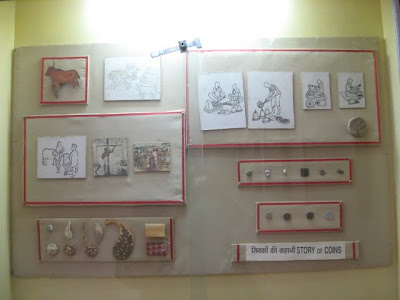 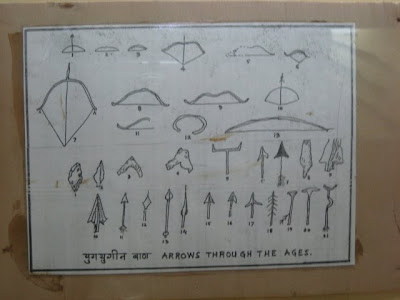 The best part of the museum, however, was its wonderful collection of sculptures found at Hinglajgarh in Mandsaur. The beauty of the sculptures is absolutely astounding, and the sight of broken arms and legs and chipped off faces in some cases actually brought tears to my eyes….. What a pity that we have such wonderful treasures, but we can’t protect them and care for them!!!!

By the time we were through with the museum, we were just too tired to go anywhere else, and headed straight home to get some rest before boarding the train in the afternoon. There are more places to visit, especially the Rajwada, another palace of the Holkars, as well as the Chattris, the royal tombs, both of which deserve another trip!!