November 03, 2009
All roads in seem to lead to the , which is the focal point of the city. Mahakal, as Shiva is known here, is not only the guardian and patron deity of this holy city, he is also regarded as the ruler of this city.

Our car driver regaled us with tales of Vikramaditya, the legendary king of , tales which were more of myths, interspersed with history. One such was the tale of how after Vikramaditya, no king was deemed great enough to rule this city, and the baton was handed over to Mahakal. According to the legend, since then, no human king of the area has ever spent the night in the city, and those who did, did not live to tell the tale. I wonder how much of this story is true, but I must admit that hearing the story from a person who instinctively believes in the story was an interesting experience!

The Mahakaleshwar Mandir has its roots in ancient times, and the legends of the temple are plentiful, and also quite confusing. The most popularly accepted legend is that of the demon Dushana who was killed by Shiva who appeared in the form of light and took the form of a linga in response to the prayers of the people of . Apparently, Kalidasa’s epics give a detailed description of the temple as it was in those days. Of course, the temple was plundered by invaders and was later re-built by other kings. The present temple was built during the reign of Peshwa Bajirao I. 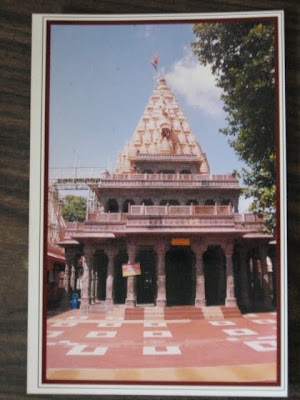 The temple is a three tiered one, with Mahakal at the lowest level, which is actually below the ground. At the middle (ground) level is a temple to Omkareshwar, and over it is a shrine to Nagachandreshwara. This is an interesting shrine which is opened only on Nagapanchami day every year. (To read about another three tiered temple in Tamilnadu, where the uppermost shrine is opened to the public every Friday at midnight, click here  )

The temple is a huge one with a pond at the centre, from which water is drawn for performing abhishek to the lord. All the corridors around the pond, which once were part of the circumambulatory path, are now modified into queues for the pilgrims who arrive for a glimpse of the lord. And yes, it is only a glimpse that you get, and a moment to touch and bow, before you are whisked off by the multitude of pujaris whose sole concern seems to be the making of more and more money from the devout.

The only option for a leisurely darshan is to arrive early for one of the Aartis and stand in the stadium-like area designated for darshan and enjoy a half an hour commune with the lord. After the aarti, people are once more allowed into the sanctum, where one can get a closer look. Any offering to the lord involves a pujari, and he may charge anywhere from Rs.500 to 1000 for the same. 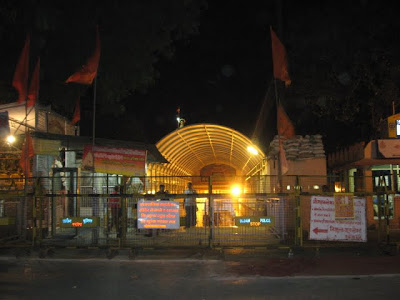 The temple opens in the morning at 4AM with a special aarti – the one of its kind Bhasma Aarti – where the aarti is performed with sacred ash – Bhasma. Since ancient times, this bhasma used to be the fresh and burning hot ash from a funeral pyre, since Lord Shiva is believed to live in and enjoy the atmosphere of a cremation ground. However, now, the temple has changed its ways in keeping with modern times and the aarti is now performed with bhasma made with cow dung, what we call Vibhooti. While those who have seen the original aarti (which was performed till about 15years ago) maintain that it was a different experience which can not be recreated, the present aarti is also a grand experience, something which is worth getting up at 3AM for!! There is no special entrance fee for the aarti, though if you reach the temple before noon the day before, you can register your names for the aarti on the following day, and passes are given at 9PM, which allow you entrance at a VIP gate the next morning. This allows you the privilege of entering first and getting a good seat before the general crowd surges in. Gents wearing silk dhotis are allowed inside the sanctum during the aarti. As I said before, this service is entirely free.

While the temple authorities have made excellent arrangements for attending the Bhasma Aarti, I wish they would make similar arrangements for Abhishek of the lord too. They have a good website with all details, and online puja is possible. They even send you the Prasad. However, if you want to do the abhishek yourself at the temple, you are still at the mercy of the pujaris who grab every chance of making a quick buck! Abhishek is performed every day from 4AM to 5PM, but the temple is open till 11PM.

There are many smaller shrines surrounding the main sanctum, which line the outer corridors of the temple. Some of them are quite ancient and have interesting stories attached to them. There are supposed to be 84 Mahadev (Shiva) shrines in , many of which are within this temple. Of these, the most important are Swapneshwara Mahadev (the one who helps ridding one of nightmares), Chandradityeshwara Mahadev, Trvishtapateshwara Mahadev, Anadikalpeshwara Mahadev, and Vruddhakaleshwara Mahadev (which is considered by some to be the original Jyotirlingam). There are also shrines to other deities such as Ganesha, Hanuman and the navagrahas within the temple grounds.

Cameras, cell phones, and even leather wallets are not allowed inside the temple, so we went and returned empty handed. However, there are some photographers inside the temple who take pics of people against the backdrop of the temple. While we refused to pose for such typical pics, Samhith happened to find a guy with a few parrots, and even managed to inveigle the man into letting the parrots perch on his shoulder. That was one sight we couldn’t miss capturing, and here is a photo to remind us of our visit to the temple. 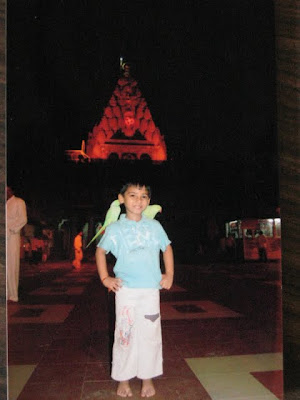