Update on Birds in my neighbourhood.

November 21, 2009
November has been an interesting month so far, bringing with it not just some un-seasonal, but welcome, rainfall, but also a variety of birds. The first indication we had, of the change in weather, was the presence of a small bird hovering over our building. Usha was the first to spot it, and she wondered if it was a swift or just a magpie robin. I very confidently assured her that there were no swifts around, and that she must have just seen a robin flying high up! Imagine my surprise, when, the very next day, I opened my window to see a whole flock of swifts flying round and round over our building! There were at least 25-30 of them! I immediately called her, and both of us rushed to the terrace with binoculars and camera, hoping for at least one good shot! We had ample time to observe the birds, for they stayed there the whole morning, seemingly enjoying the sudden November chill as much as we were. Unfortunately, we were unlucky with the camera, and it was woefully clear to me that I had a long way to go before I could take pictures of these wonderful birds, which zipped past us at such speeds, we were unable to focus on them, much less actually take a snap! Even observing them through the binoculars wasn’t easy, given their speed, but finally, we gave up on the camera, and with some perseverance, managed to get a better glimpse through the lenses.

Here are the only few shots I managed to get…. 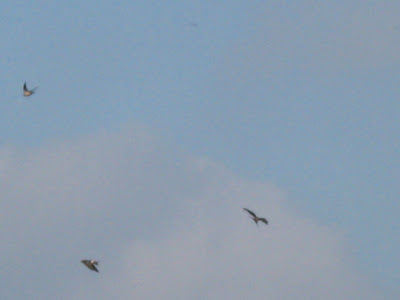 I was so curious about the sighting of these birds, I wrote to the birds group, who helped me out, explaining that the fall in temperature must have forced the birds to fly lower and thus be easily visible, hunting insects which now flew lower thanks to the clouds and stormy weather.

These weren’t the only new winged visitors to our colony. The day after the swifts arrived, I rushed to the window hearing a ruckus and found a group of crows who appeared to be fighting over the food we keep out daily for them. This is a normal affair, something I wouldn’t have bothered about, except for the fact that a few of the crows at the centre of the melee appeared different. I looked on for a while and then noticed that the new ones were jet black in colour and a little bigger than our regular visitors. Could they have been the jungle crows or ravens? Unfortunately, the net on our kitchen window acts as a stumbling block to my photographic aspirations, and I had to settle for mere memories over digital ones……

On the other hand, I have finally managed to photograph one of the many parrots in my neighbourhood. Here’s one eating the little red berries which grow right opposite my window.

I have also managed to capture the many moods of the kite which is roosting on a coconut tree nearby.

Magpie robins have been regular visitors, and it appears they too are building a nest, for we are seeing them frequenting the same branches far more frequently than before… Here are a couple of pics, one where I managed to capture it in flight. 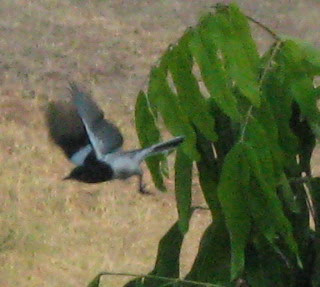 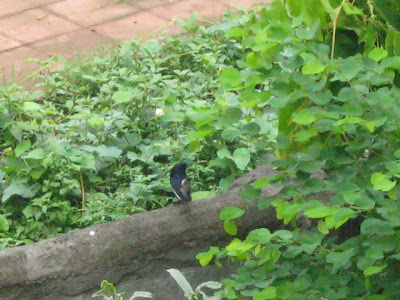 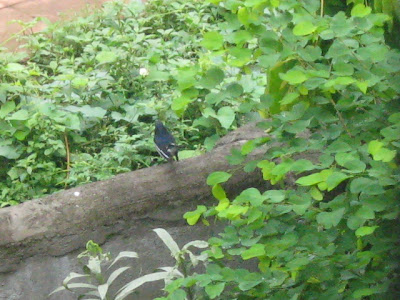 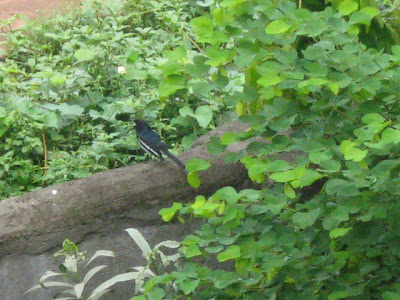