The festival of Navaratri has begun. The nine days and nights celebrating the victory of good over evil are usually filled with events and this is one of the busiest periods for us. Since the last few years, you have seen photos of the Navaratri Bommai Kolu we place in our house. This year, due to bereavement in our family, we cannot perform the festival. Instead, I have decided to post about some of the Devi temples we have visited across the temple. I begin this series with the Kollur Mookambika Temple in Karnataka.

The temple of Mookambika at Kollur is one I have visited a number of times. Set amidst the picturesque Kodachadri hills of the Western Ghats, on the banks of the Sauparnika River, Kollur is today a bustling town, which has grown by leaps and bounds around the temple. 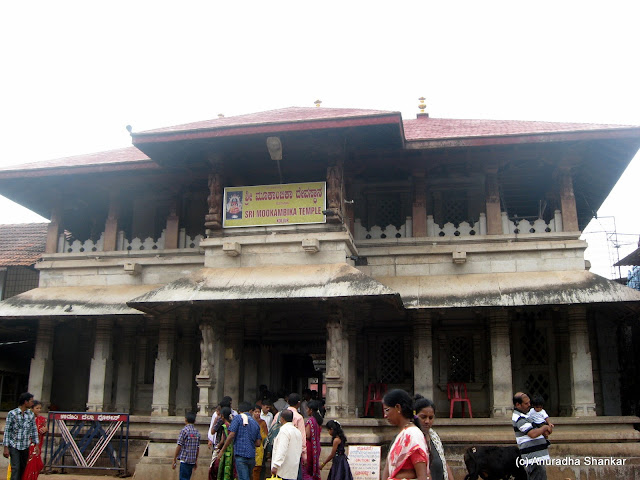 The evergreen hills and the perennial river trace back their history to the days of legends when a sage and a demon meditated at this site side by side. While the sage had no aim but to eventually achieve oneness with the Lord, the demon obviously had power and invincibility on his mind. Which is why, when the time came for the Lord to grant their boons, the goddess of speech made the demon a mute. Thus foiled from his aims, the demon came to be known as Mookasura – the demon who was mute. Of course, being a demon, he turned to troubling the sage and disturbing his penance. The sage invoked the help of the Goddess, who obliged. She appeared on this site with all the other Gods and vanquished the demons. On the sage’s request, she agreed to remain here, and came to be known as Mookambika – the vanquisher of the demon Mooka. 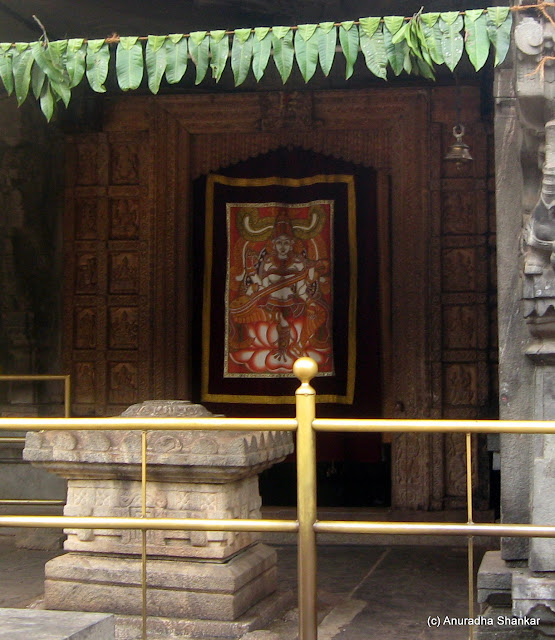 The first temple here is said to have been built by Parasurama, but the most recent legend relates to Adi Shankara. It is said that Adi Shankara, after setting up his ashram at Sringeri, wished to build a temple to the goddess in his hometown – at Kalady in  Kerala. The goddess appeared to him on these hills, and she agreed to go with him. However, she had a condition. He was to lead her, with complete confidence, without looking back to make sure she was following. Under this condition, she was ready to go wherever he wished. However, if he looked back even once, she would stop, and stay there forever. Adi Shankara agreed, and they set out over the hills that would eventually lead them to Kerala. The sound of the goddess’ anklets were enough to assure Adi Shankara that she was indeed following him. However, as they walked along the Sauparnika, the soft sand on the banks of the river deadened the sound of the anklets, and for the first time, Adi Shankara felt a twinge of doubt. He turned back, and there she was, right behind him, but turned to stone. And that is where she is said to still stand today! The present temple itself is said to be around 1200 years old. 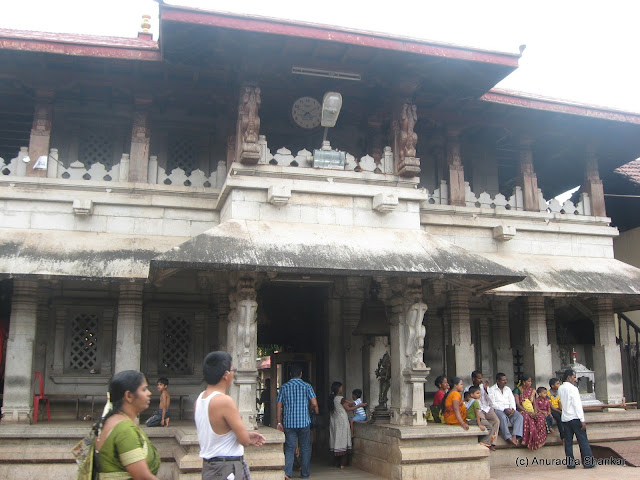 The fame and importance of this temple comes from the multifaceted goddess. She is not just Parvati or Shakti, who annihilated the demon. She is also Lakshmi, who blesses her devotees with wealth and prosperity. She is also Saraswati, who bestows the gift of learning. She is an amalgamation of all these, because it is the combined power of strength, confidence and wisdom which brought about the end of the demon. She is also seen here as a lingam – the form of Shiva – probably because she first appeared here with her consort, who was ready to grant the demon a boon. But it is this form she chose to leave behind as a reminder of her presence. 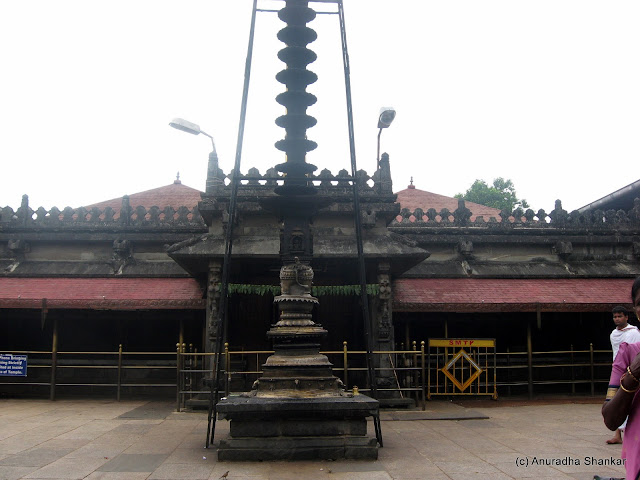 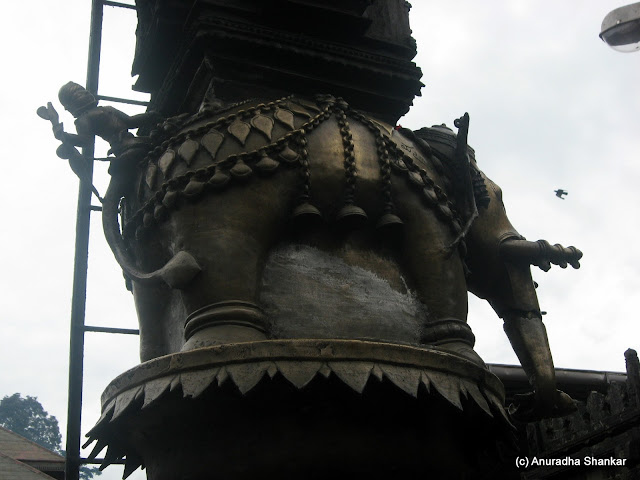 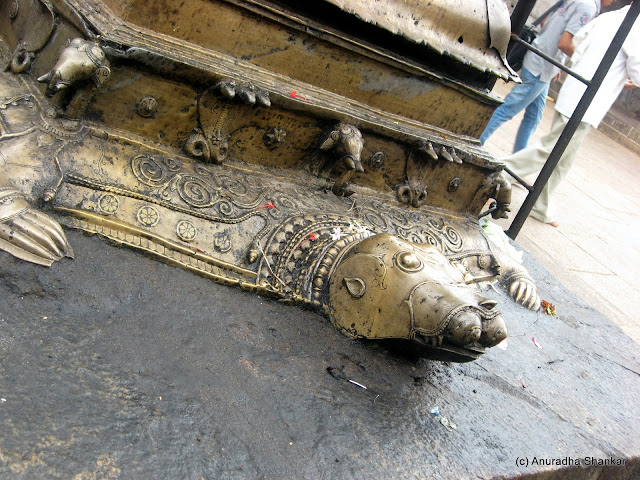 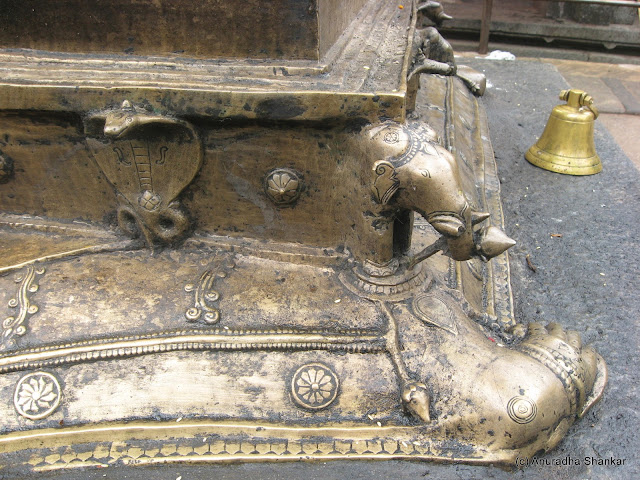 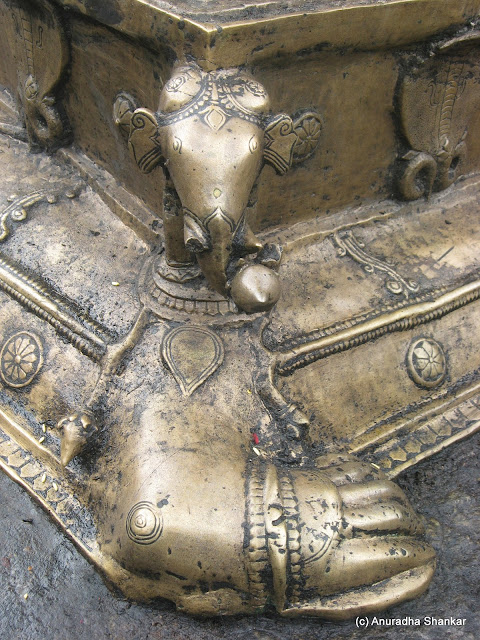 This is just the Dhwajasthambam, which stands just outside the main sanctum – but it makes me wish I could take a camera inside and click away!

Factfile:
The nearest city is Mangalore, which is 140 Km away. Udupi is 80 Km away.

By Train: Mangalore and Udupi are well connected by trains to all parts of India. Kundapura and Baindur Railway stations are the ones nearest to Kolur. Baindur Railway Station, which falls on the Mumbai – Mangalore route, has now been renamed ‘Mookambika Road’.

By Air: The nearest airport is the Mangalore Airport, located 120 Km from Kollur.

By Bus: Luxury Buses plying on the Mumbai – Mangalore route stop at Kundapura, which is the nearest town. Besides, there are plenty of regular buses to Kollur from Udupi, Mangalore, Sringeri, and Shimoga.

Where to Stay: Kollur is a town which revolves around the temple. There are plenty of hotels / lodges/ guest houses/ dharamshalas / dormitories available for every budget. The accommodation built by the temple trust is also very good. There are also homestays around Kollur, but a bit farther away.

What to do: The temple is the main attraction for visitors to Kollur. However, once you have visited the temple, you can spend some time visiting some other interesting places around... such as the Marana Katte, which is where the Goddess is said to have slain the demon. This is a 3 hour one way journey by jeep, so this is something I have never had time for. However, considering that it is located in the midst of the jungle, it must be worth a visit.

Also, for nature lovers, the Aanejhari Butterfly camp 5 Km from the temple sounds to be an interesting place!