October 30, 2012
In October 2011, we visited Sringeri, Udupi and Kollur. It was a memorable trip with tightropeartists and rainbows giving us a respite from the temple visits. We were really looking forward to the last leg of our trip, which took us to Shimoga and then to the River Tern Lodge. However, we still had much to experience before we reached Shimoga!

We had decided to use public transport as much as possible during the trip, so we stuck to KSRTC and private buses which ran on the hills. We had no problem finding convenient buses, and to my surprise, almost always managed to find seats too. The people were helpful, and with a mixture of Tamil and Hindi, we managed to travel from one place to another with the least amount of trouble. The people at the bus stands, as well as the driver and conductor were polite and helpful, and nowhere was it more apparent than on the last part of our journey, from Sringeri to Shimoga.

After the heavy rain of the night, we had been wondering what the weather would be like the next morning. We had loads of luggage, and had to reach Shimoga, and then head on to the JLR’s River Tern Lodge. However, the sun rose bright and early, and the sky was clear. It seemed to bode well for us.

Finding a bus to Shimoga turned out to be easier than we thought. We found ourselves seats and the bus started off with great gusto, only to stop in a while in a tiny lane just off the road, near a small village. The bus had developed some trouble, but not to worry, said the driver. A replacement bus was already on its way. And there it was, right behind. Impressed, we gathered our luggage and rushed to catch seats before the rest of our fellow passengers. However, it seemed we had lost our ‘seat catching’ skills, for all we managed were the seats next to the driver!

The driver was all set to leave before we were, and off he rushed, to make up the few minutes he had lost. It was barely ten minutes later that we realised that one of our bags was missing! It was left behind on the earlier bus! I was a bit upset, and despaired of ever finding it, and we wondered what to do. The driver overheard our conversation and asked us what had happened. When we told him, he simply called up the driver of the other bus and asked him if our bag was there. It seemed it was... it had fallen off while we were boarding...and he made arrangements for the bag to arrive at Shimoga by the next bus!! I was stunned, to say the least, and still wondered if it would indeed reach us within half an hour of our arrival at Shimoga.

Having little else to do, we spent the rest of the journey admiring the views of the verdant countryside... and hoped we would eventually get back our bag.... 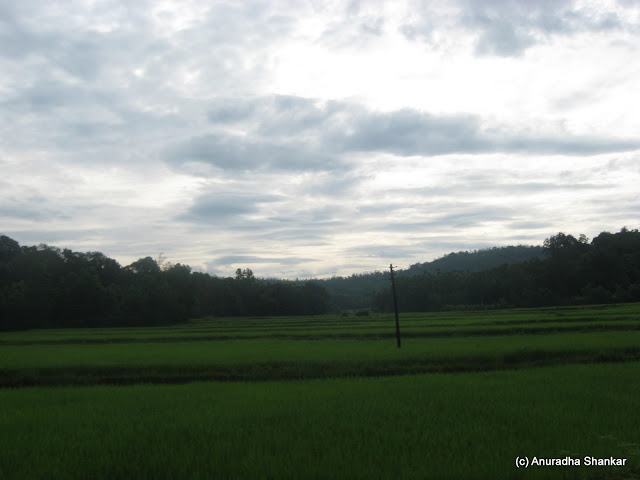 Meanwhile. Samhith decided to make the most of a tiny space behind the driver... 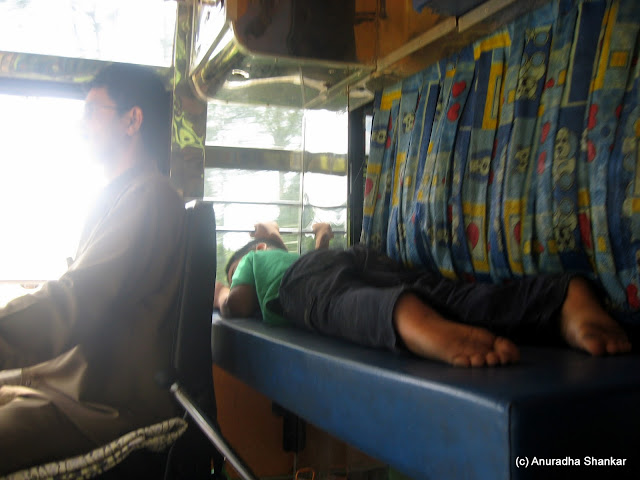 While the driver chatted with us about our next stop – the River Tern Lodge. He told us the bus timings to the place, and also how to get there soonest!

At last, it was time for us to alight at Shimoga... and we wondered when our bag would reach, if ever! The driver assured us that the bag was on the next bus, which would arrive within half an hour. “Our buses are never late” he said, and gave us the number of the conductor of the other bus, “just in case”. We thanked him and made our way to the waiting area, wondering how we would identify the right bus among the constant flow of buses, which all appeared the same to our undiscerning eyes. Exactly half an hour later, a bus roared in, and as the crowd poured out of the bus, the conductor got off, our bag in his hand. Shankar was trying to call the number we had been given, but the conductor spotted us at once – apparently, jeans and kurtas aren’t a common dress in those parts, and the driver had described the one Shankar was wearing! And thus we were reunited with our missing bag! We couldn't thank the drivers and conductors enough, but for them it was just another day.. they had buses to drive and time tables to stick too, and off they went.

We went on our way too... to the River Tern Lodge, where we spent two amazing days! That experience deserves not one, but numerous posts, so thats what is coming up next!!