One of the Golus we look forward to seeing every year is the one at an uncle's place in Garodia Nagar, Ghatkopar. A retired engineer, we admire him for his patience and attention for detail which make his golu among the best we have ever seen.

Before we take a look at his amazing creations, here is their main Golu - with three steps.. 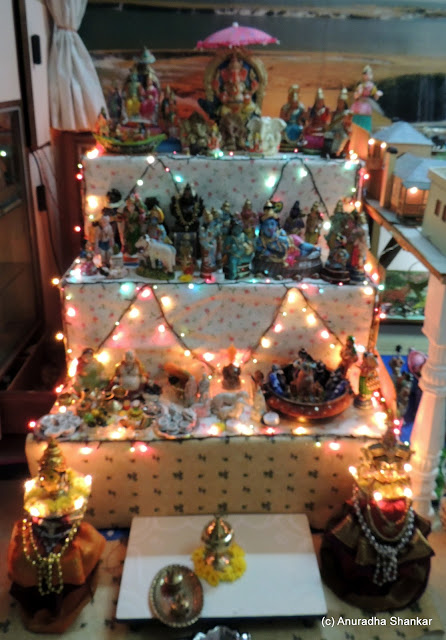 Let's take a closer look at each step... 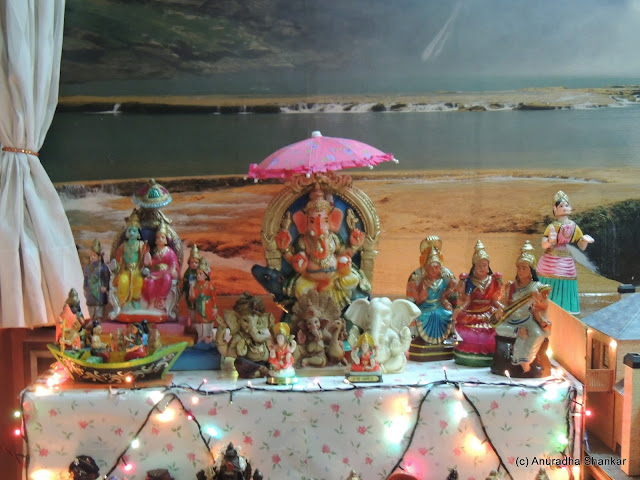 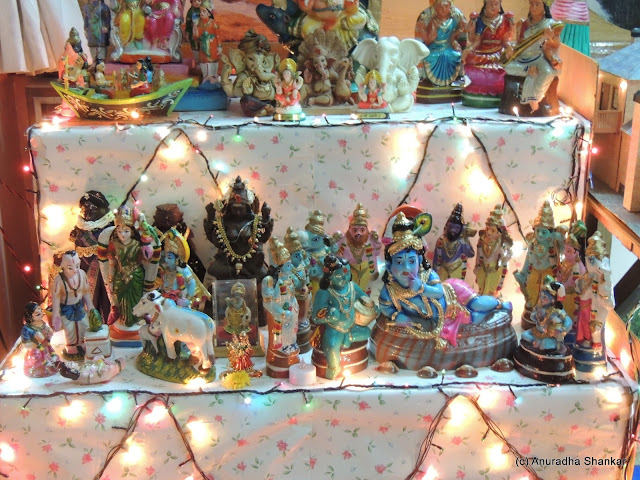 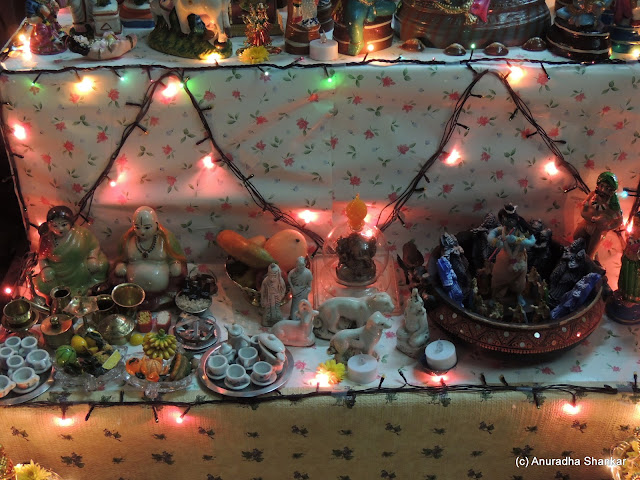 I have posted about his Golus earlier... in 2011 and 2010, and each year, he has managed to create something that is beautiful, and incredibly detailed, no matter what his theme. This year, he has replicated an un-named village in Kerala, complete with temple and all. Most villages with temples revolve around the temple, which is usually the most beautiful and detailed structure in the area. And so it is here, in his village too. The temple is a perfect scaled-down version of a Kerala style temple... 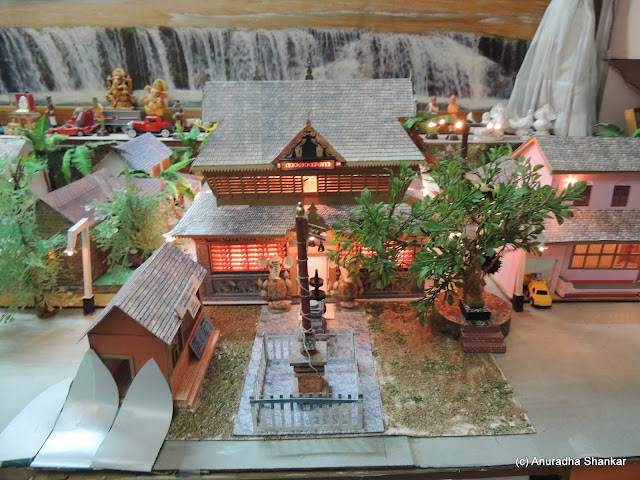 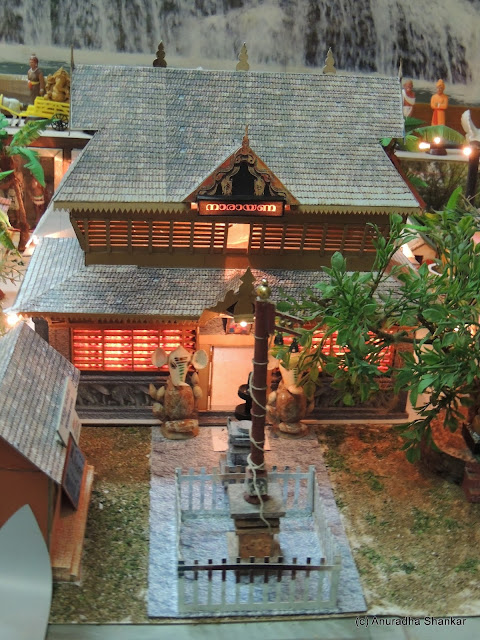 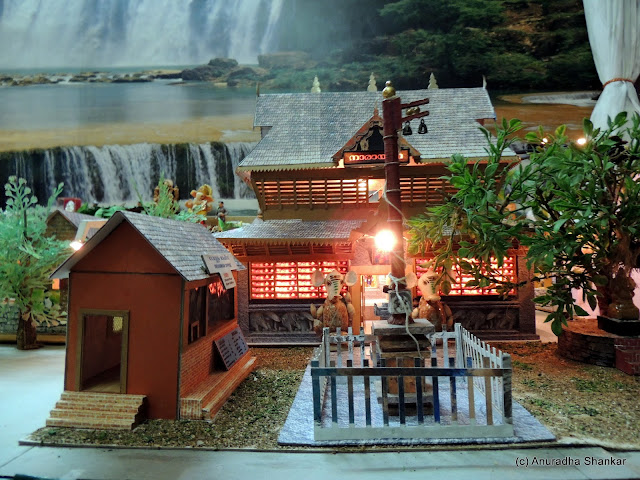 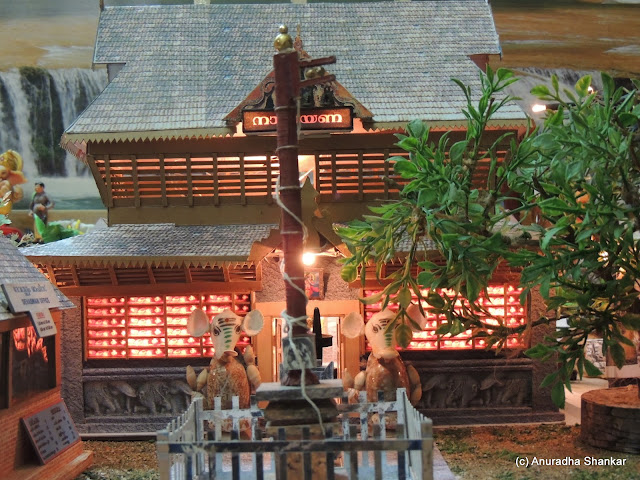 If the temple is the most detailed and beautiful structure, the houses are no less. There are so many types of houses in a village, and he has tried to show us some of the best... 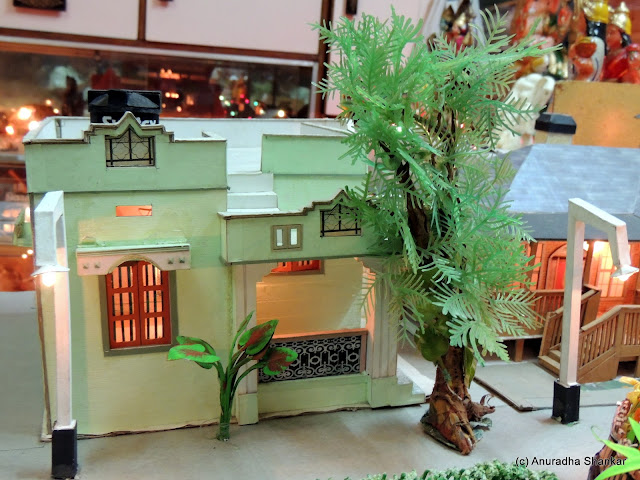 Under the table is another village....

Lately, I had been receiving a number of comments suggesting that such elaborate decorations and arrangements are not in sync with the actual idea of a Golu. Which is why I thought of adding a postscript to this post. This kind of creativity and details takes up a huge amount of time and energy... not to mention creativity and talent. It is not something which every one can do. However, isn't the whole idea of a Golu meant to celebrate the concept of creation? And what better way to express it than using our creativity? Besides, the idea of a Golu and its decoration probably originated with the idea of involving family members in what was a female centric ritual. From my personal experience, I can vouch for this. I have heard stories of my uncles visiting others' houses to get an idea of their creations so that they could use the ideas for future golus... and the prasadam, of course! I can see the same with Samhith, who comes along with me solely for seeing these. He has intelligent questions about how these are made, and how he can do the same.... and he manages to replicate things.. in his own way. That is, after all, for me, the whole idea of the festival for me.. getting my son interested in our culture and celebrations, and what he  can learn from it. Along the way, he learns so much, about our stories, about prayers, about detail, and above all, he learns to socialize too! I do not mean to say that everyone should make such detailed Golus. That is not just impossible, it also means nothing. However, what we can certainly do is appreciate the effort people put in, and put our own efforts to making the festival memorable, in our own way!