This is the third part of my series on our trip to Karnataka in October 2011. You can read my account of our visit to Sringeri here and the temples around Sringeri here.

Once our work at Sringeri was done, we headed out to Kollur..to visit the Mookambika Temple... To read my post on the temple, click here.

Heading back, we missed the last direct bus to Sringeri, and set out for Udupi instead. Going to Udupi and not visiting the Krishna temple there seemed like sacrilege, so off we went for a quick darshan at the temple. 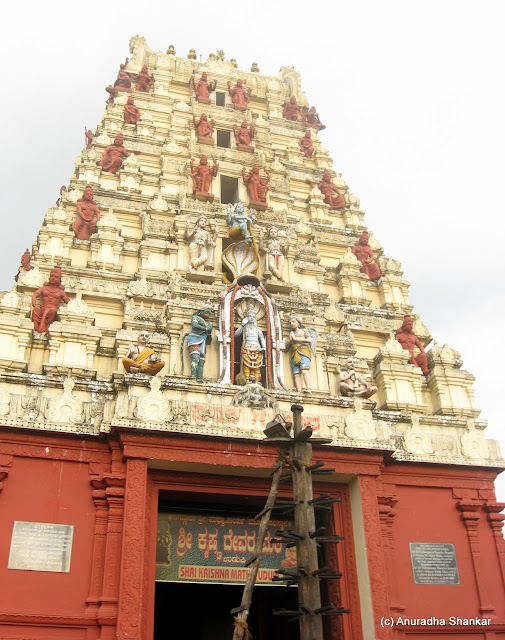 Udupi is the seat of the Sri Krishna Mutt, set up by the Vaishnavite saint, Madhvacharya. As the legend goes, sometime in the 13th century, idols of Lord Krishna and Balarama from Dwaraka were covered in sandal to such an extent that they were indistinguishable from sandalwood logs, and were mistakenly loaded aboard a ship carrying sandalwood. The ship was caught in a storm near the Karnataka coast. Meanwhile, the saint, Madhvacharya, who lived in this area, had a dream of Lord Krishna asking to be rescued from the ship. He hastened to the beach at Malpe, where, by waving his saffron robes, he guided the ship to safety. The sailors were so glad to be saved that they offered him anything from the ship that he wanted. Madhvacharya chose two logs – those containing the idols of Lord Krishna and Balarama. The idol of Balarama he installed at Malpe beach, in the Vadabhandeshwara temple. The Krishna idol, he brought to Udupi, and installed in his mutt there. It was he who set up the temple, and the method of puja there, which are being followed to this day. Madhvacharya handed over the charge of the temple and prayers to his 8 disciples, who went on to form their own mutts around Udupi. These 8 mutts are known as the Ashta Mathas, and they take turns in managing the mutt every two years. 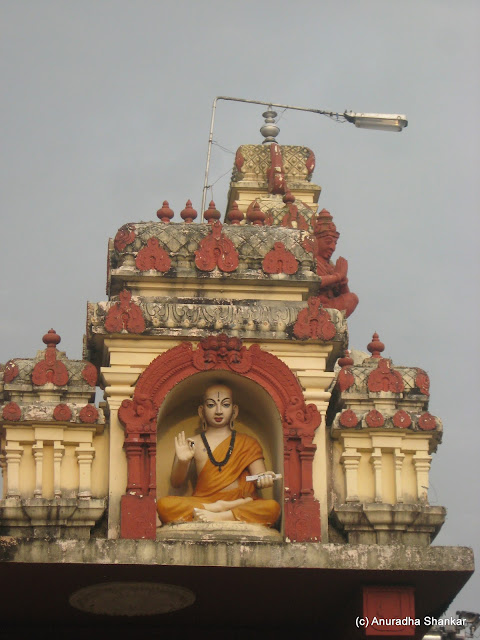 The temple is simple, but beautiful. The temple tank is a sacred one, where it is believed that the idol was immersed to rid it of all the excess sandal. 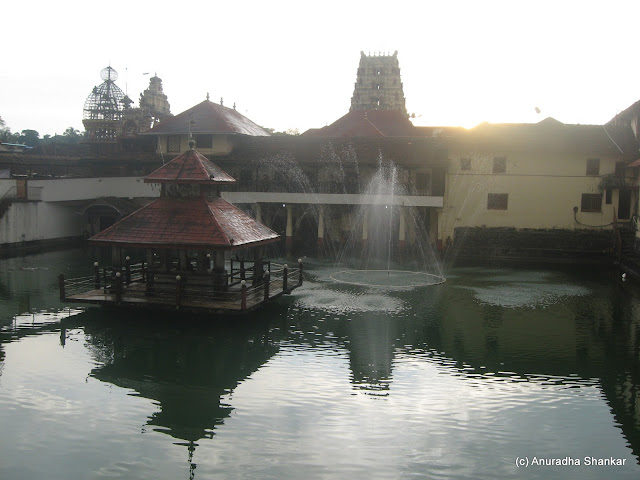 Another interesting story of the temple relates to Kanakadasa, in the 16th century. Kanakadasa was an ardent devotee of the Lord, but he was denied entry into the temple owing to his caste. Kanakadasa did not mind. For him, the thought of his beloved deity was far higher than the idol. He was content with a glimpse of the deity through a window at the back of the sanctum, even though all he could see was the back of the Lord. As Kanakadasa sang His praises, the Lord couldn't resist taking a look at his devotee, and turned. Thus He stands till today, with his back to the door, facing a window. And that is how we see him, through the window, which is called, appropriately enough, the Kanakanakindi – after the devotee whom the Lord himself wanted to see! 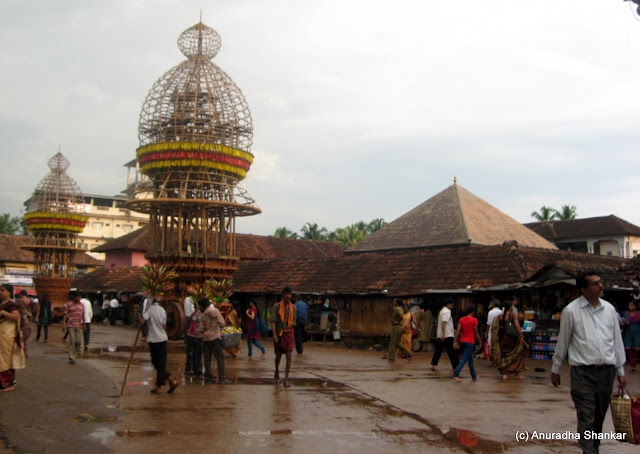 The Sri Krishna Temple is the predominant temple at Udupi, but the place is filled with temples, small and big. On this trip, we didn’t have time to visit them all. We had to hurry to catch a bus back to Sringeri, and we had a hectic day ahead. Little did we know that our day was far from over!!!!

Where to Stay: There is no dearth of hotels at Udupi, but the better option is to stay at one of the rooms built by the Mutts. There is also a huge tourist complex built by the Birlas, and many other similar options.

What to eat: The food prasadam offered by the Krishna Mutt is famous, both for the huge scale at which it is prepared and offered, and also for its taste. In fact, the typical south Indian fare available at hotels all over India so resemble the food offered at the temple, that these hotels came to be known as Udupi hotels, irrespective of which south Indian cuisine they served! While at Udupi, don’t miss having a meal at the temple. it is not just delicious and free, but it also brings with it, blessings of the Lord!