September 22, 2009
The third day of navaratri coincided with Id, giving us an extra holiday. Samhith’s exams starting on Tuesday meant that we were expected to use the holiday to catch up on studies, but we threw everything to the wind and spent the day at Thane, visiting my mom and Shankar’s aunt. Both keep beautiful golus and are extremely enthusiastic about the arrangements. Here are a few photos…..

First, at my mom’s place, here is the main golu….. 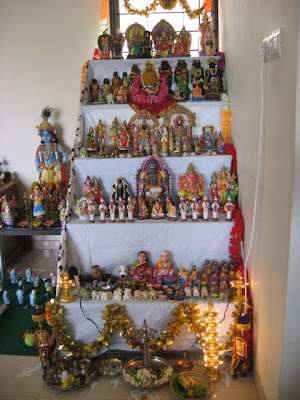 Look at the variety of marapachis on display! 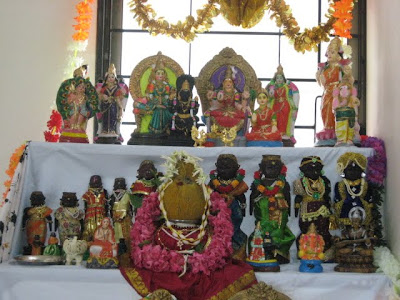 This is the newest addition to their kolu- a band playing music!!! 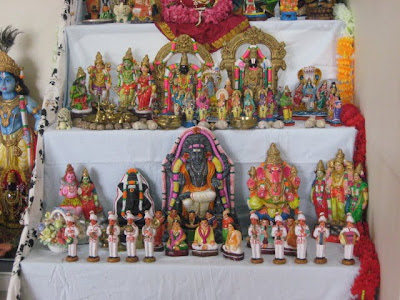 Here are some more toys kept near the steps due to lack of space on the steps themselves…. 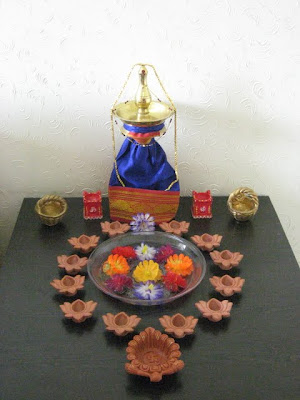 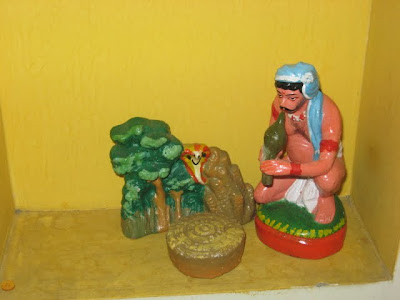 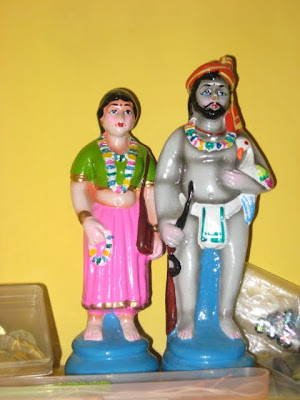 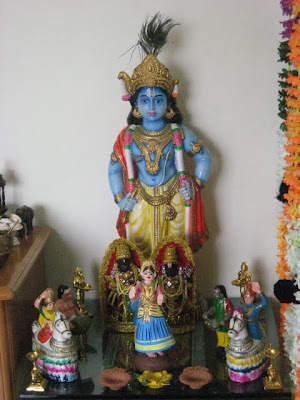 The Krishna is beautiful, isn’t he? The Panduranga and Rakumai in front are also marapachis dressed up! 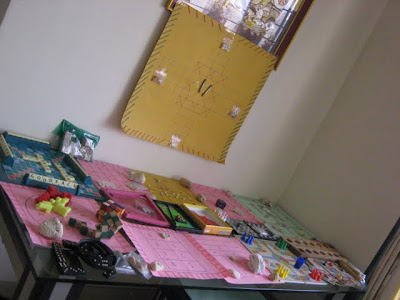 This year, they decided to have a theme based Kolu, and decided on Games, to begin with. Instead of using up the floor like I did, they have used the dining table for the other games – ancient Indian games….. there are too many of them to explain, so if you are actually interested in learning about these games and how to play them, I would refer you to the site Traditional Board Games of India which has done a great job trying to restore interest in ancient Indian board games.Here are a few of those on display.... 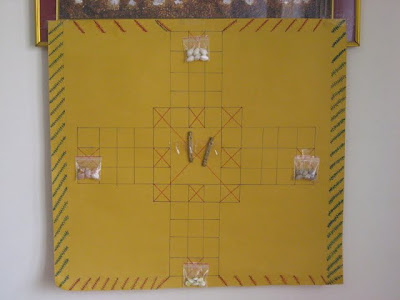 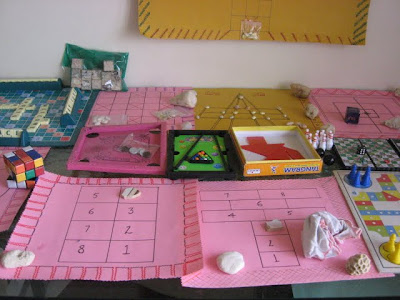 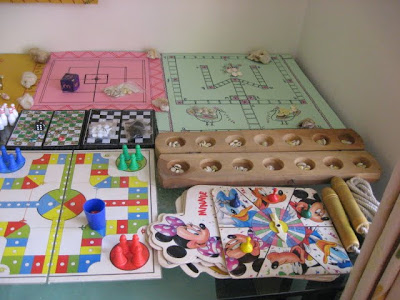 Here is the part with the outdoor games – cricket, of course, takes pride of place,…. 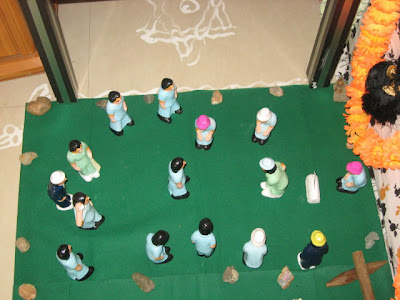 And here are a couple of others – gilli danda, pittu and marbles… 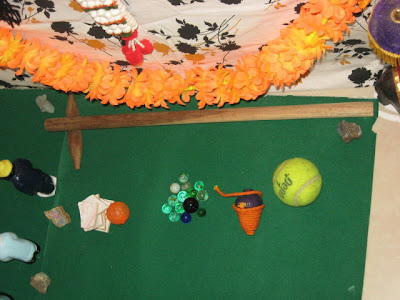 Finally, here is the decoration they have come up with this year……Plaits! Yes, all those are different kinds of plaits….. False hair plaited in various ways….. This again is an age-old technique fast fading into oblivion! 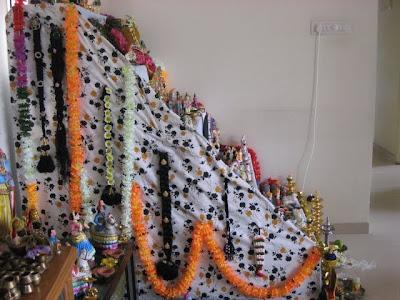 Moving on to Shankar’s aunt’s place, here is her Kolu, full of old and beautiful dolls. Personally, I would much prefer the old dolls to the newer ones. They are much more beautiful and detailed, unlike today’s mass produced ones, which barely resemble the gods/goddesses/scenes they are supposed to represent. 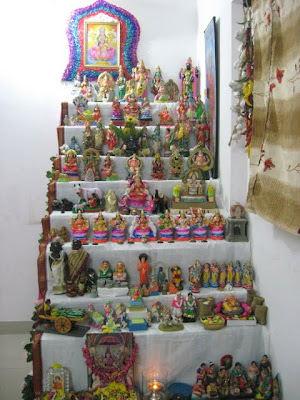 Take a closer look at some of the dolls, and you will see the work that has gone into each one of them, though they are now old and their colours are fading!

A Wedding in progress.... 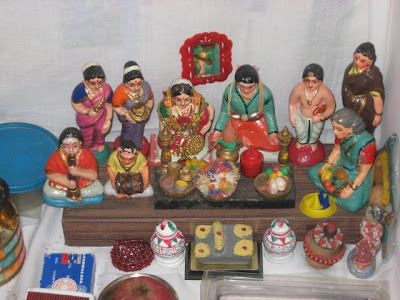 The rotund Chettiar with his wares..... 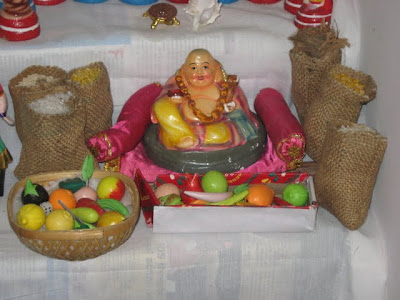 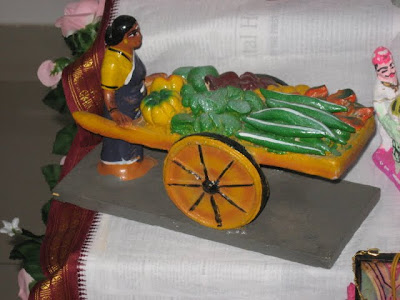 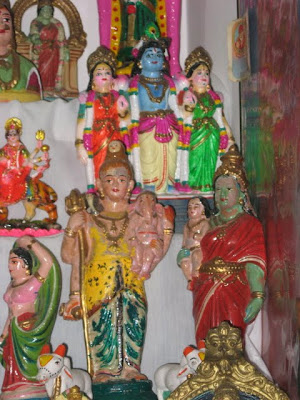 All faiths are one..... icons of all religions... from Christ to the Paramacharya, Adi Shankara to Sai Baba, and even one of Sathya Sai Baba.... This was my favourite part of this kolu... 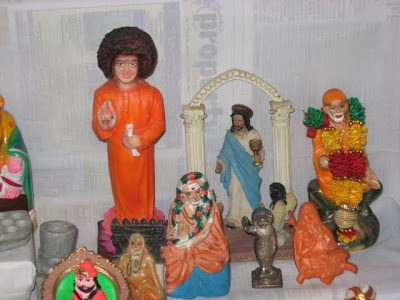 Last, but not the least, the decoration at the temple was that of Lakshmi – Hayagriva. Hayagriva was the horse-faced form taken by Lord Vishnu to recover the Vedas from the demon of the same name and form who had stolen them. Hayagriva is said to be the lord of learning and knowledge, an equivalent to Saraswati, so to speak. 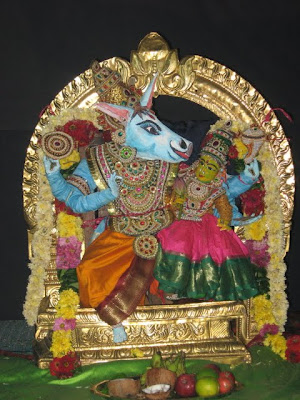 There were just too many photos to put on this blog, so here is a slideshow of all of them...