September 12, 2009
We Indians celebrate some festival or the other every month…… and in the peak festival season, more than one in a month. Apart from the big ones, we also have a lot of smaller ones, all of which have their own importance. Every puja in the house is accompanied by the special festive spread, the decorations and of course, the decking up in nine yards (for me) and festive wear (for Samhith)!

Imagine then our plight, when all festivals were cancelled post a death in the family, for a year! To make matters worse, another death postponed festivities for another year. At last, the period of mourning is over, and we can get back to the business of celebration!

No one is more thrilled than Samhith, especially since the first festival we shall be celebrating is Navaratri – the nine days and nights dedicated to the Devi. This festival holds a special attraction for him, since we keep the traditional “Bommai Kolu” – steps with earthen dolls kept on them.


Here are is a photo of the golu at the Fine Arts Society, Chembur, last year, a perfect example of what a golu should be. 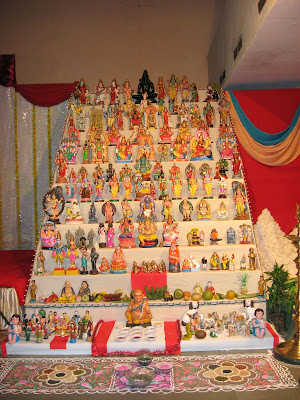 The toys kept on the steps too have their significance – they symbolize the creation of life, which is attributed to the goddess, and comprise samples of her creations – from humans and animals at the bottom level to characters from mythology and demigods at higher levels to gods and goddesses at the highest levels.


The second part of the golu is where scenes from everyday life are recreated. This is the part where children usually contribute their bit, and is certainly the most interesting part of the golu, especially as it changes every year! 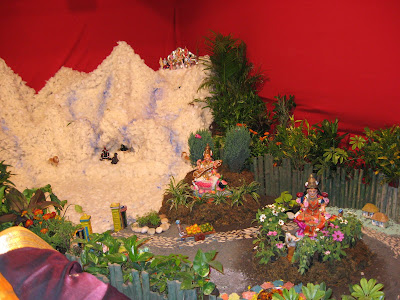 
This is what Samhith is looking forward to, and has great plans of making a city, complete with airport and railway station, and of course, his favourite animals in a forest……. Grand plans, wouldn’t you say, considering that he has his first brush with exams coinciding with the festival? Well, nevertheless, we are going full steam ahead with our preparations, keeping our fingers crossed, hoping that nothing happens to disrupt our plans.

There is exactly a week left for navaratri, and I am planning to write a series of posts describing our preparations, especially as it involved a lot of web-searching on my part, with interesting results which I would like to share with all of you.

The credit for this series of posts goes to Srivats, who has not just given me some great inputs and ideas, but has also been egging me on to write these posts! So, Srivats, this series is for you!

While I prepare my first post on the actual preparations, you can take a look at our last golu – which was a couple of years back. 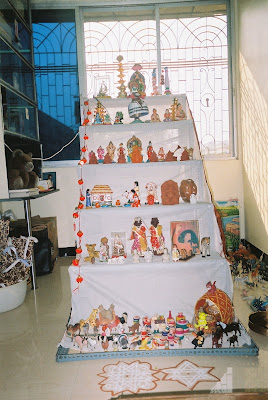 And here is Samhith’s contribution – all made with his toys! There is a river, lots and lots of animals (at last count they exceeded 200!) and even the sea….. Of course, the sea is contained within a small plastic tray, but it is absolutely crammed full of sea creatures – I had suggested laying them out on blue paper, but he vehemently opposed it! These animals were supposed to be in the water, not on top of it, he said! 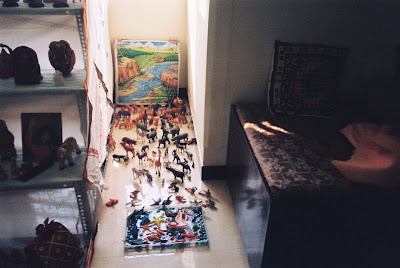 That was when he was a couple of years younger, so it was easy to convince him that the mountain and river in the background looked real enough. This year, though, is another story altogether! So, look out for the next few posts......

P.S. : If you have come this far, please do let me know whether you prefer my blog in its earlier format with the full post on the main page, or this one, where the "Read More" link brings you to this page. Is it visible enough? If not, do you have any suggestions about how I can improve it?
Festivals India Navaratri Navaratri 2009