September 15, 2009
Samhith enjoys Navaratri not just because he can make all these wonderful things and display them, but also because we leave them as they are for all 10 days! Left to him, once he makes something with his blocks, he would like to leave them just like that for ever- or at least till he gets into the mood to make something new. But with the space we have (or rather, I must say – lack of space), that’s not possible, and evenings invariably end with me pestering him to put his stuff back!

His idea for the navaratri is simple – we use up all his blocks, add a few trees, a river with some water, a mountain, some houses – and it’s done! Easier said than done, but that’s something he isn’t old enough to understand. So the first thing we had to do was arrive at a compromise – the Kolu (steps) takes the prime place at the centre of the area we have reserved (that’s one for me, and he gives up, but not without some grumbling!) and we are going to have his stuff on both sides – one side is going to be the urban one with an airport and city, and the other side is going to have a village and a jungle! This was one for him certainly, as I was planning to simply make it a jungle theme with his animals. But I had to give up, he wants to use his train set as well as his airport set – as he says, “People have to get to the jungle someway – so they fly to the nearest airport and take the train from there to the nearest village…” good logic, so I gave in!

One of the first things we had to look out for, once our plan was ready, were – trees – lots of them! After all, jungles need plenty of trees! Besides, the city should have a green cover too! So, while Samhith was at school, I went tree hunting. The first choice was, of course, to grow some plants and use them as trees, but that involves regular watering, and with a restless child in the house who picks up plants to show his friends, its not really feasible at the moment, so this time, we started looking around for plastic trees. My first choice was Crawford Market, where, after a lot of searching we finally found some Christmas trees – 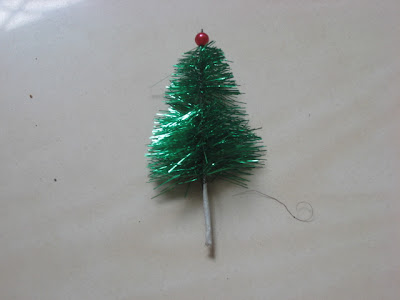 Then the family chipped in, and my aunt finally got a variety of plastic plants and flowers, and even one on a grid which is just great for the jungle. What a discovery! Now I can use these every year! No more tree hunting for me!!!! 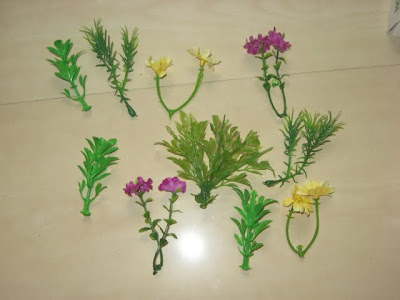 We have settled on green velvet paper for the grass and blue gelatin (or cellophane) paper for the river, but I still have to go out and buy all of them. Samhith has done his bit by helping me make a list of all the things I need to buy – since he can’t accompany me to the shop! 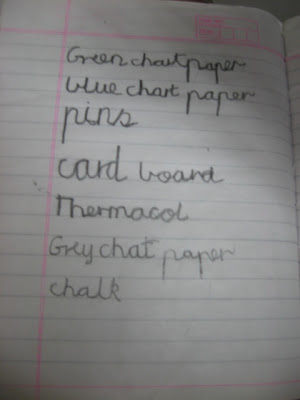 So that brings the preparations for the background to a close. All we have to do is make the actual houses and buildings needed to make the village and city. While the stuff Samhith has to make with his blocks are last on the list, to be made on Friday evening after he returns from school, we are in the process of making paper houses which you can look forward to seeing in the next post.

The next couple of days are sure to be busy ones for me, but I shall be back soon with Samhith’s creations for all of you!

P.S: I have reverted back to my earlier layout since the "Read More" link was barely visible.
Festivals India Navaratri Navaratri 2009