September 26, 2009
Shashti and Saptami passed by, as if in a dream, for it was full of visits. Samhith was thrilled with everyone coming home and appreciating our work.

The sixth day being Shashti, a special day for Karthikeya, the temple decoration was Skanda Matha – the mother of Karthikeya, who is also known as Skandha…. She is depicted here as giving her son the Vel – the spear – with which he proceeds to destroy the asuras Surapadman, Tarakasuran and Simhamukhan. 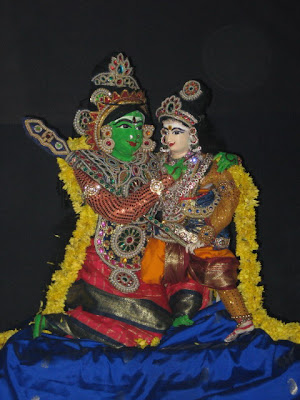 Saptami was on Friday and I had invited a whole lot of people home that day, Friday being an especially important day for the Devi. To welcome people home, I made a new Kolam to replace the earlier one. Here it is……. 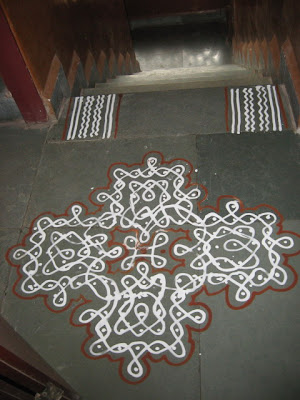 At the temple, the decoration was of the Devi as Sakhambari – covered with vegetables. 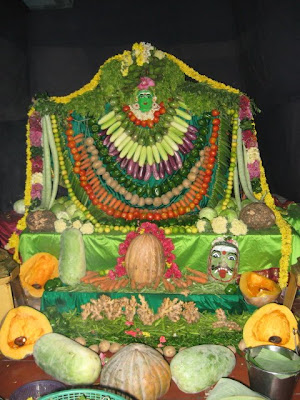 According to the Devi Mahatmayam, there was once a terrible famine, and the rishis prayed to the Devi for deliverance. In her compassion, she produced grains, vegetables and fruits from her own body to sustain the word during this terrible phase. It is then that she came to be known as Sakhambari. Usually, in all Devi temples, she is represented in this form at least once during the ten days praying that she will sustain us with abundant food for the whole year. 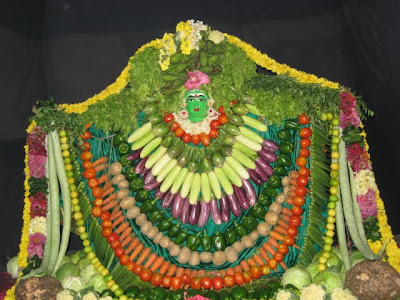