February 06, 2010
Maa-vilakku – literally, lamp made from flour, is an offering to the family deity. In our family, it is customary to make this offering on a Friday in the month of Thai (the month from 15th Jan to 15th Feb). Fridays in this month are considered auspicious, and even more so for us, due to this celebration. We put the Maa-vilakku yesterday, and it was even more special, since it was my birthday!
The Maa-vilakku is made from rice flour and jaggery. While in some houses, the two are mixed to form a dough and then shaped into a lamp, at our house, we simply spread the rice flour on a plate and then make the lamp with the jaggery and insert a wick in it. We then pour the ghee around the wick and then light it.

When the wick is almost burnt out, but not completely, of course, we take the wick out with a spoon and keep it aside and offer the mixture of flour, jaggery and ghee to the deity. These are then mixed with grated coconut and are distributed to married women along with vettalai-pakku (betel leaves and betel nuts – the traditional offering to married women).
The Maa-vilakku is believed to be an offering to the family deity, as a thanksgiving, and also a prayer for prosperity.
As far as Samhith is concerned, it is a feast, for he loves anything that has jaggery in it, eating not just the Maa-vilakku mixture, but also plain jaggery all day long. And even more interesting for him is the other offering we make to the deity –kozhakattai – Modaks!
Now you know what Samhith had for dinner last night!!! 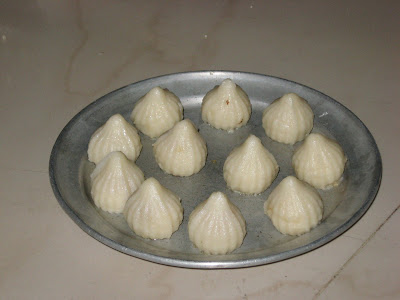