October 12, 2010
I ended my last post with a clay doll set of Lakshmi Kubera Puja. That was the first time I had seen that particular arrangement and was intrigued... Being the kind of person I am, I searched for more information, and learned so much more about the wealthiest God in Indian mythology.

Imagine my surprise when I saw the same arrangement at my colony temple today! Here is a pic for you..... 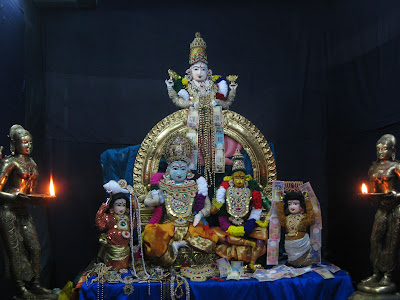 The male seated figure is Kubera, next to him is his wife Sittarini, over them is the Goddess Lakshmi raining wealth on them. Flanking them are two dwarapalas (those who guard the gates), who also happen to be the richest living beings! They are called Sanganidhi (the one depicted with a conch or Shankh) and Padmanidhi (the one with a lotus or Padma).
To read more about Kubera and the Lakshmi Kubera Puja, which is supposed to bring one a whole lot of wealth, click here. For those of you who would like to stay right here, here is an excerpt from the site...

Kubera is the God of wealth. He is also one of the Ashta-Dikpalas (guardians of the eight directions), representing the north. Kuberais the trustee of all wealth and food grains, whereas creation of wealth and bestowal belongs to Lakshmi. Kubera is the son of Visrava and is the grandson of Brahma. He is the Lord of Yakshas, devotees of Lord Shiva and is known as the best among Yakshas. His wife is Chitrini(sittarini).He is also seen with a golden mongoose as an auspicious symbol.

It is said that one who keeps this photo with Lakshmi Devi sitting above Kubera and his wife with gold over flowing from her hands will usher in great prosperity to the house.

Sri Lakshmi Kuberar Temple is situated at Rathnamangalam, a village near Vandalur, Chennai Shiva gave darshan to Kubera with Goddess Parvathi. Kubera was stunned to see the splendor and beauty of Goddess Parvathi. He felt sorry that he had not worshipped such a fine Goddess earlier and one of his eyes winked. Goddess Parvathi was angry that Kubera was seeing her with evil intention. She made his eye burst. Kubera lost sight in one eye. Lord Kubera requested siva to forgive him and pleaded that he had not seen the Goddess with any evil intention. Siva asked the Goddess to decide. Goddess Parvathi forgave Kubera and let one of the eyes grow smaller. So one eye of kubera is smaller that the other.

It is believed that when goddess Lakshmi visited Kubera, he managed to please her, so that she stayed in a pot of puffed rice covered with a sugar candy for several days. Thus he remained the richest celestial persona. To mimic this custom, small pots (in odd numbers) filled with puffed rice, coin and covered with sugar candy are placed for the Lakshmi kubera pooja along with the sparkling lamps. Later these pots are distributed to the visitors. It is believed that keeping this pot will bring good fortune.The connection of Kubera with Lakshmi is because of his notable propensity to collecting gaurding and distributing wealth and also because of the fact that he pleased Goddess Lakshmi with his devotion toward Her.

Interesting, wouldn't you say? Especially seeing the same image twice in a row, totally unexpectedly! Now, if only I would get lucky and actually get paid for an article, it would be proving that seeing this image does bring money, would it not?